While in Hong Kong we wanted to try atleast one tasting menu.  We also wanted the menu to reflect Hong Kong or Chinese cuisine in some way, so no pure European or Japanese restaurants.

It was actually hard to pick a place.  There are many highly acclaimed Chinese restaurants in Hong Kong, such as Lung Keen Hing, T'ang Court, Ming Court, etc.  However, their menus seemed to be far too classic and we wanted something a bit different.

We also looked into Bo Innovation, a 3 Michelin Star Chinese molecular gastronomy restaurant.  We ultimately decided to skip this as the reviews online were very hit and miss.  Either you would love it or hate it.  Opinionated About Dining's 2018 Asia list put this all the way at #200.

Eventually I found VEA, a Chinese-European mixed restaurant I found just by going to the website of every restaurant on the Hong Kong Michelin Star list. I immediately was won over when I loaded the restaurant's website and saw sea cucumber on the main page.  The restaurant is fairly new and doesn't have quite the international acclaim.  While it's listed on Opionated About Dining's 2018 Asia list, it wasn't listed on the 2017 list.

Here's an overview of the meal we had. 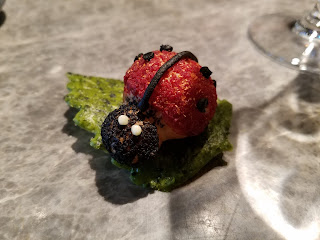 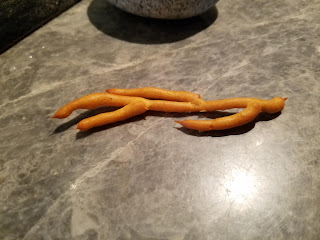 First up were these snacks that were sitting on the table when we arrived.  It includes a paprika "branch", spinach "leaf", and parmesan puff ladybug.  Obviously, the lady bug on the spinach leaf looks really cool. 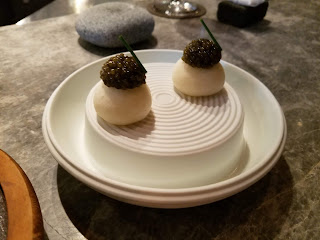 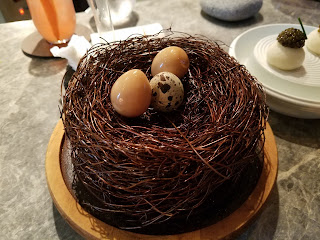 The next set of amuse dishes that arrived really begin to show off VEA's Chinese fusion elements.  First we had caviar, but instead of toast or crackers, it was on top of some Chinese steamed buns.  The soft bun with the caviar was a new and different texture compared to most other caviar courses I've had.

The second item was quail egg marinated in (I think) Japanese wine and smoked with apple wood.  I think this is their version of a "tea egg".  Overall, delicious with a creamy middle. 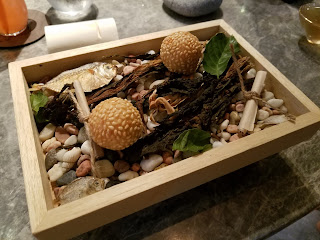 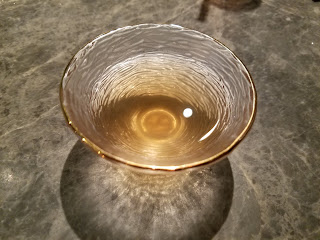 The third amuse was their version of a sesame ball, but with bok choy and salted fish in the middle.  Then bok choy broth to follow.  The bok choy broth was incredible, and I was initially confused how it could taste so good.  I believe its because it was made with dehydrated bok choy, which gives it a much more intense flavor. 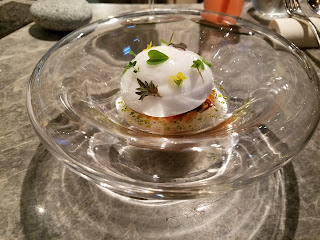 This was the first official course.  In the picture you mostly see tomato foam, but underneath it you have squid, shrimp, ikura, and tomato water.  What was most interesting about this dish is that the foam was served cold, which I've never had before.  It leads to this very refreshing dish that is a good change of pace compared to other menus I've had. 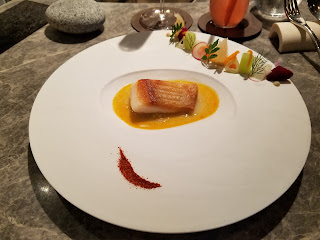 Next up we have a pan fried pomfret with fermented cabbage underneath.  This dish is spicy, and if you want to kick it up even more, you can mix in the spicy powder (I think chili powder).  Overall, with the fermented cabbage, really good.

Along the top right of the dish, there is a beautifully plated fruit salad, which serves as a palate cleanser of sorts after the spicy dish. 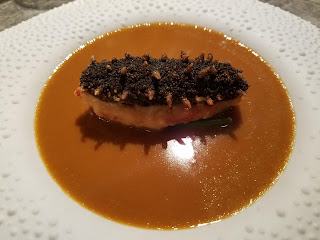 This was my favorite course of the night.  Beneath what you see in the picture above is red prawn, and below that is asparagus.  The sauce was made with prawn shells and eggs.  Some shiaoxing wine was sprayed on as well.  Overall, tons of texture, tons of flavor, it was just delicious all around.  This is the first time I've ever tried sea cucumber roasted, and I really enjoyed the texture more than the traditional stewed-Chinese form.

Before you finish this course, some rice noodles are offered up to soak up the remaining sauce.  You can see this in the picture below. 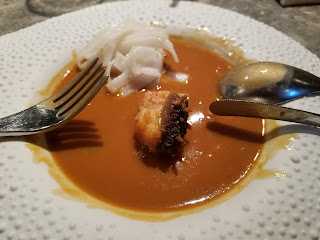 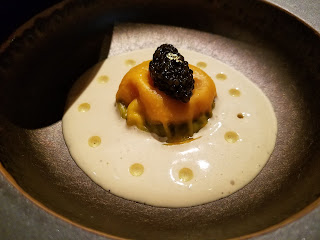 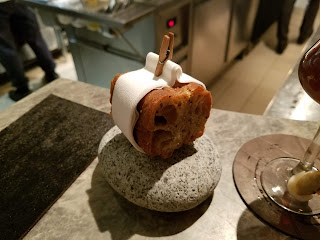 Next up we have a ravioli with creamy taiyouran egg yolk on the inside, some caviar on top, and a parmesan with truffle oil sauce on the outside.  They also offered up a truffled youtiao (Chinese donut) to soak up the parmesan sauce after you are done.

Overall, tasty with a lot of umami, but this dish sort of "threw me off" a bit.  Up to this point in the meal, the meal seemed very Chinese.  But this dish, minus the youtiao, seemed very western.  Perhaps it was because this dish was truffle and parmesan heavy.  Perhaps if the sauce was more soy based (i.e. think soy milk with youtiao), in my mind it would have matched a lot better. 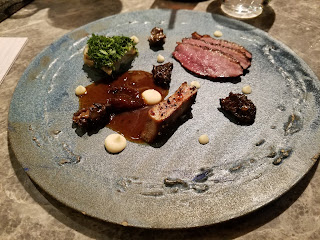 This dish is pretty awesome.  The goose was dry-aged for 14 days and roasted with sugarcane, which you can taste in each bite.  There was definitely more flavor in this goose than the one I had at Kam's Roast Goose.  You can see the morels on the plate, along with a chunk of cabbage, and a chunk of foie gras.

On looks, this is a purely western dish.  The Chinese element came in the sauce.  The fruit component for the sauce comes from a preserved Chinese apricot jam candy.  I initially assumed they made an apricot jam which replicates the candy, but they actually just flat out used the candy, which I think it pretty awesome.  They gave me a candy piece to try at home which was quite nice. 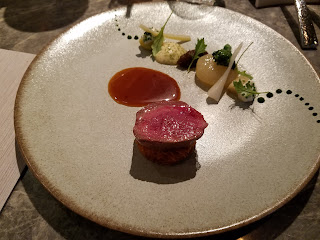 Underneath the lamb is egg noodle, which is probably the best egg noodle I've ever tasted in my life.  Apparently it's a semi-famous duck egg noodle from China.  It had way more flavor and umami then I recall having in egg noodles before.  The leeks are apparently a seasonal leek from some area of China, which I don't recall all the details of what the staff said.  Overall, this was delicious, lots of flavor and with the egg noodles some good texture contrast. 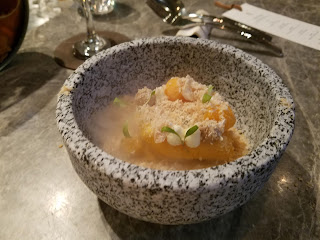 So I can't comment on this b/c I didn't taste it, given my tropical fruit allergy.  All I can say is there were two mangos in this, Taiwanese and Indian.  There were chunks and sorbet.  It is topped with some balls of yogurt, coconut, and peanut brittle.  The peanut brittle topping is in the same style you see in a lot of Taiwanese street food. 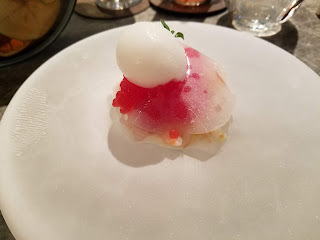 So this was my allergy substitute dessert, which had marscapone on the bottom, watermelon, some watermelon jelly balls, a lychee gelatin sheet, and on top was "stinky herb" sorbet.  The staff said there was no English word for this herb, but to trust them that it's not stinky.  They were correct.  I can't recall the flavor too well, other than the fact that I liked it.  All of this together was tasty and refreshing. 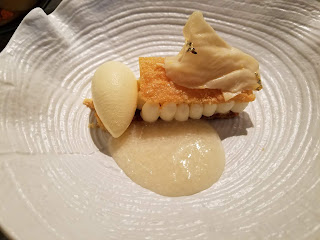 I had low expectations for this dessert when I saw it on the menu, because I remember a tofu skin dessert from Benu that I was not overly fond of.  However, this was delicious.  It's an attempt to deconstruct a traditional bean curd / barley Chinese dessert.  In this deconstruction, there are flavors of barley and gingko in the white cream-ish stuff, then around it is bean curd in ice cream, pastry, soft, and soupy-ish textures.  Overall, I really enjoyed this dessert.  A lot of good flavors and different textures. 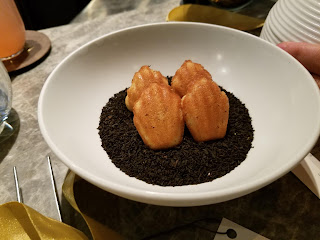 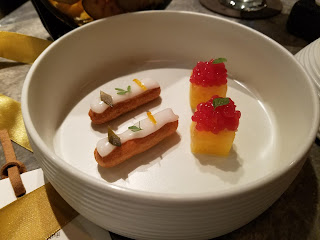 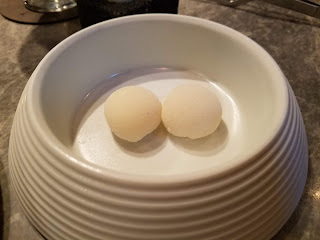 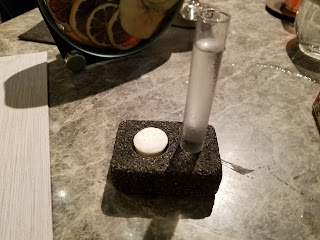 Finally, a ton of mignardise, again with many Chinese elements.  From top to bottom, orange & earl grey madeleines, mung bean eclairs, watermelon duet, condensed milk mochi (condensed milk on the inside), marshmallow with oolong tea.  The eclair with mung bean in the middle was my favorite. 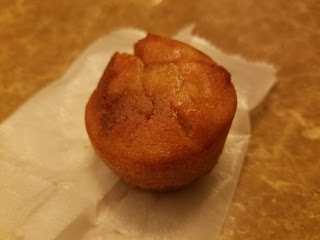 We got a snack to take home before we left.  I don't remember what flavor they said this was, something ginger-ish.  It was good snack for breakfast the next morning.

Before ending this post, I do want to mention that VEA offers a non-alcoholic cocktail pairing.  I appreciate it when restaurants have a non-alcoholic pairing option since it allows me to participate in the pairing. 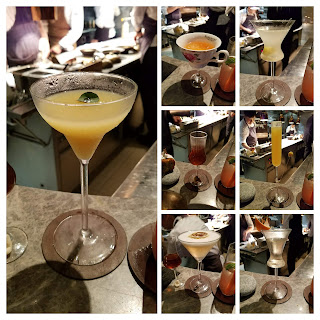 Overall, a great meal and one that will definitely crack my top ten all time.  As I was dining here, it reminded me a lot of my meal at Benu.  Both restaurants have a very strong Chinese leaning with their dishes, although I think VEA didn't sway quite as Chinese / Asian as Benu.

My initial thought when leaving this restaurant was, "I wish this meal leaned a little more Chinese", but then I had to realize that this restaurant is in Hong Kong and not San Francisco.  If it were to lean too far Chinese in Hong Kong, it might be viewed as a "weird Chinese restaurant".  I wonder how it would be different if the restaurant were set up outside of Asia.