When we traveled to Hong Kong, we got there semi-early in the morning.  We had to grab lunch at some point, but given how tired we were and how hot it was outside, we wanted to pick something really close by.  By nothing more than chance, we found Shang Palace, a 2 Michelin starred restaurant in the Kowloon Shangri-La.  We were able to get a seat without a reservation for a late lunch (had to wait around 20-25 mins for a table).  This was a weekday lunch, so I imagine it would be harder on the weekend.

There is a set menu for lunch, but we were not in the mood for a 5-6 course lunch shortly after flying in.  So we just ordered a bunch of interesting looking dim sum off the menu.  There were many dim sum dishes that looked quite different / higher end than what you can normally get at most dim sum places.  Here's what we had. 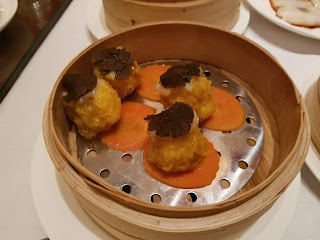 I pretty much ordered this only because it said conch was in the dumpling.  The picture on the menu showed a dollop of truffle paste, but this was clearly with a slice of truffle, which was nice.  Overall, pretty tasty.  Clearly different flavored than typical shumai with the mixed in conch and truffle. 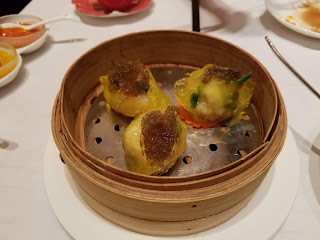 I ordered this almost exclusively due to the picture on the menu, having never seen a dim sum like this before.  The dim sum we had tasted more like shrimp than scallop, perhaps it was a tad different that day (the "skin" was also a different color than in the picture, so I assumed a different recipe for the day). 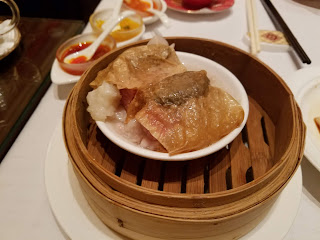 My +1 wanted this b/c she loves this dish.  Typically I think I've had this dish with some type of vegetable filling, but this was filled with a whole bunch of fancier stuff.  I felt like it was overstuffed though and could have been better without so many extras.  The chicken was really tender and the fish maw (fish stomach) was really interesting, super soft.  It had the consistency of something akin to the fatty part of pork belly. 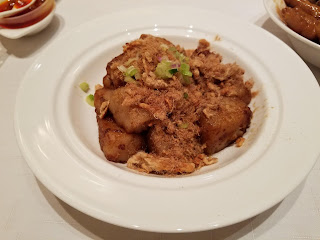 I ordered this because the picture on the menu looked way different than the typical "turnip cake" dim sum.  I thought maybe the turnip cake was sprinkled with something like bonito, but it ended up being dried pork / pork floss, which was interesting.

But what amazed me about this was the consistency of the turnip cake.  It was very soft and very "smooth" throughout, not as thick and with turnip "chunks" in it like I've had at most other restaurants.  I'm not sure if its pureed in or what.  Sorry, the consistency is hard to explain, but was really good.  This was probably my favorite dim sum of the meal. 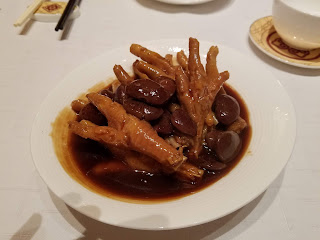 I've had the stewed chicken feet in black bean sauce many times, so I ordered this just because I'd never seen it served like this before.  First up, this is served with what I assume was kidney beans.  That was sort of interesting in and of itself.  In addition, when I normally ordered a chicken feet dish, it usually comes with around 3-4 chicken feet.  This one had like 8-10.  Way more than would be necessary for two people.  We struggled to finish this dish and ended up leaving one foot at the end of the meal.

I enjoyed this dish, as it was a different flavor than what I'm accustomed to, however I probably wouldn't order it again.  The chicken feet were harder to eat than what I was used to.  They didn't seem to have as much "meat".  I don't know if this is due to the cooking process, a difference in style of the dish, or a different chicken breed in Hong Kong with less fatty feet. 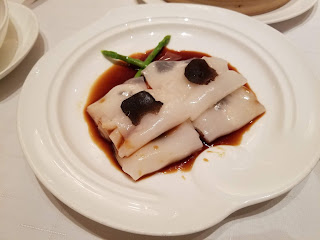 Shang Palace offers several rice flour rolls (I usually see it as "rice noodle" rolls in English), including one with wagyu beef.  However, I picked this one because I don't recall ever tasting or seeing one with scallops before.  I know I've definitely never seen / tasted one with truffle paste.

I really enjoyed this dish, it was probably my second favorite of the meal.  It was simply a tasty combination.

Overall, quite fun to try new dim sum.  With some tea and tip, it was a little under $100 US for two people.  Certainly pricey for dim sum and tea, so perhaps not something most want to do.
Posted by Albert Chu at 5:34 PM