Uncle Yu's is a nicer American style Chinese restaurant in Livermore, CA.  What do I mean by this?  You'll see white table cloths to go along with your kung pao chicken.  The restaurant advertises their attempt to purchase higher quality ingredients for all their dishes, which does come out when you taste them.  The restaurant also does wine pairings, although I've personally never partaken in it.

As far as American style Chinese restaurants go it's pretty good.  You're not going to find much here that's authentic Chinese except for maybe the peking duck.  It's a bit pricier than most, lunch combos are $12-$14 instead of the typical $7-$8 I get at other places.  Dinner entrees are priced up too.

I've been here a number of times for lunch and dinner over the years.  It's outside of the Michelin star, super hyped, or higher end fine dining type of restaurants that I normally blog about.  However, we were here for a friend's birthday and decided to try the 5 course tasting menu.  So I thought I'd write up about it for anyone who may be thinking of getting it and got here to my blog via Google trying to find out about it. 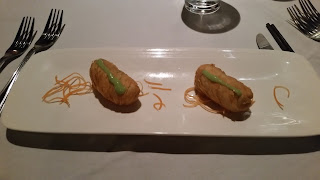 First up was these two salmon puffs.  Pretty good, although I wish there was a bit more avocado sauce. 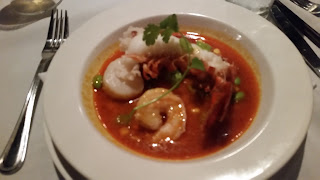 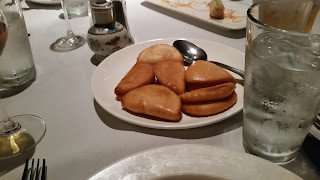 Next up was this "happy soup", which was a bit sour and spicy.  I didn't expect to like this when reading the description, but it was quite good.   I think tom yum soup from Thai restaurants came to mind, which I do not like.  However, this flavor was much better.  It came with some fried bao to dip into the soup.  I actually don't think I've ever had these bao fried before, only steamed before.  It being fried worked out much better for dipping.  Steamed bao probably would have fallen apart for dipping. 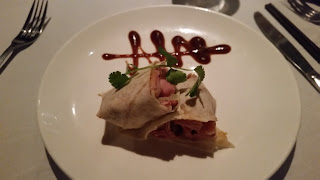 Next up was tea duck wrapped in pancakes with (what I believe was) some hoisin sauce on the side.  The tea duck was pretty good and not too dry.  A solid classic dish. 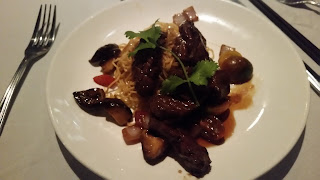 Next up was this stir fried beef tenderloin with mushrooms.  Also pretty good. 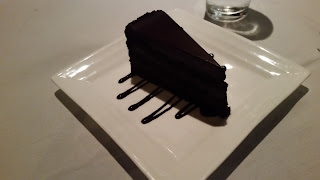 Finally some chocolate cake at the end.  At first I thought, "chocolate cake?", I thought they could have atleast given us a red-bean cake of some sort.  Oh well, this is an American style Chinese place.

Overall, a pretty good meal.  Obviously, I'm not going to try and compare this to other restaurants I've reviewed like Benu.  They are just not in the same category.  You aren't going to find any dishes here that are going to challenge your palate.

However, I probably would not recommend this for the price.  I can't recall the exact price, but I believe it was $60 a person before tax & tip.  As a comparison, the tasting at Al's Place is $60, the one at Kin Khao is $55, and the four course price fixe at Aster is $59.  The wine pairings at those restaurants are also cheaper.

So unless this is specifically what you're looking for, I would probably pass on the tasting menu.

I recently was able to hit up Mourad in San Francisco.  It's a relatively new restaurant from the folks that are behind Aziza.  It was given a debut of 3 out of 4 stars from the San Francisco Chronicle (very good for a restaurant that is just starting) and got a Michelin Star in 2016.

We were out to celebrate a friend's birthday and were intrigued by Mourad.  While it has a pricier a la carte menu (appetizers around $20, entrees around $35, and desserts at $12) and a tasting menu for $120, they also had something they call "la'acha".  It's a family style meal for the table.  They have several options such as lamb, short rib, and chicken.  The portions serve anywhere from two to six people.  Each also comes with several sides.

We decided to go for the duck family style option which they said served 2-3 people.  The family style meals take atleast 30 minutes to prepare, with the duck taking 45 minutes, so we got some appetizers first.  Since we got duck for our main entree, we got two seafood appetizers to share. 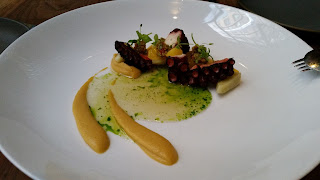 First up was an octopus appetizer.  You can see the little bits of artichoke beneath the octopus, bits of orange on top, and the chickpea spread in the front.  The waiter then poured a liquid which I believe he said was a lamb based broth.  I don't recall seeing merguez (which according to Google is a sausage).  Perhaps that was part of the broth.  Overall, this dish was delicious.  Been awhile since I had octopus that good. 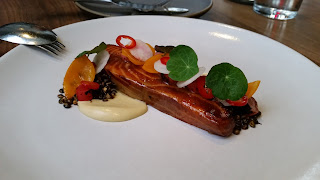 Admittedly, I'm not a big fan of salmon, however this salmon was delicious.  Smoked perfectly so it was still soft in the middle.  I had to look up what z'hug is, and it's apparently a spicy sauce originated from Yemen.  I assume that's what this was marinated in.  The lentils were toasted and on the bottom and gave this some texture differences.

Finally, the main course.  When this first came out, my first thought was, "This is for 2-3 people?  It looks like a lot."  However, I think the portions were perfect for three people.  The duck was already de-boned and stuffed with sausage (I believe they said duck sausage) before it was roasted.  You can see some dates near the bottom in a date reduction sauce and some of the mandarin oranges on top.  It came with the following sauces.  Overall, I think the dish was really good. 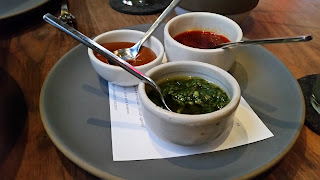 I remember the one in the upper left being a harissa sauce, the upper right being tomato based, but can't remember the bottom one, although it's clearly an herb based sauce.  I though all three were good, but I think the duck and the date reduction sauce was delicious by itself.

The following were the four sides that came with the duck.  Although I took close ups of the dishes, I hope they do not come across looking larger than they really are.  They were all relatively small, in probably "cereal bowl" size dishes.  Hopefully the utensils in the picture give an idea of the size of the bowls.  While they are tiny, they were perfect for three people. 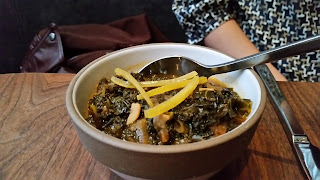 I'm actually not a big fan of kale, but this was really good.  The citrus I believe was lemon and I believe the chunks of yellow above were lemon rinds. 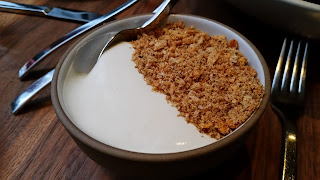 The beans were underneath the feta and bread crumbs in the this picture.  I had to look up za'atar, and it's is apparently some type of herb.  I guess it was in the beans. 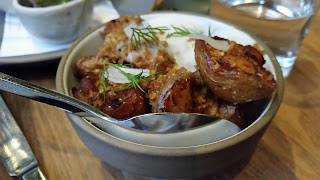 I think the waiter said there was chicken skin on the potatoes, which I couldn't quite pick up. 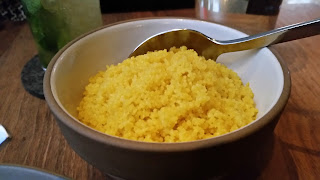 The waiter said this was cooked with preserved lemon.  This was really good.

My friend commented on the sides with something like, "These are really plain ingredients, but they are just tastier here."  I completely concur.  For some reason they were all tastier.

With the main course out of the way, we now work our way to dessert.  We didn't really share these so I can only really comment on the first of these three. 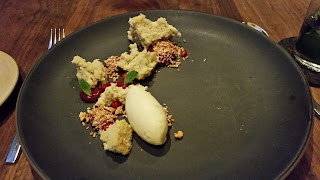 Overall really good.  You should be able to see the black currant red sauce throughout this dish and the coconut ice cream at the bottom.  There are some pomegranate sprinkled throughout too.  I'm not a fan of coconut flavor, however the ice cream was really good.  Not too strong overall.  The lavendar cake was really good, although I think there was too much black currant sauce overall and may have overpowered things a bit. 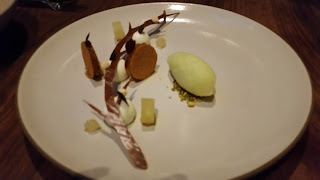 This dessert looked really pretty and the bit of apple sorbet on the right I tried was really good.  Unsure of what all of the components on the left were, but I believe there was marshmallow, wafers, and compressed apples along with the chocolate branch. 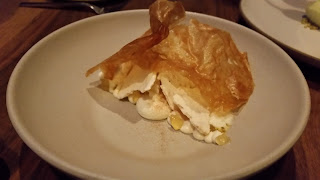 I tried a small bite of this but can't remember much, sorry.  There was some softer creamier stuff on the bottom, some crunchier stuff on top, and then what I assume was the honey-ish/beeswax-ish item on the top.

Overall a really good meal.  I would highly recommend for a group outing as the family style meal is a great deal and makes the meal not quite that pricey per person.

Posted by Albert Chu at 9:58 PM No comments:

Could Justice League Members be President of the United States?

Recently, I've been watching some animated films from the DC Universe.

With the 2016 Presidential election going on and the debate over Ted Cruz's candidacy given his Canadian birth, a funny thought popped in my head.  What members of the Justice League could be President of the United States?  In either their superhero or alter ego forms.

In order to be President you must meet three conditions:
Obviously there are various continuities and origin stories as well as different people playing the roles in the below.  The below is imperfectly based on the various origin stories told through the animated DC Universe.  In addition, ages of characters and how long they've been living in the US are somewhat unknown.

Superman - Born on Krypton, definitely not a natural born citizen.  However, as Clark Kent, he probably qualifies.  He's been working for awhile, so we'll say he's old enough.

Martian Manhunter - Born on Mars, definitely not a natural born citizen.  Alter ego of J'onn J'onzz probably couldn't prove he's been living in the US for 14 years though.

Aquaman - Born in Atlantis, definitely not a natural born citizen.

Green Lantern - AFAICT qualifies regardless if it's John Stewart or Hal Jordan, and assuming both are old enough and they haven't wandered off planet for extended periods of time.

Hawkman or Hawkwoman - Ugh, different continuities.  I believe in the animated series Hawkpeople are born on Thanagar, so definitely not a natural born citizens.  Other continuities have them as Earth born, so they'd probably qualify in that case.

Cyborg - Unlike some of the above, Cyborg has always been portrayed as very young, running around with the Teen Titans for a long time and is a highschooler in Justice League: War.  I think he's out due to age.

Atom - Ray Palmer has always been portrayed as a Professor, he's gotta be old enough to qualify.

What Is a Chinese Banquet Meal?

A few days ago I had a friend ask me about what goes on at a Chinese Banquet meal.  I thought I'd write up a short description.

Cold Plate - The first dish that typically comes out is a cold plate of various appetizers.  The items on this dish will vary, but slices of pork, chicken, and jellyfish are the most common items I've seen.  I've also seen wakame salad (seawood salad you usually see in Japanese restaurants), octopus, and duck wings.

Soup - The soup comes next.  I think seafood soup is the most common type offered although this may differ by restaurant.

Fowl dish - In my experience it's duck more often than chicken.  Peking duck or some variant is quite common.  Poached chicken with ginger sauce is common too.

Crustacean dish - There will typically be a lobster or crab dish.  I think lobster is more common.  Unlike most Western restaurants, these are typically cut up and stir fried (or possibly baked) so you get tiny chunks to dig meat out of.

Carb Dish - Either noodles or fried rice.  For those not too familiar with Chinese Banquet meals, you don't get rice with any of the prior courses.  I was told its because rice and carbs are cheap and a host wants you to fill up on the good stuff first.

Dessert - Of course varies by restaurant, but a sweet bean or rice based dessert is common.

If your party is a little on the large size, a few more dishes will be sprinkled in the middle to make sure there is enough food for everyone.

So as an example, here's a sample banquet menu from Mayflower Restaurant in Dublin, CA.  It follows my description nearly perfectly.