True story, my wife and I were watching TV when my wife asked, "What's Redhat?".  I then explained that Redhat was a company that (loosely) packaged open source software together and sold support for it.  Because my wife was familiar with Cloudera, I told her that it was the Cloudera of the Linux operating system world.

Then she blew me away by then asking, "Why would IBM want to buy them for $30 billion dollars?"

As a software developer that has worked almost exclusively on Linux in his career, it was a huge announcement.

After sitting back and pondering it for awhile, I was beginning to think about the move and it was a good move by IBM.

In my opinion, it is a great move for IBM.  But the probability of it being a success is low.

In one article I read, a Redhat engineer said: "I can't imagine a bigger culture clash."  I think that pretty much sums up the thoughts of myself and many other engineers.

Here were some differences I thought about after the sale was announced:
This of course doesn't even get into the fact that Redhat & IBM have different competing technologies.

I read a tweet (which I'm having trouble finding), but it said something to the effect:
and I'm going to add
It's a huge culture clash.

About two years ago I dined at Trestle and loved it.  For a very affordable price (nowadays $38 dollars), you can get a good three course price fixe meal.  For an extra $10 you an add an additional pasta course.  For San Francisco, it's a great deal for a meal.  It's regularly been listed in Michelin's Bib Gourmand listings for years and the San Francisco chronicle's top 100 restaurants list.

Here's what we had this time around.  It's worth noting that you can request some bread, but we had a late lunch and elected not to have any. 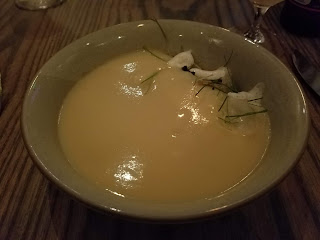 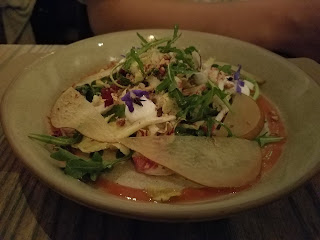 I had the soup on the top while my +1 had to the salad on the bottom.  The soup was rich, hearty, and delicious.  There were potatoes, creme fraiche, and caviar in the soup.  My assumption is that potato was used as the thickener for the soup as well.

Unfortunately, I can't comment on the salad as I didn't try it because I'm allergic to guava. 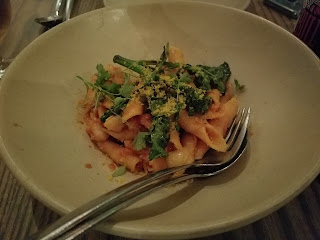 Not much to really say about this dish, as it was good.  The pasta was perfectly al dente. 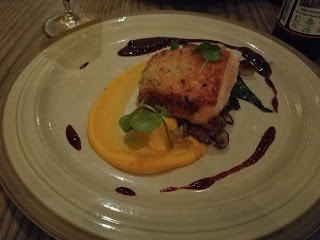 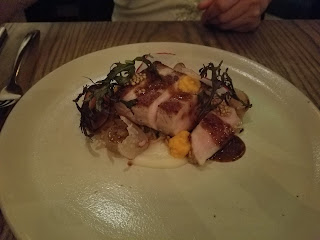 I had the salmon on top while my +1 had the pork loin below.  Just like my last visit to Trestle, the salmon was absolutely amazing.  It was barely raw in the middle and perfectly soft.  The ginger / scallion crust was crisp and added a good hit of flavor in the middle of bites.  This is despite the fact I'm not a big fan of salmon.  (Although, at some point, I'm going to have to realize that my general dislike of salmon may simply be that I need to have really good salmon more times.)

Of the few bites of pork loin i tried from my +1s, it was also quite good, although not quite as good as the pork loin I had from a recent trip to aina. 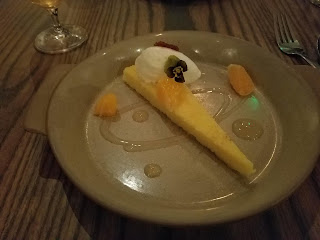 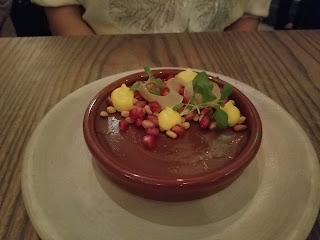 I had never had polenta as a dessert before, but this the polenta cake was delicious.  I'm having trouble describing the texture, but it was certainly something I hadn't had in a dessert before.  Along was the citrus sauce and orange chunks on the side, it was delicious.  My immediate thought was I had to try and bake this at home.

The milk chocolate custard below was also good, although I felt it was a bit rich after a few bites.

Overall, another great meal at Trestle.  Can't wait to hit it up again.  It's worth noting that we were in and out of Trestle in about 1.5 hours.  So it's a pretty quick meal as well.
Posted by Albert Chu at 7:27 AM No comments: