The NBA Turning Into A 3-Point League

Stephen Curry and the Golden State Warriors are off to an amazing 38-4 start to the 2015-2016 season.  Stephen Curry is undoubtedly been the NBA's MVP during the first half of the season.

The statistic I find most fascinating about Stephen Curry's run this year is the number of three pointers he's shooting.  As of this writing, he's got 193 three pointers on the year.  That's good for a pace of 376 over 82 games.  Keep in mind, he missed a couple of games due to an injury earlier in the year.  For a good part of the year prior to that injury he was on pace for over 400.

Regardless, any of these numbers will completely shatter the NBA record for three pointers in a season, which Curry already owns.  He had 286 three pointers last year to set the record.  That beat his prior record of 272 which he accomplished in 2012-2013.  With 261 in 2013-2014, he owns three of the top five three point shooting seasons in NBA history.

The change in the game can be perhaps be illustrated best by looking at Michael Jordan's early career.  Debated as the best basketball player of all time, but minimally the best shooting guard of all time, some of Jordan's pre-1994 three point statistics can look comical by modern day measurements.

Later, Jordan's three point shooting grew just as it did for the rest of the NBA, but it's comical looking at some of those early numbers.

Posted by Albert Chu at 8:01 PM No comments:

Recently the famed New York restaurant Per Se was demoted to two stars by the New York Times.  It got a lot of press online and went mini-viral.  The review reminded me a bit of the commentary that went around after the restaurant Daniel in New York dropped from 3 Michelin Stars to 2 Michelin Stars.

I've been a fair number of dining adventures the past few years and have hit up many restaurants after my trip to Per Se's sister restaurant French Laundry.  Over that time, I've come to an understanding on fine dining and restaurants.

In my opinion, restaurants sway in one of two directions.  Either they are "classic" or "hip".  "Hip" can be interpreted multiple ways, perhaps "new age" or "interesting" would also suffice.  Individual dishes fall into the "classic" or "interesting" category as well.  Basically what it comes down to is if the restaurant is trying to cook you a perfect recreation of a classic dish or trying to do something really different or interesting.

A few of the restaurants I've been to that remind me of the "classic" category are Chez Panisse, Alexander's Steakhouse, and La Folie.  French Laundry perhaps sways towards the classic end.  A steak from Alexander's Steakhouse is a wonderful example of a "classic" dish.   There is nothing truly creative about this particular dish.  They procure the best steak they can and then cook it to perfection.  The lamb from French Laundry, duck from La Folie, and the pork loin from Chez Panisse also come to mind.  Classic ingredients cooked to perfection and in a relatively classic fashion.

A places that immediately come to mind on the "hip" or "interesting" end would be State Bird Provisions and Al's Place.  Saison, Benu, and Commis probably sway towards this end.  Here there are dishes you generally cannot find anywhere else because they are quite unique.   The lobster coral xiao long bao from Benu is the one that immediately comes to mind.  You can't find this dish probably anywhere else in the bay area, or possible even the whole United States.  The hearts of palm salad from State Bird Provisions and radish snackle from Al's place also come to mind in this category.

So there in lies the rub for higher end restaurants and reviewers.  How do you grade a restaurant that serves "classic" fair vs a restaurant that serves "hip" fair.  Restaurants serving "classic" fair may be limited in the types of dishes they serve.  With the case of French Laundry or Per Se, there are such classic dishes that customers expect, they can't really take them off the menu.  If "classic" restaurants cannot take them off the menu, how can they create new dishes?  If they cannot create new dishes, will they fall behind other restaurants?

Posted by Albert Chu at 7:27 PM No comments:

Al's Place has been one of the most hyped restaurants of 2015.  The head chef was formerly the head chef a Ubuntu in Napa, a two Michelin star restaurant before it closed.   It was named the best new restaurant of the year by Bon Appetit and just got a Michelin Star.

The restaurant reminds me a bit of State Bird Provisions.  It is a very casual place for a Michelin star restaurant, with some folks dressed in jeans and t-shirts.  A portion of the restaurant is reserved for walk ins.  We saw a line of people lined up well before the restaurant opened (just like State Bird).  A large number of people were waiting outside waiting for a seat.  The price is comparable.  Reservations are also difficult due to the hype.  However, I got pretty lucky with a reservation that opened up < 24 hours earlier.

Right now Al's Place offers an a la carte menu or a "Family Style" menu for $60. The latter is simply the restaurants random picks from the menu.  Normally, I always go for the tasting menu/chef's picks from the menu, but I didn't this time as will be explained below.

Al's place is somewhat famous for concentrating on vegetarian/pescatarian dishes.  The menu is divided up into 5 sections, "Snackles" (snacks), "Cold/Cool" dishes, "Warm/Hot" dishes, "Sides", and "Limited Availability" dishes.  With the exception of one or two dishes, all the "Snackles", "Cold/Cool", and "Warm/Hot" were vegetarian.  A large number of the dishes in these sections would probably even qualify as vegan.  However, this isn't a vegetarian restaurant, as a number of meat dishes are available under the "Sides" or "Limited Availability" section.

The "Family Style" only covers items from the "Snackles", "Cold/Cool", and "Warm/Hot" dishes.  So if you wanted to get anything with meat, you'd have to order extra items.  So we elected to just order a whole bunch of dishes from the a la carte menu to ensure we got a few meat dishes.

Here's what we had. 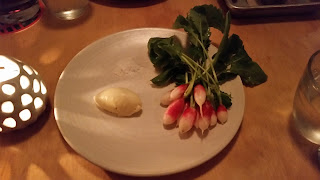 It's a little hard to tell in the picture, but above the scoop of butter was a pile of salt.  We were told to dip into the butter and sprinkle salt on.  I just dipped the butter into the salt instead.  Also, you ate the radishes leaves and all, which was new to me.

Overall, delicious.  I can't quite put my finger on why it was, but I've never had an dish quite like this before.  The radish leaves were certainly a good part of the equation as it had a bit of (I believe natural) spice to it. 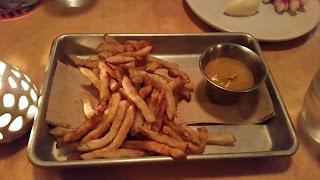 I normally wouldn't go for such a dish as french fries seem quite generic.  However, my date insisted since we just finished a hike and she really craved some fries.  Overall, the apple sauce was tasty.  I probably wouldn't get this dish again though, as I'd want to try some dishes that were really different. 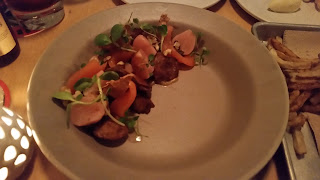 I had to look up bagna cauda, which is apparently a dip of some sort which originates from Italy.  I wasn't entirely sure what "smashed turnip" was, but it appeared to be pickled in some way.  Overall, this was probably my favorite of the night.  All of it together was delicious. 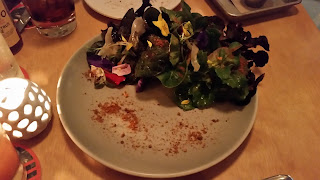 Before coming to the restaurant I read on Yelp that this dish was to be eaten with your hands.  I didn't understand why until I started poking at the dish.

From the picture, it looks just like a pretty normal salad.  However, the "baby lettuces" in the title of this dish are not actually leaves from baby lettuces.  They are the entire head of the lettuce from a baby lettuce.  So the above is not a bunch of lettuce leaves but was around 8-10 baby lettuce heads, of atleast two different lettuce varieties.  Underneath it all was the herbed avocado sauce, which you can see better in this picture below (along with a lettuce head).  So it's actually easier to just grab a head of lettuce and dip it in the sauce. 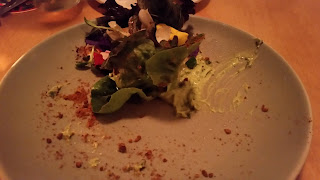 This dish was awesome, the most unique and delicious salad I think I've ever had. 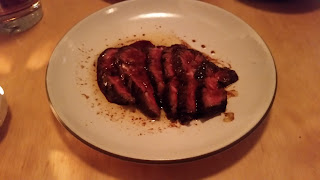 I'm actually not a fan of steak cooked rare, for some reason it just tastes too "uncooked".  However, this was very tasty.  I'm sure it has to do with the fact this steak probably wasn't from Safeway.  It was also cut so thin that perhaps that rareness wasn't evident.  Overall, very tasty.

It's worth noting that overall this wasn't a lot of steak.  Maybe on the order of 5-6 ounces worth.  Just to keep that in mind for anyone that would want to order it and if you're sharing. 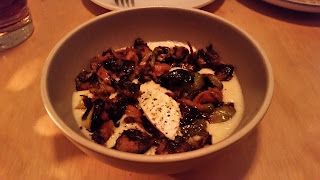 This was the lone dish we ordered from the "Warm/Hot" section as we didn't want to share a soup (2 of the 4 dishes in this section) and the other dish was a pasta (we didn't want two warm carb dishes).  I assume the "yellowfeet" was yellowfoot mushrooms (Googling "yellowfeet" was not pretty).  Overall a very tasty dish.  I think the quince in the grits was what really stood out to me.

7) fish head under a brick, sweet+sour 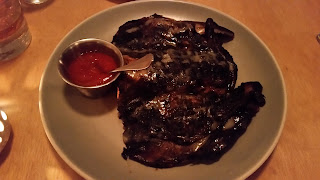 We ordered this dish almost exclusively because we were curious what "under a brick" meant for cooking something.  Effectively, this is a fish head (we didn't ask what kind of fish), sliced vertically so its flat, and put under a brick while it was grilled.  It comes with some kim-chi sweet & sour sauce on the side.

I had actually expected some Chinese takeout like sweet & sour sauce, but this was much more mild and had some type of kim-chi flavoring in it according to the waiter.  Overall, the sauce was quite tasty.

While the fish was fine, I wouldn't get it again.  You have to really dig around to find the meat.  If this fish head were perhaps steamed, I think it'd be more clear what parts of the head were available to pick off meat because the fish head would still look like fish.  However, because it was grilled and there's so much black char on it, you're sort of just poking around trying to find meat.

Then on to dessert.  We ordered two of the three desserts available. 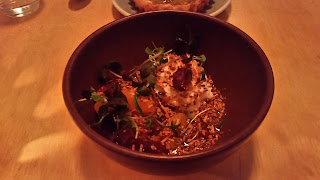 It may be a little hard to tell in this picture, but the white is the coconut, which was a bit airy.  I assume it was coconut whipped or moussed or something like that.  I had to look up what swarnadwipa was, which is an Indian spice of some sort.  Included amongst the citrus that we could tell was tangerine, blood orange, and grapefruit.  If there were other types, I couldn't figure it out.

Overall, this was a nice light dessert. 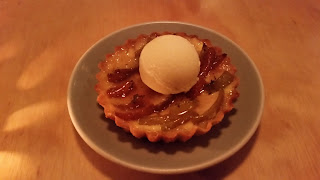 Looking at the pear tart, it seemed like there were atleast two different types of pear in this tart. Really good.


Overall, I loved the meal at Al's Place.  It's definitely one of my favorites in recent memory and one of the few that I think met the hype it's associated with.

Posted by Albert Chu at 9:27 AM No comments:

The NFL growing into a pass heavy league

Looking through the final NFL 2015 stats, I found something stunning.

As a comparison, in 2001, only 3 players threw for 30 touchdowns.  Throwing for 20 touchdowns ranked you as 10th best in the league.

Here are the number of 30 TD passers the league has had each year since 2000.

As you can see, it's been ratcheting up this decade and especially the past few years.  It's hard to believe that in 2002 there wasn't even 1 quarterback that threw for 30 TDs.

Here's the total number of touchdowns thrown in the NFL during that same timeframe.

Posted by Albert Chu at 8:16 AM No comments: