So when I was looking up restaurants to try while I was visiting Hong Kong, one of the restaurants that came up on several lists was Kam's Roast Goose.  It's a family owned restaurant that has specialized in roast goose and other various barbecued meats for 3 generations.  The restaurant is so well regarded, that they even got a Michelin Star in 2015.

The restaurant is a pretty average looking restaurant in Hong Kong's Wan Chai district.  They don't take reservations, so you should expect lines during busy hours.  We walked by at noon and there were a ton of people there.  We came back around 2pm and the line was noticeably shorter.  It took us about 30-40 minutes to get a seat.  By the time 3:00pm-3:15pm, you could have walked in and gotten a seat without waiting.

The menu is basically broken up into their bbq specialties, which you can get alone, over rice, over noodles, or in soup.  They also have a number of sides you can get.  This is what we got.

1) marinated cucumbers with chili and garlic 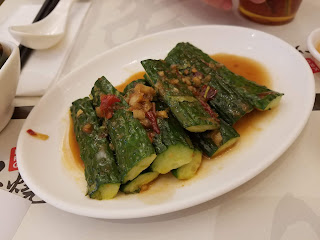 We ordered this just so we'd have some vegetables as part of this meal.  Compared to other places I've had this dish, there was an extra hint of chili and garlic in the dish.  Better than the average I've had of this. 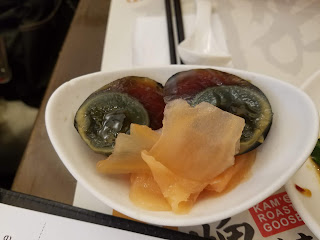 We ordered this because everyone around us was ordering it as well.   I normally dislike preserved egg, but this was pretty good.  It was far more creamy than the typical stuff I've tried before.  The pickled ginger was also really good. 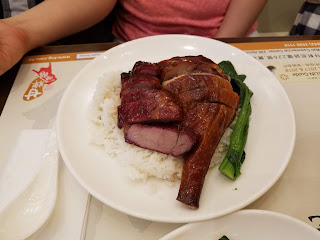 I've never had roast goose before, so it's hard to really judge it.  It didn't seem to have as strong a flavor as duck (which is what a number of others online agree with), but I did enjoy the crispy skin.

What surprised me about this dish was the bbq pork.  It was insanely tender compared to what I've tried before.  I believe it's a different cut of the pig than what most places do.  Perhaps tenderloin?

Overall, the meal was $232 HKD (about $30 USD at the time of this writing).   We got the three dishes above, one extra goose leg over rice dish, and 2 non-alcoholic drinks.  It's a great deal for a 1 Michelin Star meal.
Posted by Albert Chu at 9:49 AM