While in Seoul we wanted to go on a food adventure. Unlike Hong Kong (but similar to Tokyo), it seemed to be harder for a non-local to get reservations.  While its not surprising to find restaurants without English on their website, I found it even more surprising that a nice chunk of restaurants didn't even have websites.

So with some English and minimally e-mail reservations a requirement, as well as getting a meal that is Korean or Korean fusion (i.e. no pure Japanese, Chinese, or European food),  I eventually got reservations @ Mingles.

For anyone who may be wondering how I got reservations, I e-mailed Mingles via the e-mail address on their website.  They take reservations 1 month ahead of date on the 1st of the month (i.e. for a June 10th reservation, you can e-mail them on May 1st).  From what I read online, reservations can be hard, so you should e-mail them early.  There's a $100 USD deposit via Paypal for reservations.  You are refunded this deposit when you show up.  In addition, about 48 hours ahead of your reservation, you have to e-mail them to let them know you're coming (i.e. b/c you probably don't have a local phone number for them to re-verify the reservation).

The menu at Mingles is a set tasting menu with a few options for the main and dessert.  There are also some additional courses you could pay more to simply add on.  I wanted to try the extra courses but wasn't sure if it would be too much food.  The waiter recommended we share these additional courses so as to not get too stuffed.  Of the extras, there was 1 consomme / vegetable dish, 1 noodle dish, and 1 broth / noodle dish.  We ordered the first two to avoid too much cross over (i.e. not two soups, not two noodles).  But I think we could have ordered all three and still not left overly stuffed.

Here's what we got. 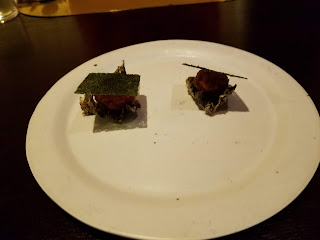 The first amuse course we got was beef tartare.  It was set in between two different seaweed crackers, one sweetened and one not.  A good amuse, a nice texture difference and the sweetness from the second seaweed didn't overpower. 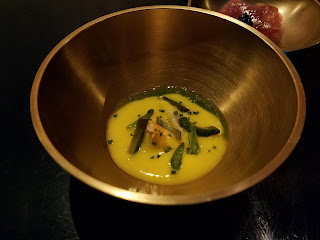 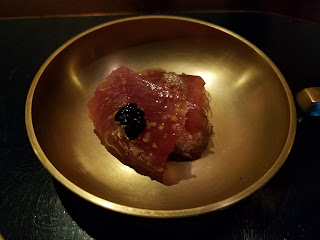 The next set of amuse dishes started off with a corn soup, with crab and some type of vegetable.  I'm not sure what kind of vegetable it was, but I really enjoyed it. 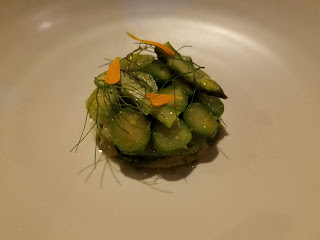 This was the first official course on the menu, with clam underneath this pile of asparagus.  The staff said the pesto was made with some korean herb that I don't know.  Overall, tasty and a good refreshing dish. 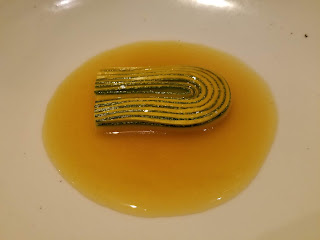 This dish was one of the two extra courses we ordered.  It's small enough that we probably should have both gotten one instead of sharing it.  It's some cleverly plated zucchini (two types) in a consomme of zucchini and pumpkin.  Good and light. 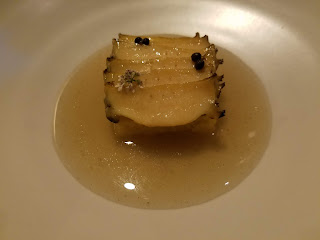 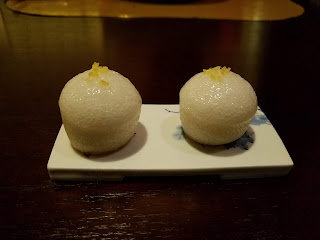 Next up we have this abalone steamed in kelp, nestled on top of some cabbage in a broth.  I'm not sure what a "soon" is and what "zepi" is.  Some minimal online Googling has not gotten me far.  I will say that the dish was delicious.  The broth definitely had some flavor that was wonderful, but I was not familiar with.

Included in this dish was some rice cakes to absorb the broth up when we were done.  The rice cakes were also stuffed with abalone and shrimp. 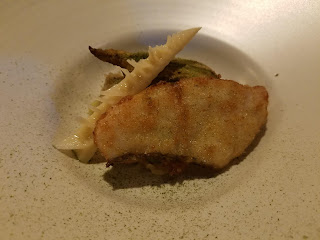 So this fish was apparently croaker, along with some bamboo, a stuffed zucchini flower (the staff said stuffed with shrimp and pumpkin), and beneath this all was some anchovy risotto.  Overall, the fish was delicious but I especially loved the risotto.  There were little fruit chunks in the risotto that gave it a contrasting texture and flavor I really enjoyed compared to most risotto. 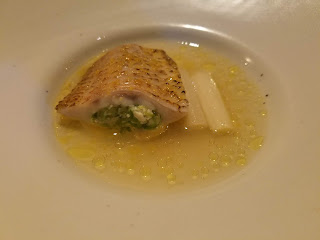 Another great dish, the fish was flavorful and stuffed with (I believe) zucchini and shrimp.  To the right is white asparagus and based on the taste, I think the broth is clam or oyster based (although probably has some fish in there too). 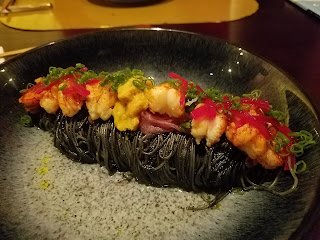 This was our second extra course of the night, so we shared this semi-large dish.

This was delicious, probably my favorite of the night.  These noodles were delicious, with good texture, and far better than the typical trash squid ink noodles I've eaten.  The seaweed jang added some good umami flavor.  On top is lobster and uni.  The lobster was amazingly tender, I'm not sure what they did to manipulate the lobster to give it that tenderness of if its some variant lobster breed in Korea. 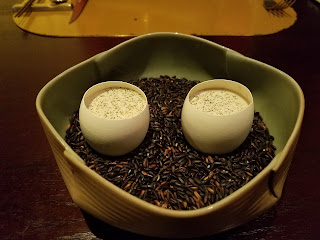 This is apparently a signature dish from the restaurant.  I missed the details the staff said when describing the dish.  I picked up truffle while eating it.  Online, various ingredients are listed, it might be the case that this dish is altered depending on the season.  There were some crunch bits at the bottom, that might have been chorizo.

I was a little surprised when I dug into the egg, as the white above is mostly foam.  I was expecting something "thicker", so I think I messed up and didn't quite collect all of the flavors at the same time.  Some good flavor here, but the foam sort of threw me off. 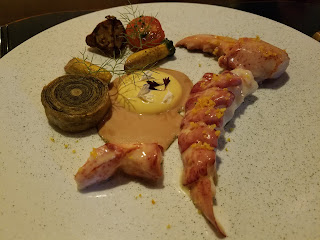 So I missed a lot of the details the staff said when they brought out the dish, so I'm not sure what the sauce in the middle was.  But going off the menu, it's a combo of egg yolk with doenjang, a fermented bean paste.  Regardless, it was tasty.  The lobster was tender and not as chewy as I'm normally used to, although had more chew than the lobster in the jang noodles above.  Unsure if that's due to the cooking technique or a different lobster type.  Either way, very good.  Off to the upper left is a whole bunch of squash, tomato, and something I'm unsure of.  It looks like leek, but had a starchy texture.  Perhaps some potato or yam that was put into a swirl. 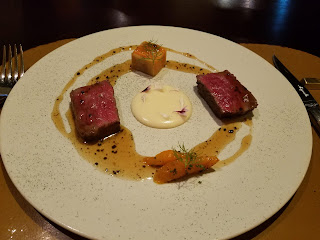 My +1 got the steak and of the few pieces I tasted, it was absolutely amazing.  I don't know what cow this came from, it wasn't wagyu / kobe, but it was incredible.  The sauce was made with soy sauce, citrus, and truffle, although I don't know what the white stuff in the middle is.  There's also some potato and carrot. 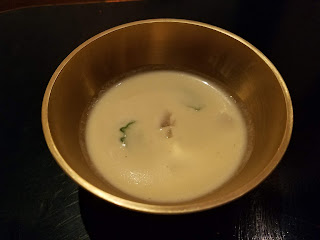 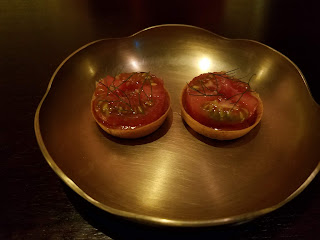 Next up we had a (I think) traditional soy bean soup that had seaweed noodles and some other vegetables in it (I recall cucumber and a lima-bean-ish bean).  I tried cold soy bean soup for the first time during my trip to Korea, and this was probably the second time I ever had it in my life, so it's a little hard to judge.  It tasted fine I guess.

The tomato tart apparently had tofu in it as well, but we couldn't quite pick it up.  We were wondering if it was not what we thought of tofu, but some alternate soy product.  Overall, pretty good. 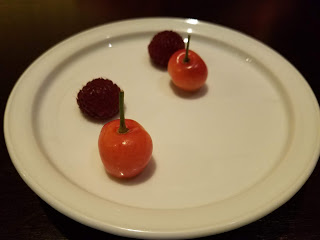 This was brought out as (what I assume) was a palate cleanser of sorts before dessert.  It's a cherry and what I believe is called "mountain strawberry", although it looks more like a raspberry. 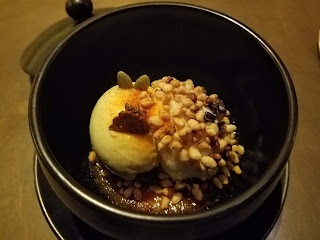 So I had to look a lot of this stuff up, doenjang is a soybean paste, ganjang is soy sauce, and gochujang is red chili paste.  I guess the ganjang was used to marinated the pecans and the gochujang was used to flavor the rice above.  Included on top were also the ice cream and whisky foam.

While I have little knowledge of "jang", I loved this dessert.  All the different textures and flavors mixed together were wonderful, the ice cream being thick, the whisky foam being foamy, the crunch of the brulee at the bottom, and all the rice and pecan textures.  Just delicious, it'll definitely crack my top ten desserts of all time. 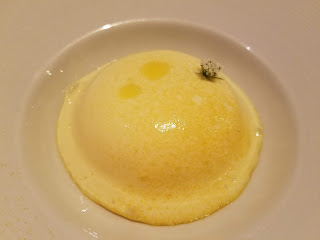 So I can't comment on this dish because I didn't try it b/c of my tropical fruit allergy.  My +1 said she loved this dessert.  She said the sorbet was more foam-ish than sorbet-ish. 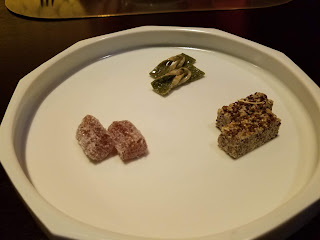 Finally the mignardise.  Some cookies at the top, some type of root flavored jelly at the left (Korean ingredient I'm not familiar with), and some sesame cookies on the right.  They also served us tea as part of the meal, which I won't bother to post a picture of.

Overall, this meal was wonderful and I can understand why it's ranked so highly.  This reminded me a lot of my meals at Benu and VEA, a French / Western styled meal with strong Asian influence, in this case specifically Korean influences.

Unlike those other meals, I was not as familiar with Korean food or Korean ingredients and did not get as much emotionally out of this meal.  Minimally I didn't know a number of ingredients, and without the Korean cuisine knowledge base, it's hard to know where some of the dishes/ingredients/reinterpretations are coming from (e.g. the fish mandu or the soy bean soup).  If you read the details in my pictures, you can tell I missed a lot.  Perhaps the next time I visit Seoul, I'll be more prepared and can appreciate the cuisine far more.

It's worth noting the price of the meal as well.  In USD, this meal would be a little under $300 for two people if no extras and no drinks were ordered.  That's a pretty good price given this restaurant's reputation.  Even with the additional supplements we paid (two extra shared courses, lobster supplement, beef supplement), the price still came to about $335 USD without drinks.