I recently took a trip to Japan and had the opportunity to dine at Narisawa.  It's a two Michelin starred restaurant, currently #8 in the World's Top 50 restaurants, and #26 in Opinionated About Dining's top Japanese restaurants.

How did I snag reservations here?  To be honest, just dumb luck.  Months before my trip I was looking into restaurants in Japan and found out that Narisawa was one of the few restaurants that A) was English friendly and B) had online reservations in English.  I wasn't even aware of all the accolades listed above until afterwards.  Needless to say, reservations were difficult.  Reservations open up the first of the month before the month of the reservation (e.g. for a September reservation, check August 1st), but I was too late by the morning of August 1st when I woke up.  In addition, not all reservations slots are available on the website.  It appears only a few slots for foreign English travelers are available online.

But one day at work the power had gone out and all server & networking equipment were down.  So there was very little work getting done.  I began doing some random Japan trip research and decided to check out Narisawa's website to see if anything popped up.  Needless to say, a slot had opened up for lunch.  Thanks power outage and lost productivity at work!

I will admit that I had some concern dining here for lunch only about 18 hours after landing in Japan.  If I was jet lagged, my fatigued state could effect my ability to enjoy the meal (such as my fatigued state at the end of the meal at French Laundry).  Then again, it was potentially a once in a lifetime experience.  Luckily jet lag was not a problem thanks to some benadryl to knock me out.

So the meal at Narisawa is sort of a celebration of nature across Japan.  In all the dishes below, they mention the areas of Japan the ingredients came from.  I'm going to list dishes in the order we ate them and not in the order they were served.  You'll understand more as you read along.

1) Satoyama Scenery and Essence of the Forest 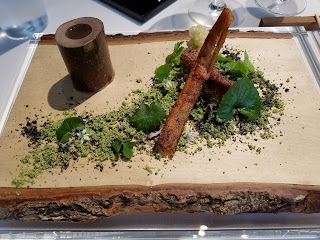 First up, this absolutely insane dish. The waiter said you can use your hands, but there's also a spoon to use. In the upper left is some spring water to drink first, then there's some root vegetable (possibly burdock but didn't verify) that's been fried to look like bark, various herbs, and the moss at the bottom is made with soy and bamboo. There's a yogurt sauce underneath. What was neat is that there was no salt or pepper used in the dish. Thus the title of the dish, "essence of the forest". Overall quite tasty. 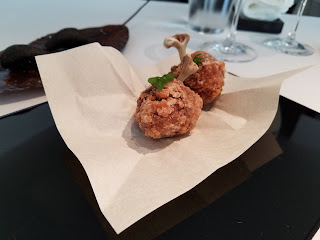 These are deep fried "drumsticks" of soft shell turtle. The waiter said they were sort of like chicken. The texture was definitely very similar to chicken drumsticks, but the flavor was slightly different. No way to describe it since this is the first time I've had turtle :-) 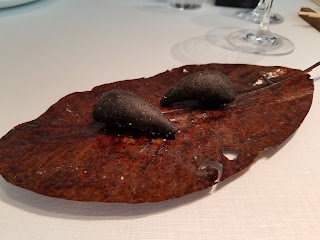 This item wasn't on the menu and was brought out extra.  I'm not sure how to describe it other than "onion bread".  There was a piece of onion in the middle and the blackened "bread" around it was delicious.  According to online, the "bread" around it was made with charcoaled leek powder. 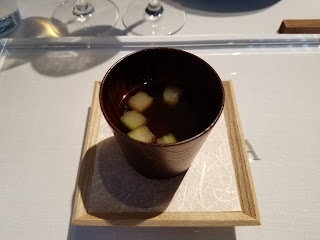 This was a soup/broth with some winter melon chunks floating in it.  When the dish arrived, my girlfriend said "yup, that's snake soup", because she'd had it before.  Overall, a very tasty broth. 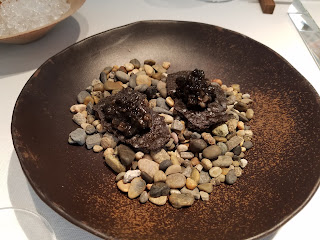 The interesting thing about this dish is that instead of serving caviar on a crispy "cracker" (which is what I'm more familiar with), the "crackers" were more like soft wafers. More akin to a texture I've had more with desserts. Anyways, a delicious dish. There's more than just the caviar on top of the wafers but I can't remember what it was (I assume squid). 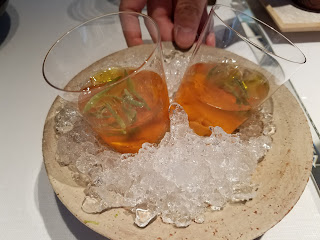 I had to look up what "Water Shield" is, but it's a water plant of some sort. The consomme was made with some kelp & bonito. I'm actually not a huge fan of uni, I just don't enjoy the flavor compared to most people. However, I loved this dish. The uni was a tad sweeter than other times I've had it. Unsure if it was the uni or the combination of flavors that brought it out. Just delicious. 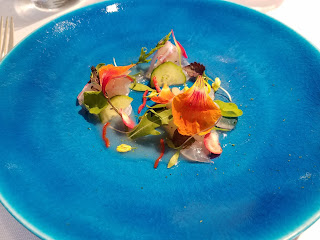 I love the color in this dish. The sea bream was marinated in some kelp and there's also coriander and garlic and some herbs/veggies here. Delicious.

So this was the first item listed on the menu, but it'll take some time to explain how we ate it as the eighth course.  First they brought out this around the first course of the meal. 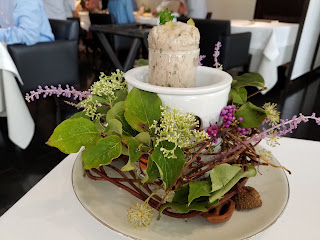 This was the bread dough rising.  Then later a waiter came and put it into a stone bowl.  He also sprinkled some "chestnut powder" on top of the dough. 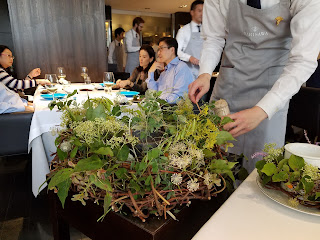 Then put the stone bowl on the table to let the bread sit and cook. 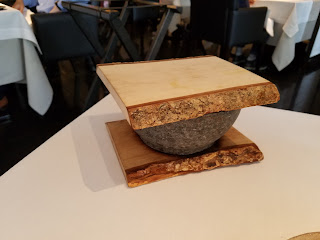 Eventually, he took it out and served it to us with this "moss butter". 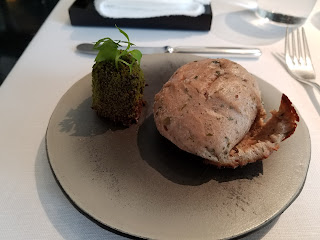 The "moss butter" is apparently made with olive & spinach powder to give it the moss look.

Needless to say, this whole dough rising, stone bowl baking thing on your table is awesome.  I can't think of anything I've ever seen like this.  This bread and butter was delicious.  The butter was a tad sweeter than most butters I recall having. 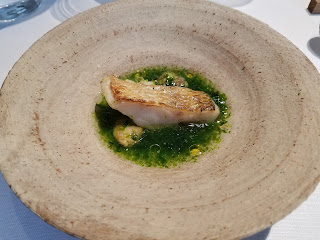 Really tasty dish. The seabass was grilled over charcoal and the broth included seaweed and clams. I really enjoyed the broth. 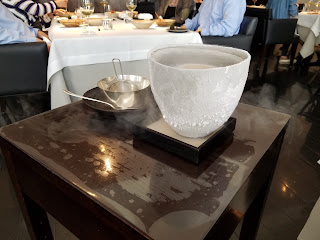 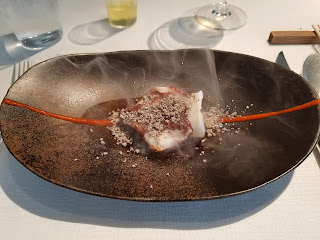 Ok, this dish is insane. First they carted out the bowl of liquid nitrogen, then they brought out the plate with squid on it. The liquid nitrogen had some paprika powder and some other stuff (sorry can't remember) and they poured it on top of the squid (it's that black ash-like stuff you see). The sauce beneath the squid was some mixture of chili and paprika which I can't remember the details.

This squid was the best squid I've ever had in my life. I would probably put this as my favorite dish of the night. I don't know if the squid was tenderized into oblivion, or if it's a particular Japanese squid, or if it's in season or what but it was so tender and the flavor just exploded with the sauce. 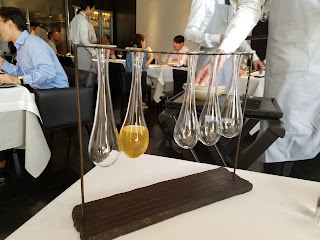 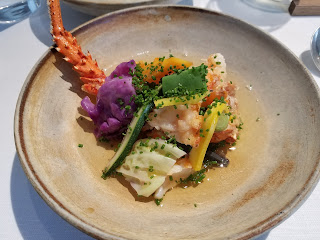 First off the waiter brought the beaker set of chicken, pork, and ham broth to the table (one is missing because he began pouring it already) before pouring it into the spiny lobster dish. The broth was delicious. You could definitely taste the chicken and the pork flavor. It was overall very light. The lobster was delicious and I loved all the contrasting colors here with the vegetables. 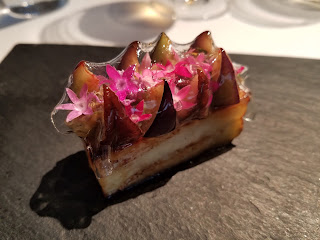 This dish was absolutely ridiculous. I just stared at it for a minute or two before taking a bite. The eggplant used is the "kamo" eggplant and it's cooked three ways: sauteed, pureed, and fried and build into this tower. On top is a tomato agar sheet and obviously some flowers. The waiter said this is one of the chef's most signature dishes, no surprise. 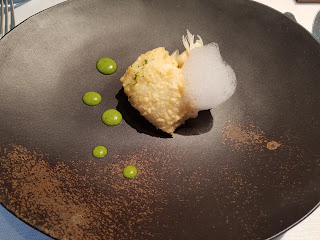 My immediate reaction to taking the first bite was, "This tastes like fish." Perhaps its this particular eel and the texture, but I would not have guessed it to be eel. Perhaps I'm so used to unagi sushi that it just surprised me. The sauce on the left included some Japanese basil and wasabi. The dish also includes some white peace with sesame and a ginger foam. 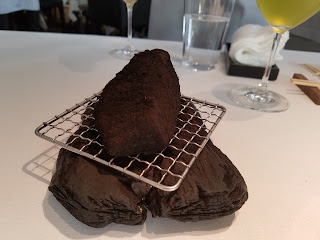 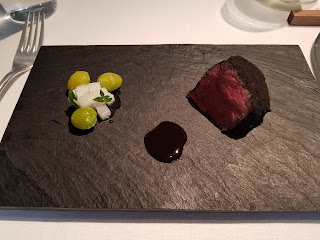 First off the waiter presented the leek powdered covered beef on the table. I believe he said this was beef round, although I could be mis-remembering. He actually was nice enough to ask if we should split the beef 50/50, and my girlfriend immediately asked him to give me more than her :-)

The bottom pic is of course the serving of the dish. It came with a sauce that was a mixture of beef juices and red wine reduction. Off to the left was gingko and something else (didn't get what the white was, perhaps a daikon of sorts).

It's worth noting that at the beginning of the meal the waiter gave us the option for pigeon or pork instead of beef for this course. So you have those options if you want. 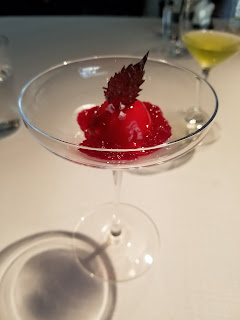 If you've ever read my blog before, you know I love sorbet, and this sorbet was delicious. Red shiso was added into the "sauce" over the sorbet and the shiso leaf on top was carmelized in some way. 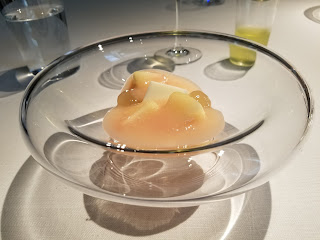 This was a wonderful light dessert to finish off the meal. Much better than a heavy cake or creme brulee like some French Restaurants might serve. There are white peach chunks, with a white peach puree, some almond tofu, and the green grape-like chunks are actually gummi candy. 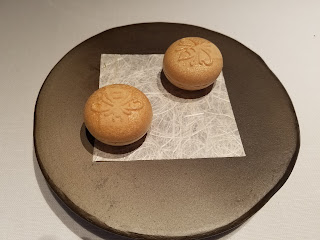 We finally got these rice matcha cookies at the end.  My girlfriend decided to open the cookie up and see what was inside.  Minimally there's matcha, but there appears to be some gelatins and red bean.  I couldn't remember everything the waiter said. 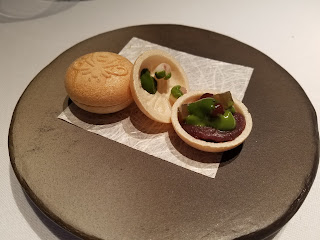 I would like to mention that Narisawa has a tea pairing option in addition to wine pairing.  This was wonderful for me, as I don't drink alcohol so I was finally able to do a drink pairing :-)  Unfortunately there's no listing of what teas were served to us, so here's a collage. 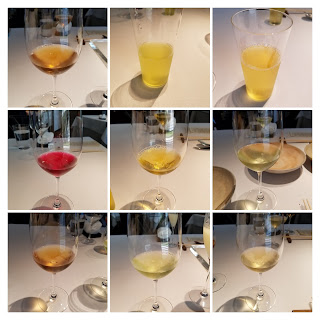 There was a wheat tea, ume tea, three green teas, black tea, oolong, and rice match tea, and one other one I forgot.

About half way through the meal, I began to think "Is this the best meal I've ever had?"  For the past few years, my favorite/best was Benu in San Francisco.

I've been debating which was better looking at each dish.  Needless to say, Narisawa won on presentation.  I've certainly been to a fair number of fancy places.  I've certainly eaten my fair share of gorgeously presented dishes.  However, I feel the dishes at Narisawa were just at another level.  The bread cooked at tableside and the liquid nitrogen were an entertaining way to present the food.  The presentation on the moss butter and "Gion Festival" eggplant dishes were just at another level.

I'll have to think about this more :-)


One other comment to make is that the meal was only 20,000 yen (about $200 US) before tax and tip and not counting drinks.  That is a fabulous deal for such a meal.  You'll be hard pressed to find a similar meal in the US for a 2 or 3 Michelin Star restaurant.
Posted by Albert Chu at 4:08 PM