Benu is a newly minted 3 Michelin star restaurant in San Francisco.  It's head chef, Corey Lee, was once the Chef de cuisine at French Laundry.

Unlike French Laundry, Benu is a completely Asian themed restaurant.  Some online call it "Asian Fusion".  I suppose it's an accurate description, although I'd say that it is far more leaning "Asian" than most "Asian fusion" restaurants.

Dinner was a 15 course tasting discounting the normal extras one might expect.  Here's an overview of the tasting 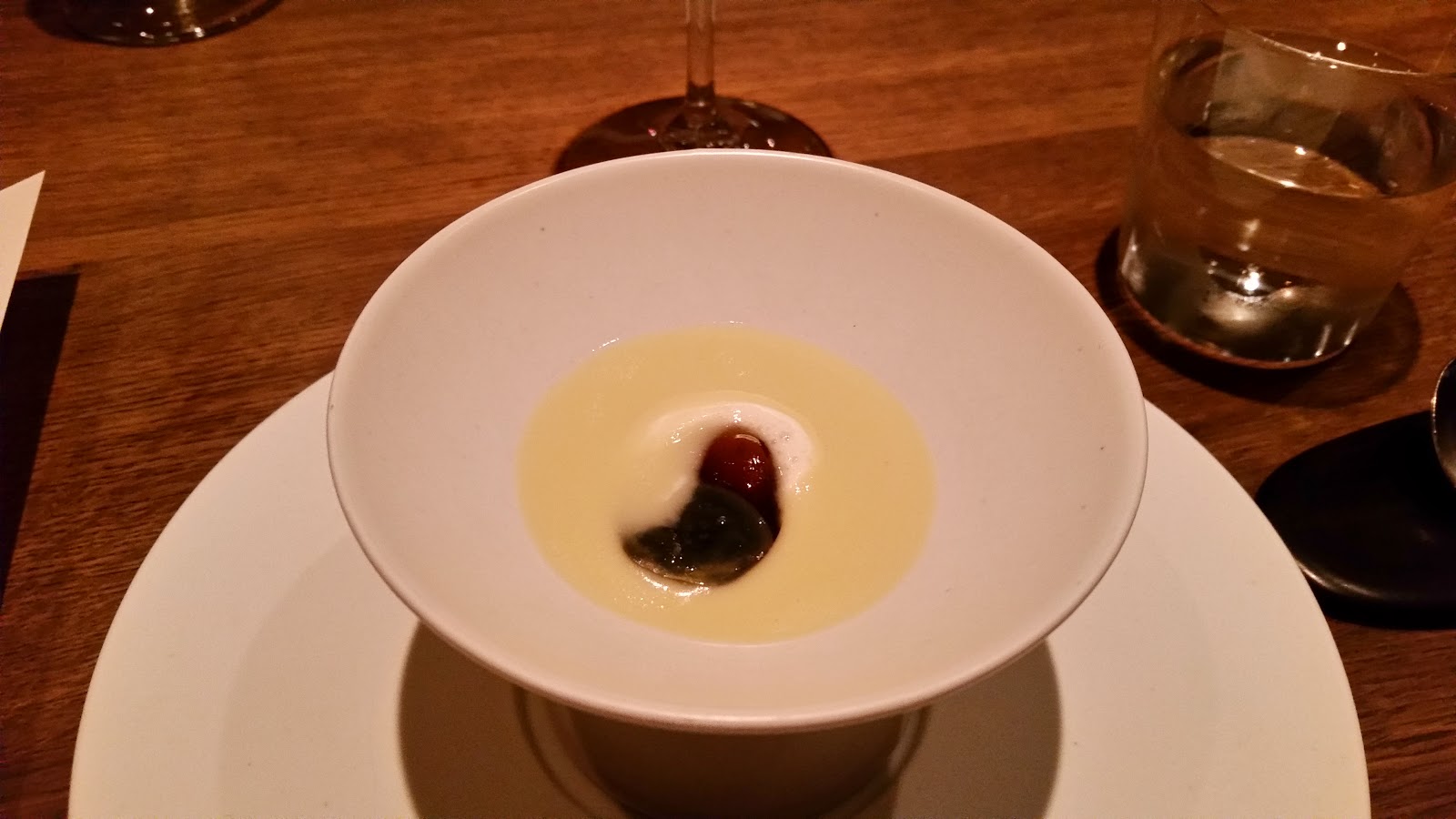 I didn't know what a potage was, but the waitress said it's basically a tasty soup.  She said Benu thickened the broth using cabbage and (I hope I recalled this correctly) bacon.  This dish was delicious. 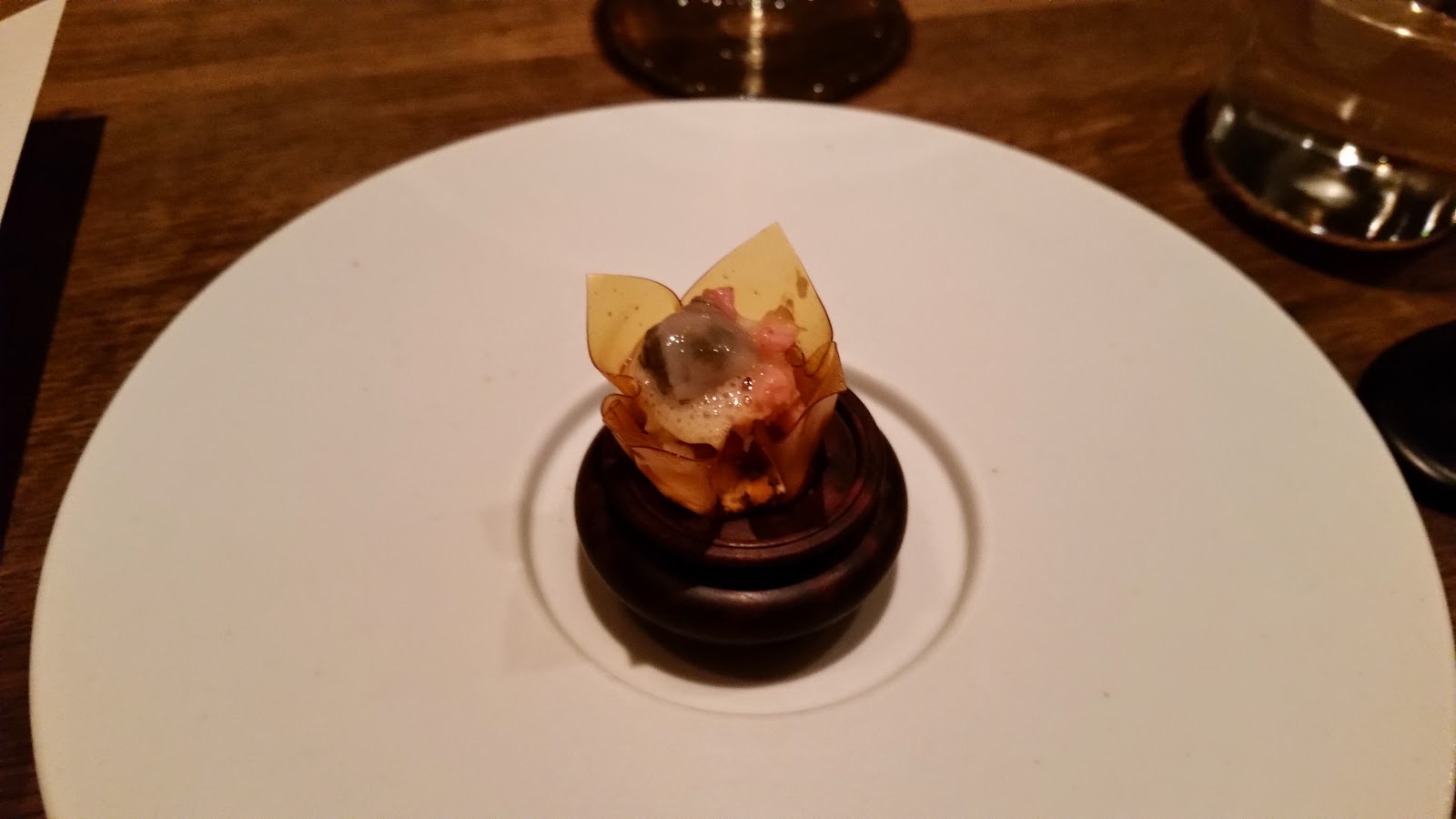 I think this was my favorite course of the night.  The combination of all the flavors and textures in a light flaky skin was perfect. 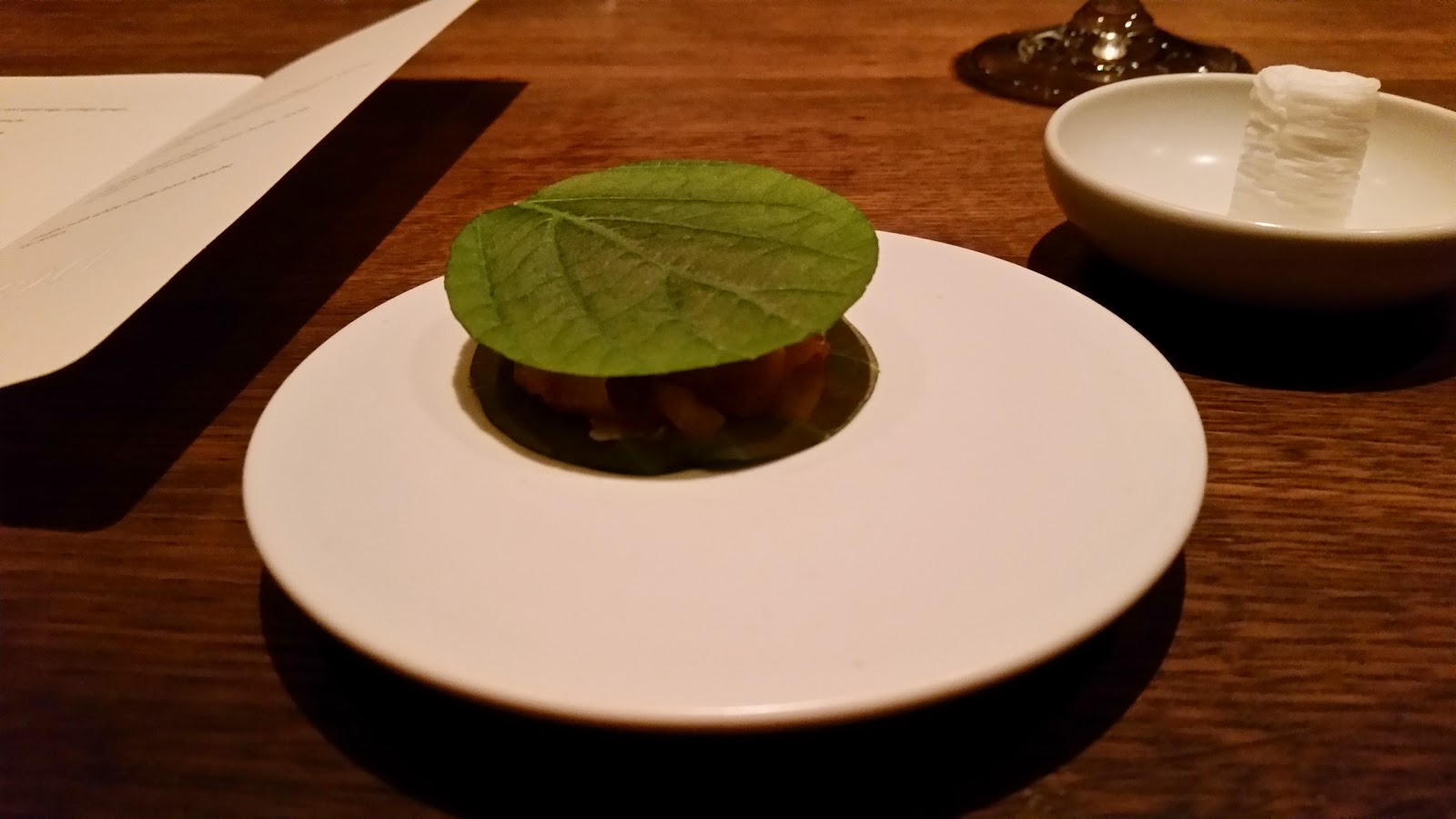 It's sort of hard to see in this picture, but effectively this is a sashimi sandwich w/ fluke & daikon in the middle and sesame leaf as the "bread".  This was really tasty.  I've never had sesame leaf in my life before (atleast I don't recall having it) and in combination with the fluke it gave this really unique and wonderful taste.  Loved it.

Note the little towelette in the upper right of the picture.  That isn't food. 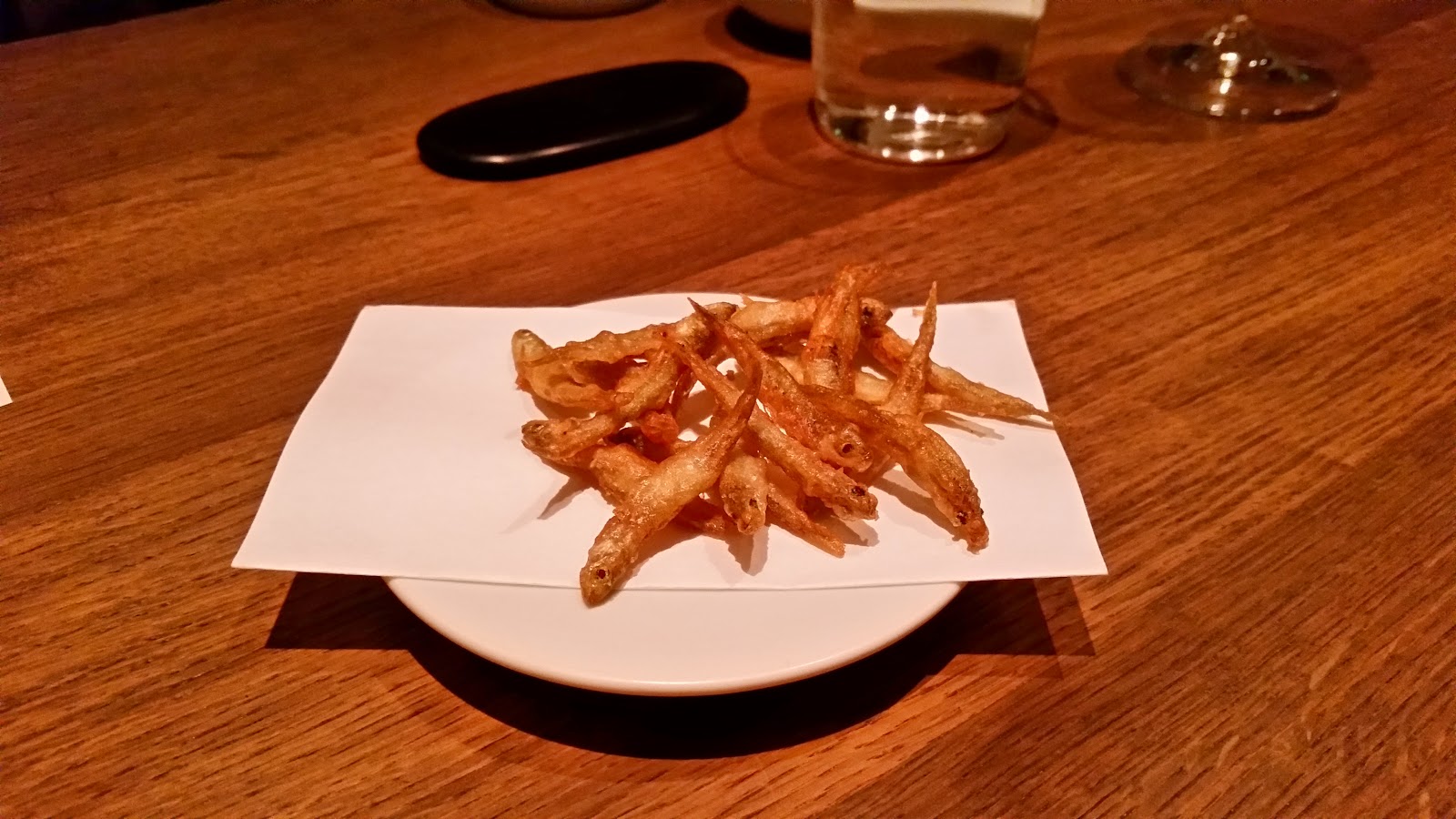 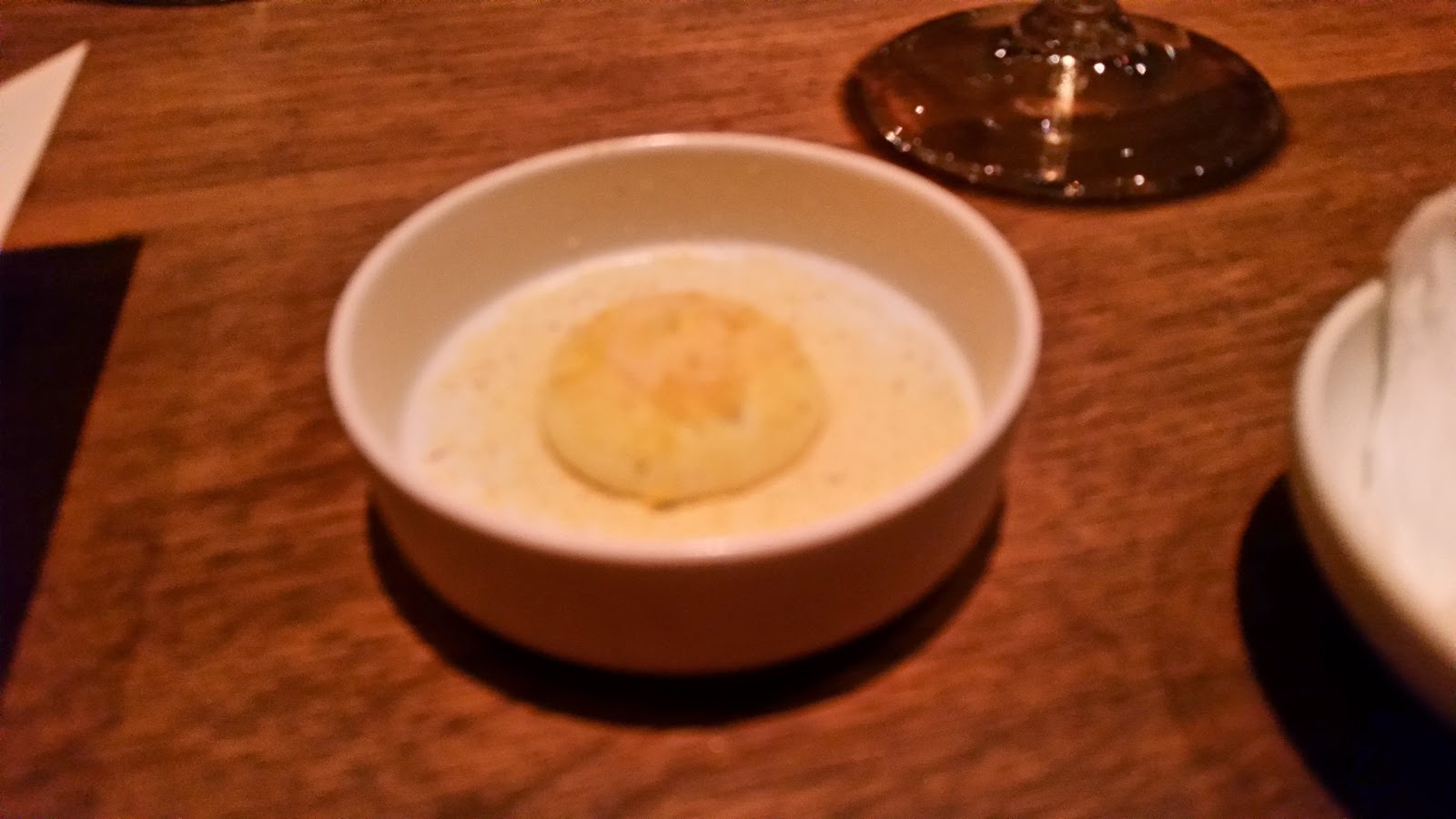 This fourth course was for the table.  About 4 little smelt fishes to dip into the mustard/mayonnaise sauce.  The dish was really tasty. 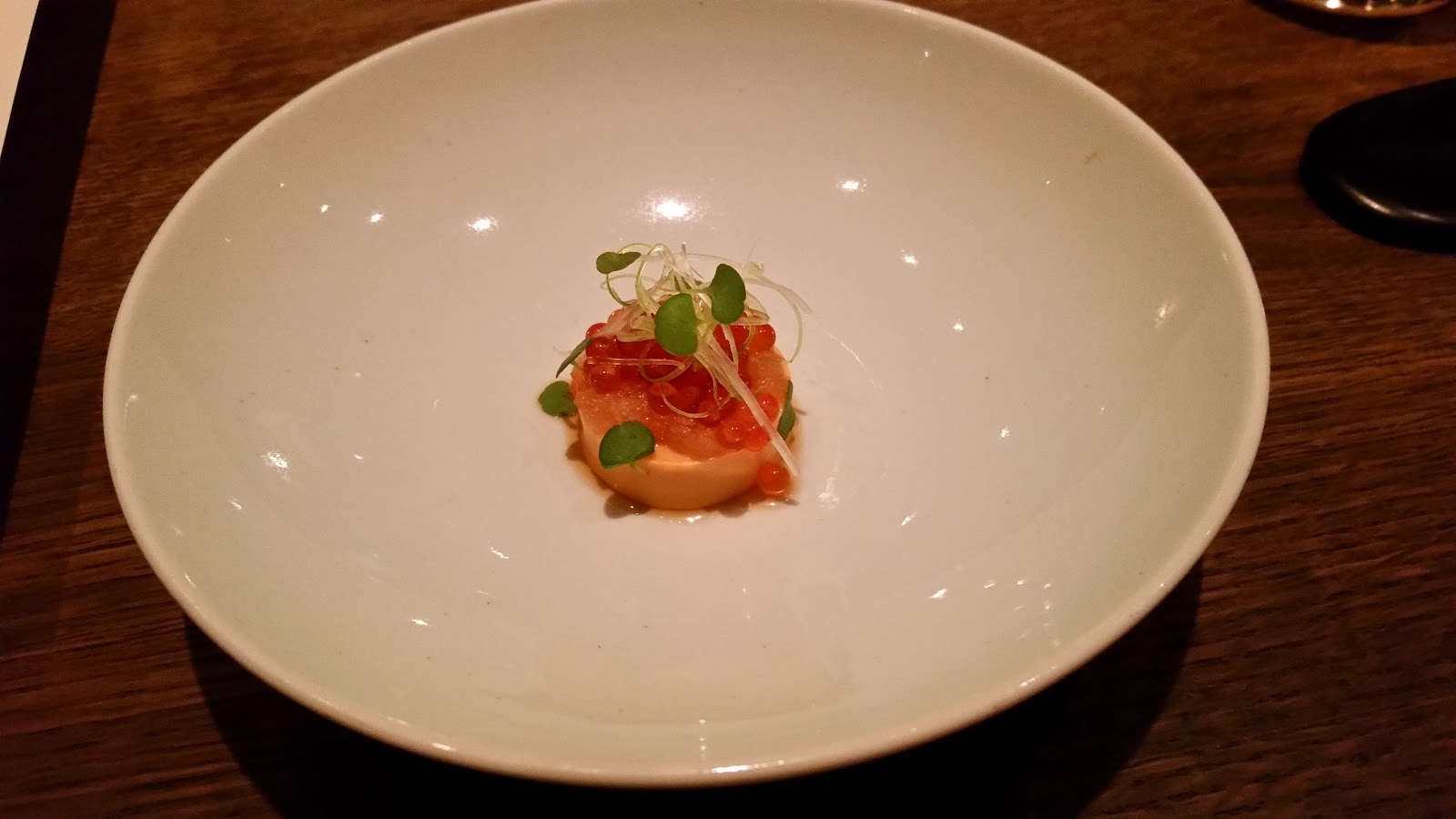 I've had monkfish liver before, but it certainly didn't taste like this.  I jokingly told my dining mates that maybe this was the "foie gras version of monkfish liver".  I don't know what was done to make this far creamier and tastier, but it was delicious with the combination with everything else. 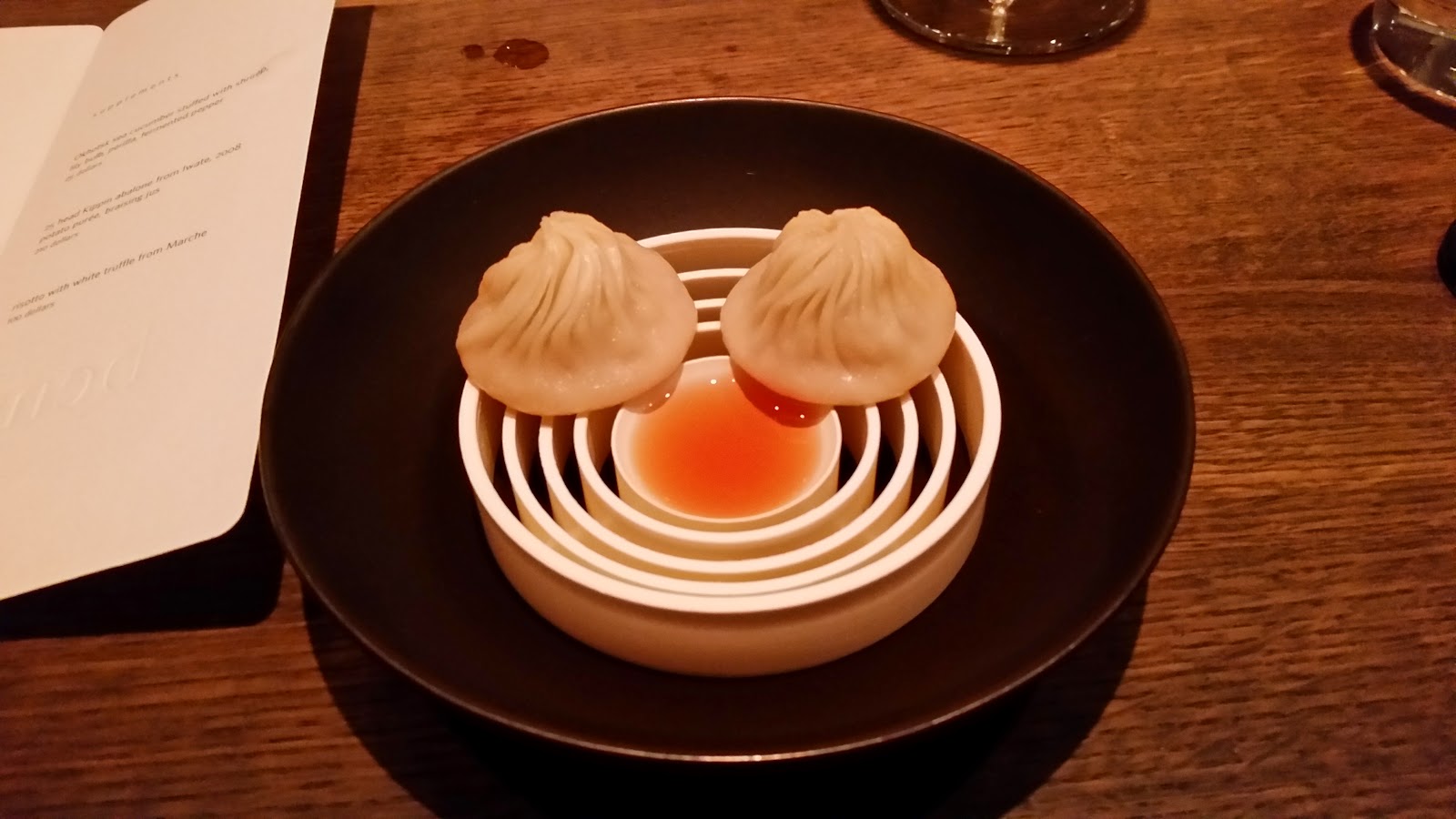 Then came one of Benu's signature dishes, lobster coral xiao long bao.  I love xiao long bao (see my "Best of" list).  This xiao long bao is amongst the best I've ever had (it won't go on the list though, as it's not pork based).  I always require my xiao long bao to have a huge ratio of soup to meat and this did not disappoint.  Just super crazy delicious. 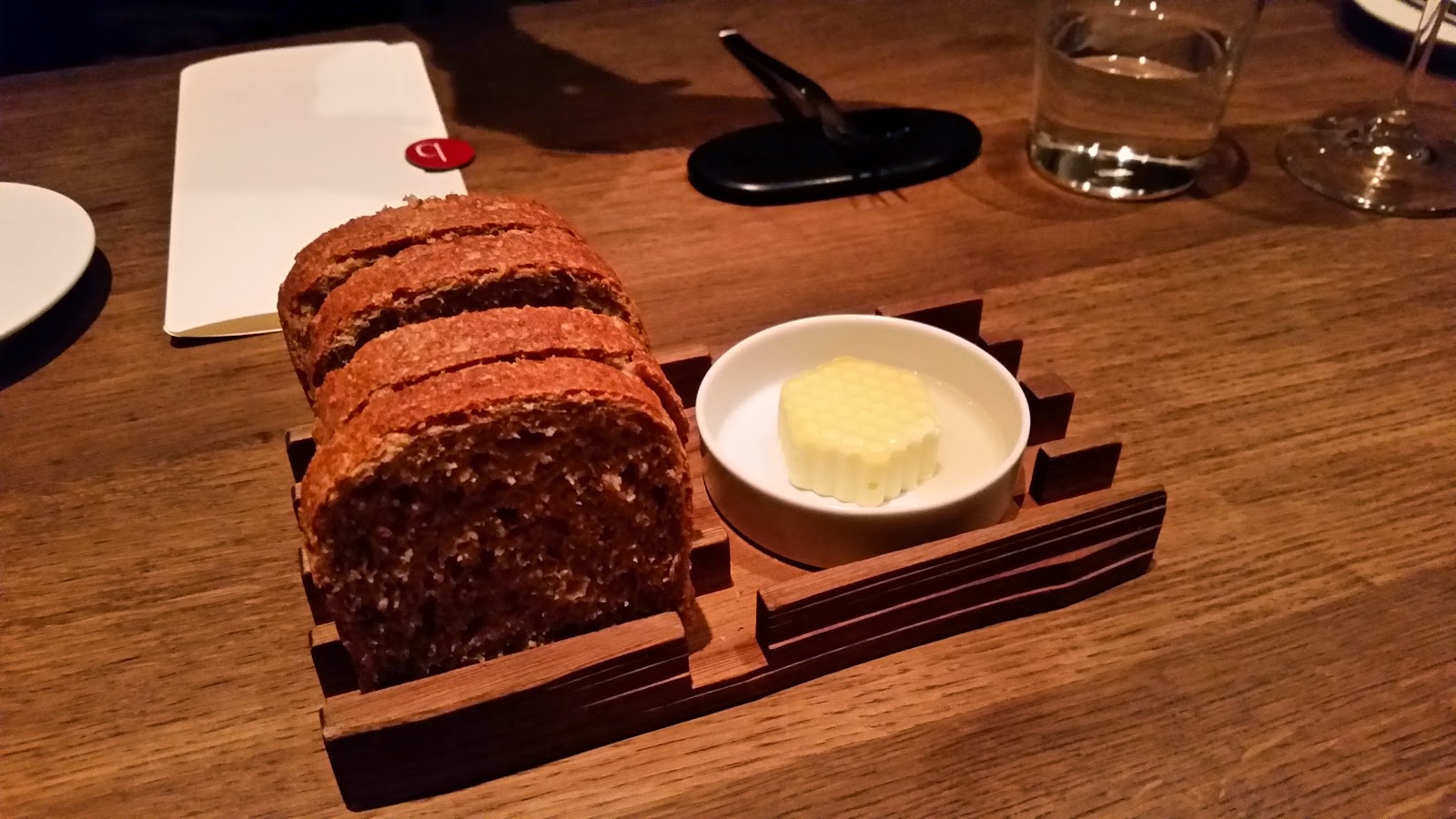 This was the first bread course.  I can't remember what kind of bread it was.  It was good.  I also thought the butter was crazy pretty with it's honeycomb shape imprinted on it. 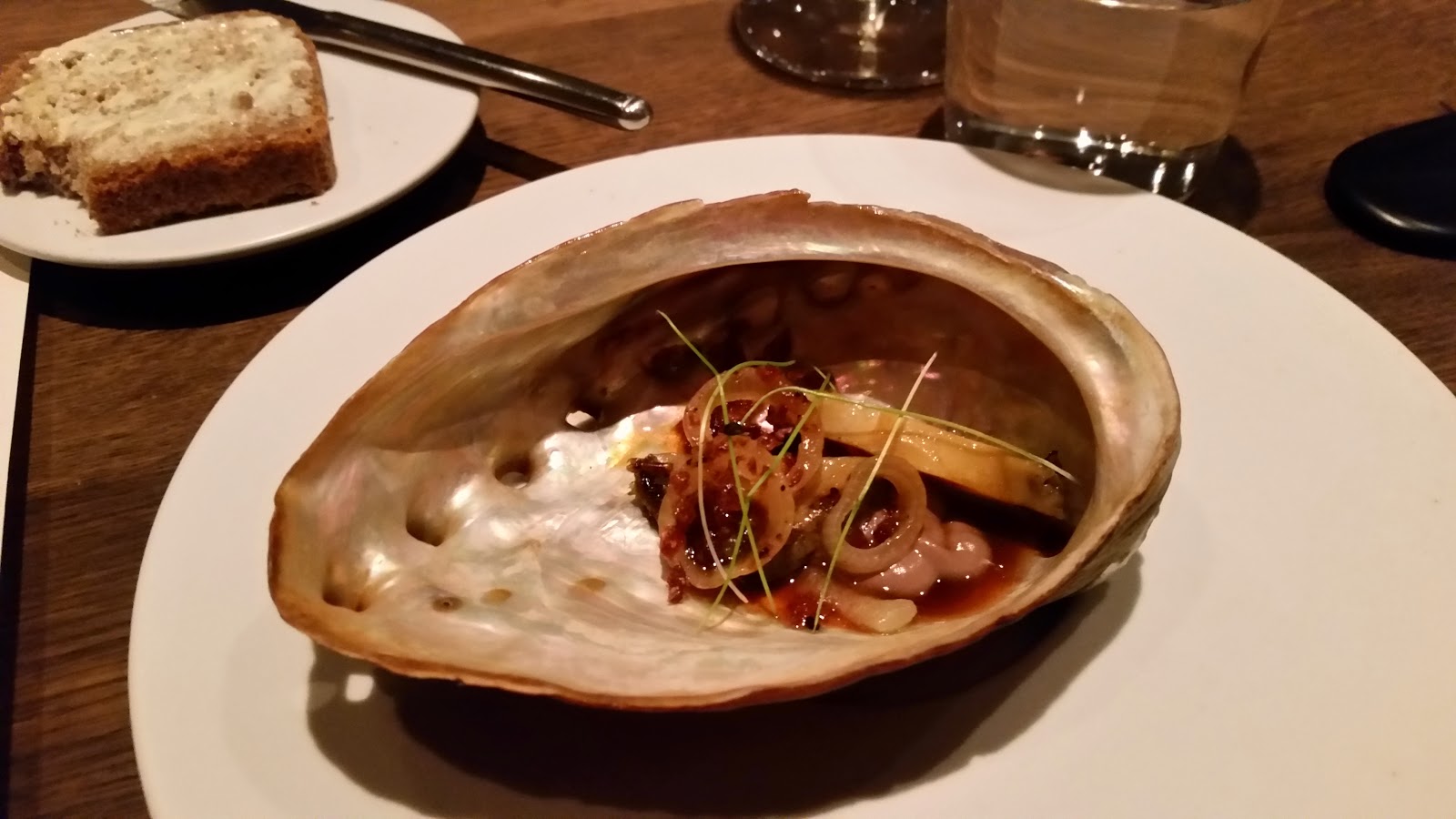 I haven't had abalone that many times in my life, so this dish is a little hard for me to judge.  Is abalone normally supposed to be a tad chewy?  I have no idea.  I thought this was a pretty good dish and the chicken liver was quite good.  I'd need to eat more abalone to really judge this. 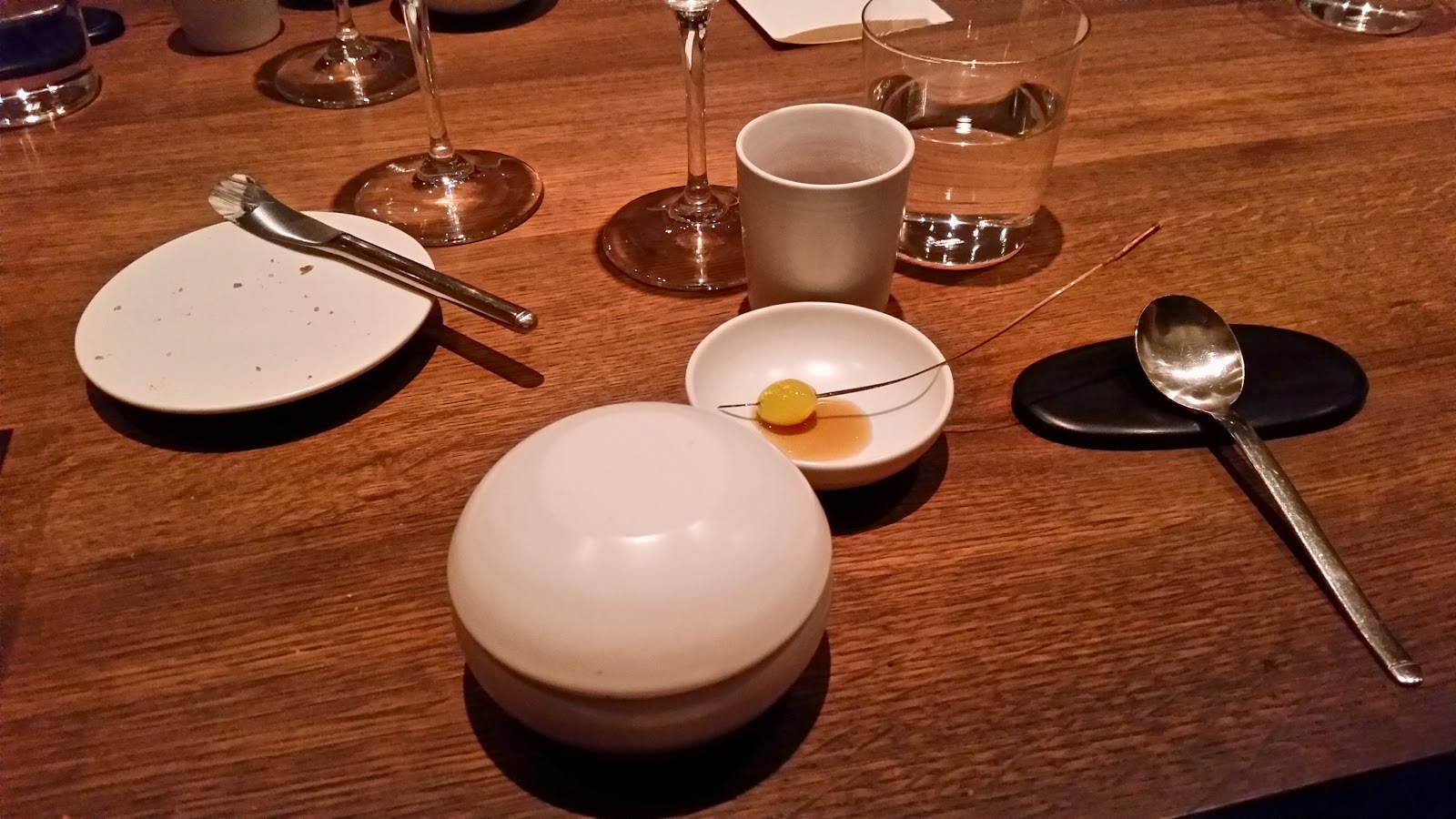 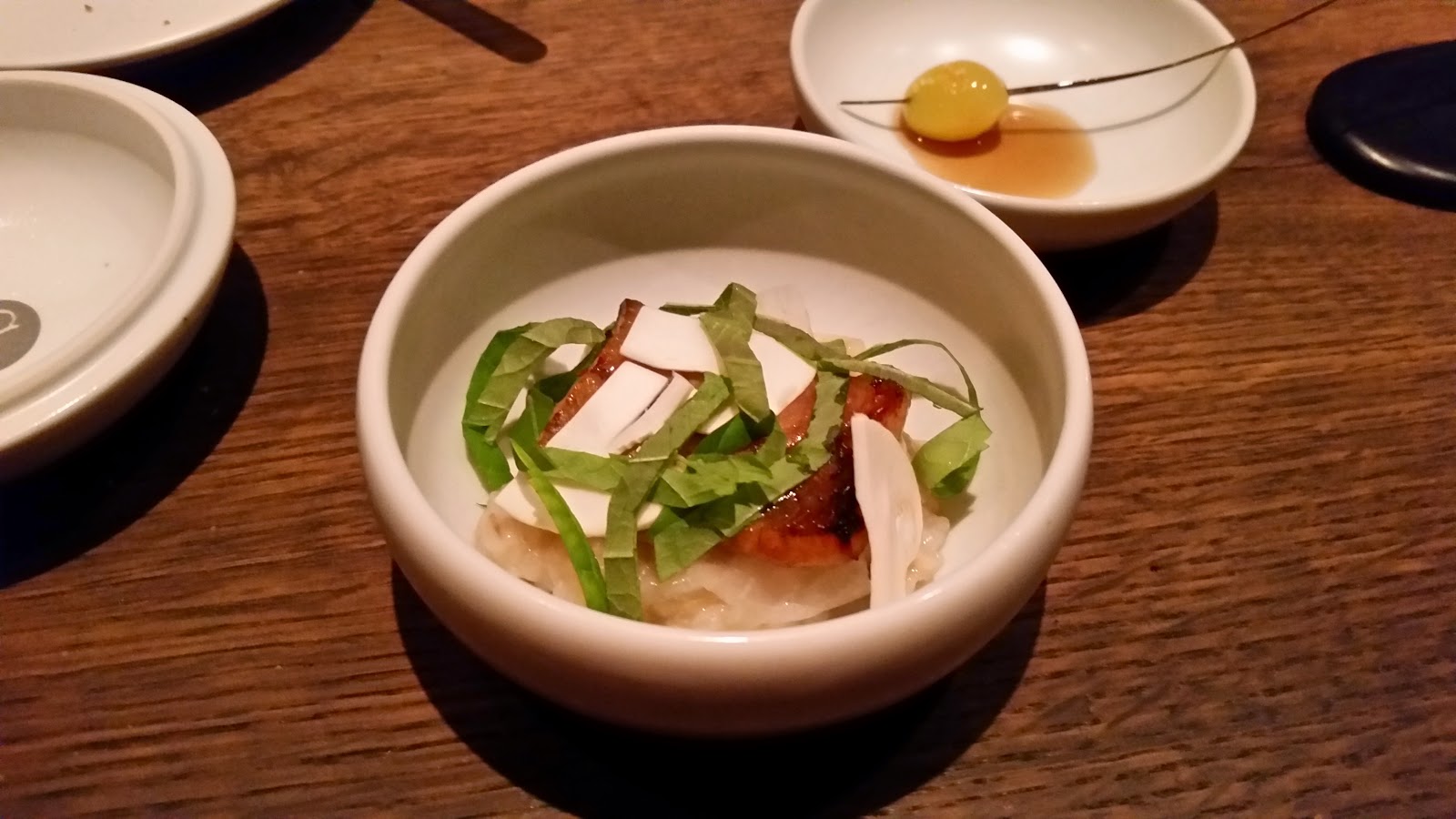 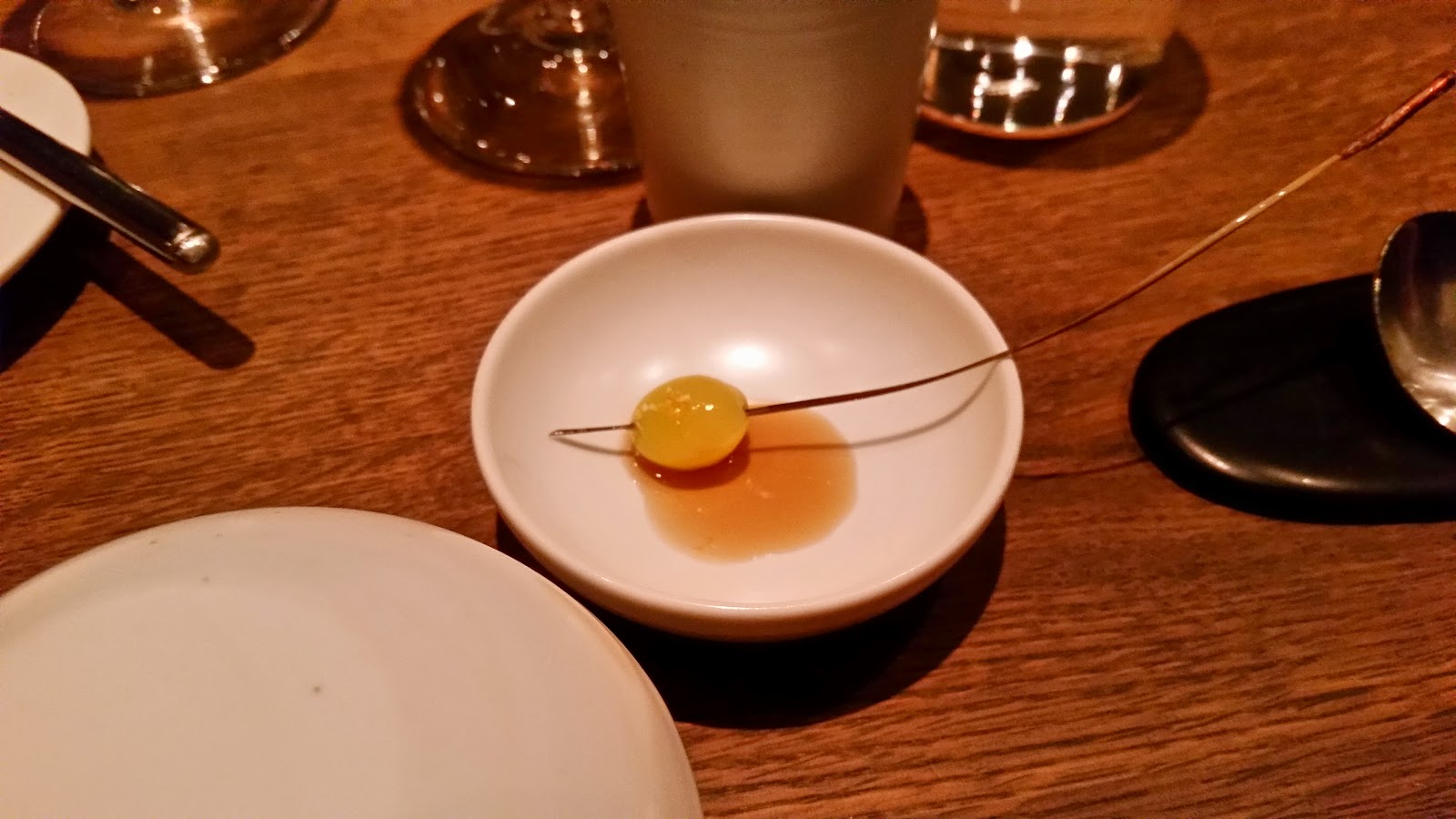 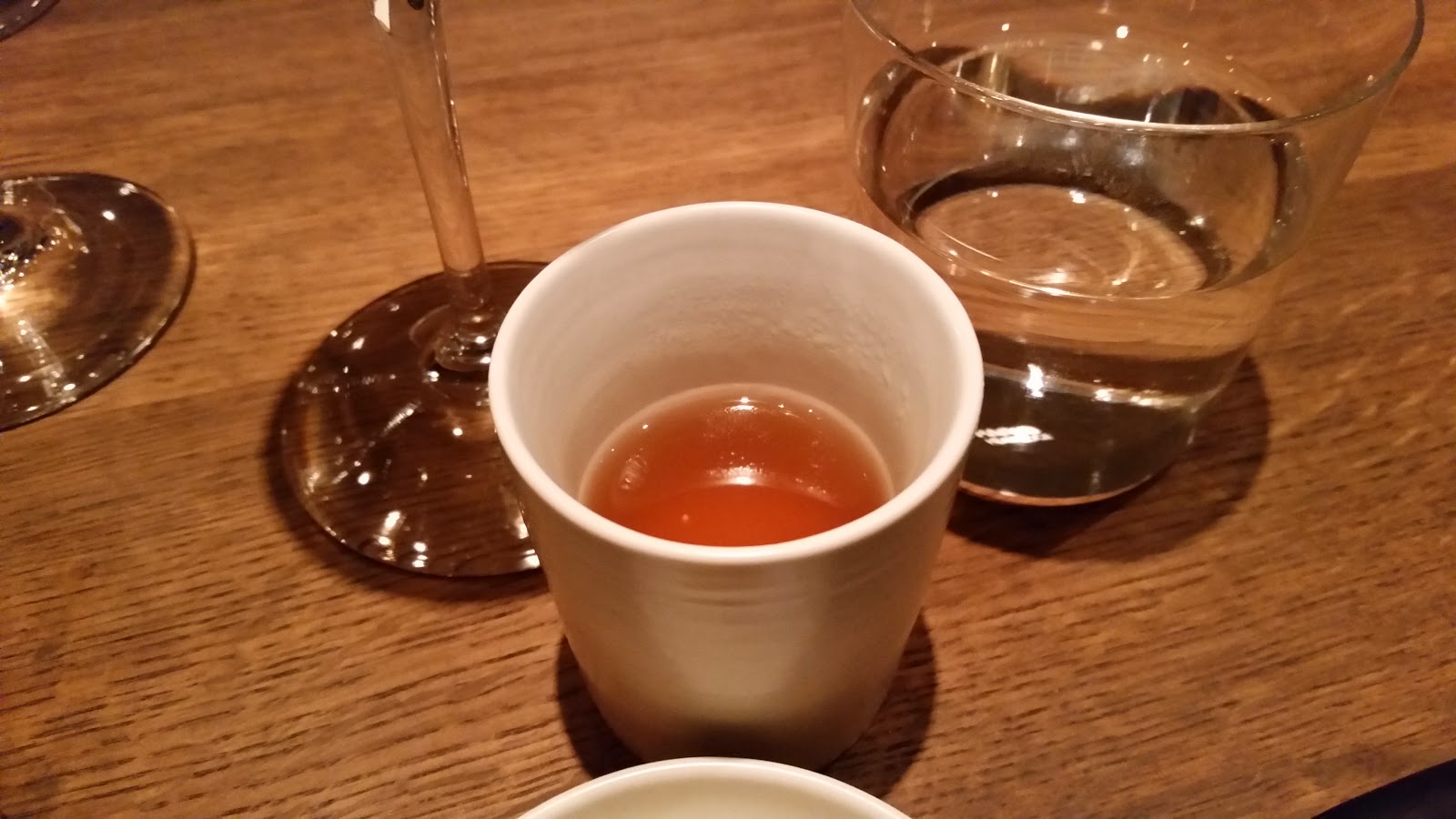 The next course was three little things.  It may be hard to see in the picture, but the eel was basically on top of a rice risotto/porridge.  Overall super tasty.

I think the second part was a gingko fruit, but I could be wrong about that.

The last was a broth that was infused with the taste of pine.  Holy crap, I've never tasted a broth like that.  The pine really stood out.  It was one of the more amazing dishes of the night. 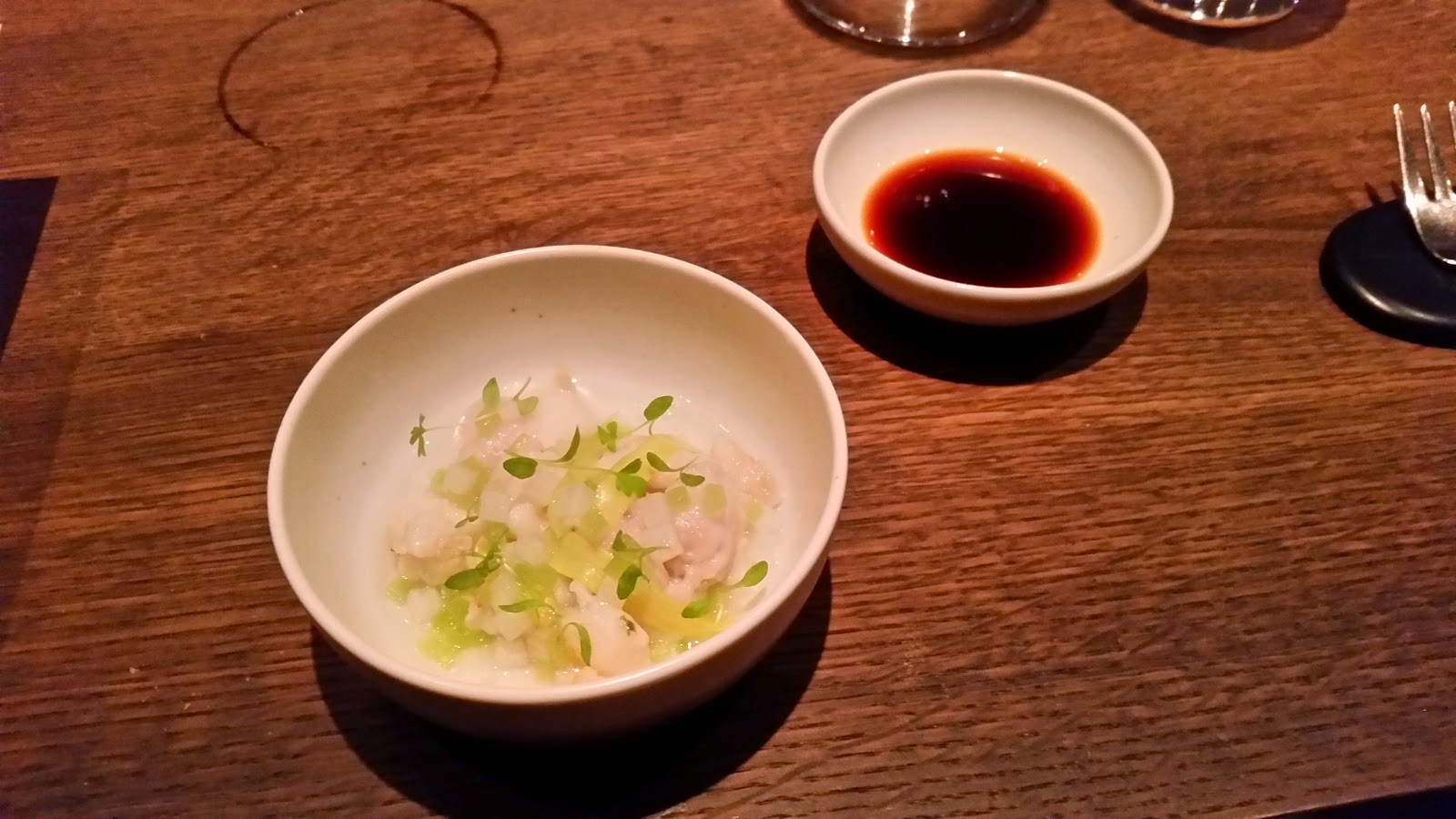 I've had frogs legs before, but the frogs legs are always in "drumstick" form.  So when I saw this I was quite surprised.  In addition, I've always had frogs legs in sauteed or fried form.  I'm not sure how they cooked this, but I was shocked frogs legs could taste like this.  If you didn't tell me what this was, I would have said it was a white flaky fish based on the texture.  Very good dish. 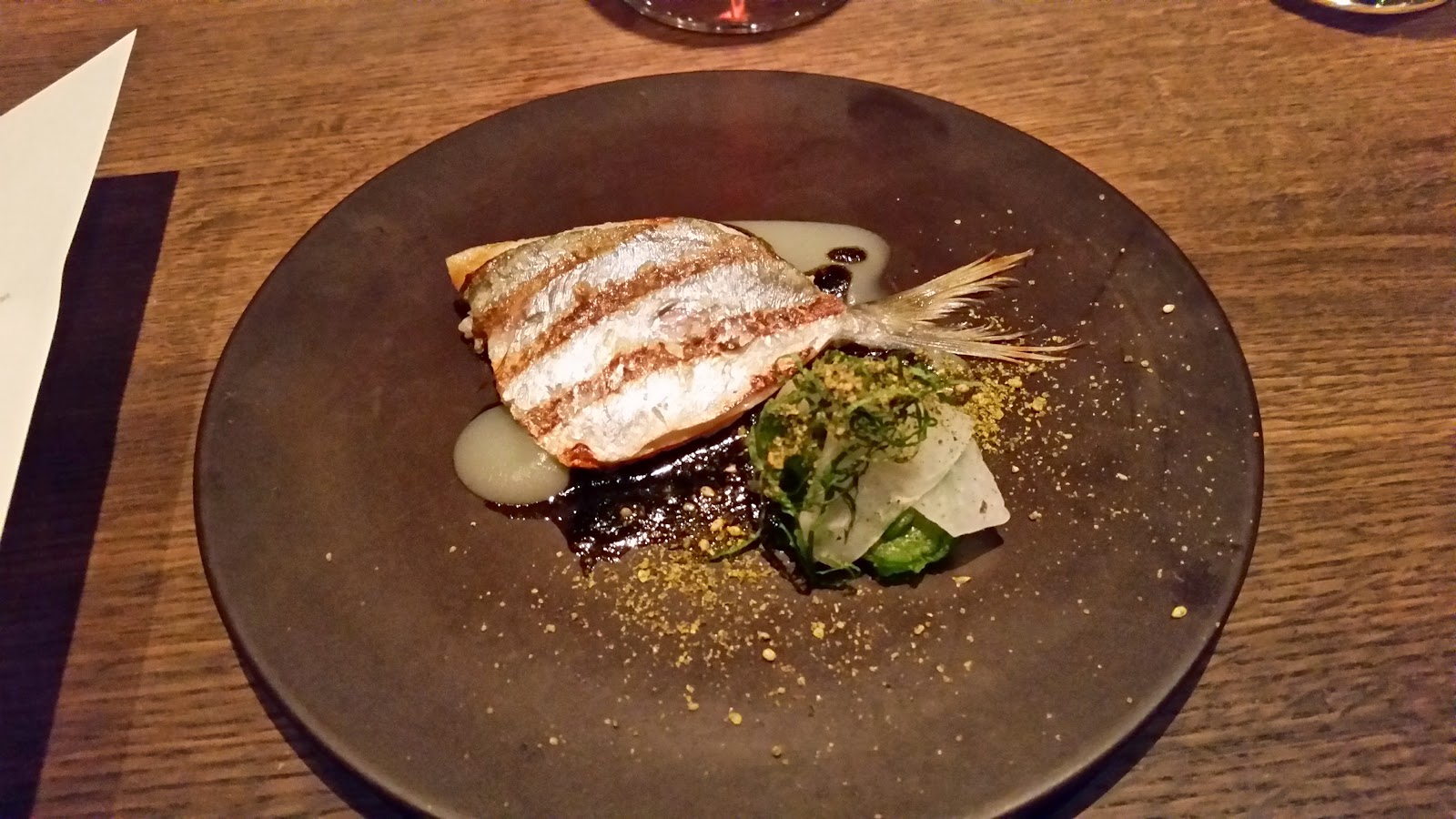 Holy crap, this was amongst the best fish I've ever had in my life.  It was tender and just so tasty.  I have no idea what the white & brown sauce were.  I liked it with just a bit of the sauce, as the brown sauce was a tad heavy. 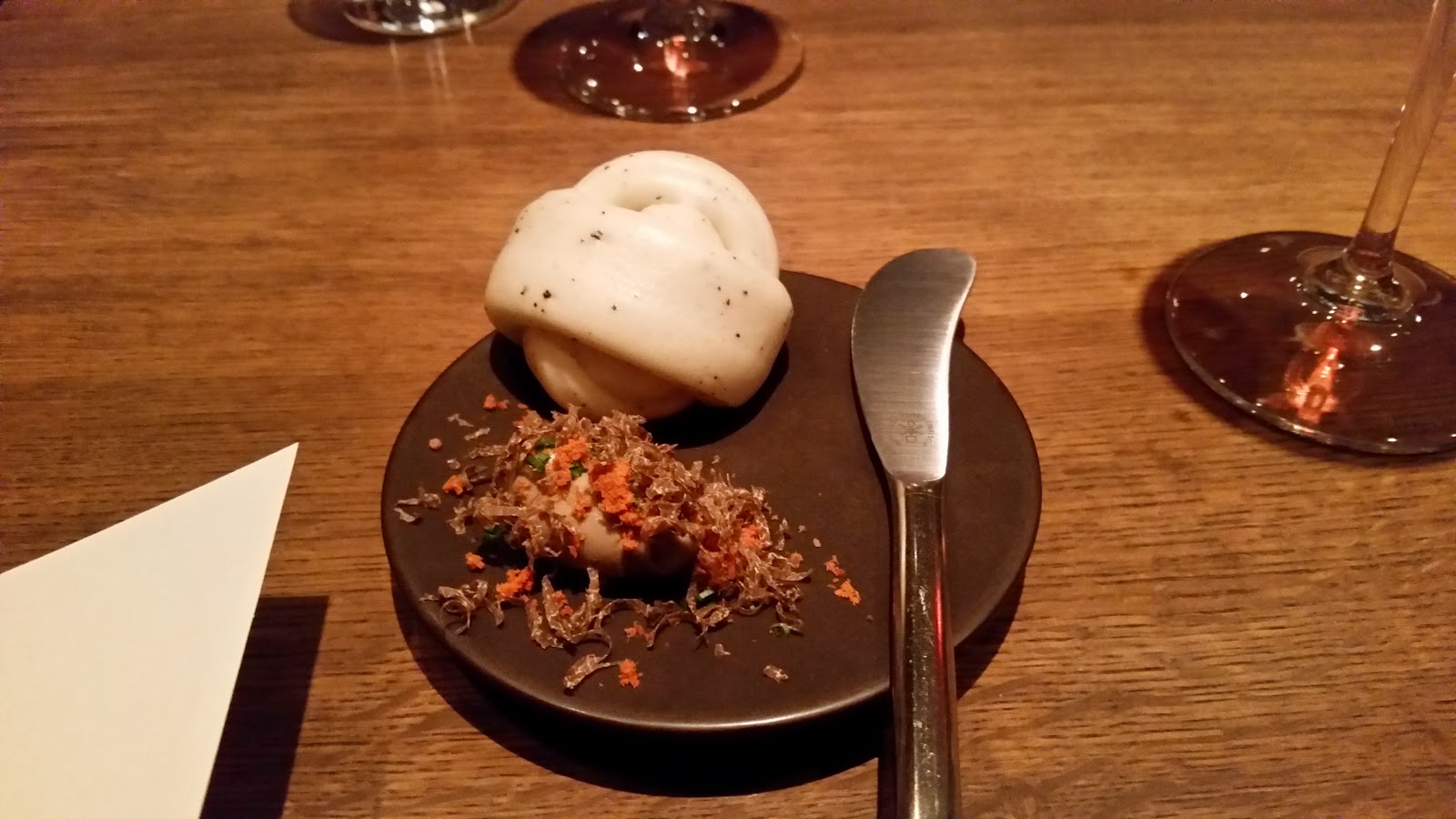 This is technically the second bread course, however I think it could have counted as a course by itself.  It's a Chinese style steamed bun w/ a whole chestnut in the middle and a truffle spread.  I've never tasted anything like this before.  Delicious. 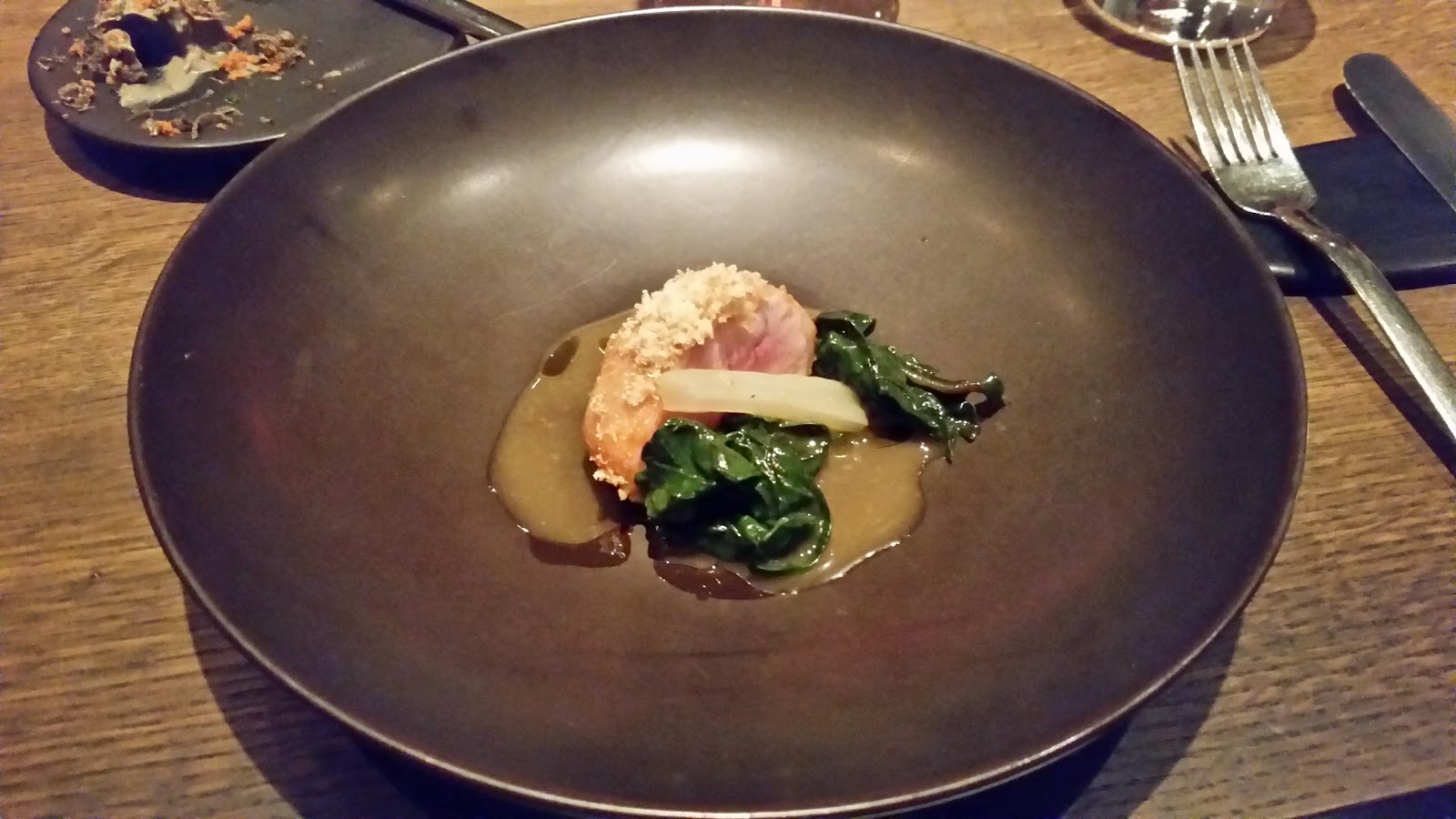 Another delicious dish.  Only thing to note is this is a very western style dish.  Nothing in it felt Asian in anyway. 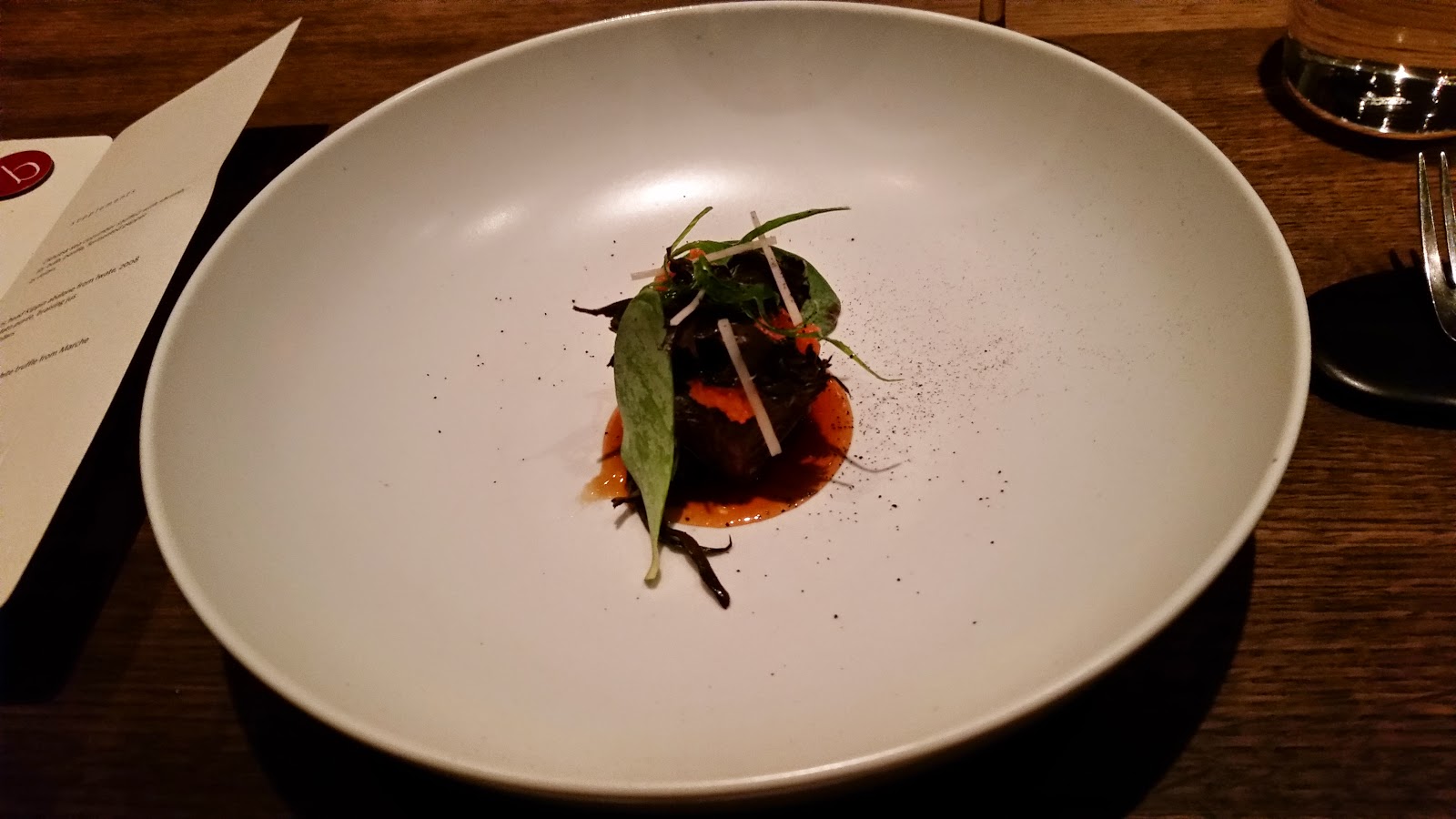 Not listed on the menu was the fact that there was a yuzu sauce on top and black trumpet mushroom shavings and I don't know what the green is.  The yuzu citrus really brought this out.  The beef was really tender.  Really really good. 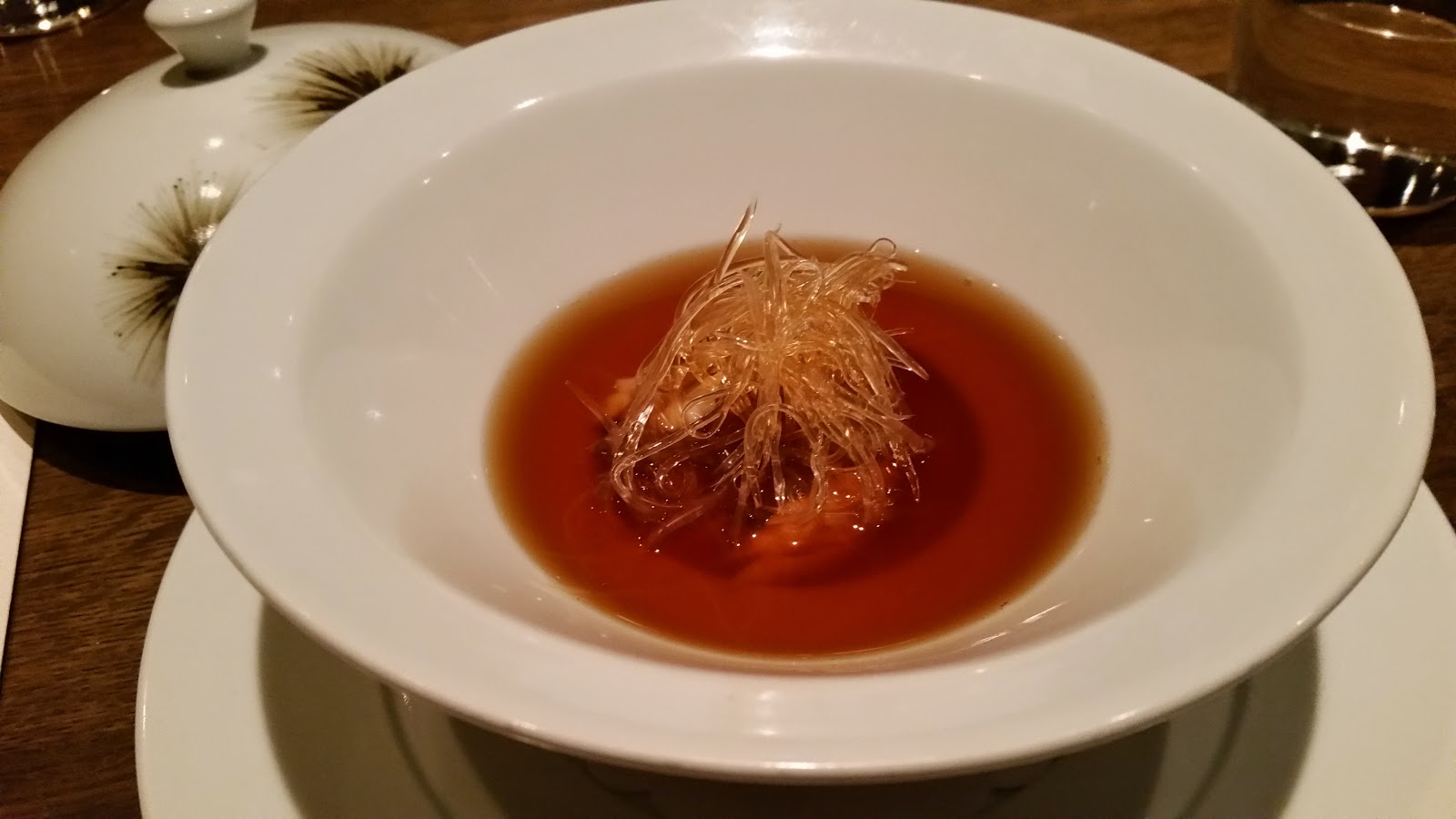 This is another pretty famous Benu dish, the faux "shark fin" creation.  I have had shark fin soup a long time ago, but I can't remember what it tastes like, so it's hard to judge this faux shark fin.  Overall, a very tasty dish and the broth was delicious. 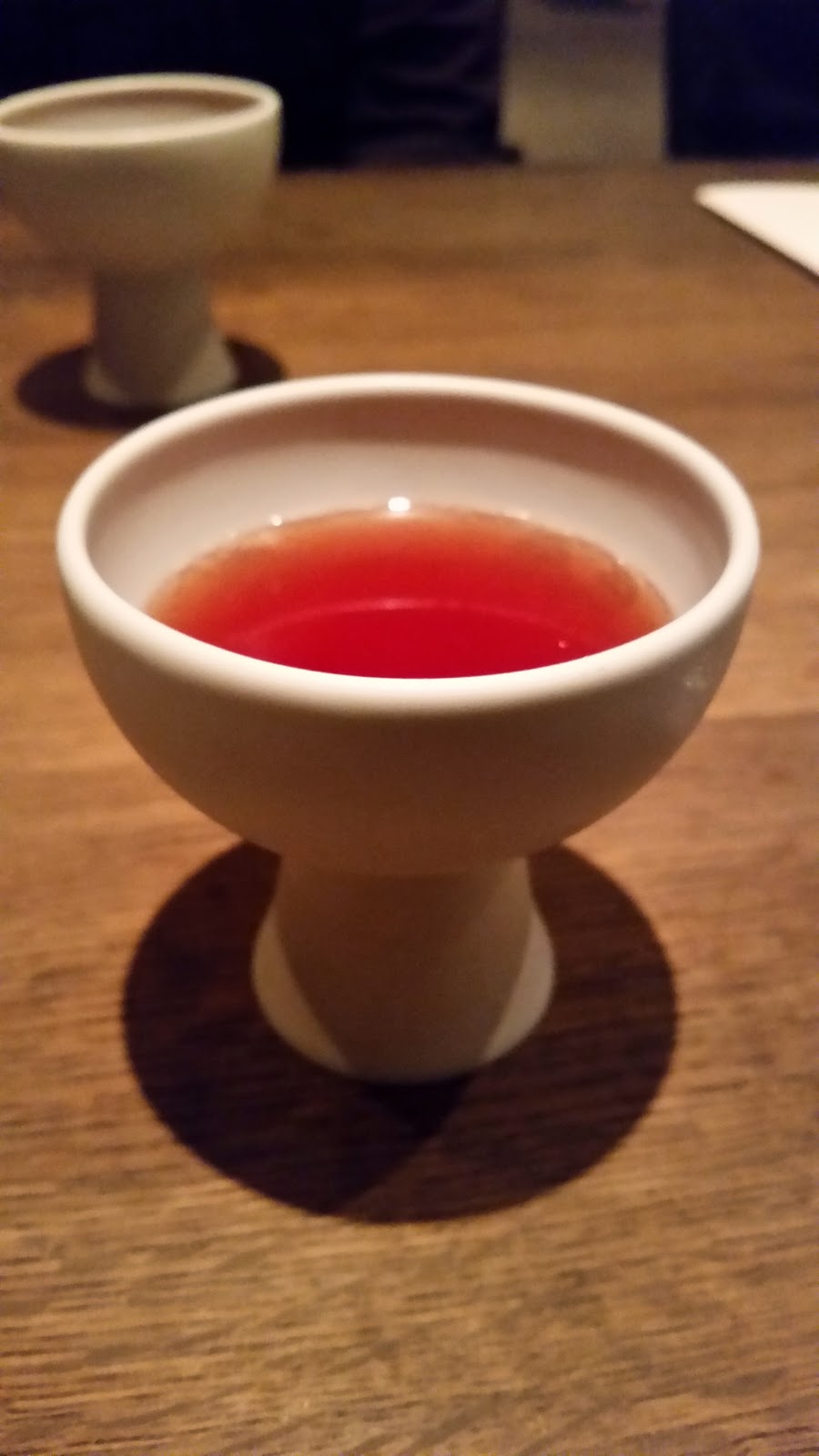 Then we got some rice kombucha as a palette cleanser before dessert.  Basically a tasty soda. 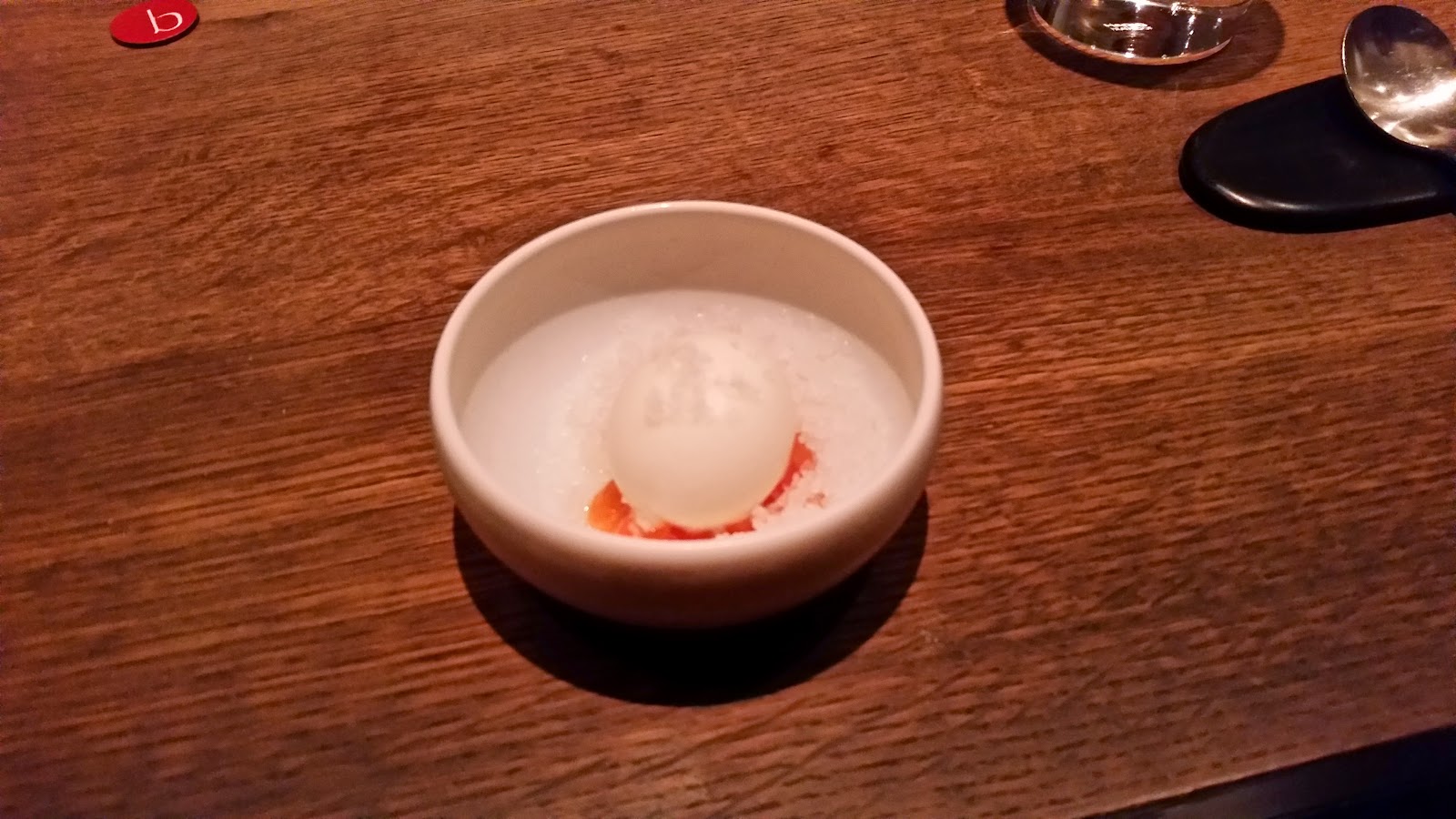 This was really good.  You can't tell in the picture but there are yuzu flavored "ice" sprinkled on top and on the side.  With the persimmon, just super tasty all around. 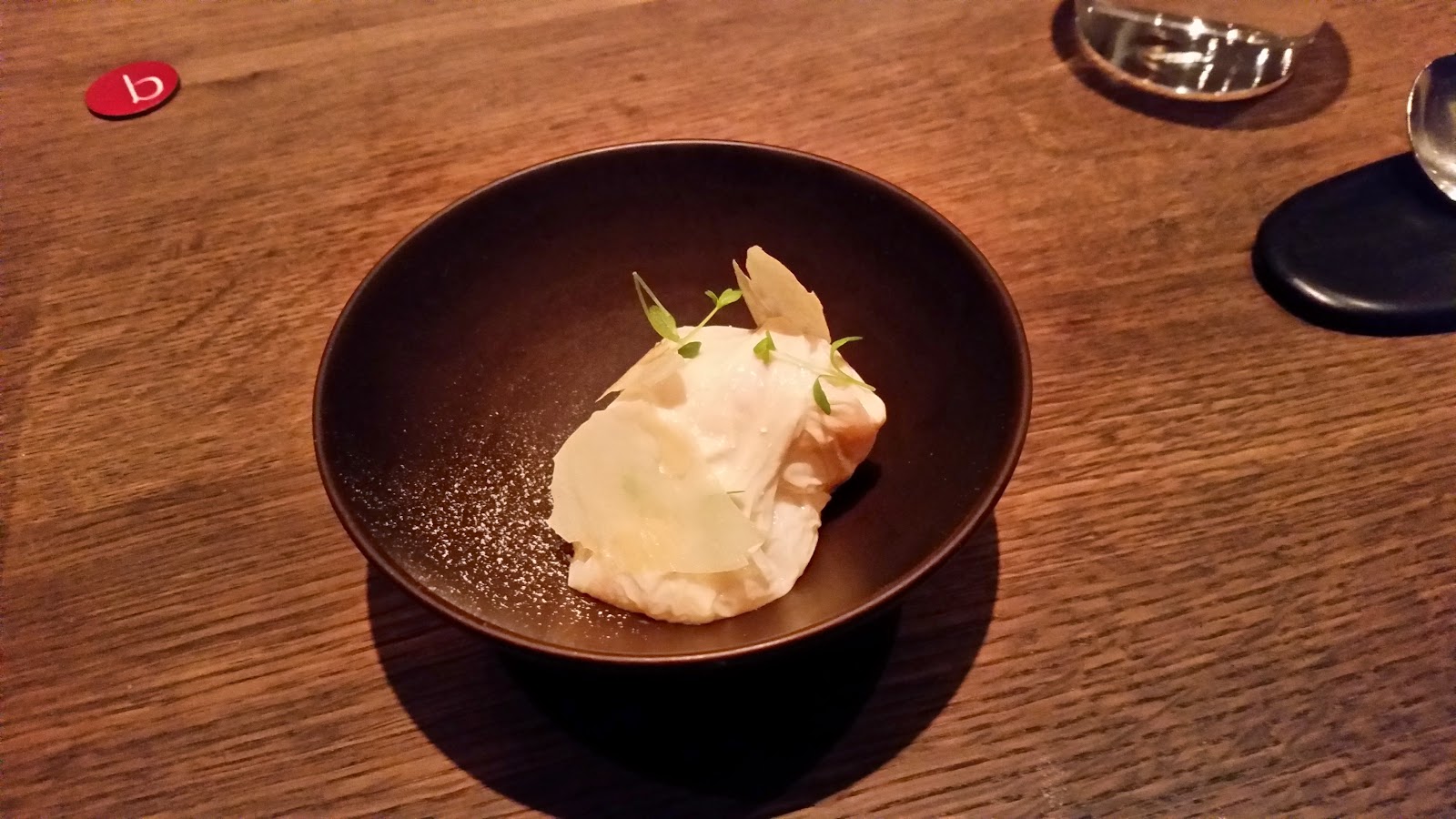 This was the only dish of the night I'd call "interesting".  Effectively, a white chocolate mousse/cream/something wrapped in tofu skin.  Using the yuba to wrap it was very interesting, something I'd never imagine for dessert.  It was still good, but when you were initially trying to dig into the dessert, you were a bit confused b/c ... well, it's tofu skin. 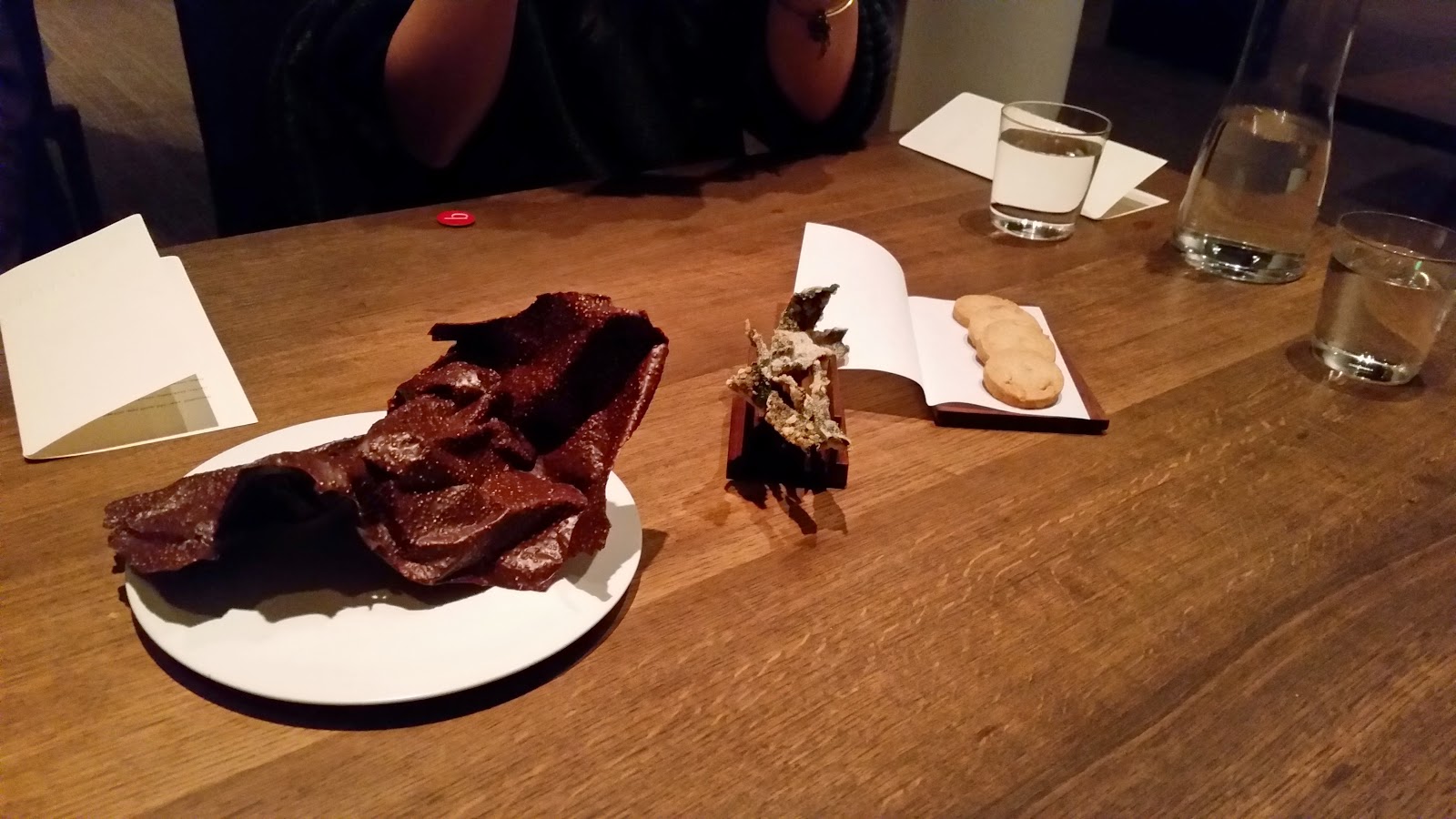 Overall, Benu was an incredible meal and probably the best one I've ever had.  Since it's a 3 Michelin star restaurant, immediately people began asking me how it compared to French Laundry.

For me personally, I enjoyed the meal at Benu more than French Laundry.  The reason is for the following reasons.

1) At some fine dining restaurants (especially the fancy "Michelin" style restaurants) part of the fun is eating new and interesting things.  Benu had far more experimental and interesting things to eat, which were also super delicious.  French Laundry is far more classic.  So while everything at French Laundry was delicious, there was a small part of me that thought, "But I've seen/had this before elsewhere ... not as good as this, but elsewhere."  It will be hard to find any of the Benu dishes anywhere else.

So overall, I enjoyed the experience at Benu a lot more.  Obviously, this is a lot to do with my personal tastes.  I imagine many people would love French Laundry a lot more.
Posted by Albert Chu at 9:10 AM