I have not played either Fallout 76 or Anthem.  However, I've been following the comments and reviews online, and find their reception very interesting.

Both games come from storied RPG developers.  Fallout 76 coming from Bethesda, the makers of Fallout 3, Fallout 4, and the Elder Scrolls series.  Anthem comes from Bioware, the creators of the Dragon Age and Mass Effect series.

Both companies have storied history creating incredible worlds and stories, but they've all been single-player RPG experiences.

It's very interesting that both made a decision to create a multiplayer RPG at some point in the last 5 years, and both released it in about a 3 month window of each other.

And both games have not been received as well as their prior single player RPGs.

Lets start with Fallout 76, which was released in November 2018.  The game is averaging a review of about 50/100 on most of the review aggregator sites.  It puts the game squarely in the "poorly reviewed" category, it's not even close to "mixed reviews".

As far as the reviews go, it seems that the general commentary is that by taking a single player game that concentrated on story (including quests, NPCs, etc.) and turning it into a multi-player game where you interact with other humans, just made the game terrible.  Unlike MMORPGs, by trying to mix multi-player into a single-player like gameplay just didn't work.  Other human players were simply not as interesting as NPCs.

In addition, the single player Fallouts weren't considered good shooter games.  But one has to remember they don't have to be.  The primary focus of the game was on the solo-story aspect.  So the shooting mechanism was there as a necessary way to fight enemies.  But transform that into a multi-player shooter, and the reality is there are a many better shooters out there.

Add in a bunch of bugs, and you have a game getting an F grade overall.

The story of Anthem's reviews seems much the same, although not quite as bad.  The review averages seem to be converging in the low 60s range on aggregator sites, so it's just hanging onto the "mixed review" territory.

Bioware attempted to make a multi-player shooter, but have a solo-RPG story for the user.  Most of the reviews thus far have panned the mixture.

The reviews of the shooter aspects of the game are generally good, but the story and the purpose of the game have been heavily criticized.

Although I cannot find the review, the best comment was one that stated that if the game were only a shooter game, it probably would be ok.  Imagine you are playing the game with friends (b/c its multiplayer).  In most shooter games, you go shoot things, get loot / win / whatever, then try to shoot more things again.

But it completely fell apart in Anthem.  Instead, you go shoot things, get loot, have to go walk around a city by yourself, talk to people (by yourself), then go configure your fighter (by yourself), then eventually after many minutes, you can go shoot more things.  If this is a multi-player game, how are you supposed to enjoy playing with your friends when you have to run around by yourself so much?

There are other criticisms that aren't important to go into (weak story, poor missions, etc.).  Add in the fact that the shooter game doesn't even have PvP, then people begin to wonder what kind of game it is.  Now you have a game that is averaging around a D- grade.

I find it so interesting how both Bethesda & Bioware went the multi-player route with poor results.

Was there industry pressure to create multi-player games even though their experience was single player?  To have microtransactions in games?

Yet, to appease their fanbase, to try and add a similar single player RPG experience into the game?

Naturally, one then wonders how these companies will react given the bad reviews of these multiplayer games. Will they go back and try to create a new / great single-player RPG?  Or will they dig in their heels and continue with multiplayer going forward?
Posted by Albert Chu at 7:02 PM No comments:

Email ThisBlogThis!Share to TwitterShare to FacebookShare to Pinterest
Labels: videogames

So not too long ago a friend of mine picked up the video game Night Trap for the PS4.  For those who don't know the history, Night Trap was a terrible video game made in the early 1990s for the Sega CD console.  The game was made using full motion video and was controversial at the time, leading to it being brought up during congressional hearings.

Apparently when the game was re-made for the PS4, it also came with a way to view all of the scenes in the game so you could piece together the actual story.  I guess some people have been piecing those clips together to make a movie:

The "movie" is so bad, it's actually good.  Obviously some of it was b/c it was all filmed for a video game, (breaking the 4th wall, bad guys walking slow), but add in the cheesy B movie acting, a cheesy video game song, terrible sound effects (I think "dentist drill"), terrible special effects, a ridiculous plot, it's wonderful.

Some of the hilarious oddities I couldn't help but laugh about

I first heard of Rich Table around 6 years ago when the San Francisco Chronicle pondered why they weren't given a Michelin Star.  Well, they eventually captured a Michelin Star in 2017 after many years of praise locally.  Reservations are hard to come, as Rich Table has regularly been considered one of the best gourmet-casual spots in the city.  But I was finally able to snag a reservation for a Saturday at a time I could make.

Rich Table's menu is divided into four chunks: snacks, appetizers, pastas, and mains.  The pasta is said to be "primi" sized and not really entree sized.  There's also a chef's picks for $99 per person for about 6 courses.  The chef's pick apparently goes with both menu and off menu dishes.  If you go the a la carte route, the waitress recommended 2-3 snacks, and an appetizer, pasta, and main to share.  We followed her suggestions for the a la carte route, and here's what we got. 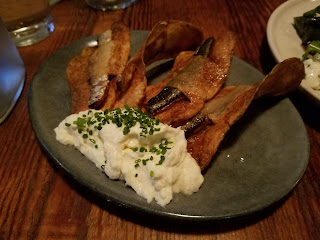 This is apparently a signature snack from Rich Table and it's priced $2.50 per chip, which you can see is a chunk of sardine weaved into a potato chip.  We didn't know how many to order and just ordered 4 for the two of us.  I think that was the right amount, as 1 each would have been too little. 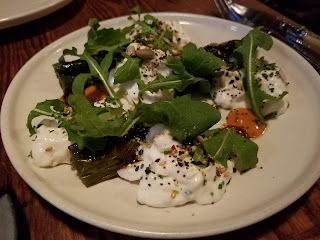 This dish was the appetizer that we ordered, the restaurant brought all the snacks and appetizers out at the same time.  I had expected the dish to be more "balanced", like a salad, but the dish was mostly burrata.  But this ended up not being an issue, because the burrata was delicious.  I can't remember having a burrata that was quite light in this flavor and creamy as well.  I think I would have enjoyed it paired in a typical salad instead of with roasted leeks though. 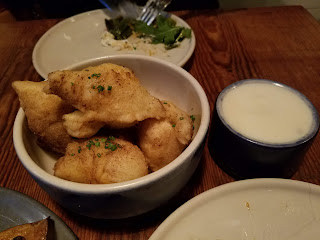 This is apparently another semi-well known snack from this restaurant.  Doughnuts, lightly sprinkled with dried porcini powder, which you can dip into melted raclette cheese which you can you on the right.  Overall, lots of umami in this dish.  There are 5 small doughnuts served, which maybe is a tad high for 2 people.  It would be better for this to be ordered in a group. 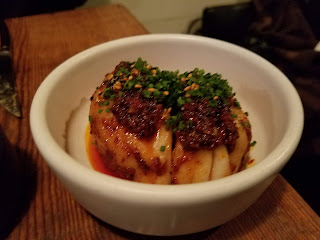 The wontons were listed at $5 each, so I didn't quite know what to expect.  I had expected them to be huge, but these were more medium sized.  Overall tasty, with a lot of umami from the chili paste on top.  The dumpling skins were particularly good, chewy but not too thick.  Good, but I'm not sure these were worth $5 a piece. 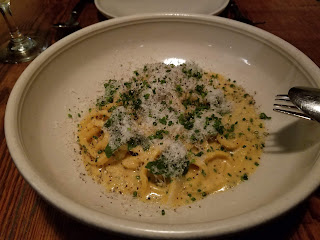 Other than the fact that this was a pasta dish with sea urchin, I had no idea what "cacio e pepe" or "idiazabal" was.  Well, the former is a type of pasta and the latter is a type of cheese.  Overall, really good dish, creamy, rich, with the pasta perfectly al dente.  I appreciated the fact that the dish was a "primi" size portion of pasta, and not some gigantic pasta dish.  Otherwise we wouldn't have been able to eat ... 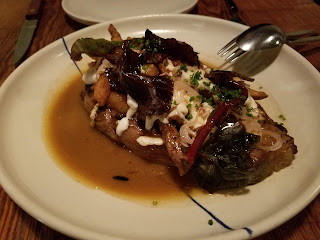 So we picked this entree somewhat at random, just b/c we hadn't had a steak in awhile.  It was topped with the restaurant's version of poutine.  You can clearly see the gravy sauce, but there are pieces of fries on top with cheese and some vegetable (perhaps a swiss chard or kale).  I thought the topping of the poutine was an interesting choice.  I actually enjoyed eating the poutine a bit by itself, b/c it was really good with perfectly crisp fries.

But in combination with the steak, I'm not really sure I enjoyed it that much.  I should say the cheese as a sauce for the steak was good but was a bit perplexed by the combo.  The steak was cooked a perfect medium.

I should mention that this steak was gigantic.  I think we were expecting around a 8-10 oz steak to share, but this was more like a 14-16 oz.  If it were a steak by itself, that'd be one thing, but with all the fries on top, it was more food than we expected. 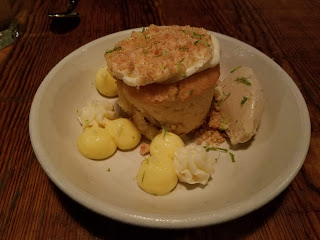 Due to the gigantic steak, we decided to just share one dessert.  Given it was cold and raining this day, we rejected several of the other "cold" desserts and went with this coconut cake b/c we figured it was the least cold dessert.  This cake was delicious, which sprinkles of coconut, frosting, and lime curd dotted all around.  I didn't think the brown butter ice cream had quite the flavor I was hoping for.

Overall, a great meal.  We put the meal on a similar level of Aster and Al's Place amongst the city's gourmet-casual dining spots.