Michael Mina has long been considered one of the best restaurants in San Francisco.  It held 2 Michelin Stars at one point, eventually lost both stars, but has been holding steady at 1 Michelin Star.  The last San Francisco Chronicle review gave the restaurant a 3.5 star review.

I finally got to try the place out with some friends the other night.  The restaurant currently offers a 5 course price fixe menu or a tasting menu.  We went with the tasting menu.  The tasting menu dishes are a secret before its brought out, although I saw the menu online before we went so it was only a half-secret. 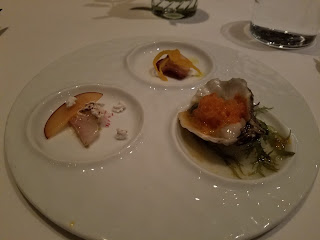 I thought it was pretty cool to bring out three amuses out on one dish, which I don't believe I've seen before.  On the left we have kampachi with (I think) plum and popcorn.  Up top we have octopus with some sauce.  On the right we have oyster with some sauce I don't recall.  I especially liked the kampachi. 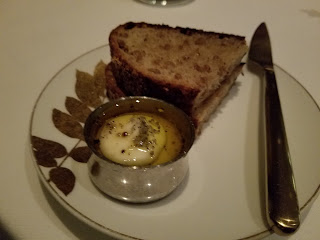 I often don't post pictures of bread, but I'll post this mostly b/c of the butter.  It's a butter, ricotta, and honey mixture.  It was delicious. 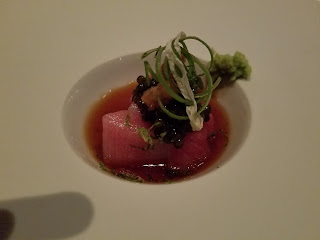 This was delicious.  Could have come from a high end sushi restaurant.  Also came with some fresh grated wasabi, which they did tableside for a few of us. 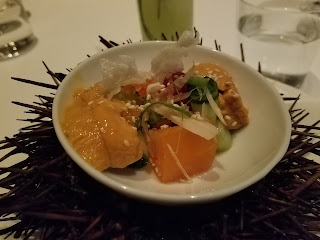 I'm normally not a fan Santa Barbara uni, but I really enjoyed this.  The staff said this uni was alive just before it was served.  The uni was more creamy than I am used to it being, unsure if it's due to the freshness.  Also included in this dish was tomato and trout roe. 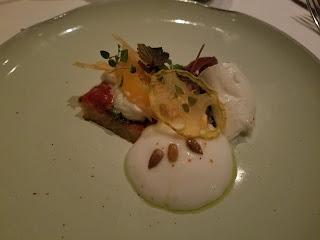 I honestly did not expect to like this dish, as it appeared to be a fancy form of caprese salad.  I had to look up what "noble tonic" is, and it appears to be some maple syrup, which is their fancy balsamic in this dish.

However, I was pleasantly surprised.  Somehow everything really came together much better than I had expected.  Included were 4 different heirloom tomato types, some lemon verbana foam, a tomato crisp you see on top.  I'm unsure if it was dried or fried to create the crisp, but it was especially good. 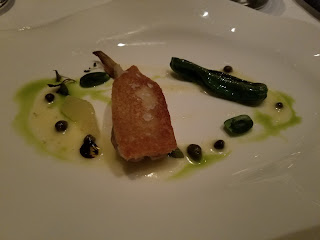 I had never had "sugar toad" fish before, but really enjoyed it.  The skin was particularly amazing, as it was a thick crust unlike any other fish I can recall.  Included on this dish was some citrus on the left and shishito pepper on the right. 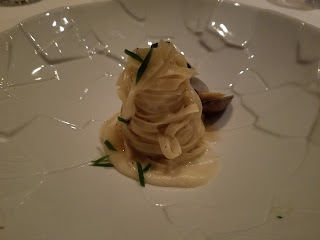 This pasta was delicious, much stronger flavors yet not overwhelming. 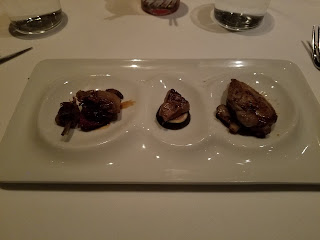 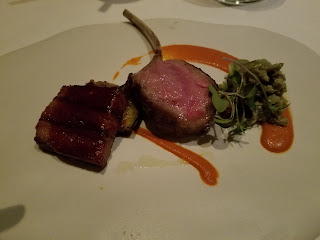 I had no idea what matbucha is, but apparently it's a tomato & pepper sauce, which is the orange-ish sauce you see in the photo.  The waiter said it's a sauce with South America origins, but online they say it's got African origins.  Oh well.  Pretty good, although the tomato based sauce wasn't a flavor that met my particular taste preferences.  I really enjoyed the eggplant and the lamb-belly on the left. 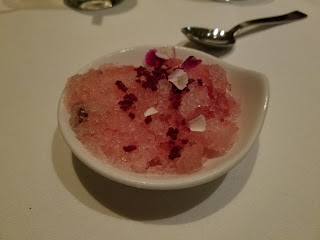 This was the off menu palette cleanser.  I think this is the first time I've ever had shaved ice as a palette cleanser as its normally sorbet.  But given the dessert below is sherbet, I guess they wanted to go non-ice-cream like.  Overall pretty good.  The compressed watermelon was hidden underneath of course.  I'm not sure what the crunchy red things on top were, but they were tasty.  Some dried fruit of some type. 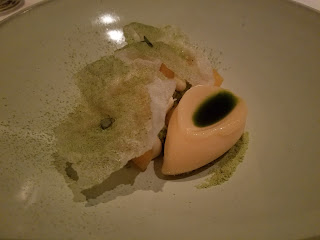 This was a great dessert, one of the best I can recall having (although TBD if it'll get into my top ten).  Melon sherbet on the right, shiso cake & chunks of melon on the bottom, covered up with crispy stuff.  Delicious. 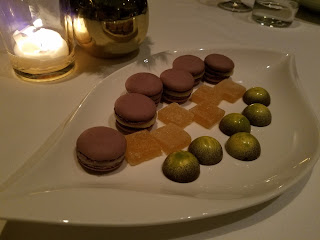 Obviously this is for the group and not just me :-)  I believe it was yuzu macaron, lemon pate de fruit,  and kaffir lime chocolate.  The chocolate was my favorite of the three.

One of the interesting things about this meal is that it was about 4 hours long from sit down to bill being paid.  That's really long given the relatively small number of courses.  As a random contrast, French Laundry was about 3 hours and 15 minutes, and Atelier Crenn was less than 3 hours despite 19 courses of food being brought out.  We were a group of 6 instead of just the typical two of us, so perhaps that was part of the reason for it taking such a long time.

Overall a good meal.  I will say that at $195 the price for the tasting menu feels a bit high for the bay area.  As a contrast, 1 Michelin starred Californios clocks in at $157 right now.  2 Michelin starred Commis in Oakland is at $159 now.  It's possible this price is due to being located in San Francisco's Financial District, which I'm sure has some premium attached to it.
Posted by Albert Chu at 8:55 AM No comments: