With Jacob Degrom seemingly flirting with history this year (0.54 ERA through 11 starts), I was reminded of Orel Hershiser's scoreless innings streak in 1988.

Granted it was a different era of baseball, but I saw this on baseball reference and it just blew my mind.

Yup, that is a big fat zero earned runs given up over the entire month of September.  With 5 shutouts in a row and it would have been 6 if the Dodgers had bothered to score a run in his last start. 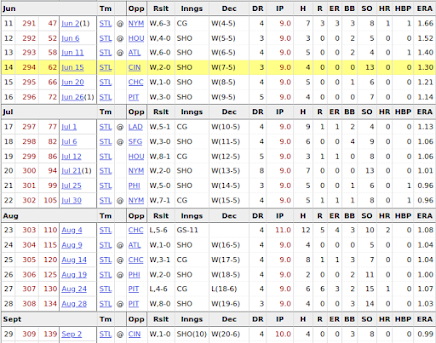 Again, it was a different era of baseball, but damn.  That's 19 (effectively) complete games in a row with 12 shutouts in the mix.  His ERA fell below 1.00 twice during that span.