We’ve said all along we make buying decisions based on performance. We’ve got thousands of brands – more than 2,000 offered on the site alone. Reviewing their merit and making edits is part of the regular rhythm of our business. Each year we cut about 10 percent and refresh our assortment with about the same amount. In this case, based on the brand’s performance we’ve decided not to buy it for this season.

Some, such as the President, think the issue was political and not based on sales.  But using some game theory logic, I think it's very likely the case was sales related.

Assume there's only two groups of customers before the election.

It's almost certain some percentage of non-Trump supports would stop buying brands that were associated with Trump.  These people come from group 'A'.

The question is, for the customers lost in group 'A', would other customers make up the sales difference?

If you're an Ivanka Trump fan and a Trump supporter from group 'A', it's unlikely you can makeup the difference.

Hypothetically, lets say you have two customers, each who loved the Ivanka Trump brand and bought 10 outfits from her in the past.  Going forward, one customer says she'll never buy Ivanka Trump again but the other really wants to support Ivanka Trump going forward.  Will the Ivanka Trump supporter buy 20 outfits in the future to offset the loss from the other customer?  Unlikely.  She might be generous and up the purchase amount to 11 outfits, but that's it.

To make up the difference, you really need customers from group 'B' to make up the difference.  However, if you didn't like Ivanka Trump merchandise from the start (i.e. it's style, it's fit, don't need that type of clothing) it's unlikely you'll ever flip over and start buying it.  There may be a small few that decide to flip over just to support her for the sake of supporting her, but it's hard to imagine that group being large enough (i.e. most people will not buy something they don't need or won't use).

If Ivanka Trump merchandise were some general clothing commodity needed by customers (i.e. tube socks, underwear), you might be able to make the argument people could switch over.  But given it's supposed to be a lifestyle brand, it's hard to imagine the switch happening.

If Ivanka Trump merchandise were a major "destination brand", such as a Coach, Michael Kors, Kate Spade, etc. her brand could perhaps weather the storm temporarily.  Unfortunately, she's not in that category yet.

It seems that Ivanka Trump perfume has shot up to a top seller on Amazon.  This is perhaps the perfect example showcasing the counterpoint.  As a single "commodity" item ("commodity" here meaning interchangeable), it has a chance to have sales even out or go up.  If you are a person who generally buys perfume, lets say one bottle a year, you can easily switch over if you hadn't bought Ivanka Trump merchandise before.

I first heard of Californios several years ago when it was awarded a Michelin Star.  It really caught my eye because it is (to my knowledge) the only Michelin starred restaurant in the Bay Area that does a tasting menu based on Mexican cuisine.  It's been high on my list of restaurants to try out for some time and I finally hit it up this past weekend.

Just like my last tasting menu experience at Oriole, Californios chooses to not tell you the dishes you'll be served ahead of time.  Instead, you'll be surprised by what they serve you and you'll get a copy of the menu at the end.  The menu they give you at the end doesn't list each ingredient in each dish, so many of the descriptions below are based on my best recollections. 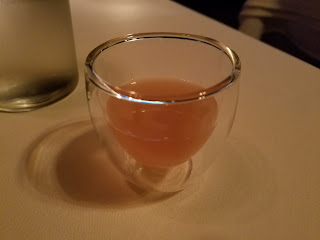 First up some agua fresca to cleanse our palette.  This agua fresca was grapefruit based.  There were some other flavors, but I can't recall all of them. 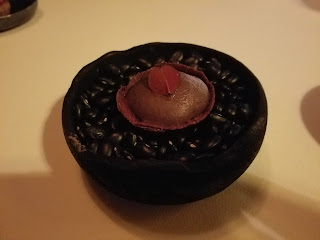 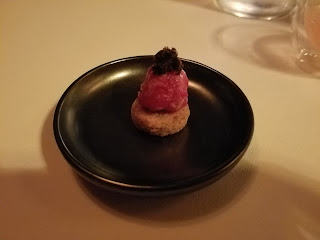 These were two corn based snacks to start the meal.  The first one was with some type of black corn with a shrimp ceviche.  It was delicious.  The second one was another corn (can't remember the type) with wagyu tartar and some truffle on top.  It was served warm so the corn hits your tastebuds first.  Also tasty, but not as good as the top one. 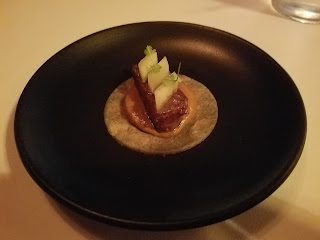 This may have been my favorite dish of the night.  This was a taco with some sauce (can't remember), super soft beef cheek, and apple slices on top.  The combo of textures and flavors was really good. 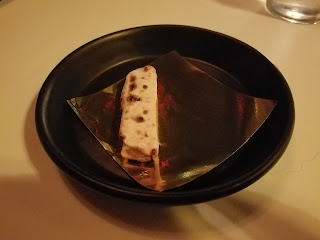 This was duck confit and kumquat in a tortilla.  I liked the kumquat hits in the middle of the duck. 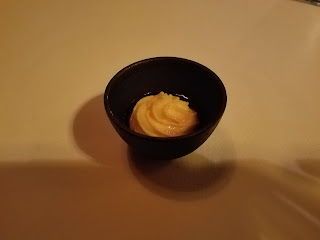 This was a palette cleanser sorbet of some sort.  Sorry, but I can't remember the flavor at all.  All I remember is they poured a liquid on it to give it a bit of a margarita feel to it.  There were some jellys and pomegranate seeds in here too. 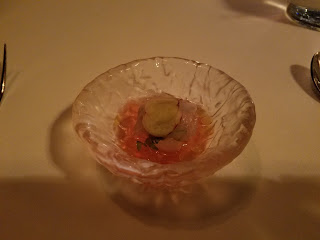 This was a Japanese fluke ceviche with shiso in a cranberry juice liquid.  Really really good.  The juice had a kick to it, which was apparently from shiso. 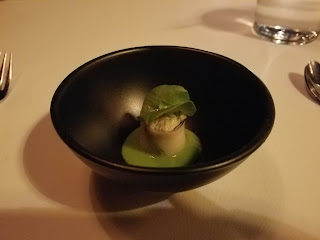 I can't remember the ingredients in the sauce at the bottom, but the primary part of the dish is crab wrapped in radish and I think the top is nasturtium.  Also good. 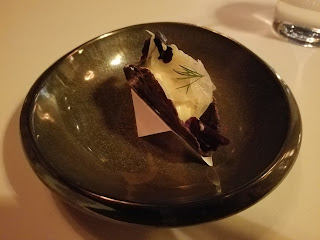 This was a lobster taco with (I think) sour cream and fennel on top.  This was really really good. 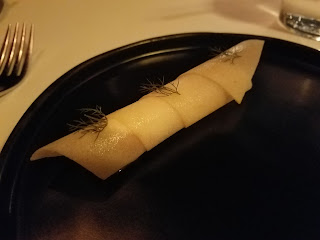 I can't remember the details but this was meant to emulate a Mexican fruit dish of some sort.  It's a fuji apple variant wrapping goat cheese and some hazelnut butter underneath.  Really good although I wish there was another fruit variant in the mix to give it another flavor twist. 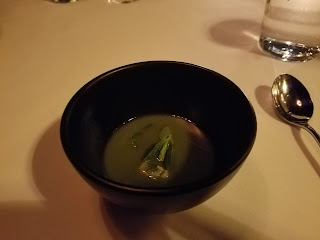 This was a pork based broth poured over some abalone.  I believe the herb in the soup is "chickweed".  The first thought I had when eating this was the abalone was so soft and tender, not chewy like other places (including even 3 Michelin star Benu). 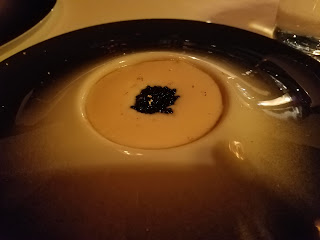 This was the other maybe my favorite dish of the night.  The dish was a layer of atleast two different types of beans with some hackleback caviar on top.  The top layer was very airy, with the beans whipped/foamed in some way.  The different textures and the caviar were delicious together. 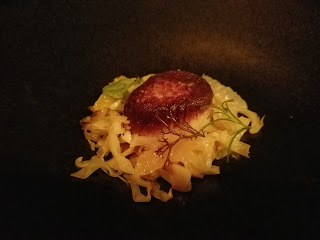 Another tasty dish, this was scallop, with cabbage, limes, and a chipotle chile on the bottom. 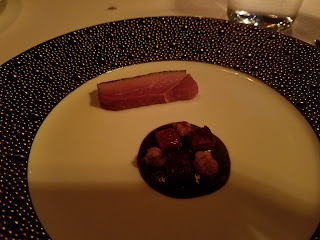 This was duck with a mole sauce, made with duck jus and some blood orange and candied walnuts.  Duck is often a hit or miss with me and this was definitely on the hit side.  Not too rare and flavorful with the mole sauce.  I would put it below the duck at Keiko a Nob Hill, but better than Aster and La Folie.  The mole sauce was good, although I think it could have done without the walnuts.  I feel the texture difference was just too big of a contrast. 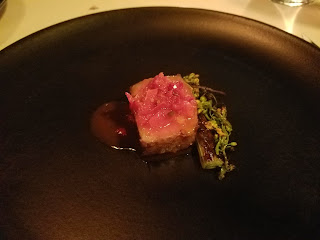 The waiter said this was sort of a deconstructed carne asada, using A5 Wagyu from Japan.  Included was some leeks and mustard blossoms (?) on the side.  On top, some tomato/onion sauce was poured on top.  Really good.  I actually liked this more than the wagyu I recently had from Oriole. 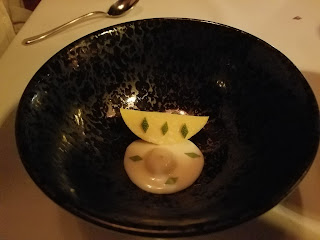 This was a key-lime pie kind of deconstruction.  They wedge was a key-lime mousse/ice cream kind of thing.  I can't recall what was in the sauce at the bottom but it included pineapple (which was removed in my because I'm allergic). 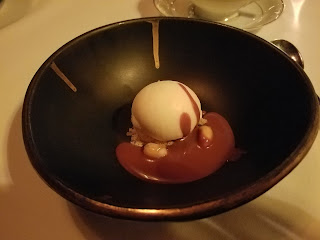 The last dessert was a peanut brittle dessert with some peanut ice cream, peanuts, and chocolate ganache.  This was the only miss of the night for me, but it wasn't the restaurant's fault.  I just dislike peanut flavor in general.  But the peanut flavor wasn't strong enough for me to hate the dessert. 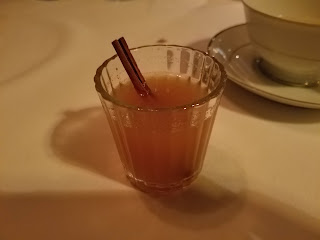 Finally, we got this punch, which was basically an apple cider.  I can't remember other ingredients in this.  It's typically alcoholic, but I requested this to be non-alcoholic.


Overall, I loved this meal.  It's somewhere in my Top 10 all time.  By incorporating Mexican ingredients, many dishes that may have seem "classic and good" at an American or French restaurant were suddenly given a twist to make them different and new.  The menu appears to change wildly, so I'm looking forward to going there a second time in the future.

The meal took almost 2 and a half hours.  I left he meal satisfied, although a bread course would have left me a bit more "full" at the end.