The Progress is a relatively new restaurant from the people from the famed State Bird Provisions.  State Bird Provisions is often cited as the most difficult restaurant to get into in the San Francisco Bay Area.  Unlike restaurants like French Laundry, the price does not make it prohibitively scary to much of the public.  Lines begin forming around 90 minutes before they open and reservations are nearly impossible to get.  In fact, the restaurant even got written up in several tech websites about how Silicon Valley engineers were writing bots to fight for reservations there online.

Anyways, given how impossible it is to goto State Bird Provisions, I thought checking out The Progress was about as good as I could do.  From what I've been told, the food is very similar there and the lines are presently non-existent.

So The Progress is a little interesting, as it's a price fixe menu and everything is shared family style.  The more people in your party, presumably the larger the portions.  So take into account that all servings below are made for two people.  I would assume with larger parties everything would simply be larger.  The time we visited, there were 6 courses for $65 a person.  You can pay more for more courses, but the 6 courses were more than enough to feel stuffed by the end. 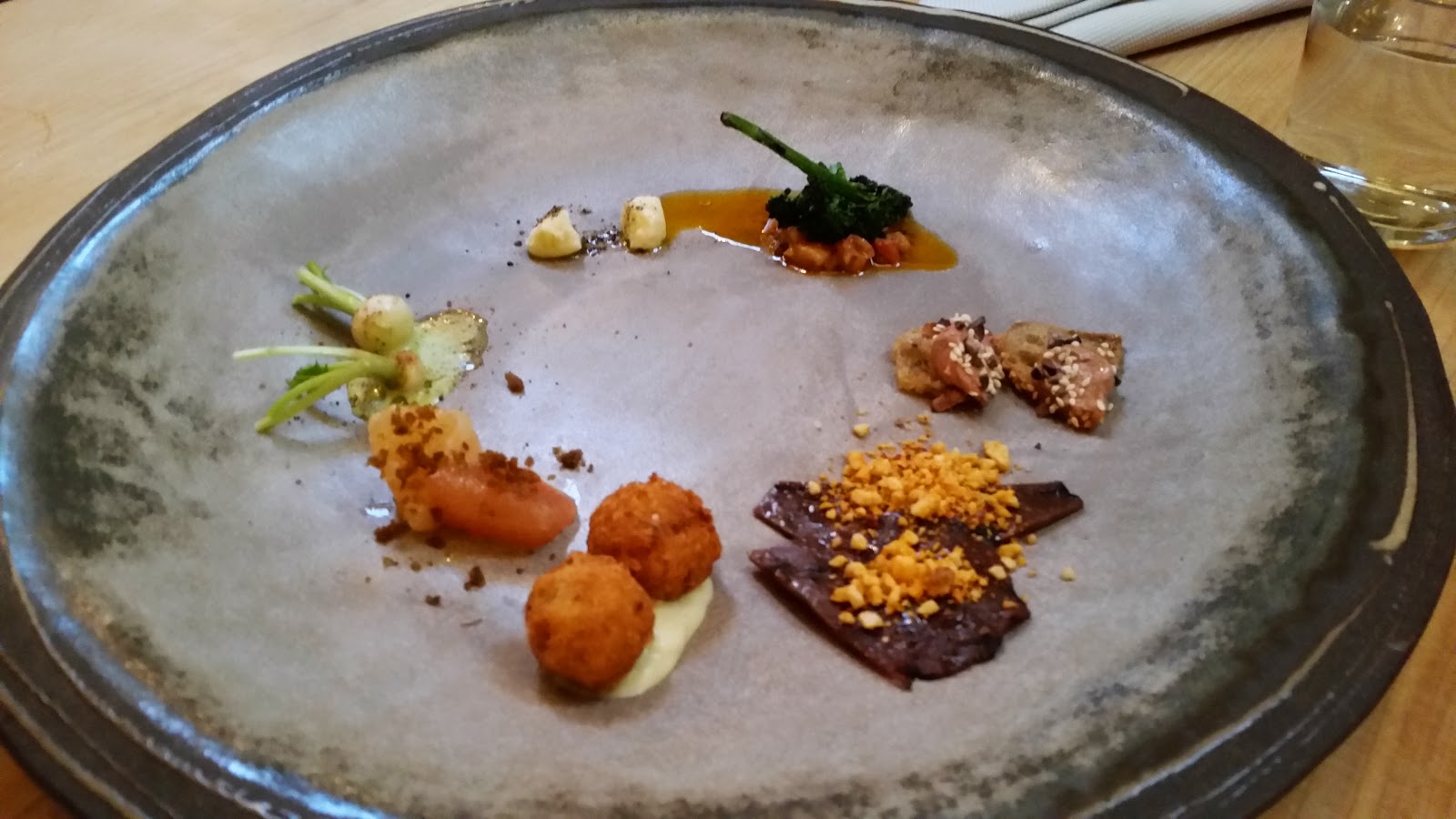 This wasn't on the menu so I don't remember everything on this plate.  From the left going clockwise, turnips w/ some green sauce, house made cheese, broccoli with some pickled stuff, chips with a pate, beef jerky with peanuts, croquette with some sauce, and pomelo with something on it.  My favorite was the house cheese, followed by the beef jerkey, and the croquette.  Overall, all the little snacks were tasty.

Because things are served family style, the "courses" don't really come out one at a time.  They brought the six dishes out in two "waves".  There were 3 plates brought out and then the other three plates.  So when I say the "first course", it's somewhat random how things came out. 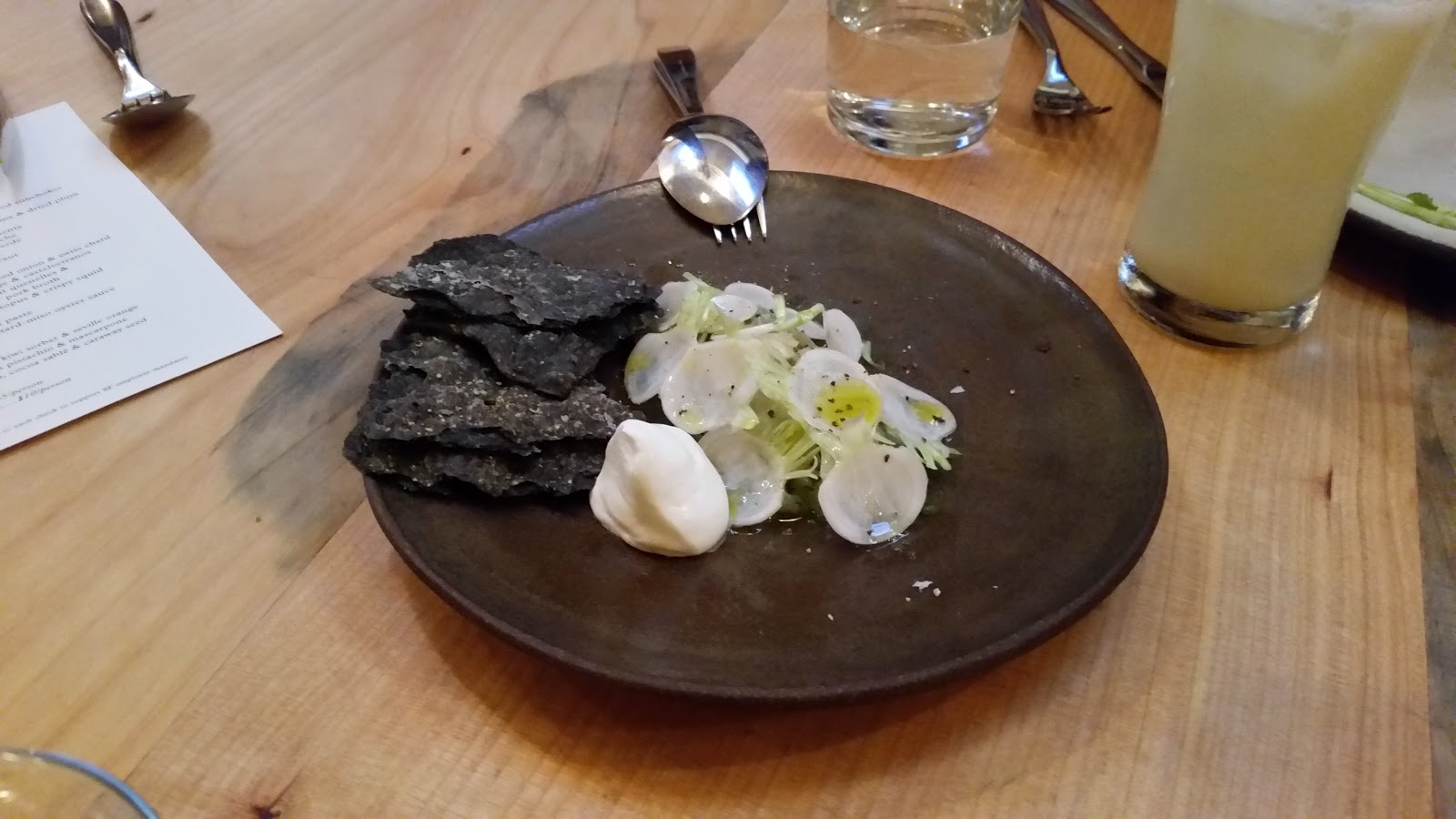 This first course was probably the best of the night.  It's hard to see in the picture, but basically beneath the mound of turnips was the fish and a sauce.  Just delicious. 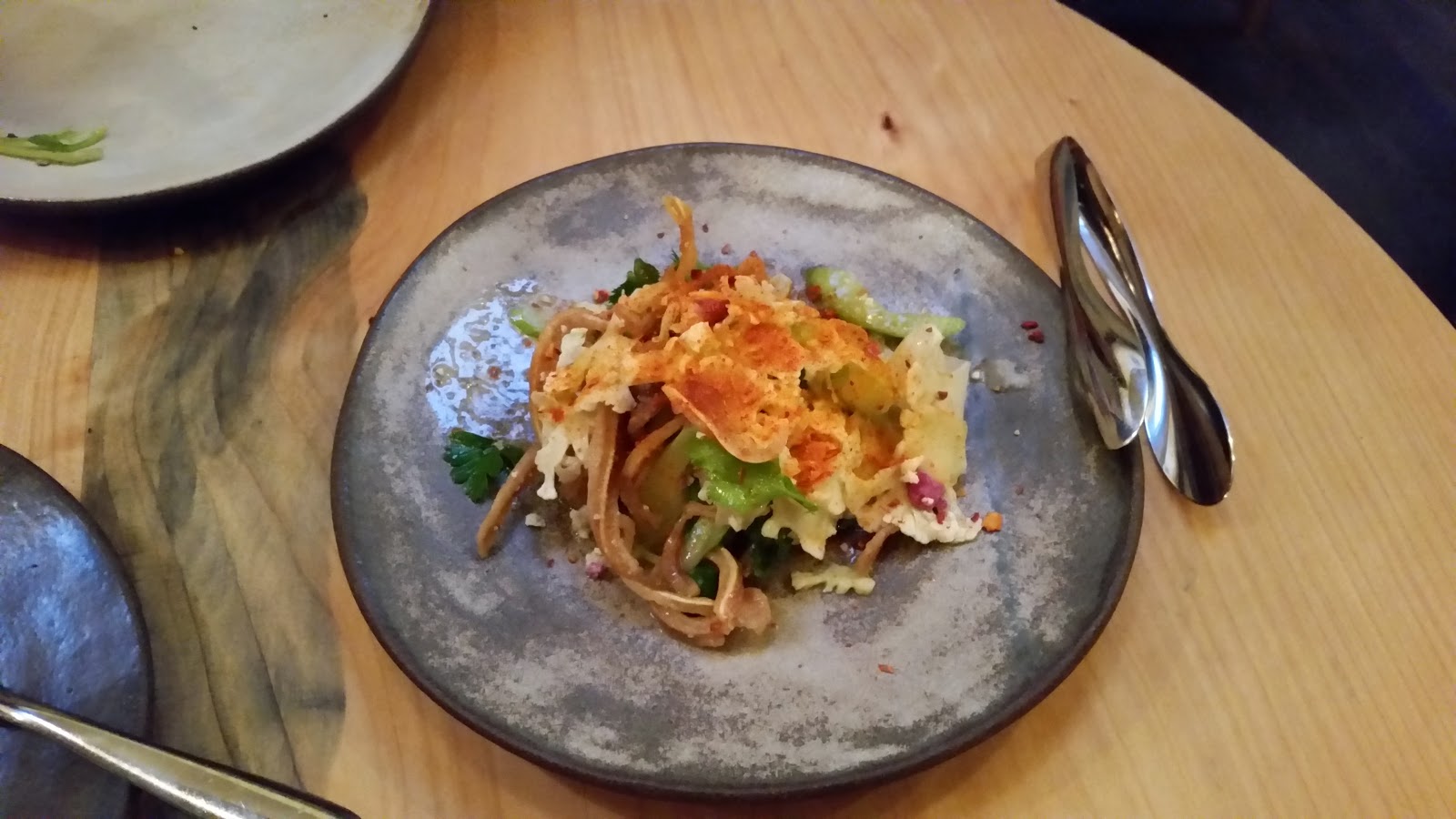 We selected this dish almost solely based on curiosity of what "pig fries" were.  It was basically deep friend pork belly and pig ears.  It was maybe my second favorite of the night and my date's top of the night.  The chili dressing with this was great. 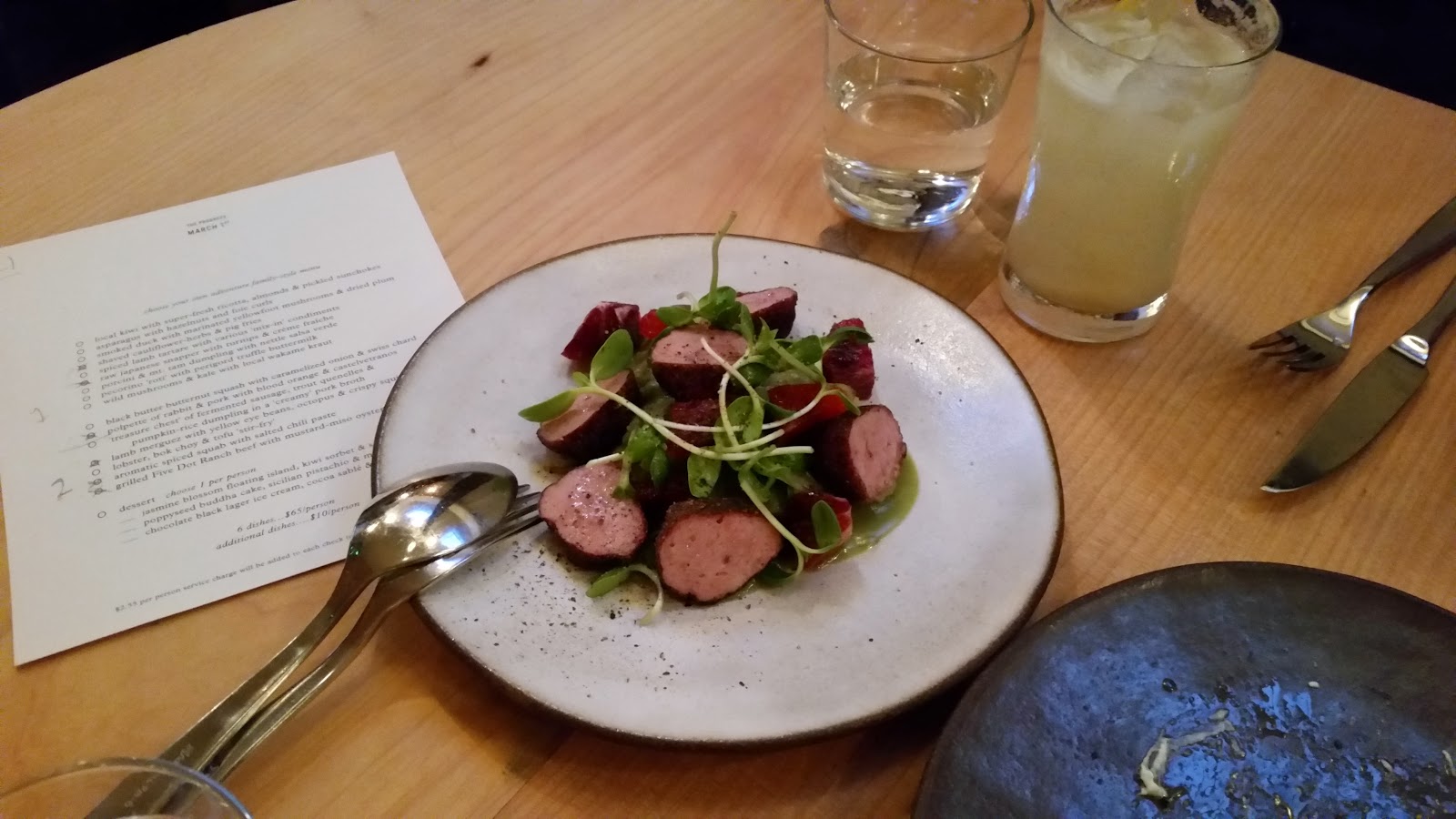 I didn't know what polpettes were, but they are effectively meatballs.  This dish was fine, but I wasn't particularly a fan of it.  It was both our least favorite of the night. 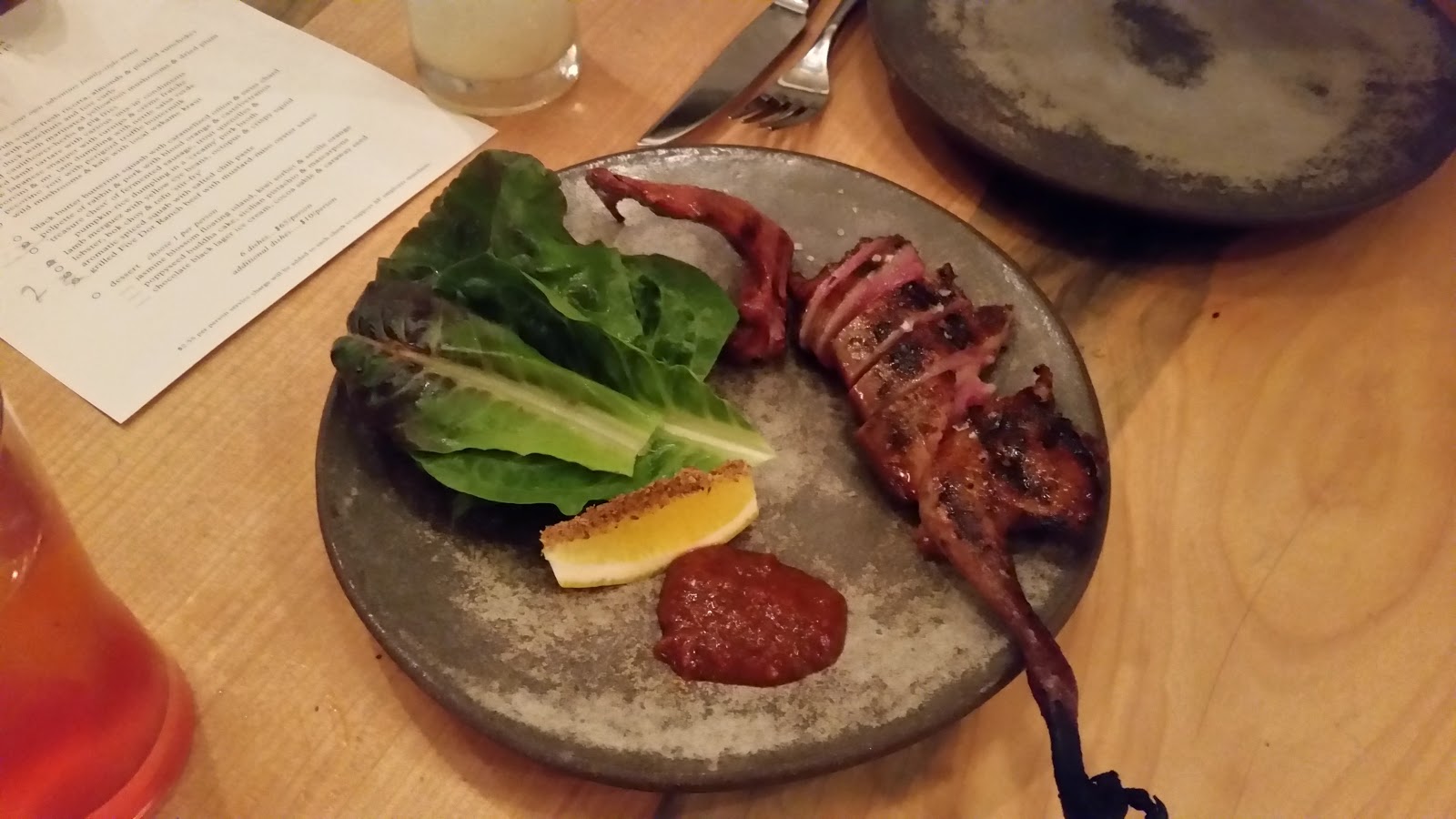 When this dish came out, I couldn't help but notice it was cooked a little rare.  I worried if it was going to be like the duck we had a Cotogna that was a tad chewy.  It was not.  It was tender and delicious.

We humorously tried to eat the meat off the leg and wing that was also served, however that proved fruitless as it was mostly skin and without much meat.  So don't bother if you get this. 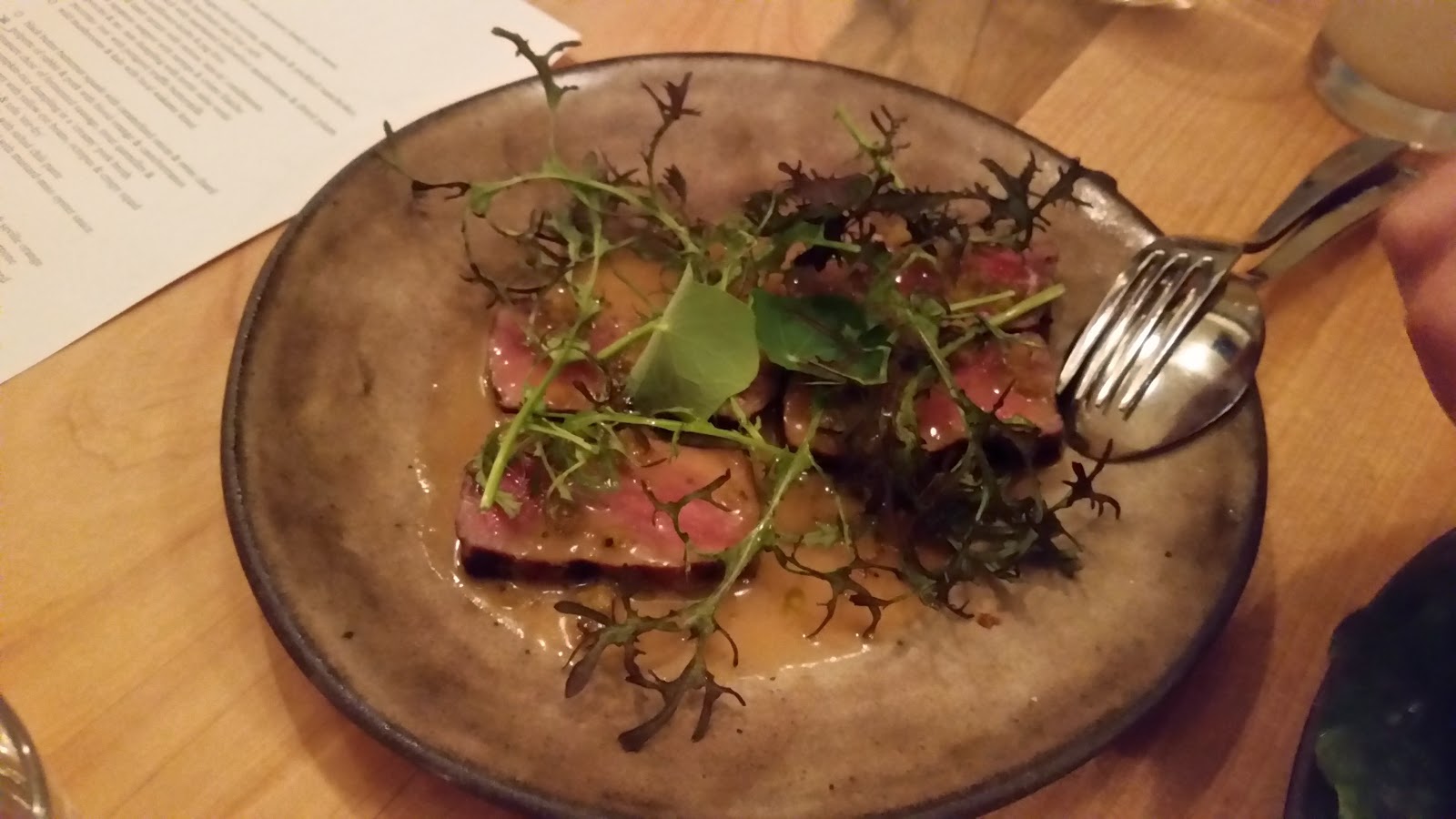 A solid dish.  The beef was tender and the sauce was tasty. 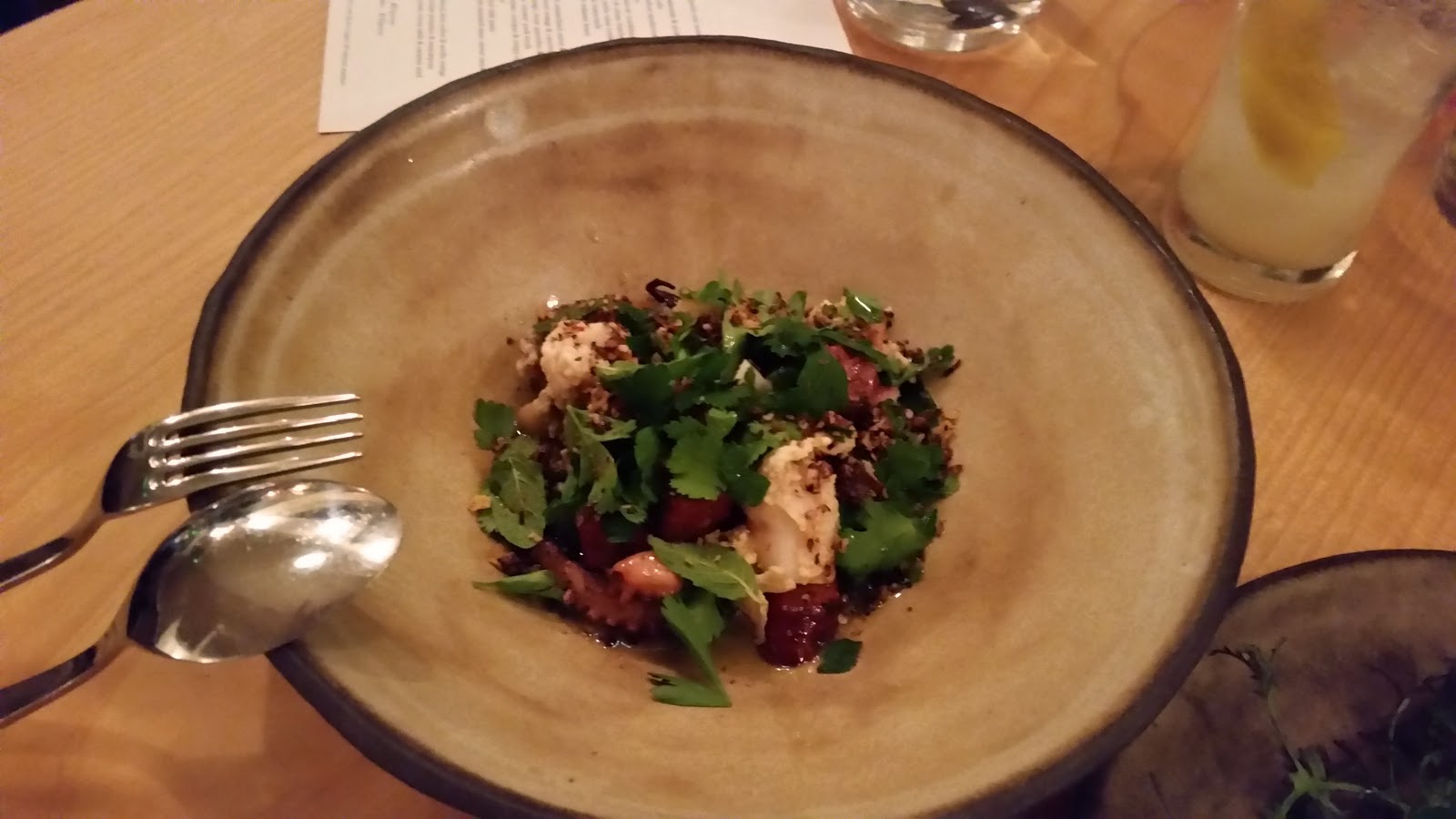 I didn't know what merguez was but it's basically sausage.  I was a little disappointed by this, as I felt putting something into sausage form takes away from the actual ingredient.  The rest of the dish was great though.  My second least favorite of the night.

At this point in the night my date and I were stuffed.  I think my date and I regretted selecting 4 dishes from the "heavy" section of the price fixe and only 2 dishes from the "light" section.  The last four meat dishes were quite heavy.  If we had to do it again, I think we would have picked one more from the "light" section and maybe selected a dessert instead of another heavy meat dish.  In addition, by selecting a dessert it would have made the meal a little longer and we probably wouldn't have been quite as stuffed by the end.  I'll take this as a lesson learned if I ever end up visiting Gary Danko, La Folie, or Terra or other similar price fixe menus.  Loading up on the heavier dishes, no matter how delicious it looks, is a bad idea.

Overall, a good set of dishes with (from what I've been told) the essence of State Bird Provisions.  If you're too lazy to wait in line like me, check this out of an easier alternative.