Over four years ago I was able to hit up Sons & Daughters in San Francisco.  Some friends wanted to hit up the restaurant (partially based on my recommendation :-) and wanted to see if I wanted to come along.  I couldn't say no.

When I first went, the restaurant was amongst the cheapeast tasting menus in San Francisco, I believe $105 per person.  It's a bit more expensive now, clocking in at $145 a person.  However, the menu is a few additional courses with the ability to pay for an extra supplemental course.

So here's what we had tonight.

1) Ratatouille with grilled focaccia and basil 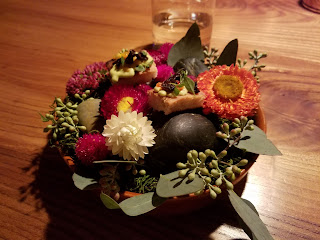 First up was this amuse bouche of foccacia bread toasted with some basil cream kid of sauce.  It was pretty good.  My friend joked if the above had edible rocks.  They were not edible :-) 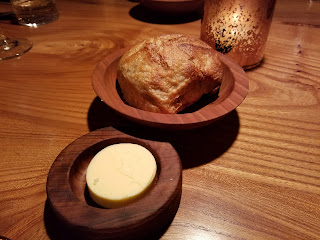 Not much to say here, good. 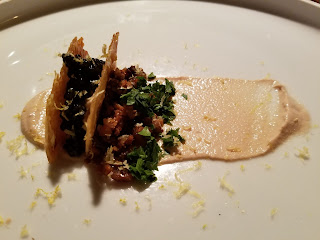 So this caviar course was the supplemental course.  It's probably the most interesting caviar course I've ever had.  So the caviar is on the left, on top of stewed chicken, surrounded by chicken skin "crackers".  To the right is some nuts/herbs.  I can't remember the sauce though.

Overall, the course was delicious, the flavors were really good, but I think it drowned out the caviar a bit.  I did find the chicken skin "crackers" really interesting. 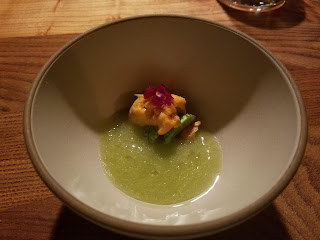 When the staff first mentioned this first, my thought was "melon and uni?".  It didn't seem to match, until I thought of melon and prosciutto, which somehow matches.  Overall, not a bad dish, but not my favorite. I think it was hard for me to process the combination. 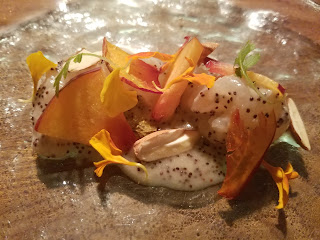 This was delicious, loved the poppy seed sauce on top of the crudo. 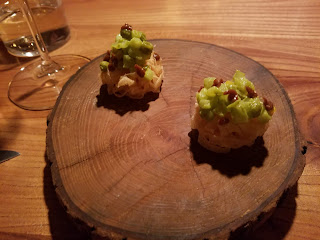 This wasn't considered an official course, but a random snack.  It tasted just like a samosa.  I enjoyed the texture of the fried dough ribbons on the bottom. 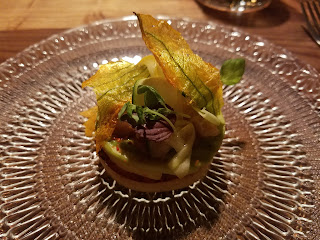 I think this was sort of like a fancy plated squash salad, with squash on the bottom, then some raspberry sauce, then avocado on top, and some fried squash blossoms to boot.  Overall pretty good, but I felt the raspberry drowned the other flavors a little bit.  I would love to see these flavors together in a bigger entree-ish salad somewhere. 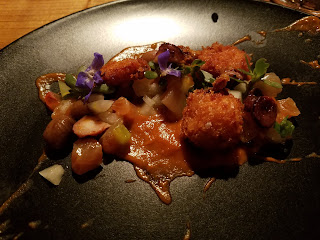 I wasn't sure what lomi-lomi was, but it's apparently a Hawaiian salad made with salmon and tomatoes.  Overall pretty good, although I might be biased because I recently had some incredible octopus at Mourad and Roister.  Any octopus dish right now would have had a hard time matching those dishes. 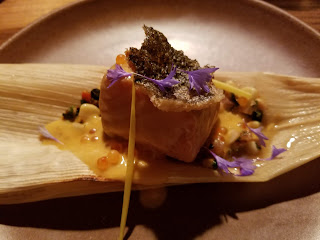 This was possibly my favorite course of the night.  Perfectly cooked salmon in a sauce of corn, trout roe, and (IIRC) clams.  I loved the crisped salmon skin on top. 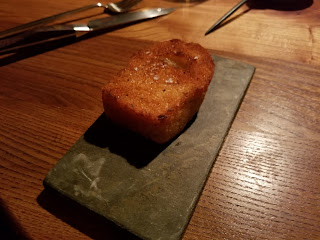 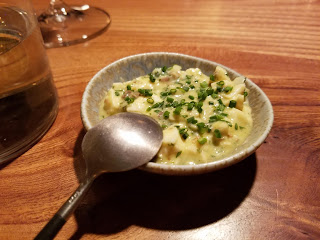 So instead of butter, they presented us this egg salad made with quail eggs to be used on top of our next bread course.  Surprisingly simple, yet delicious and a nice contrast to the typical bread & butter. 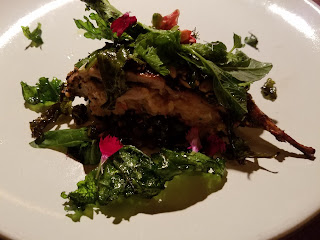 Another contender for best course of the night.  The quail was stuffed with rissoto and had an incredible rub on the outside.  I didn't pick up what the greens were, but I think it could have been lightly fried (or baked) kale.  It sat on a bed of "cang ying tou", which is a pork and (I think) chive Chinese dish.  Overall, delicious. 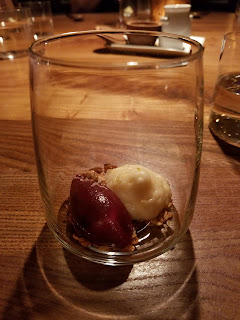 I love sorbet, and as far as palette cleansers go, this was delicious. 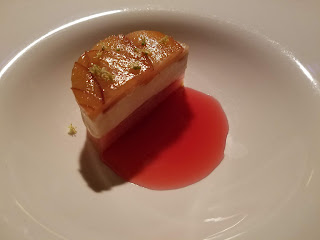 The last time I was at Sons & Daughters, their dessert was amongst my favorite of all time.  This one missed the mark for me, but it may be due to my personal tastes.  You see the compressed peaches on top and the white is the lavendar cream. The bottom layer (which I assume was the blackberry oolong tea) was an icy popsicle like layer.  I would have much preferred a cake-like layer, as the lavender cream and icy cold of the bottom layer just wasn't to my taste.

14) Financier with strawberries and white chocolate 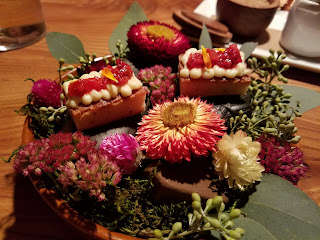 Finally, our mignardise was this cake with white chocolate and strawberries on top (I assume macerated and cut up).  Tasty, although I thought it was interesting they offered only this one mignardise.  It ends up it was because ... 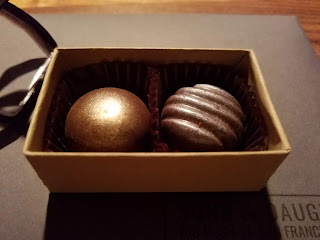 We were given this box of chocolates to go.  The one on the left was caramel, but can't remember what the one on the right was.

Overall a good second meal at Sons & Daughters.  I think it's interesting to compare and contrast this meal with the one I had in 2015.

In 2015, I think that Sons & Daughters presented a very good meal that was a bit more traditional American in its ingredients and flavors.

This meal, perhaps as a sign of the times, was clearly aiming to be more experimental and international.  The experimental was clear in the chicken skin crackers, egg salad on toast, and popsicle in the dessert.  The international flavors were clearly there: samosa -> Indian, katsu -> Japanese, cang ying tou -> Chinese, tamal -> Mexican.  I think it leads to a meal that had a few non-hits along the way (I wouldn't call them misses), but overall makes the meal more interesting along the way.  With those changes, I can see myself coming back to see what they come up with in a few years.
Posted by Albert Chu at 6:51 AM No comments: