Duck Tales on the NES

Recently I learned that the classic NES game Duck Tales was getting an HD remake for modern systems.  Here's the trailer:


It's considered one of the best games on the NES, placing at #10 on IGN's top 100 NES games of all time.  The game had incredible non-linear level design, secrets to discover all over the place, and (what many consider) some of the best music on the NES.

I was so fond of this game, I reached the point that I knew all of it's secrets.  I knew the game well enough I even got my high score printed in Nintendo Power!  (This is sometime in 1990, when I was 10-11). 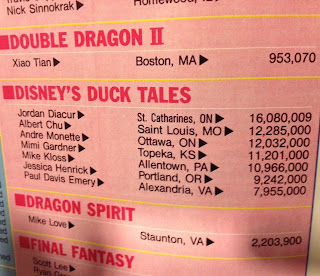 However, it's funny looking back on the game as an adult.

The plot of the game is that you control Uncle Scrooge as he wanders the world looking for treasure to help him keep his hold as the world's richest Duck.

I think in today's post-financial crisis and post-occupy movements, having the protagonist of a children's game look like a greedy CEO is something that most video game/cartoon creators would likely pass over in today's social climate.

I can't help but laugh thinking of a really modern review of the game, "Help Uncle Scrooge wander the world attacking indigenous people to steal their cultural treasures."