I recently read the famous paper "The Anatomy of a Large-Scale Hypertextual Web Search Engine".  It's a paper written by the Google co-founders Larry Page and Sergey Brin circa 1997/1998 about their web search engine research while they were students at Stanford.  The very first sentence of the paper summarizes its contents quite well, "In this paper, we present Google, a prototype of a large-scale search engine ...".

The paper is very interesting looking back on it 17-18 years after it was published.  I thought I'd comment on some of the fun things I read.

November 1997, only one of the top four commercial search engines finds itself (returns its own search page in response to its name in the top ten results)

If the above is true, it is truly comical by today's standards of web search quality.

Throughout this section, Brin & Page continually do "bit stuffing" to save storage space.  Typically only done by those dealing with firmware, I find it a little ironic that they had to go to such lengths.  Given the amount of data they had to deal and the amount of hardware resources they had, it was obviously justified.  But it's sort of funny to think about it given today's data sizes and hardware resources that Google, Facebook, Yahoo, Bing, etc. have.

Servers to Crawl the Web

The original Google used a single URL server to serve lists to 3 web crawlers.  Insanely tiny by today's standards.  Of course, it was a much tinier web in the 1990s.

Perhaps the best part of the paper, Brin & Page talk of the social consequences of their crawler.  Most notably, some website owners were confused at what a web crawler was and why they were looking at their page.  Some would e-mail them asking questions ... some even called them.

Apparently the original Google had a compressed repository of just 53GB of data.  Insanely puny by today's standards.

In addition, it took only 9 days to download all of the data on the web at the time.  It's not clear how many machines were at their disposal, but it did not appear to be more than maybe a dozen (as said above, they only used 3 for web crawling, and they note they used 4 for sorting the index).

In this appendix section Brin & Page talk about the conflict of interest that search engines have when advertising is involved.  They specifically site the search of "cellular phone" as a keyword and say

It is clear that a search engine which was taking money for showing cellular phone ads would have difficulty justifying the page that our system returned to its paying advertisers. For this type of reason and historical experience with other media [Bagdikian 83], we expect that advertising funded search engines will be inherently biased towards the advertisers and away from the needs of the consumers.

It's ironic of course, b/c this is nearly the exact opposite of modern day Google.  A search for "cellular phone" on the site returned for me (in order)

This doesn't count all of the ads that are on the right hand column.
Posted by Albert Chu at 3:49 PM No comments:

La Folie offers either a tasting menu that's 5 courses (plus the amuse, petites, palette cleansers, etc.) or a "pick-n-choose" price fixe menu.  You can pick anywhere from 3 to 5 courses out of a list of about 20.  It includes appetizers, entrees, and desserts.  The only rule is you can't pick more than one entree item.

We elected to go with the pick-n-choose and we both decided to stay conservative and order just 3 courses, an appetizer, entree, and dessert.  That was a wise choice.  We would have been stuffed with more.  If you go with more than 3 courses, I'd recommended choosing dishes that are a bit more light and small (such as soup).  We did however, add a small course of a half of an ounce of caviar, just for fun.  So it was pushing 4 courses anyways.

So first we got some amuse dishes. 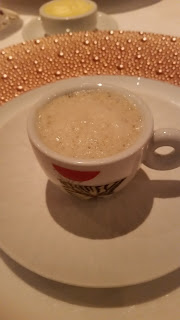 The waitress said this was one of the chef's specialties, a foie gras cappucino, although I think it I would liken it more as a foie gras soup.  The waitress even called it a foie gras soup to the table next to us.  I thought it was really tasty.  Admittedly, I haven't had enough foie gras in my life to discern the foie gras flavor, but it was a very tasty broth. 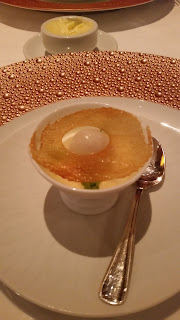 Next was another amuse dish, a small poached quail egg in a corn soup.  I thought it was an interesting dish overall. 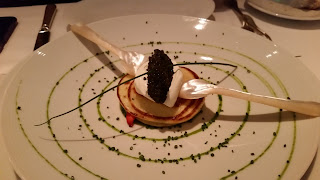 Next came our caviar tasting.  I was actually a bit surprised how much caviar there was, as I thought a half ounce was gonna be a lot smaller.  The picture perhaps doesn't do it justice.  I didn't know what lobster potato blinis was, but it apparently was just some lobster between two small potato-like pancakes.  It was an actual nice chunk of lobster claw, not just little lobster pieces which I thought it would be, so that was nice.  I thought the caviar was delicious. I probably would have enjoyed it more just by itself, although everything else was nice as well. 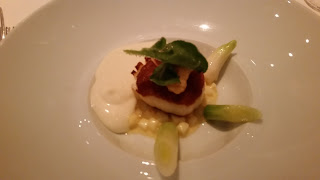 My date and I couldn't figure out what to have as an appetizer and we both really wanted the scallop, so we got the same one.  It was delicious.  The picture doesn't do this scallop justice as it was quite large and sizable.  Not the normal "entree" like scallops you normally see.  I had this feeling that corn was in season, as there were numerous corn dishes on the menu. 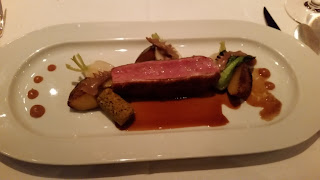 I got the duck breast as my entree.  It was cooked rarer than I think I've ever had duck before.  It was quite soft and far better than the duck I recall having a Cotogna.  There was a small bit of foie gras that was added (it's the small roll at the bottom of the photo) that was infused with some citrus flavors.  It and the grilled plums were particularly delicious.  I wasn't particularly enthused with the cockscomb, which had a bit of a muschroomy like texture to them (which I hate mushrooms).  I didn't even know what the ingredient was and had to ask the waiter at some point.

As an aside, I almost ordered the lamb as my entree.  I'm glad I didn't when we saw another couple order it at another table.  The rack was probably twice the size of the duck breast. 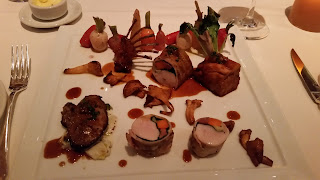 It was a lot more food than my duck breast.  The waiter actually told my date, "It's a lot of food, you don't have to try and finish it all".  I actually had to help her eat a nice chunk of this plate and we still couldn't finish. 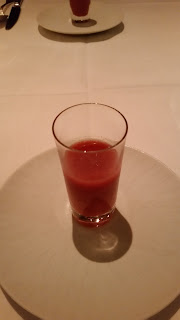 Then we got a light refreshing summer berry soda as a palette cleanser. 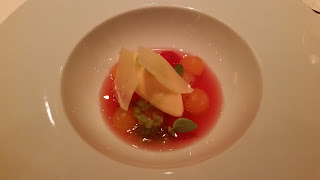 For my dessert, I specifically wanted something light.  Normally this dish comes with pineapple, but since I'm mildly allergic I asked them to remove it.  Overall, a nice refreshing sorbet with fruit.  It was a nice end to dinner. 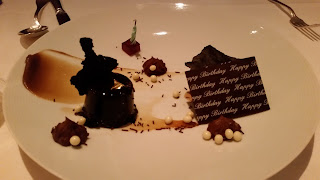 My date went and got something a bit heavier for dessert.  From what I tasted, also quite tasty.  The cocoa paper was particularly nice. 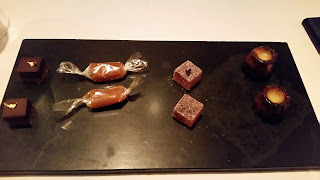 And finally we got some petit fours.  The strawberry gelatin was particularly good.

The meal took about 2 hours total, which was perhaps a tad fast by most fancy restaurant standards.  It's perhaps part of the reason we were a tad stuffed after our entree course.   The heavier meat entree dishes definitely stuffed us.  The portions for every course at La Folie (with the exception of the dessert) were quite sizable, which was a surprise.  So for those looking to head over there, be careful of ordering more than 3 courses.