While in Japan, my girlfriend wanted to go to a real nice hotspring.  A friend recommended Arashiyama Benkei and the booking also included a 12 course kaiseki meal ("half-board" if you're booking online, it's sort of confusing what it means).  Surprisingly, there was very little on the internet about the meal.  Not sure if foodie's just aren't interested in going here, or perhaps as a ryokan/hotel it's just not the primary focus and few get the meal.  Anyways, for all interested diners out there, here's an overview of the meal we had.  I'm not going to talk about the hotspring or ryokan/hotel as there are plenty of resources on the internet to talk about that.

The staff is quite English friendly and they provided an English menu, so it was much easier to decipher what I was eating compared to the two prior kaiseki meals I had in Japan.  Also, if you book the meal, as part of the experience they serve the meal to you in your room.  They bring out the dishes quite quickly, it's not the super slow pace that you may be accustomed to in finer dining establishments.  It sort of makes sense, since you're in your room.  I think we ended our meal in about 90 minutes.  It's also possible its timing of when we asked for dinner.  They ask the guests when they want to begin their meal.  Perhaps we told them a time that was super slow or something, or perhaps most of the guests didn't get the meal.  It's not a big deal either way.

So here's an overview of the meal we had.  I should mention that some items were brought out simultaneously (such as the soup & rice at the end, which is what happened at the other meals).  But since they were split out in the menu I'll list each separately. 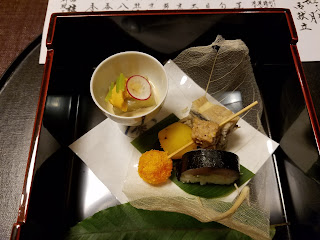 You can see the orange-ish egg yolk on the end of the skewer in the middle.  That was delicious.  The mackerel sushi was really delicious too.  It must have been cured or something because mackerel usually doesn't have that strong of flavor.

It's worth showing how the dish was originally presented. 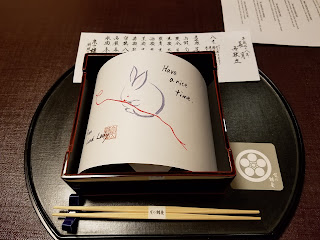 My girlfriend and I both had a different picture, which was sort of cool. 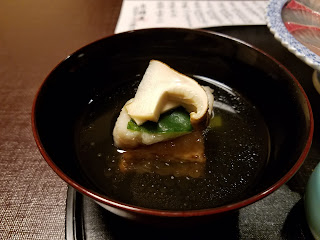 The tilefish was really good and the broth was light and delicious.  I think at the bottom of this dish was fishcake even though it wasn't listed. 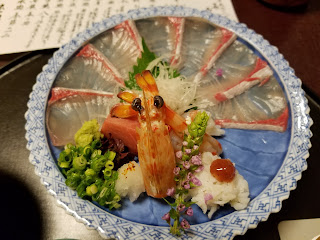 This dish looks ridiculous. There's yellowtail on the top that was served with some ponzu sauce. The amaebi shrimp, maguro, and hamo were on the bottom and served with some soy sauce. There was also some (I think) plum sauce on the hamo. I think it's interesting that we had maguro and hamo at Hirobun the other day. I guess when it's in season, you're likely to get this stuff at many restaurants. The hamo was a little softer than the one I had at Hirobun. Overall, all pretty delicious. I liked the amaebi I got at tsukiji more, but I'm nitpicking a bit at this point. 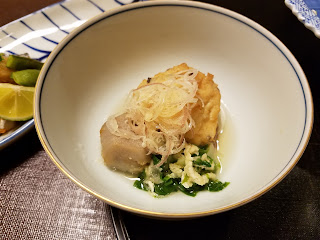 The English menu said "adductor muscle", which I assume is a translation error.  Possibly some type of "mussel"?  If it was ground into the tofu I don't recall tasting it.  Perhaps I'll never know what was meant. "Brassica pekinensis" brought up a Chinese cabbage on Google.  Overall a nice course. 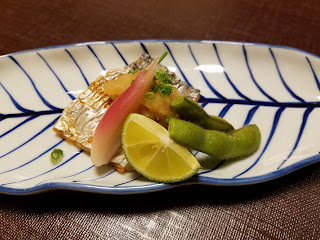 This dish also included a few edamame, which I thought was an interesting addition on the side.  I wasn't familiar with frost fish, but I enjoyed this dish and especially liked the radish/ponzu combination on top.  I'm also glad we didn't get grilled ayu again like the other two kaisekis :-) 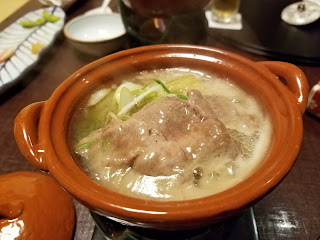 The dish originally came out with the beef raw.  The server told us to eat the dish after the pot started steaming with the flame below.  Hot pot isn't my favorite because I think the dish is a little light on flavor, but the chili pepper (which was on the side and you stirred in as you wish) kicked the dish up a couple of notches.  Overall, pretty good, although I preferred some sukiyaki we had earlier in the trip. 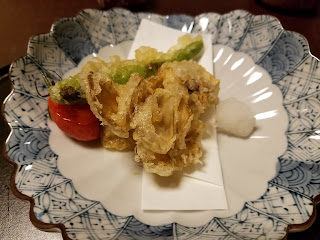 This was the third time in our trip that we encountered this sweet green chili and it's delicious.  I guess it was in season in Japan.   We both loved the cherry tomato, it was super sweet.  I honestly can't remember much about this fish.  It's possible I was "fished" out by this point in the meal. 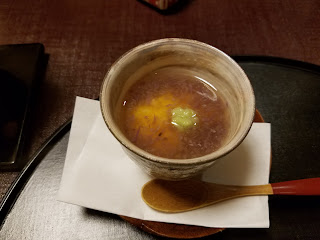 There was also some rice in this soup.  Overall, not my favorite combination of flavors. 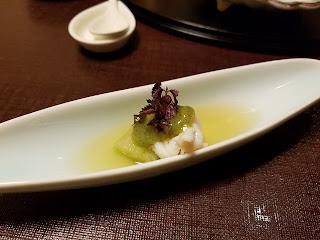 I'm a bit allergic to tropical fruits and had them remove the green kiwi sauce you see on top.  I decided to try a dab of it off of my girlfriend's plate and it was sweet and delicious.  I'm sure it would have been delicious with the shrimp.  I thought the green "stem of taro" was really interesting.  It's the green thing you see at the bottom which I had initially assumed was green onion. 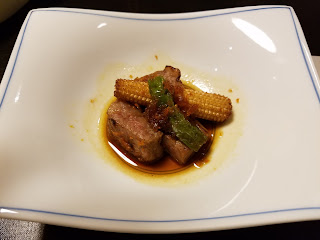 The staff brought us this additional dish on the house. It was beef with green bean and baby corn. There's some red flakes and sauce that I tasted familiar, but couldn't determine the flavor. We had some A5 wagyu steak for lunch and could immediately tell this was wagyu, but it probably wasn't A5. I'm not complaining this it was on the house extra. 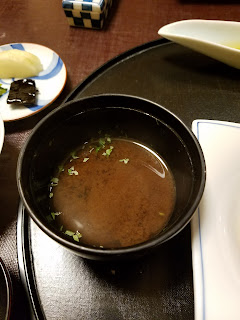 At an earlier meal I had wondered why the miso soup tasted different than the typical ones in the states, and perhaps it's the fact it was red miso.  Overall tasty. 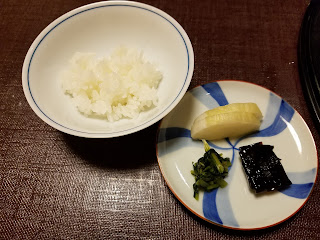 The server brought a bucket of rice and served this to us for this course.   After serving the rice the server asked if we needed more rice.  We immediately said No! :-)

The pickles included pickled daikon, some vegetable that we couldn't identify, and a seaweed/konbu.  I especially liked the seaweed as it was much sweeter than the Chinese seaweed I've typically consumed. 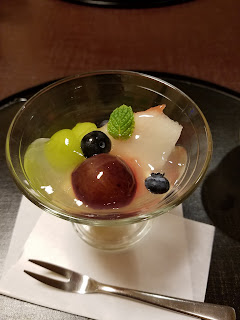 This is what I love about the dessert courses at more Asian themed tasting menus (see Benu and Narisawa as examples). It's really light compared to the somewhat heavier desserts at more western restaurants (see Blackbird and its goey butter cake as an extreme example). This is some type of sweetened gelatin/sauce with fruit. Not the most complex dish in the world, but light and wonderful after getting stuffed with food. Minimally there was green grapes (real sweet), red grape that I assume was a kyoho (also really sweet, not like American red grapes), blueberries, asian pear, watermelon, white peach, orange, and banana in this dish.

Overall, a nice kaiseki meal. I debate in my head if I enjoyed the one at Hirobun more (somewhat adjusting for the smaller number of courses and smaller portions because that was for lunch). They both had some courses I enjoyed more than other one.
Posted by Albert Chu at 7:49 PM