While wandering the streets of Kyoto, my girlfriend and I needed to get dinner.  The Gion region of Kyoto has tons of restaurants offering kaiseki meals.  I believe we saw kaiseki meals ranging from 3500 yen (approximately $35 US dollars) to 20,000 yen (approximately $200 US).  Some of the restaurants require reservations, so we just wandered down an alley and happened upon Nagamegawa Pontcho Hana that had space.  Atleast, I believe that's the name of this restaurant based on Googling afterwards.  They offered a 7000 or 10000 yen kaiseki meal and you can sit outside and look out on the river.  This was our view: 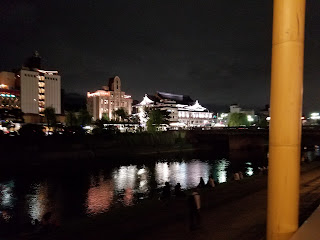 So we decided to grab the 7000 kaiseki menu, because we had no idea what to expect otherwise.  The restaurant's menu was in Japanese only and the staff predominantly spoke only Japanese.  So we didn't really know how many courses there were, what we were going to be served, and quite honestly, we didn't even know what we were served afterwards in some cases :-)  So we decided to be prudent and get the cheaper option.

I am by far not an expert in identifying ingredients so much of the below is guessed. 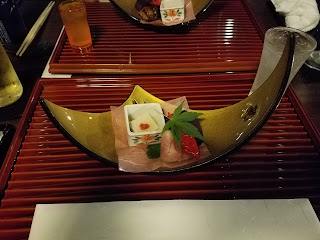 There's some tofu, red pepper, beef, and I believe eel as a starter.  Overall a nice light start to the meal. 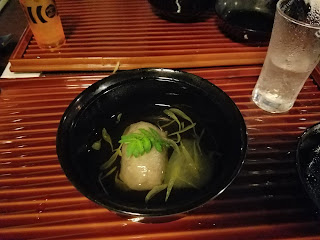 This soup was a tasty broth. I have absolutely no idea what the item in this soup was.  It was a starchy paste kind of thing.  It definitely wasn't potato or taro.  I suppose it could have been yam or something of that nature, or possibly a Japanese potato I'm unfamiliar with.  It was interesting. 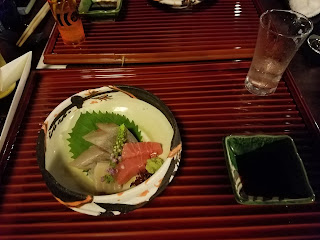 This was the sashimi course.  With the exception of the bright red trout (atleast I think it was trout and not salmon, and it was delicious) I have no idea what the other two sashimis were.  I have mini confidence that the one on the bottom was in the snapper family, but the one towards the top I have pretty much no idea.  I have reasonable confidence the wasabi was real wasabi, as it wasn't as strong as the normal horseradish. 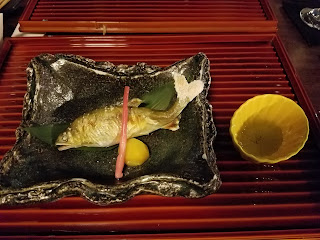 I assumed this was ayu, and it came with some ginger and chestnut.  You're supposed to eat this fish, bones and all, but it was outside of my capability to, so I just picked off the meat the best I could.  The sauce to the right I assume was a citrus & vinegar mix.

The one interesting thing about this dish is that the tail fin was overly salted.  You can tell in the picture by how bright white the tail is.  I believe this is by intention, although I don't know why.  It's quite salty when I downed it. 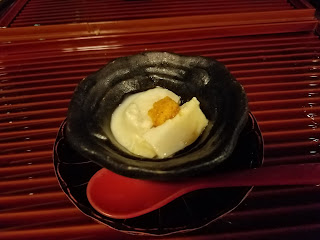 The waitress told us this is yuba and we were able to determine the uni in the middle pretty easily.  This was refreshing and good palate cleanser after the grilled ayu.  I particularly liked the uni.  Uni in Japan seems to be better than the uni in the states, I'm not sure why. 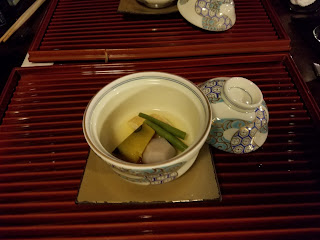 This was a good light dish of veggies in a tasty broth.  There was pumpkin, green beans, tofu, and what I assume was taro. 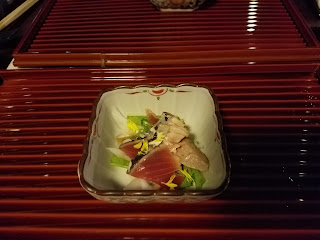 This was a cold course. I have no idea what the fish was.  It definitely wasn't tuna.  This dish had some lettuce and onions.  Overall I found it light and refreshing. 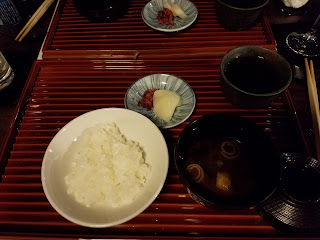 Nothing too much to say about this course.  This is predominantly the filler course before the end with some miso soup, rice, and pickled items (daikon and something else).  I did like the miso soup.  It wasn't the same miso flavor that one typically sees at Japanese restaurants in the states, it was a little richer.  Perhaps it's the soup base or something. 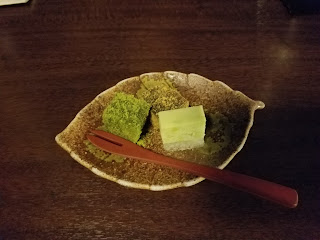 The green mochi on the left and sesame mochi on the top was immediately identifiable.  But we weren't really sure what the dessert on the lower right was, as it was not mochi.  More like a gelatin.  But it was really tasty.

Overall, a pretty good kaiseki meal.  I wouldn't consider the meal to be as good as Kusakabe in the states.  The inability to determine the ingredients put a damper on the meal, so for anyone wandering the Gion region of Kyoto, be aware.  In addition, I believe that the restaurant does charge a bit of a premium for their view and their location in the very popular Gion region.  I have little ability to judge value of kaiseki meals in this area to know if it's good or bad or a decent or bad price.  Perhaps I'll be able to judge better as the trip continues.
Posted by Albert Chu at 5:17 AM