My girlfriend wanted to check out Hirobun in Kyoto because they are somewhat famous for their somen noodles that you "fish" out of water (here's a random link I found about it).  They (along with many restaurants in Kibune) are somewhat famous for the fact that you can eat on a river.  A platform is laid out on top of the river, and you can actually eat on it as the river flows under you.  Needless to say, there are beautiful mini-waterfalls and foliage all around.  Here's the view we had from our table. 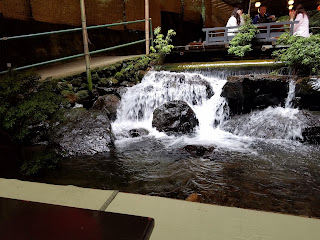 That may look like an artificial waterfall in a restaurant, but it's not.  It's actual flowing water from a river.

Our initial plan was to hike to Kibune, eat a kaiseki lunch at Hirobun, then afterwards try their noodles.

We didn't have any regrets as the kaiseki meal was wonderful.  Here's an overview of the lunch we had.  Just like my prior post I had to guess on a number of ingredients.   Some of the staff at Hirobun spoke a little English, so we were able to decipher the ingredients of the dishes better than before, but not all of them. 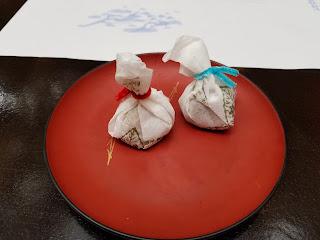 These cute pouches had a rice cake w/ red bean paste in the middle.  Tasty. 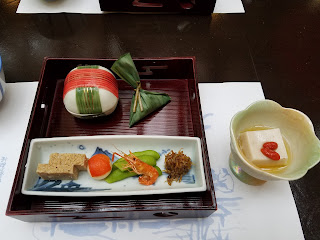 This second course had a lot of stuff.  We weren't aware of all of it, but here goes.  Upper left was a small piece of tofu with what I believe was nato on it.  It was really tasty with the contrasting flavors.  To the right in the bamboo leaf (or possibly banana leaf) was some type of starch, possibly rice cake with a citrus-like filling.  It was delicious.

Bottom row, the left was some type of cake with a meat like flavoring to it.  Also really good.  Then a starch-ish ball with what I believe was cured salmon.  Then some edamame, shrimp, and pile of what I assume was cooked shirauo (very tiny fish).  I liked the shirauo flavor.  While salty, it wasn't just "salty stuff to put on rice" like I've had before.  Then finally to the far right was tofu with what I assume was goji berry.

This course was really good.  Tons of items that were really tasty or interesting. 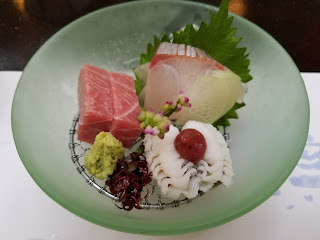 This sashimi course had maguro, kampachi, and hamo with what I believe was a bit of plum sauce.   The maguro was especially delicious.  The hamo and plum sauce was tasty, but hard to compare since it's the first time I had eel sashimi.  There was a bit of crunchiness to it, which reminded me a bit of tripe. 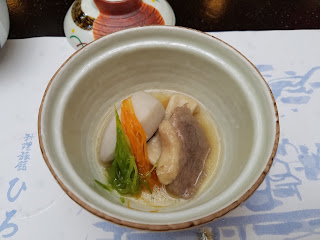 This was a warm dish with potato, duck, and what I believe was some bean curd with carrots & some other veggie as garnish.  Overall tasty and with a nice broth. 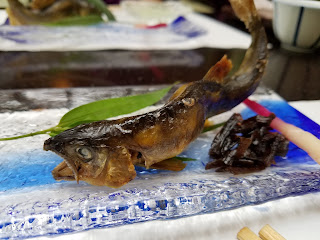 This is my second grilled fish in a kaiseki on my trip.  Reading online, it appears grilled whole fish is a staple of kaiseki.  The waitress confirmed this fish to be ayu (which looks than the one yesterday, so maybe it wasn't ayu).  This was tastier than the one from last night and came with some vinegar which I didn't include in the picture.  I had trouble eating the bones and didn't eat the main "spine".  The fins were salted, which was interesting.  The presentation of this ayu was just awesome though, looking like it was still swimming.  If you zoom in you can still see the teeth of the fish. 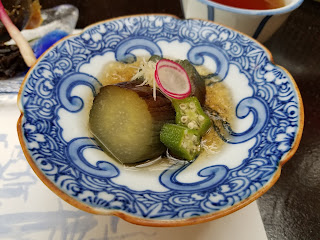 Served cold, there was eggplant and okra in a gelatin-ish broth.  The broth had a bit of fish flavoring.  Overall, I really enjoyed this course.  The eggplant and okra were delicious.  I wish I had a spoon to scoop it all up together but had to instead slurp up the soup/gelatin afterwards. 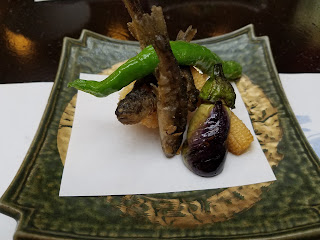 This was a small collection of items.  Small fried fish (I assume smelt), a pepper (unsure of the variety, but very tasty), a mini-eggplant (tasty), some baby corn, and beneath it some fried pike eel, which appears to be in season as it's the 4th or so time I've come upon it on my trip. 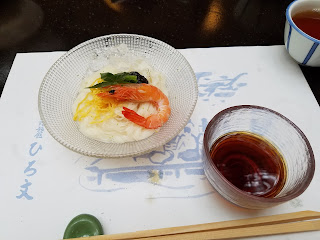 I assume this is the somen noodles this restaurant is famous for with their "noodle fishing".  Obviously you can tell its served with some eggs, shrimp, and some dipping sauce.  Overall, very tasty.  The flavor was a little lighter than the somen noodles I've familiar with from home, but that may be me just being used to the random store bought somen. 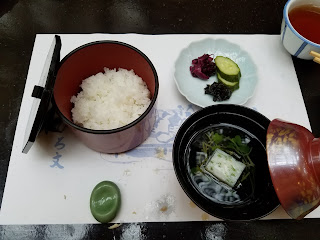 Another filler course before dessert.  There are cucumber pickles, pickled red cabbage, and something else which I'm not sure.  The soup was a clear broth with some water shield and what I believe was a fish cake.  The broth was delicious and I'm becoming a big fan of water shield after having it for the second time this trip (previously at Narisawa). 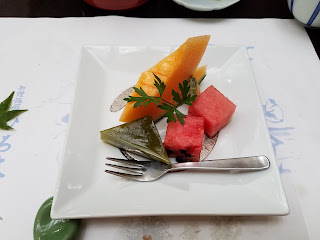 Finally the dessert course with some cantaloupe, watermelon, and some matcha jello.  Both my girlfriend and I loved the watermelon, I guess it's in season in Japan right now.  The cantaloupe not quite as sweet as what I'm used to in the states.  The jello was good too.

Overall, this meal was excellent and I enjoyed it more than meal at Nagamegawa Pontcho Hana.  I think the dishes were tastier, had more variety, and the presentation was better (especially the ayu).  On top of all that the meal was only 8600 yen, so only about $16 more in US dollars.  And they even gave us this cool fan as a souvenir. 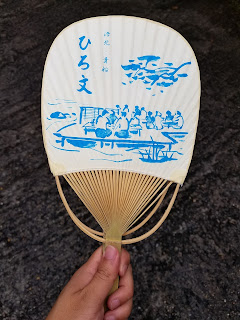