I ended up in Chicago for an unexpected trip and decided I needed to hit up the Chicago foodie scene while I was in town.  The trip was last minute so I knew that reservations would be hard, but I was able to snag dinner at Blackbird on relatively short notice.  In the last Michelin guide release in Chicago, it was given a Michelin star.  They have an a la carte menu, but I decided to go for the tasting menu.

The tasting menu is made up predominantly of smaller portions of appetizers and entrees from their a la carte menu, however the amuse bouche and an intermezzo towards the end appeared to be unique to the tasting menu.  So if you're looking for something far different than the menu, the tasting menu shouldn't be something you should try.

As an interesting aside, when we got to the restaurant, the hostess gave several of us a black napkin to replace the white napkin on the table.  Others got to keep their white napkin.  We curiously asked the waiter why they did this.  Apparently it's done dependent on the pants the individual is wearing.  They don't want white linen/lint to fall on someone's dark pants and similarly dark linen/lint to fall onto someone's light color pants.  I thought it was interesting.

Anyways, here's a review of the tasting. 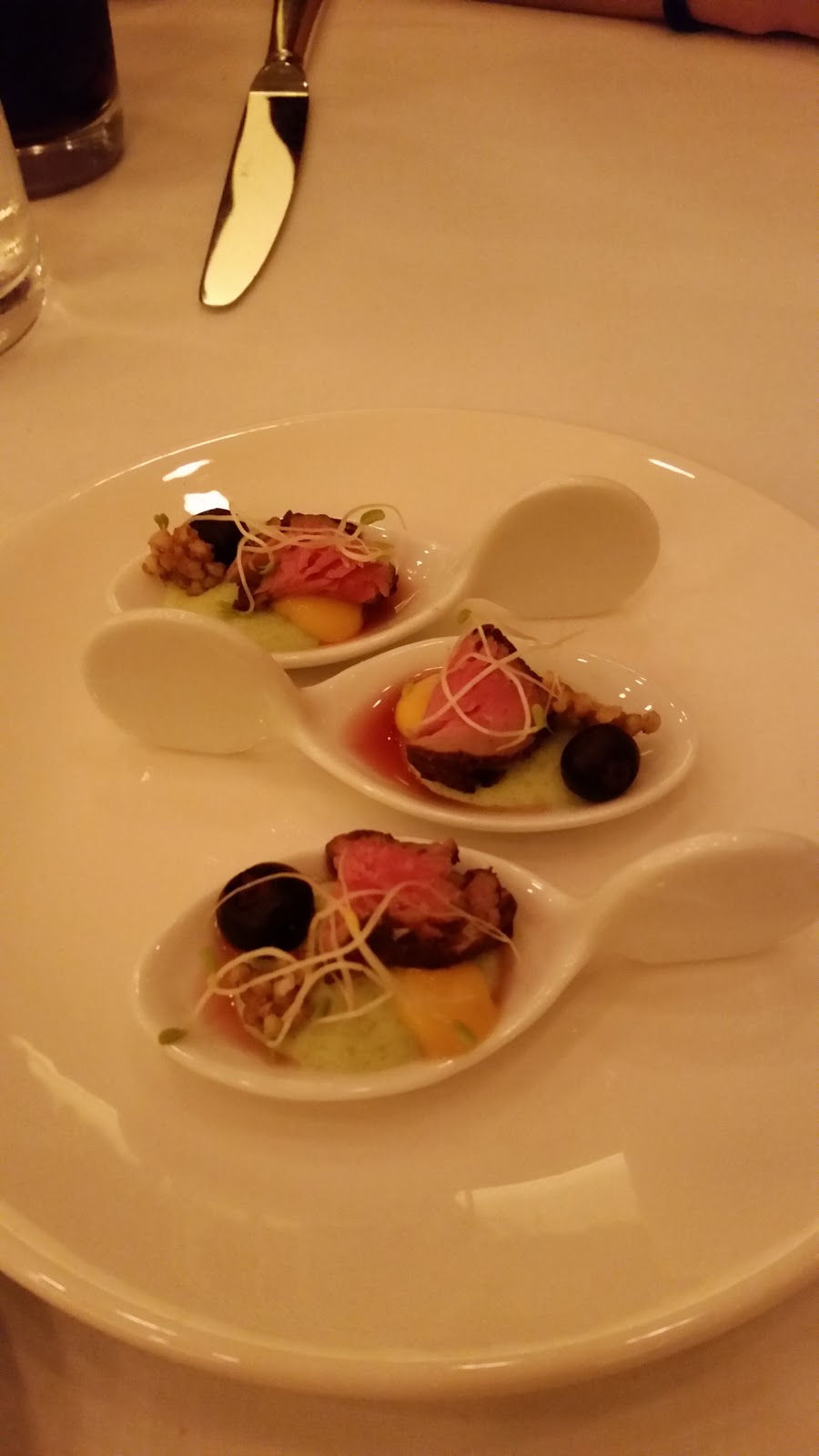 This might have been my favorite tasting of the night.  It was a mixture of so many flavors and textures (especially the puffed buckwheat) and the lamb was delicious. 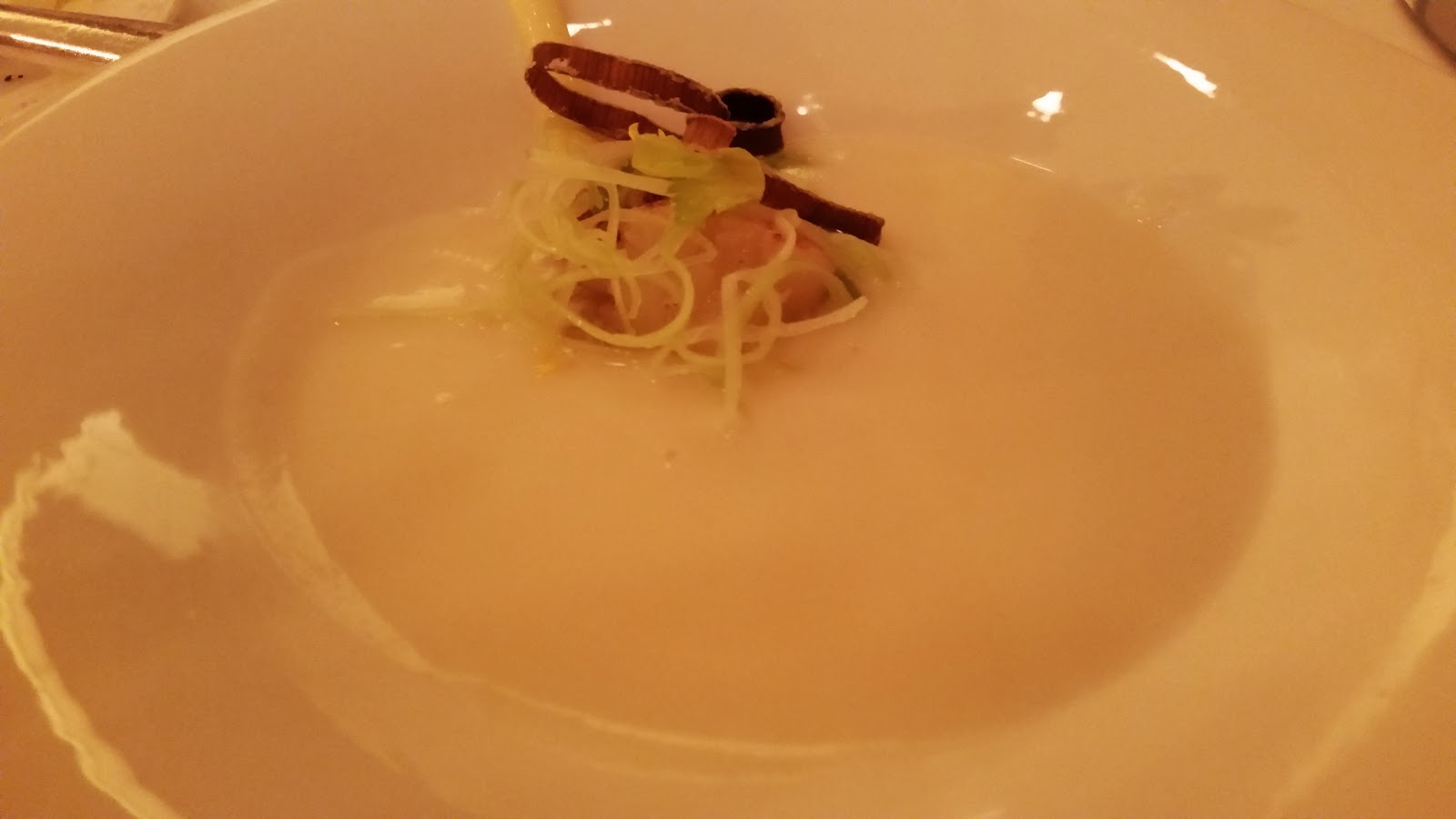 I really enjoyed this celery root soup.  My only knock is (what I believe to be) the celery shavings put on top of the lobster. 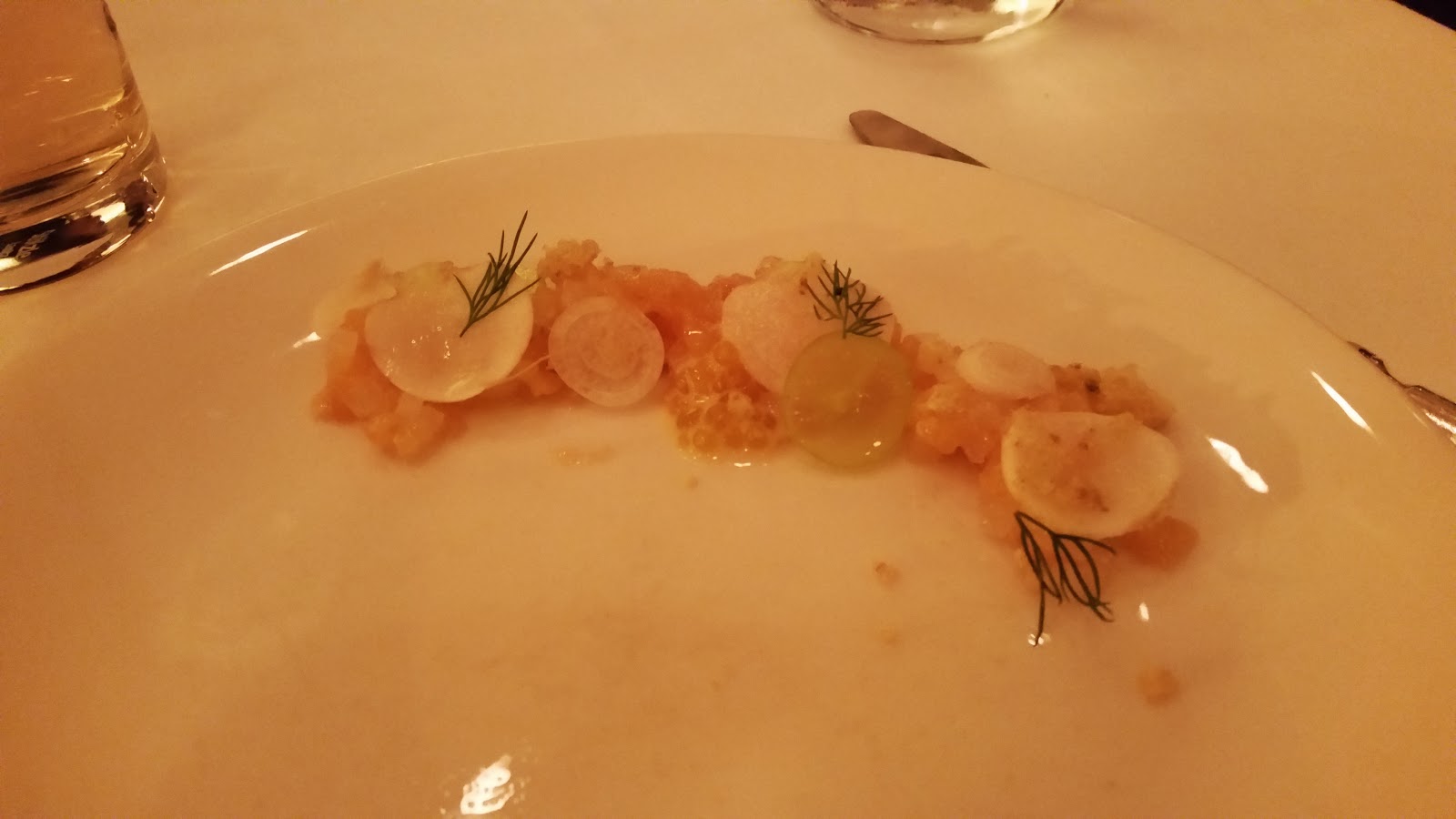 This was an interesting dish, one that all of us were not expecting.  The pearl onions were diced and mixed in with the diced ivory char.  The overall taste was sweet.  Overall, quite nice.  I like it when a restaurant can surprise me with something I've never really had before. 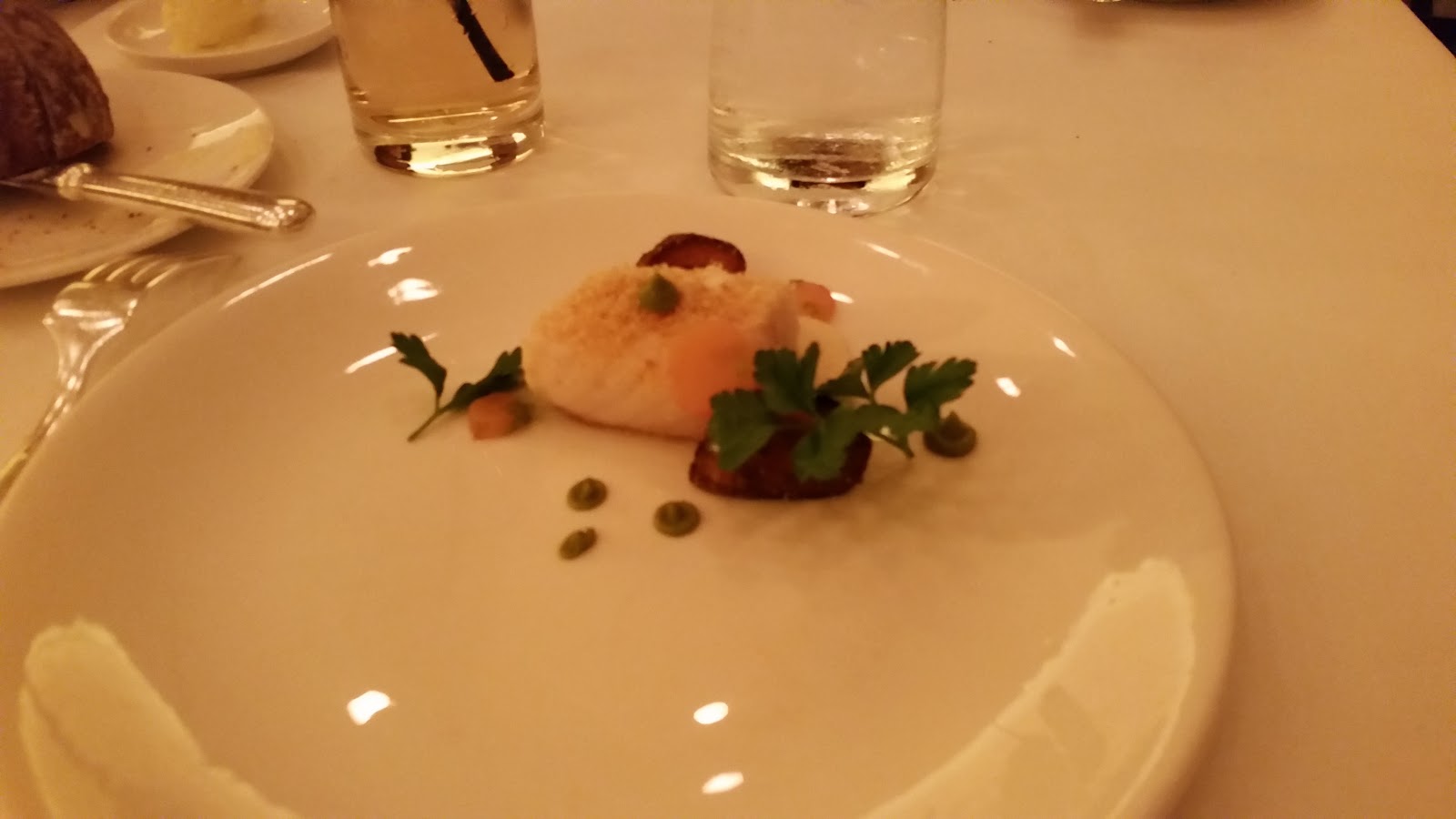 This was probably my second favorite dish of the night.  The fish was perfectly cooked and all the sauces matched very well with the fish. 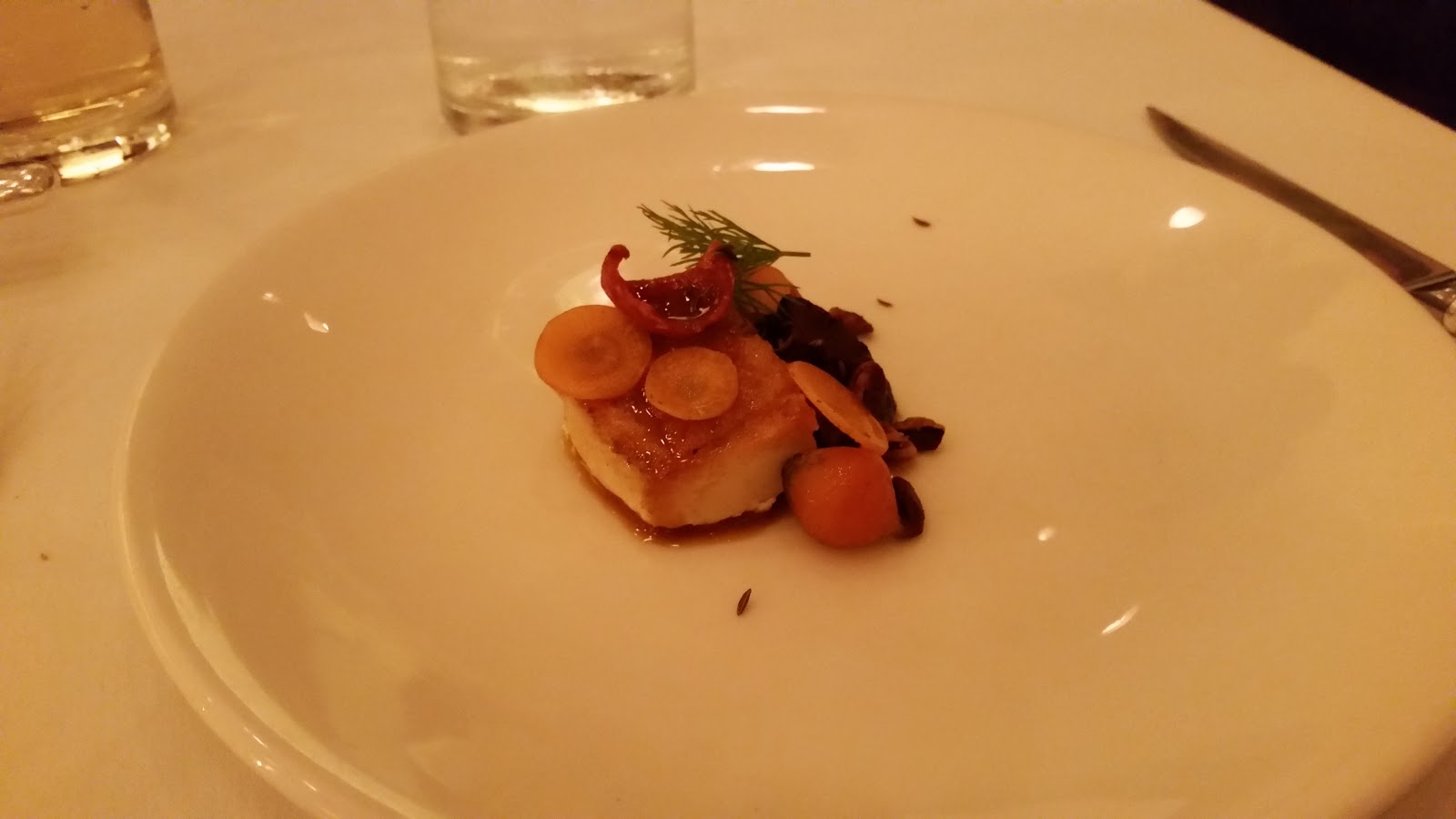 Overall a solid dish.  The chicken was good, but the highlight of the dish was the carrots, with three different kinds of carrots in the dish (atleast 3, guess there could have been more).  On the upper right of the picture you can see a black-ish ingredient on the dish.  I couldn't figure out what it was at first, thinking it was maybe a mushroom.  But the texture wasn't there and the flavor was certainly not mushroom.  It ends up it was an heirloom carrot, something I'd never had before.  The carrot flavor wasn't as strong as normal carrots, really interesting. 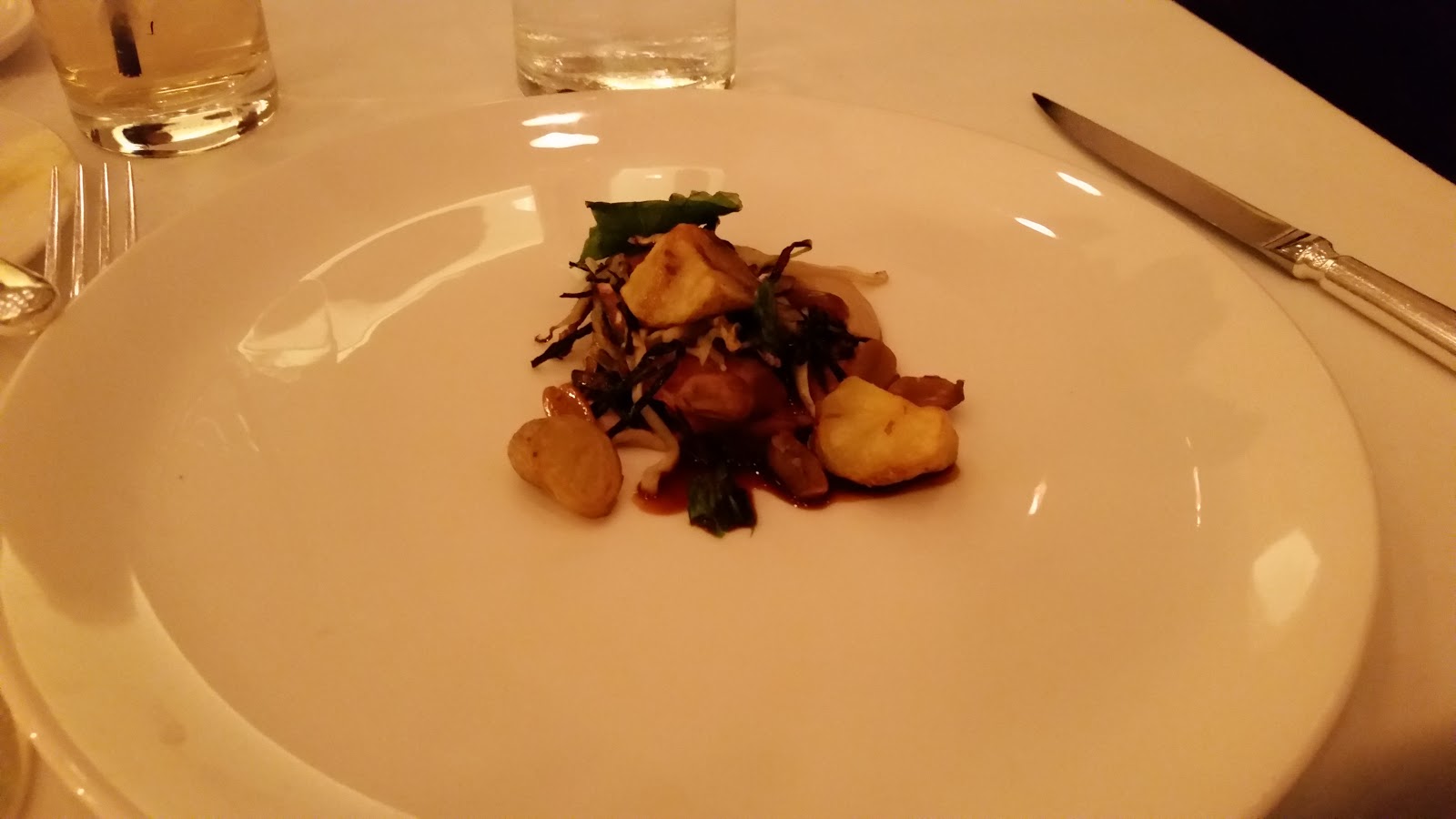 This was a real big miss of the evening in my book.  The striploin and charred cabbage were really good by itself, but I'm not a big fan of peanuts.  I really feel the peanut flavored sauce in this dish drowned out everything else.  But that may be due to just my personal taste of peanuts.  If I knew better, I would have eaten the steak and charred cabbage by itself (as well as the potatoes) and pushed the peanuts and peanut sauce to the side. 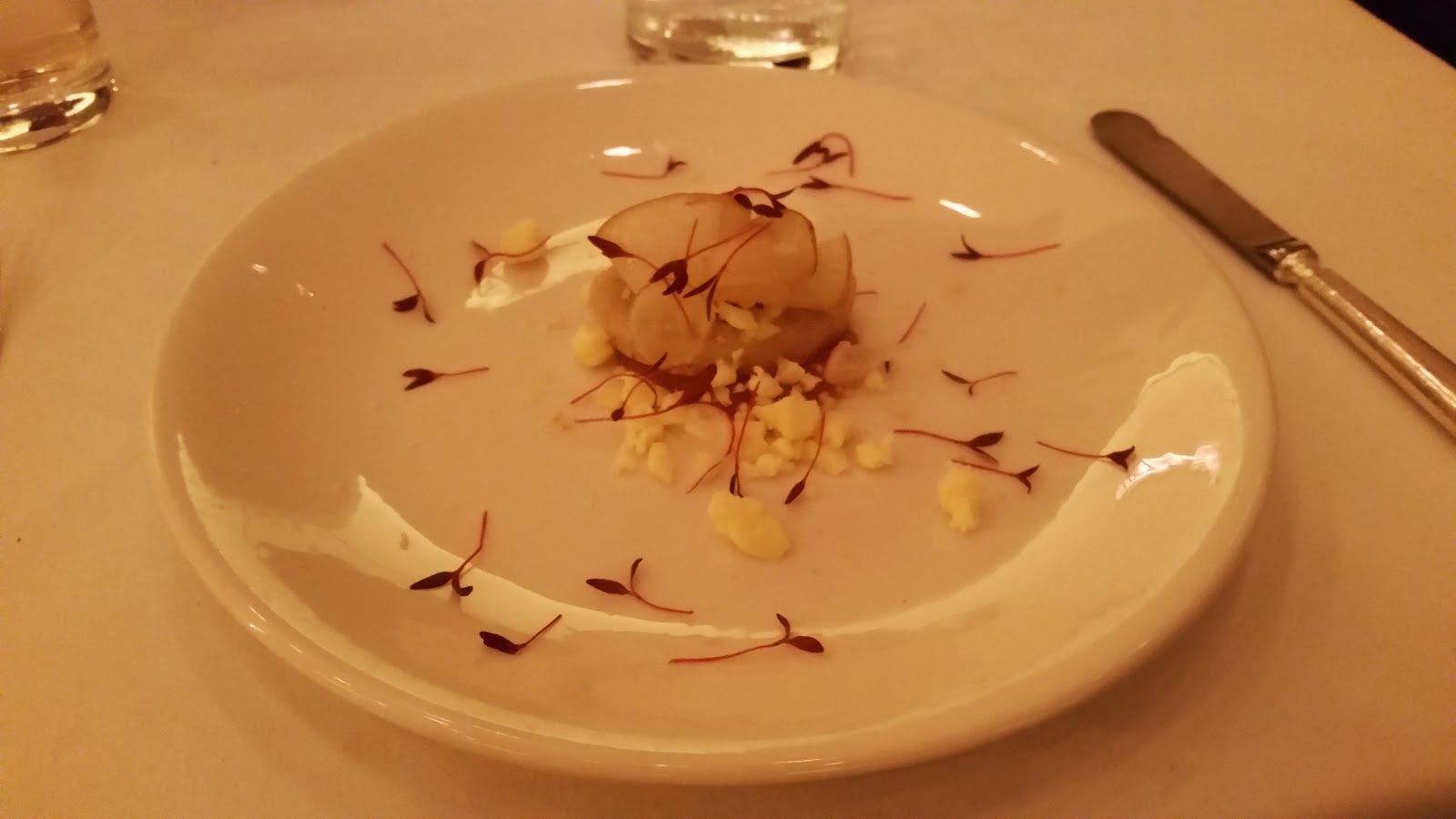 This was the cheese course of the evening.  I've never had a cheese course served sort of "on the side" of the dish while everything else (sourdough crumpet, horseradish butter, and quince) were plated in the center.  I really enjoyed all of the flavors mixed together.  Very tasty.

8) amaro and fennel sorbet with pomegranate and thyme tapioca 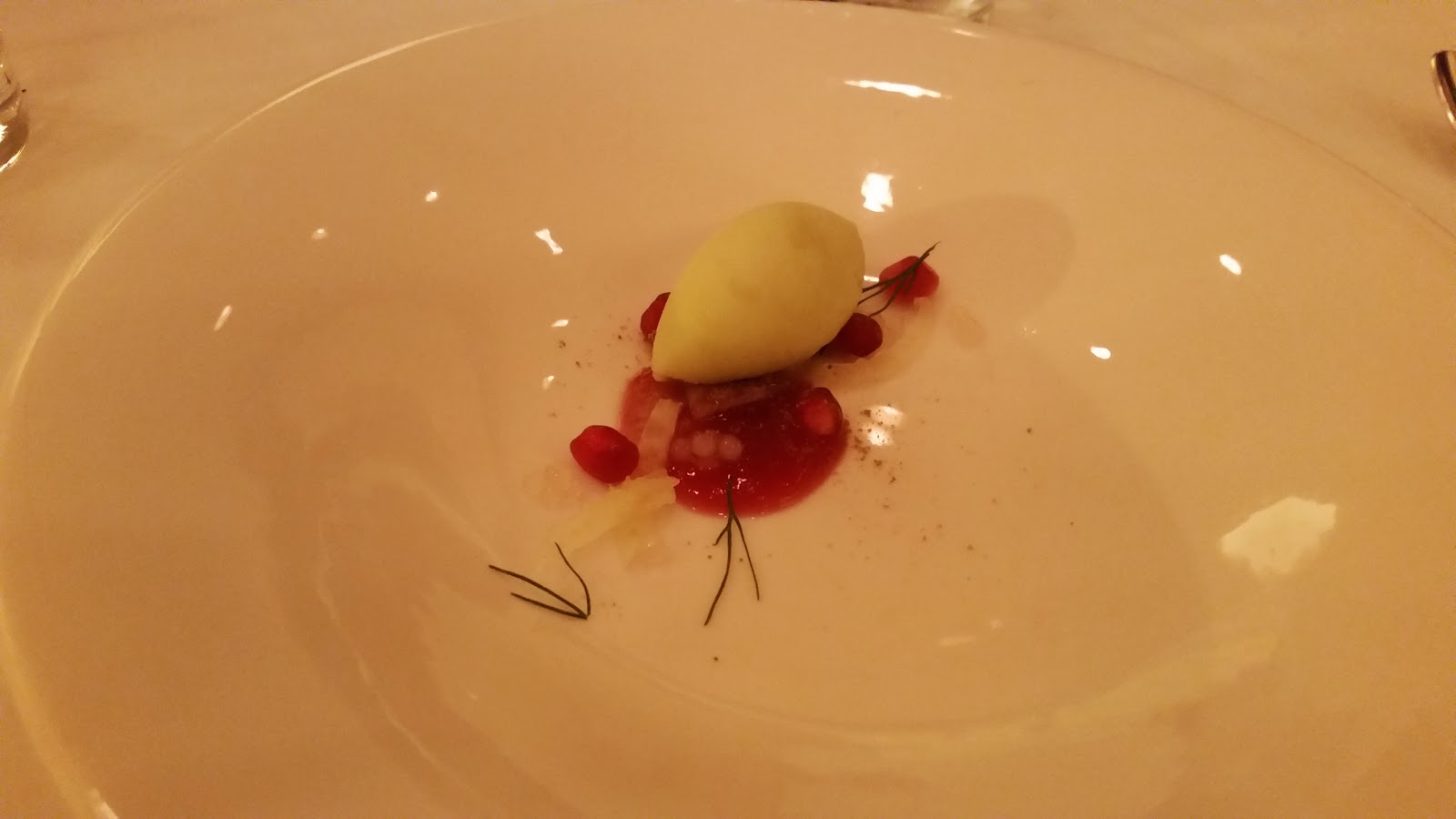 If you've read any of my blog entrees before, you'll know I love sorbet.  This was an excellent tasting.  Fennel is not a flavor I would have expected to like, but it was good by itself.  Add in the pomegranate and this was very tasty. 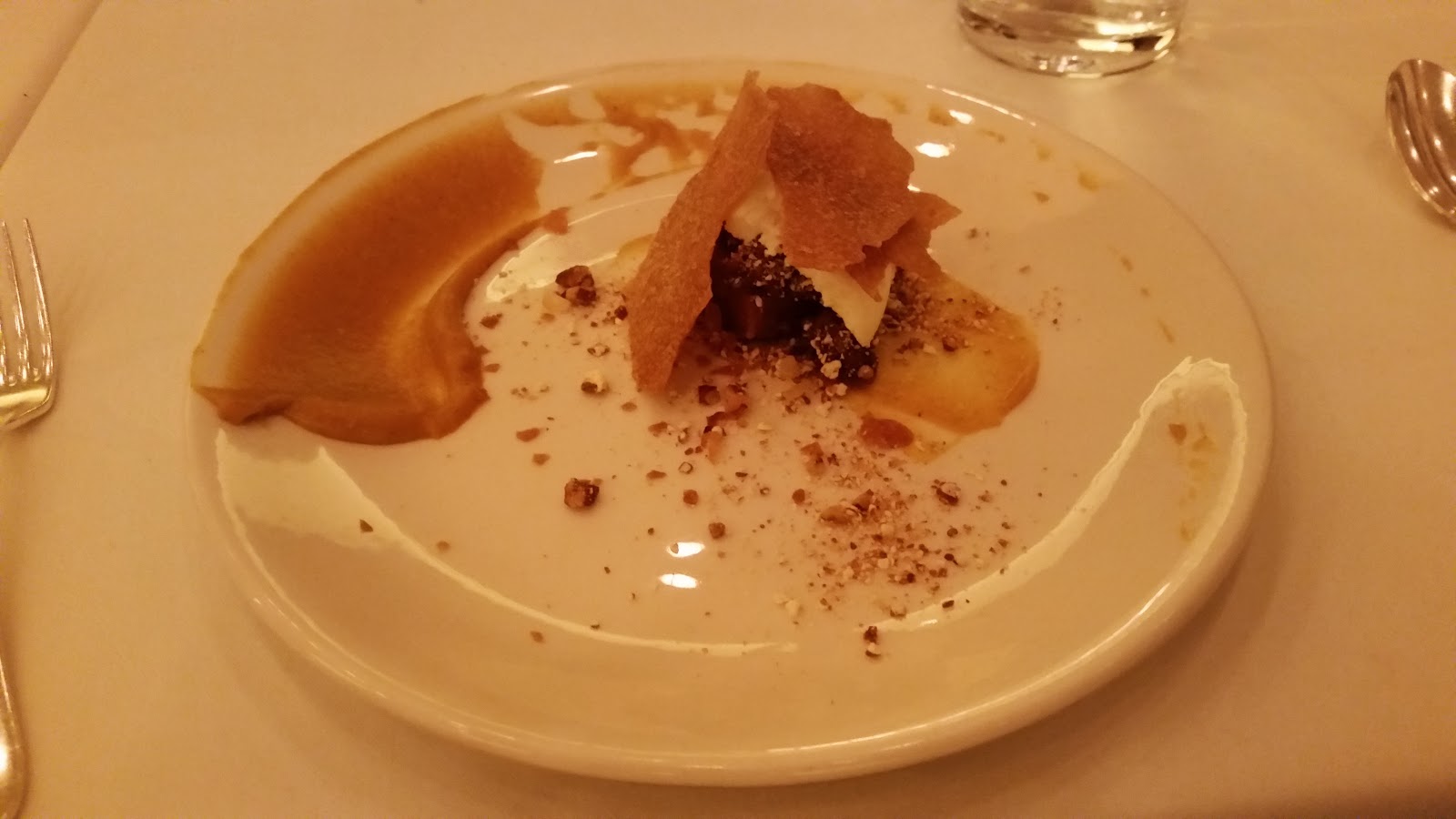 This was the other miss of the night.  It's just my personal taste, but it was way too sweet for me.  I'm not sure how "gooey butter cake" is made, but it probably involved lots and lots of sweets.  The mixture of textures with the whipped goat cheese and caramelized strudel was quite good though.  I'm glad to have tried it, I'll know that it's probably not my cup of tea to order in the future. 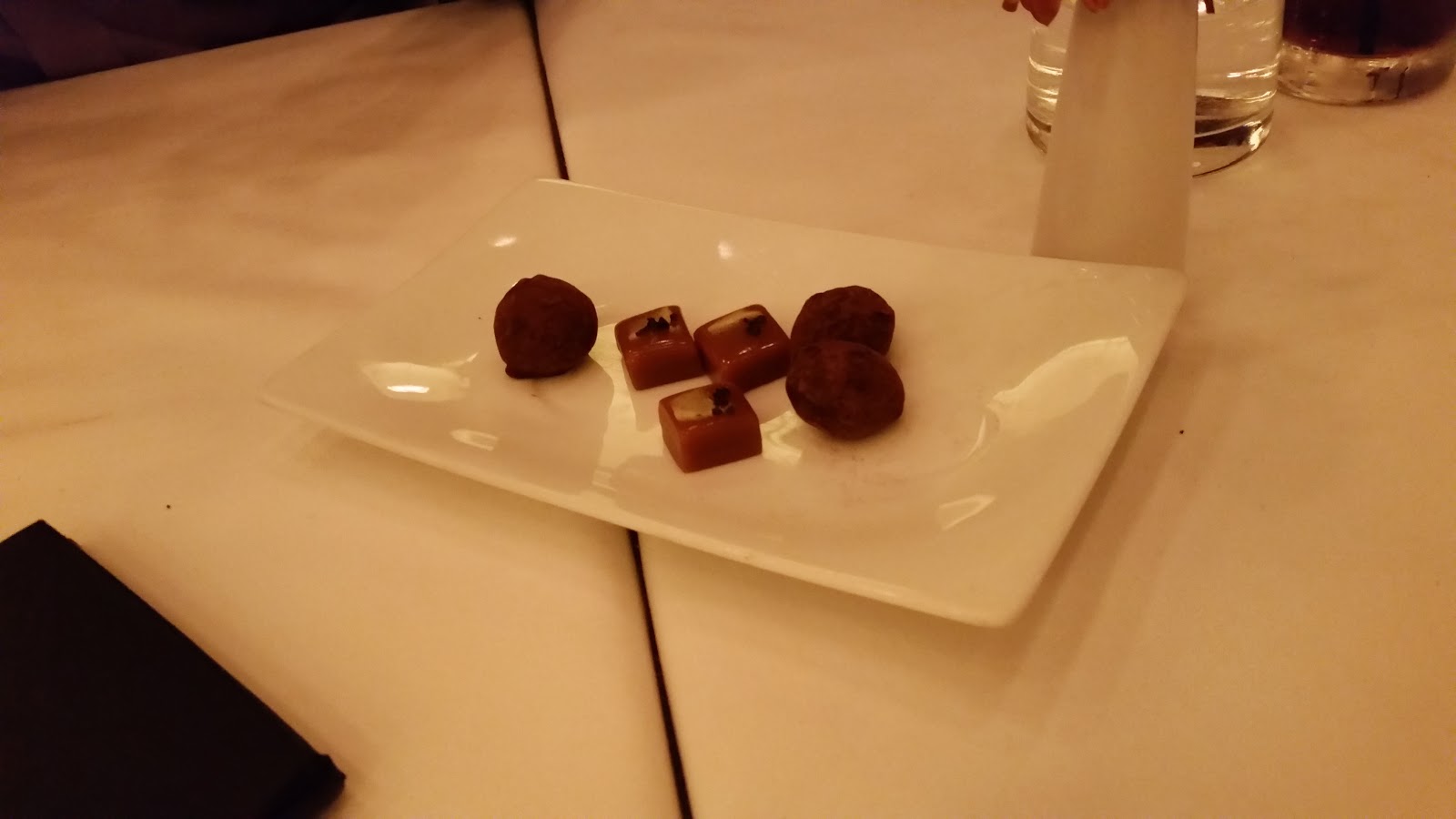 Overall, it was a good tasting, however I think there were too many misses for me.  It's not a knock against Blackbird itself, as they were off due to my personal dislikes and tastes.

I noticed on their website the tasting menu from a few weeks prior was posted.  On that tasting menu, seared sea scallops were served instead of the ivory char, grilled lamb instead of the sirloin, and a grilled pear dessert instead of the gooey butter cake.  Based on the descriptions of those dishes, those probably would have made the tasting a lot better for me given my particular tastes.  This is very likely due to the fact I love scallops, the scallops would have not made it two fish dishes in a row, the lamb wouldn't have had peanuts, and the grilled pear would have likely been way less sweet.

One additional fun fact, in the restrooms at Blackbird, there's a curtain. 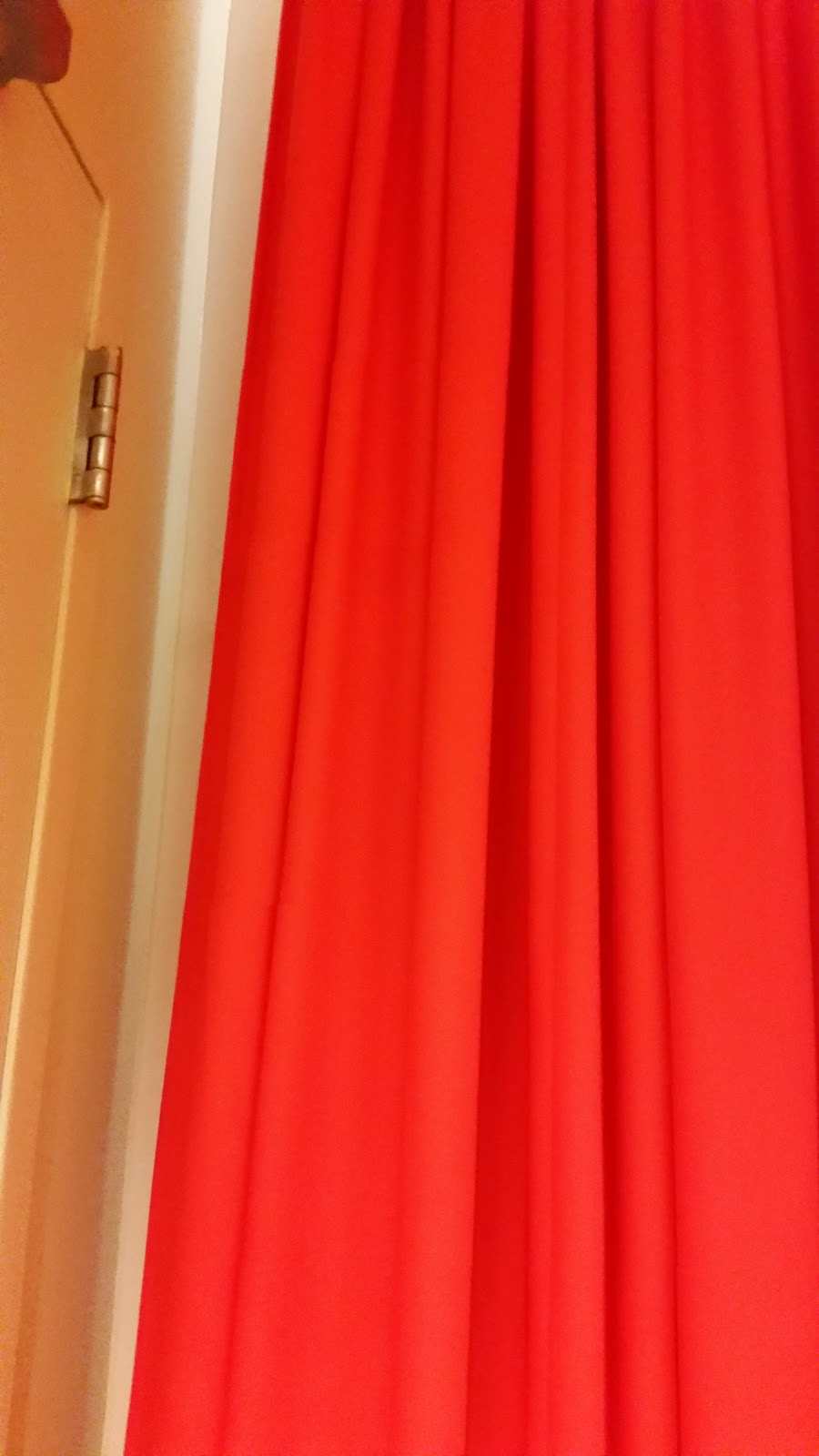 It's sort of fun to peek behind the curtain to see what's there.  There's something different in the men's and ladies restrooms.