I finally got the chance to try Gary Danko.  Gary Danko is a famed San Francisco restaurant, with multiple awards since it opened.  For years it was rated the number one restaurant in the Bay Area from Zagat (although it recently fell to number two with Kokkari Estiatorio taking over #1).  It was recently listed at #6 on Yelp's best restaurants in America.  It's had a Michelin Star for years.

To be honest, I wasn't sure if I would ever dine here simply because Gary Danko is old school and only takes reservations over the phone.  I'm sort of lazy about doing this and find the online reservations just too convenient.  However, my girlfriend took charge and snagged a reservation.  According to her, you do need to be on the dot about calling 2 months ahead of time.  She called a tad late and couldn't get the reservation time she really wanted.

Gary Danko's menu reminded me a lot of La Folie's.  There is a price fixe menu where you can pick 3, 4, or 5 different items off the menu, ranging from appetizer to dessert.  To my knowledge, there was no limitation on what you can choose from.  The staff also said that you can cancel or add orders on later on if you are insanely stuffed or still hungry.  However, they ask that you pick ahead of time because they will adjust the portion sizes of the courses depending on how many you want.

There is a also a five course tasting menu available, although the five courses come from the price fixe menu.  It's there mostly for those who don't want to pick and choose anything off the menu.  I think that was different than La Folie's, where the tasting menu was other specialties.  You can have a caviar service beforehand too.

My date and I went with picking 4 items off the price fixe menu each so we could try a lot of different things.  We each picked an appetizer, seafood, meat entree, and dessert course.  We also got caviar service beforehand. Here's an overview of the meal. 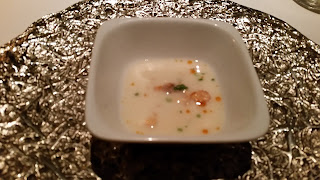 First up, we got this small amuse bouche soup.  Overall quite tasty.  I thought the nuts in the soup were interesting as I've never had them with a thai soup. 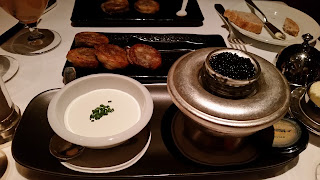 This was the caviar service.  As you can in the picture, the caviar comes with some buckwheat blinis and some creme fraiche.  After the caviar we tried at La Folie, I was a little hesitant to try this because it was a full ounce of caviar instead a half ounce, so I thought it might be way too filling.  However, it was not that filling overall.  The buckwheat blinis were quite light compared to the lobster potato blinis.  Overall, this was delicious.  I think at some restaurants the caviar can be drowned out by the creme fraiche, but here you can control the balance. 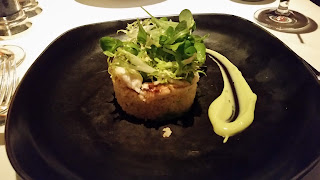 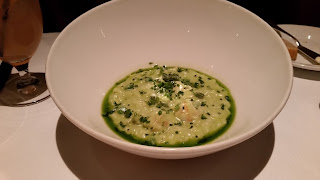 For the first course appetizer, I got the crab salad you see above.  It was circle molded mostly with bulgar, which is a grain I was completely unfamiliar with.  I thought it was quinoa at first.  Overall, it was light and refreshing.  A good start to the meal.

My +1 got the risotto you see in the bottom photo.  This is apparently one of Gary Danko's signature dishes.  We were told by friends to get the lobster risotto, but we didn't see it on the menu.  The waitress said that the recipe is identical but the key seafood ingredient may be different depending on what's in season.  So this was with shrimp and crab.  I tried a few bites of and this and the risotto was very rich and creamy and delicious.  I can understand why it's considered one if their signature dishes.

My one comment to those who might be interested in getting the risotto, do not treat this dish as an appetizer.  While it may be a portion size of an appetizer and not an entree, it is a risotto.  It's definitely on the heavy side.  Treat it minimally like a seafood course and not just an appetizer. 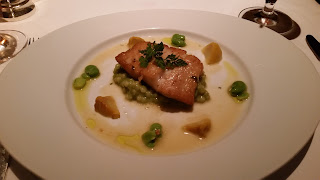 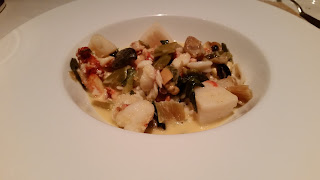 For the seafood course, I went with the sea bass.  Overall quite good, although I would have preferred it to be undercooked a tad more (by no means was it overcooked).  It's worth noting that the overall portion of the sea bass was relatively small, almost to appetizer level.  Dunno if that is by design given we each got 4 courses.

My +1 had the thai curry you see in the bottom photo.   It's hard to tell in the photo, but there was a bed of rice with some peanuts which everything was poured over.  Of the few bites I tasted, it was really good.  It was a lot more food than my seafood course.

I should say that one of Gary Danko's signature seafood dishes is apparently the lobster over potato puree.  We had had lobster the prior night so simply decided to get other dishes.  However, looking over at the table next to us, we wondered if we should have gotten some more :-) 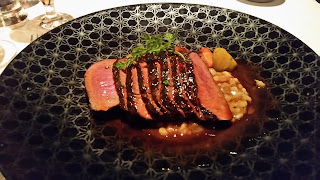 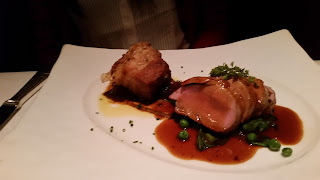 For the main entree I went with the lamb you see above.  You can get it cooked per your desire, so I went with my usual of medium.  When I looked at the lamb more closely, I was a little surprised that it appeared to be grilled/roasted instead of sous vided.  You could the "lines" of inconsistency in the meat (you can probably see in the photo the different shades of pink).  This isn't a knock at Gary Danko in anyway.  If anything, I think it's refreshing to see that some higher end places still do this.  I was simply surprised as I figured most higher end restaurants sous vided all of their meat nowadays (such as the perfectly consistent pink wagyu at Keiko and Alexander's).  Overall, this was really good.  About as perfectly medium as I think you can get.

My +1 got the pork tenderloin dish you see in the bottom photo.  I tried one chunk of her pork tenderloin, which I found very tender and delicious.  I was less enthused with the pork belly, but that may be because both of us prefer pork belly when it's slow cooked (such as it was at Kin Khao). 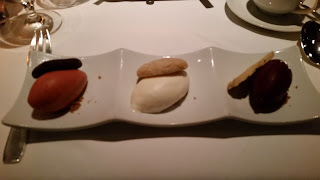 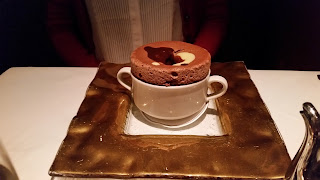 Wanting to get something sort of light for the end of the meal I choose the sorbet sampler.  Normally at restaurants, I think you get 3 tiny scoops to try.  Oh boy, that was not the case here.  These scoops were big, and the cookies perhaps remove the "lightness" of the dessert.  I'm not sure what types of cookies came with each sorbet (chocolate, sugar, and biscotto?) but the sorbets were strawberry, creme fraiche, and blackberry.  The sorbets were a bit light and airy, which surprised me.  Unsure of how they make the sorbets compared to most places.  But overall delicious.  Although it still doesn't top the berry sorbet from Chez Panisse.

My +1 got the chocolate soufflé you see on the bottom photo.  When they bring out the soufflé, they punch a hole in it and pour two sauces in.  I saw this at another table first and took a video when ours came.

I believe the sauces were vanilla cream & belgian chocolate.  Of the bite I took, it was really light and airy.  The table next to us got a lemon soufflé which also had some ice cream put on top.  I think I'll have to get that next time. 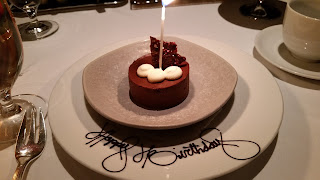 To my surprise, the staff brought out this surprise birthday cake for me.  At this point in the meal, I was pretty stuffed and just took a bite or two of this.  My primary reaction was that the cake was really rich.  I probably could have enjoyed this more if this were my only dessert, but with the sorbet above, I was stuffed on dessert. 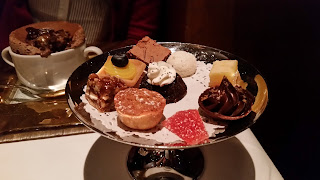 Finally, some petite fours at the end.  No particular comments because i wasn't able to try all of them, in fact we couldn't even finish all of them.  I thought it was interesting that they offered a random assortment of individual petite fours.  Most restaurants always offer them in pairs, so everyone at the table can try each one.

Last but not least, we got some pineapple cakes to go. 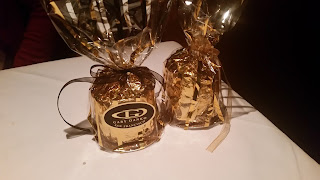 I'm allergic to pineapple and didn't try these, so sorry, can't comment on them.

Overall, the meal took three hours.  Which I think is one of the reasons we were able to finish as much as we were able to.  If they had brought out some dishes far more quickly, we would have been insanely stuffed.  Discounting the extra birthday cake, I think the four courses and caviar service were a perfect amount.  I think that 5 courses is very doable but needs to be managed carefully with lighter selections.  If you get some of the heavier dishes, such as the risotto, then you'll have to adjust.  My girlfriend struggled a bit with her selections due to the risotto and thai curry over rice.  It was just a tad much for the first two courses compared to my crab salad and sea bass.

A great meal overall.  One comment for people coming here wondering if they want to go to Gary Danko.  The restaurant certainly sways on the "classic" side of the fine dining more so than many of the other restaurants on this blog.   As an example, the Thai curry over rice from above?  You probably wouldn't find anything like that at Al's Place or State Bird Provisions.  So for those looking for something more avant garde, Gary Danko probably isn't the restaurant you're looking for.  For those who are seeking something more classic, Gary Danko is perfect.
Posted by Albert Chu at 12:00 PM