Recently I hit up the famed Din Tai Fung in Santa Clara, CA.  Normally, I wouldn't blog of a somewhat more casual restaurant such as Din Tai Fung, but given the insane hype surrounding this restaurant, I thought it worthwhile to write up about my experience.

Din Tai Fung is a famous Taiwanese chain famous for their dumplings, especially their soup dumplings/xiao long bao.  They got locations all over the world but this is their first outpost in Northern California.  They've been featured on Anthony Bourdain and I recall seeing them in a documentary about Taiwanese food on Netflix.  A number of years ago I went to the original Din Tai Fung in Taipei.  My reaction at the time was the food was good, but not great.

People have been reporting about the insane wait times for the Santa Clara Din Tai Fung after it opened in early May 2016.  Several people on Yelp reported waits upwards of 4-5 hours.  One fellow wrote about the 1 hour wait just to get his name on the list.  It sort of reminds me of the DMV.

So a few comments about this particular Din Tai Fung.  First, it's in the Westfield Valley Fair mall.  Interestingly, it doesn't have an outside entrance like so many restaurants you see in malls.  It's right in the middle of the mall next to a J.Crew.  It's in spot C33 on the directory if you're looking for it (it wasn't listed under the "Food" category b/c it's not in the food court).

Second, this restaurant only takes reservations via Yelp.  To my knowledge, all other ones don't take reservations.  Although this is just speculation, I imagine they were forced to do this because of complaints from other stores in the area.  If a hoard of 100-200 people is constantly standing outside the restaurant, neighboring stores aren't going to be happy.  There is a line for a spot at the bar though.

Third, the restaurants decor, music, and feel felt very "upscale hipster".  It reminded me of hip "fusion" restaurants you might see in various spots in the Bay Area.  It's a far cry from the far more simple/casual Din Tai Fung I went to in Taipei and felt like an attempt to feel more hip.  Obviously it's different markets and different cultures and thus different marketing, but some of the charm seems to be lost.  For example, the Din Tai Fung mascots were no where to be found.  Here are pics of mine from Taipei. 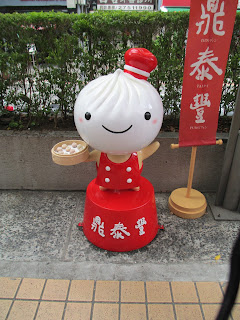 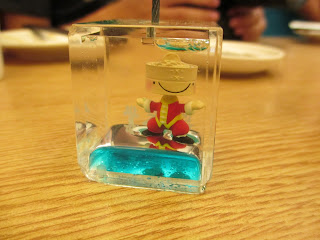 I know it's an American market, but how can you not have these mascots around?

Anyways, on to the food.

Basically, there are 6 sections on the menu.  Appetizers, soups, vegetables, dumplings, noodles, and dessert.  While you can technically fill up on dumplings, you probably want to add various random other things to round out the meal.  It'll take a lot of  dumplings to fill you up since they are on the small size.  An additional side note, most of the non-noodle soups are individual bowl portion.  If there's noodles in it, it's a bit larger and can be shared.

So this is what we got. 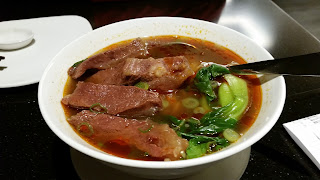 This noodle soup is apparently one of the Din Tai Fung's more well known dishes.  Spicy beef noodle soup is a pretty well known Taiwanese dish.  Overall, this was really good.  Not too spicy and a lot of flavor too it.  I also really like the noodles, the perfect chewiness level I like. 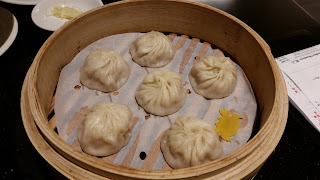 First up, the park & crab xiao long bao.  You may notice the little yellow crab cut out on the lower right so you know these are the crab dumplings.  Overall quite good.  But the crab and pork flavor combined isn't my favorite.  The better dish is the one below. 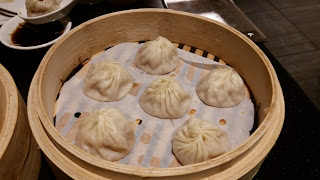 These are the famed Din Tai Fung XLB.  Compared to some other restaurants, the dumplings would be considered on the small side.  However, each one was perfect and delicious.  Better than what I remember in Taipei.  All with a healthy amount of soup. 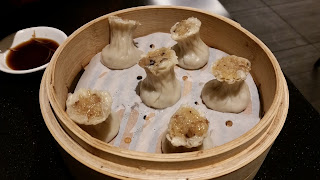 These shao mai are apparently another half-famous dumpling from Din Tai Fung.  I remember having these in Taipei and didn't like them that much.  I didn't like these that much either.  This is just a personal taste of mine.  The sticky rice isn't a flavor I love to begin with, so putting it in a dumpling form won't work for me.  So please take my review of this dish with a grain of salt. 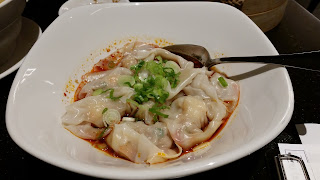 We originally wanted to get the Taiwanese style potstickers but they were out this day.  The waiter recommended these saying that most people skip this dish because it says "wonton" in the title (and apparently he said Tom Cruise loves this dish).  I ended up really liking this dish.  It wasn't too spicy.  Just a good balance of spiciness.  Overall, I'm glad we got this dish.

At this point we were still hungry, so we ordered two more dishes. 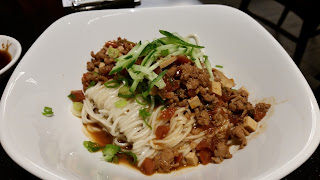 The noodles were tasty, I think the same type of noodles that were in the beef soup above.  However, I was a little disappointed in this dish.  I think we thought this dish was chah chah mien, but it seemed to lack that fermented bean flavor.  Overall, not a bad dish, but I wouldn't order this one again. 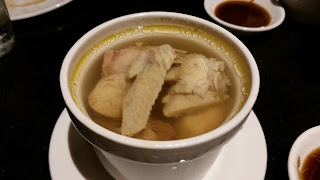 Apparently another house specialty is the chicken soup.  You can get it with noodles if you want, but we just got a bowl to try the broth.  All I can say is broth is delicious.  You'll want to get this as a side for your dumplings.  You feel really healthy after eating this.

Overall a great meal.  Definitely better than the meal I remember in Taipei.

However, how do the dumplings here compare to the rest of the bay area?

I've blogged before about the best xiao long bao in the bay area.  Where would I put Din Tai Fung compared to them?  I probably wouldn't put it in the top couple, it might go somewhere in the #3-#6 range.  But I think I realize why Din Tai Fung is so famous for their dumplings.

Din Tai Fung regularly advertises that they have "mastered" the formula for perfect xiao long bao.  In their kitchen, you can see cooks precisely weigh every dumpling skin and dumpling filling before completing a dumpling.  Din Tai Fung states that every xiao long bao has exactly the same number of folds when it's made.

This is probably what separates Din Tai Fung from others.  Every single dumpling we ate had a consistent amount of soup in it.  Every dumpling stayed intact when lifting it off of the parchment paper.  There is a lot of consistency in their product.

I've been to a number of other places where some of the dumplings had soup in it and others didn't.  Other times, the soup began leaking when I lifted it off the parchment paper or cabbage leaves.  In fact, my top ranked XLB in the bay area is Shanghai Dumpling Shop in Millbrae.  The first two times I went there the XLB were phenomenal.  But the third time I went there the XLB didn't have a lot of soup in it and was bland.

I couldn't help but remember this video I saw on YouTube a number of years ago about Shanghai Dumpling King in San Francisco (my #3 on my list).

Around 1:03 you'll see him begin to make the skins for the dumpling wrapper.  As you can see, he just does it by hand and just knows how much is perfect.  There's no measuring of any kind.  If he's not in the kitchen that day, will his staff know how to do it just as well?  Probably not.  I bet that's what happened when I went to Shanghai Dumpling Shop the third time.

So one thing Din Tai Fung probably does really well is be very consistent.  If you want really good dumplings, you will get it there.  There will probably be no mistakes given their meticulous precision in the kitchen.
Posted by Albert Chu at 10:44 AM