Kin Khao has both an a la carte menu and prix fixe menu.  If you've read any of my other blog entries, I usually default to the prix fixe/tasting menu because I don't want to bother with picking items off the menu.  However, I made an exception this time.  The prix fixe menu is a collection of items off the a la carte menu.  There were 1-2 items on the a la carte menu that weren't on the price fixes that we really wanted to try, so we went with a la carte.  The price fixe is a pretty good deal ($55 per person) to try a number of items on the menu and we ended up paying a similar price for the 5 dishes we selected below.

Here's an overview of what we had. 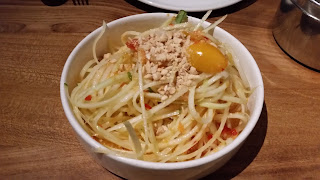 First up was this papaya salad.  I've had similar salads at other restaurants before, but I don't recall them being as spicy as this one.  Overall, very tasty.  A good light start to the heavier stuff coming below.

This is the dish that basically made us not get the prix fixe menu.  It seemed so different from anything else I'd ever seen at a Thai restaurant before.  In fact, the menu actually said something like "This is not for beginners" on it.  That made me want to try it even more.

The menu description isn't that clear about what this is though.  The shrimp paste, pork jowl, and catfish are all in the jar you see in the picture.  You mix it all up together to create a paste/sauce.  The waitress said you should put it over rice.  It also comes with a collection of vegetables and fruit to dip into it too.  It's hard to tell from the picture, but it includes cucumber, asian pear, raddichio, green mango, carrots, radish, Thai eggplant, what I assume is chicory lettuce, and one other vegetable that my date and I were unsure about (maybe daikon?).

Short answer, as the menu description says, it really is an umami-bomb.  It's absolutely delicious over rice.  I didn't actually like it too much with the vegetables, as I think it was hard to dip everything into it.  I ended up taking some of the vegetables out and sort of making a salad with it and putting some of the paste on.  After the spicy papaya salad above, it was good to get all of the veggies and fruit to balance the spiciness.

My one only weird criticism of this dish is it is very very savory.  After eating about 1/2 of it the dip, my date and I couldn't eat anymore.  I think it'd work out much better if there were 4 or more people to share it. 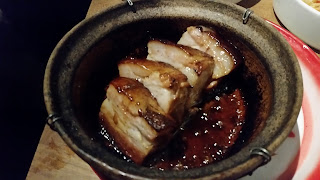 Holy cow, this is one of the best pork belly dishes I've ever had.  It was super soft and gelatinous.  It reminded me of the pork belly from French Laundry.  Really really good. 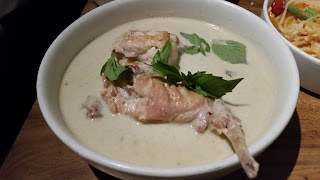 We felt obligated to try a curry since we were here.  We eventually settled on this rabbit curry, because I don't think I've ever seen a rabbit curry at a Thai restaurant before.  The curry was a medium spicy, but not as spicy as the papaya salad above.  Over rice, it was really good, however the star of this dish was the meatballs.  They were delicious.  Much better than the rabbit meatballs from The Progress. 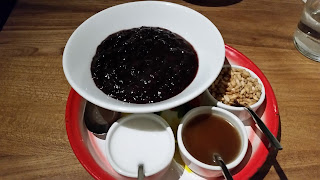 This was apparently the only dessert Kin Khao has (according to the waitress which we overheard at a table next to us).  We wanted to try this before coming here, so we didn't bother to look at a dessert menu if there was one.

The black rice putting comes with all the extras you see in the picture.  The waiter said you can use it to build a sundae-like dessert.  I think the black rice pudding was a tad bland by itself, but with everything else together it was really tasty.

Overall a good meal at Kin Khao.  I definitely want to go back as there were multiple other dishes I wanted to try.  The chili jam clams and spicy squid were the two dishes that caught my eye.  Pad kee mao is my favorite Thai noodle dish and unfortunately it was not on the menu during my visit this winter.
Posted by Albert Chu at 9:53 AM