Earlier this year I was able to hit up the much hyped Al's Place and loved the meal.  My girlfriend and I were in the area and were able to snag a last minute cancellation that opened up a spot in OpenTable.  That's how I've gotten both of my reservations at Al's Place, so it's just luck at the end of the day.

I'll leave details of the restaurant in my prior post.  There were a number of new items on the menu that rotated in so we ordered mostly new things off the menu.  We stuck to a similar formula, getting food from each of the sections on the menu.  This is what we got. 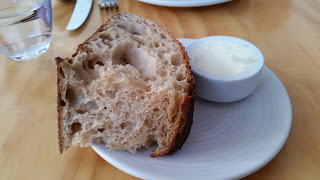 After the last trip to Al's Place, we noticed at the bottom of the menu it said "bread available upon request".  Oops!  Made sure to get some bread this time.  It can come with oil instead of butter if that's your request. 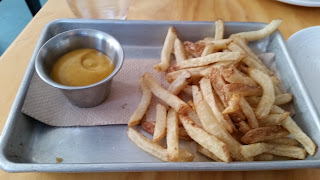 We actually got this dish last time at Al's Place.  I didn't think much of the dish at the time because I thought they were "just fries".  I read later on that the fries at Al's Place were actually pickled and had a unique flavor to them.  I don't know if they were last time and I just didn't notice or if they weren't cooked that way.  The menu from last time clearly just says "french fries", while this time the fries were listed as "brine pickled french fries".  My girlfriend had a craving for them so we decided to give it another shot.

This time I paid attention and clearly tasted the pickling.  After a few more pieces, I suddenly loved the flavor.  The taste is subtle, so it can be missed.  But once you realize it's there, it's delicious. 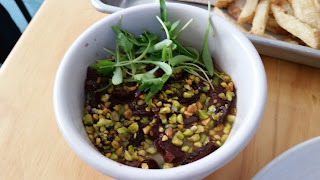 We grabbed the chawanmushi to try a different "snackle".  The photo may not clearly show it, but the dish is sort of small.  Overall, an ok dish.  The mushroom broth definitely changed the flavor and I was surprised it didn't taste like typical chawanmushi.  You can't see the chawanmushi beneath everything in this picture, but it was a light brown color instead of the typical light yellow.  I loved the cherries in this dish, but I think the pistachios were a bit too "crunchy" to me.  The contrast and textures may be more gratifying to others.  In contrast, I preferred the chawanmushi from Kusakabe and State Bird Provisions. 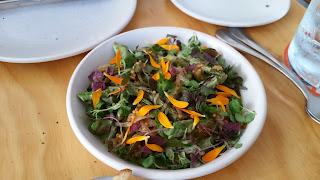 Now onto some of the entree portions, first up were the cold/cool dishes.  The asparagus appeared to be grilled/pan fried in some way b/c there were char marks on them.  Obviously cooled down later.  I have no idea what "peach thinning relish" is.  There were some seeds on top of the dish that I couldn't quite place, so perhaps that's what the relish was?  Overall, nice light dish. 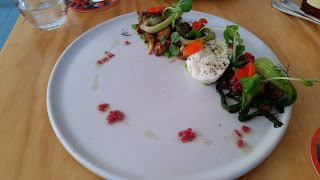 This dish had lot of flavors and textures, really liked it.  Underneath everything you see here was some of the pistachio mousse and mashed peas.  Not sure why it's called "General Leo's" cauliflower, but perhaps it's a play on "General Tso's Chicken"?  The cauliflower by itself had a very "Asian" flavor to it although I couldn't quite figure out what it was. 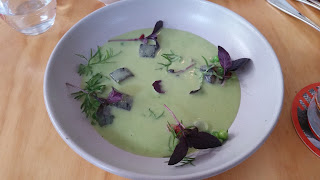 Now onto the warm dishes.  We got only one, which was this soup.  The black square chunks you see in the picture was the chunks of yellowtail.  In the soup were peas and chunks of pickled strawberry.  I loved the pickled strawberry.  Similar to the fries above, they taste like strawberries but have a hint of pickling to them.  Overall, a tasty dish. 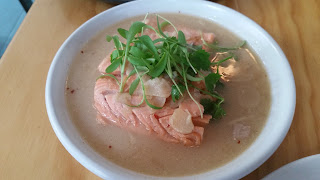 Just like last time we got two meat "side" dishes.  The first one was this trout in tom yum nam khon soup.  I was a little afraid of this dish since I'm not a fan of tom yum soup from Thai restaurants, however this dish was no where near as sour.  I later learned online was that there are two types of tom yum soup.  One with a clear broth (Tom Yum Goong Nam Sai), which is what most restaurants probably serve.  The other is the above (Tom Yum Nam Khon) which has some coconut milk in it, which is one of the reasons it was less sour.  Overall, really tasty. 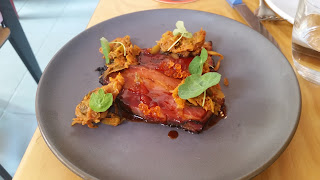 Finally, we got this pork belly dish which was awesome.  I had to look up what galangal is, but it's a sort of ginger-like root.  I assume the soda was used for the marinating of the pork.  The star of this dish was the brussel sprout + apricot chi, effectively pickled kim-chi style.  (At this point it's clear there's a ton of pickling at Al's Place, the third time I've mentioned it in this post.  Somehow it was mostly missed the last time I came here.)  It was delicious.  Perhaps my favorite dish of the night, only challenged by General Leo's cauliflower. 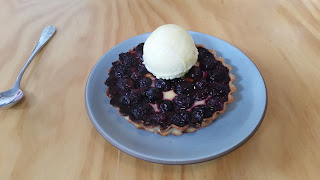 The dessert options were very similar to the last time we went although with a different seasonal fruit.  The citrus salad was now strawberry and the pear tart is now lemon/blueberry.  We stuck to just one dessert this time and got the tart with lavender ice cream.  Delicious.  I have a preference for blueberries so I enjoyed this a bit more that the pear tart.

Overall another good meal at Al's Place.  I preferred the meat "sides" this time around more than the last time, but I liked the vegetarian/pescatarian dishes a bit more last time.

Al's Place does have a bit of a small menu.  Somewhere on the order of 20-24 dishes not counting dessert.  We've now hit up a fair percentage of the menu, so we decided we'll have to hold off on going back to Al's Place for awhile.  Let a few more dishes rotate into the menu before heading back.