Commonwealth is a restaurant I've had on my "go to" list for quite some time.  It was ranked all the way at #75 on the best restaurants in the United States in Opionated About Dining.  It got a very good review from the San Francisco Chronicle.  It recently got awarded a Michelin star.

The restaurant offers an a la carte menu of various items or a small six-course tasting menu for $75.  The $75 tasting menu is ridiculously cheap for a Michelin starred restaurant in the San Francisco area.  In addition, the restaurant says they donate $10 of it to a local charity, which is pretty cool.

Because we didn't know what else to order, my date and I defaulted to the tasting menu.  Here's what we got. 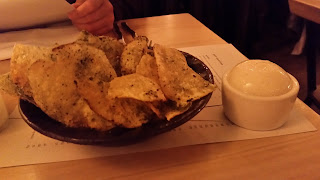 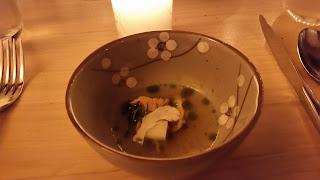 Next we got this amuse bouche dish.  It was served cold-style, which I thought was interesting for fish and broth.  There was also (what I assume to be) a gelatin cube of cauliflower in the broth. 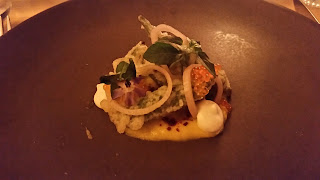 The first official course from the tasting.  This was pretty tasty, although after tasting it, my date and I wondered why the okra was battered & fried for this dish.  Perhaps to just offer contrasting textures?  I think it would have been better with the okra fried without the batter or just pan fried. 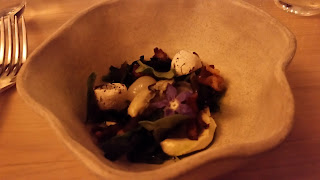 Unfortunately it was dark in the restaurant so it may be hard to tell in the photo, but those egg-shell looking things are the potatoes cooked in the clay.  The cooking process gave the potato skins this shell-like exterior which was really interesting.  There's also a gelée of sake in the middle of the dish (it looks like a white grape).  Overall an ok dish.  I think the combination of potatoes, oysters, and spinach was certainly an interesting choice. 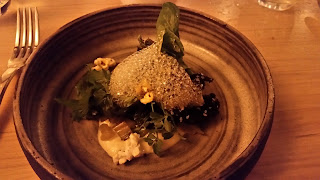 Again, it may be hard to tell in the picture but the black things with sesame seeds on it are the sesame and nori coated avocado.  The popcorn was really interesting in this dish, I don't think I've ever seen a restaurant use them in a dish.  An interesting dish overall.  I guess I'm so used to avocado as a side / sauce that it being the primary ingredient was really strange to me.  I guess I think of avocado as being such a light flavor that it's hard for it to be the main item of a dish. 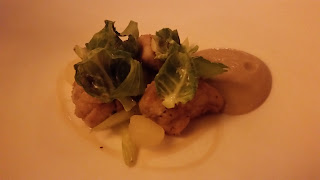 For the uninitiated, sweetbreads is the thymus or pancreas of an animal (according to wikipedia).  The waitress said this was specifically thymus of veal.

From my recollection, I have tried sweetbreads only once before, and that was a tiny tiny byte from French Laundry.  My friend upgraded a dish to include it and he gave me a tiny byte to try.  That sweetbreed was very sweet and crazy delicious.

I didn't particularly like this dish, but like most new ingredients, it may take time to understand/appreciate.  It wasn't as sweet or savory as the tiny byte I had from French Laundry.  It had a texture consistency I am having trouble describing, softer than most "land protein" but more firm than most sashimi. 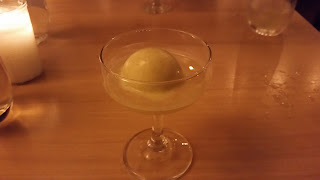 I had to look up what verjus is, but it's "unriped grape", so it's going to be more sour than typical grapes.  I really liked this.  Although technically a palate cleanser, the scoop of sorbet is quite large (first comparison that came to mind was the sorbet palate cleanser at Blackbird).  Perhaps my favorite course of the night, but I'm very biased in this because I love sorbet and have perhaps a slight preference to sour things. 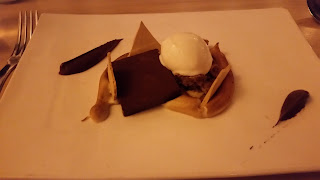 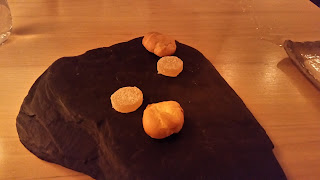 And finally some mignardise.

Overall, I was satisfied with the amount of food in the tasting and didn't leave hungry, but I didn't leave really feeling full.  Perhaps a bread course in the tasting would have left me satisfyingly full.  I'd say that the amount of food was less than the amount from Commis or Sons and Daughters.  However, keep in mind that this menu is cheaper and fewer courses, so adding on an extra a la carte course or two would probably equal things out both in price and fullness.  The entire meal took about 2 hours, which is pretty standard.

Amongst fancy restaurants here on my blog, there were a lot of misses on these courses.  Obviously, individual tastes will vary and you are at the whim of whatever the chef serves you that day.  Looking through other people's tasting menu pictures on Yelp, some more common fish and/or protein courses could have changed the entire tasting for me.

In the SFGate review I list above, the writer says something I found interesting


[The chef] continually creates combinations I haven’t seen anywhere else

Perhaps there in lies the rub for a more casual foodie like myself.  This meal at Commonwealth may have been for the more sophisticated eater, because there were many unique flavor combinations that the novice foodie in me couldn't quite appreciate or be prepared for.