I recently went to check out Sons & Daughters, a one Michelin star restaurant in San Francisco.  It offers a 7 course nightly menu and that's it.  They are closely tied to a farm, Dark Hill Farm, in which they get all their produce and some of their protein products.  Here's what the tasting went like.

Before the meal we got two amuse bouche dishes. 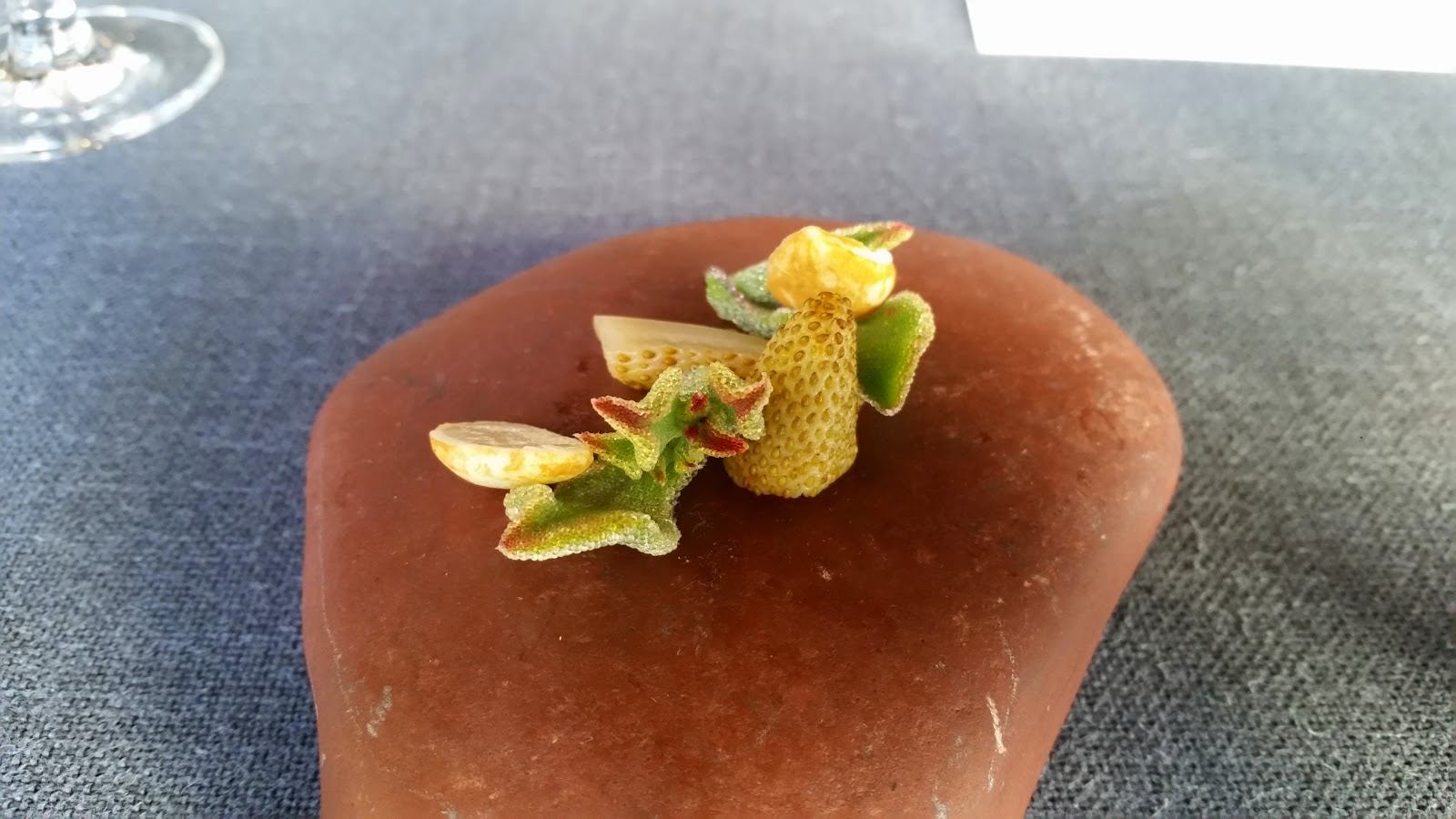 First we got some snacks from the farm.  Overall, all light and refreshing.  The one thing that hit me was that the almond "wasn't crunchy".  I don't think I've ever had fresh almonds before that had never been roasted.  I can't remember what the green stuff was but it was very "cactus/succulent-ish". 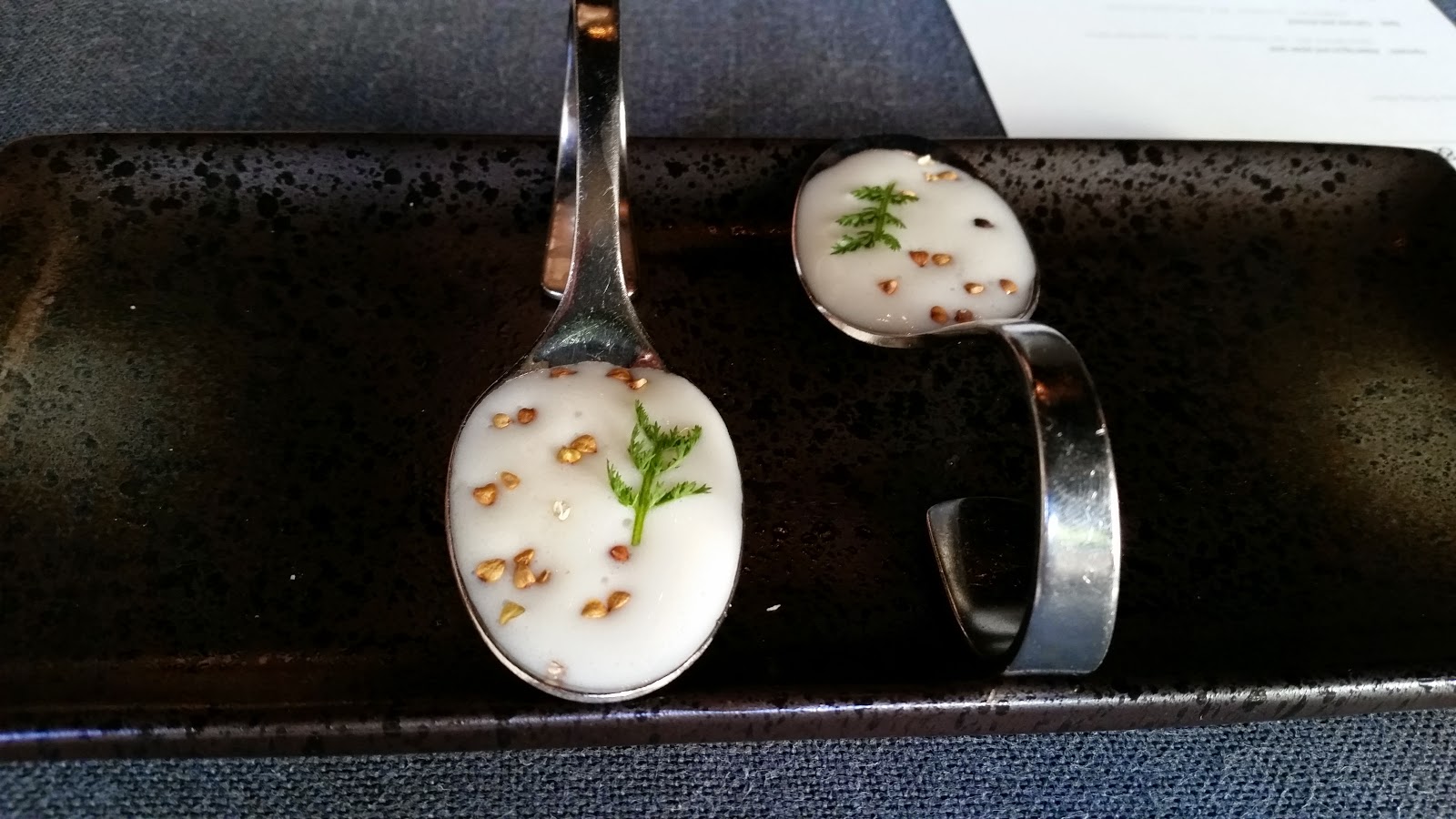 I'm pretty sure this was goats milk, although I didn't write any notes down on what the waitress said.  Again, tasty and refreshing. 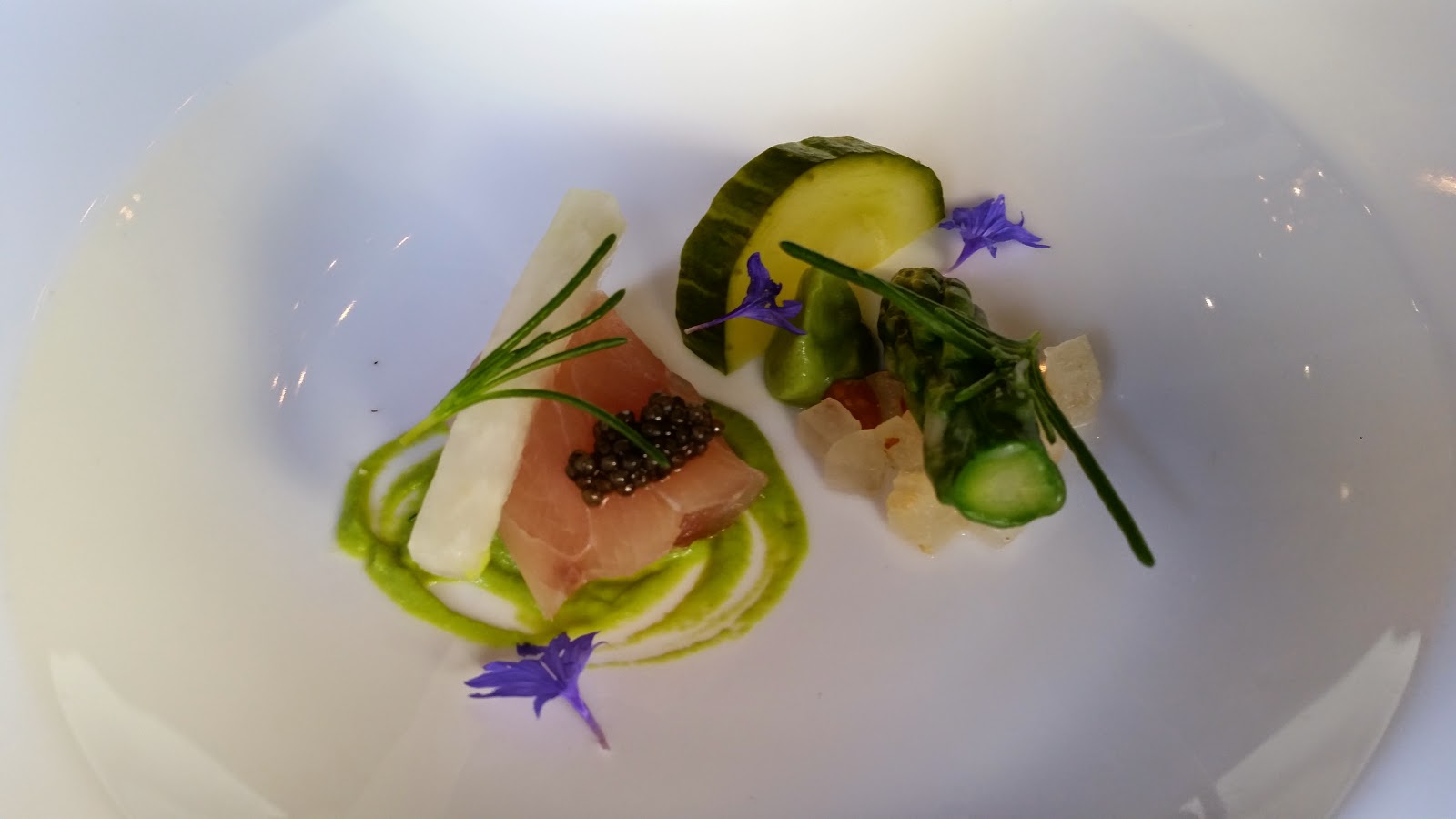 Our first course was some sashimi with various accompaniments.  I'm not 100% sure what the green sauce was, but everything as delicious together.  Probably my favorite savory dish of the night.  I did gasp a bit when eating the pickle.  I'm not a big fan of pickles and it was a bit on the vinegary side and shocked my palate a bit. 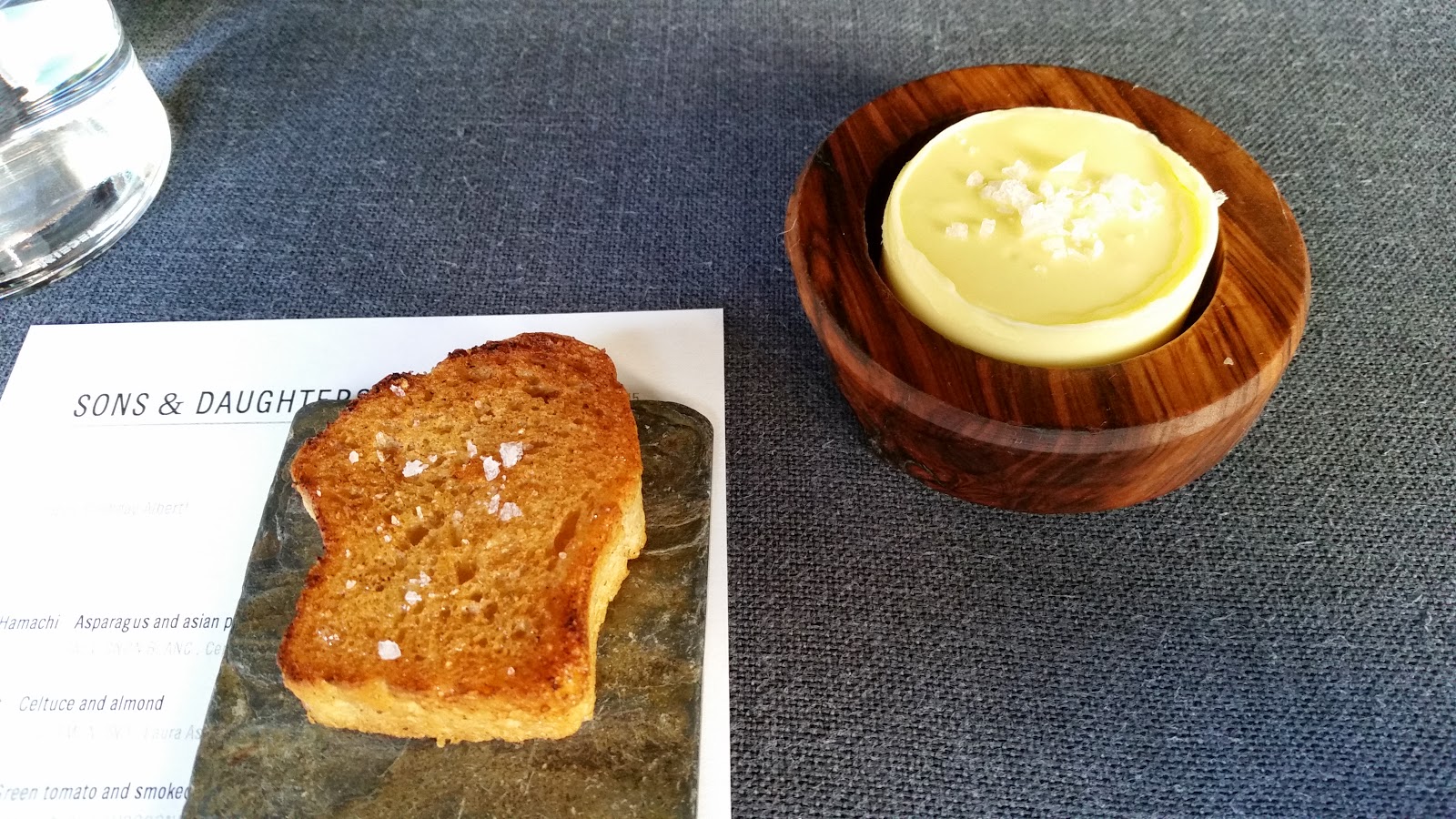 Then came the first of three bread tastings.  This one was my favorite.  The butter is housemade and the waitress said some yogurt was mixed in.  It was really creamy and tasty.

I will admit, when I first saw pictures of the bread courses from Sons & Daughters online, I assumed the bread was much larger and I was concerned about how much bread I'd eat.  Perhaps I just assumed the toast was the size of normal bread and all the rolls were normal sized.  However, all the bread courses are actually mini-sized.  I'd take a look at the butter and think about how much butter one might normally get at a restaurant.  You'll notice the bread isn't that much bigger than it. 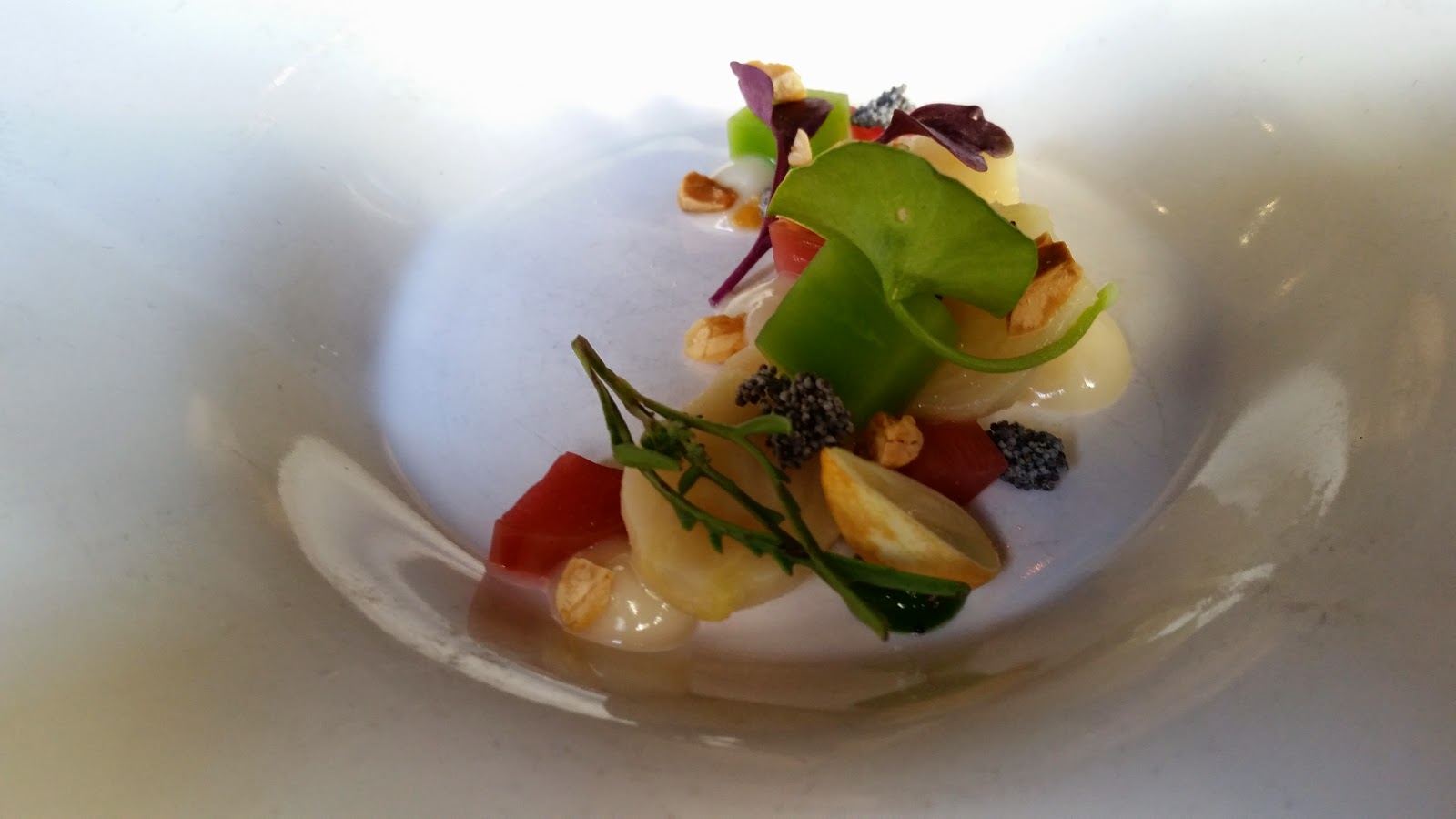 Then came the "salad" course.  This was also really tasty.  There were more fresh almonds and the sauce at the bottom was apparently an almond dashi. 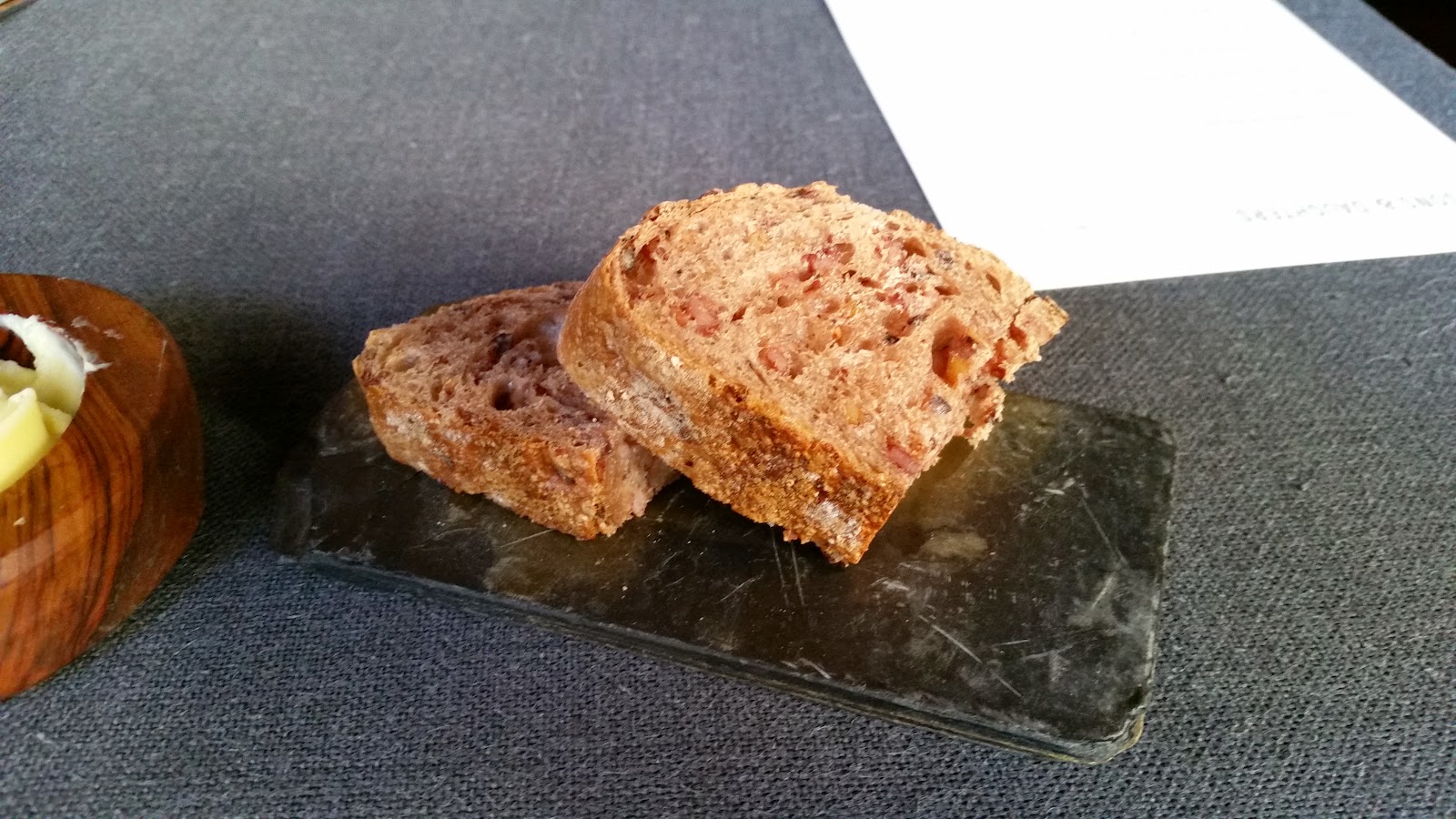 The next bread was a multigrain variety.  My least favorite bread of the night, as multigrain isn't my favorite. 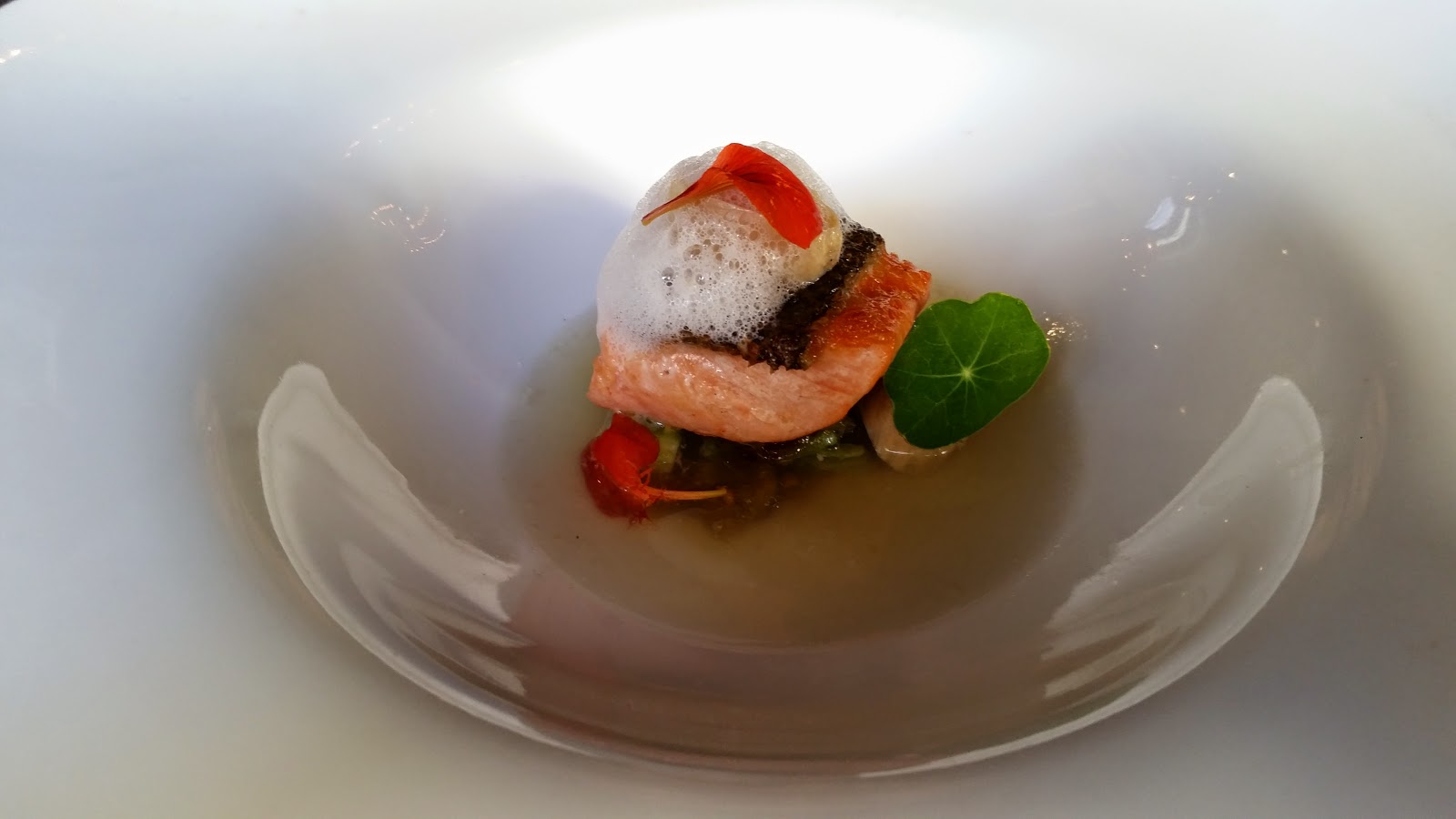 Next came our soup course.  There's not too much soup, but this course was still really good.  The clam sitting on top of the trout (with foam over it) was particularly delicious. 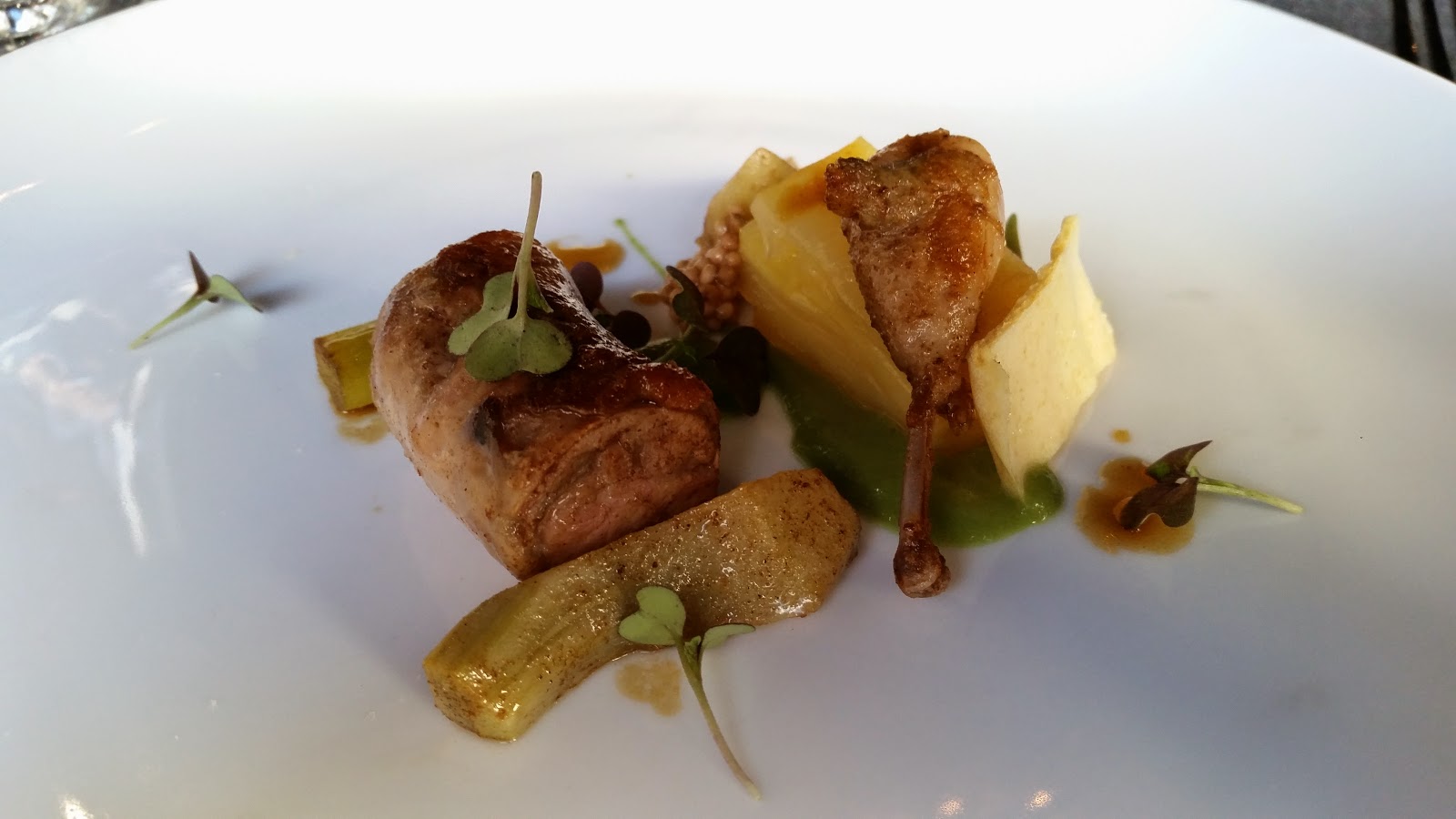 The quail on the left was a quail roulade.  The artichoke and potato in this dish was really good.  I assume picked from the farm relatively recently. 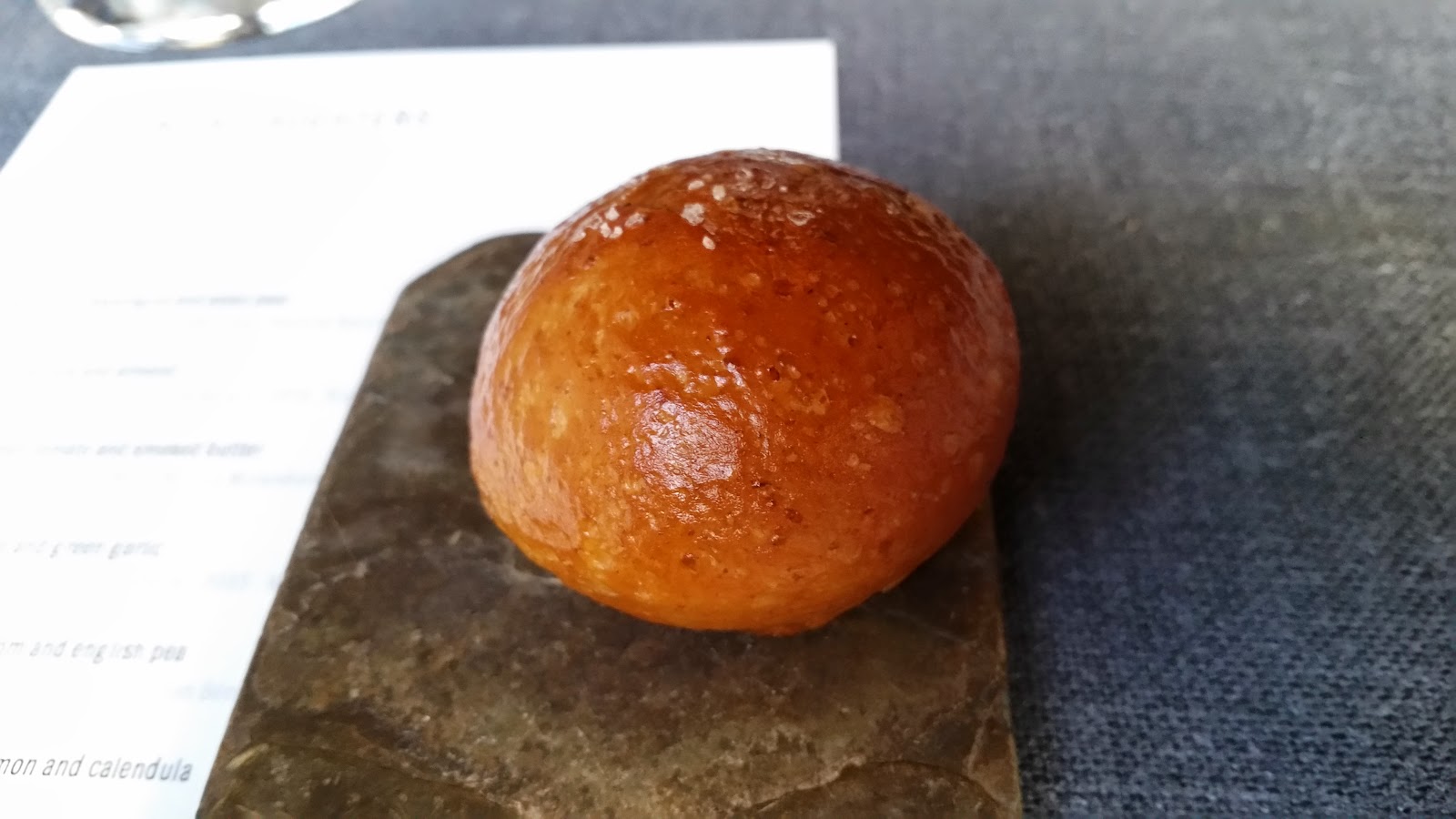 I'm not a big fan of pretzel bread, because it's normally too "pretzely" in the middle.  It just seems more like a snack or dessert than something that goes with dinner.  However, this wasn't quite as "pretzely" as others I've had (such as the one at French Laundry).  It was much softer and lighter overall.  I really liked it. 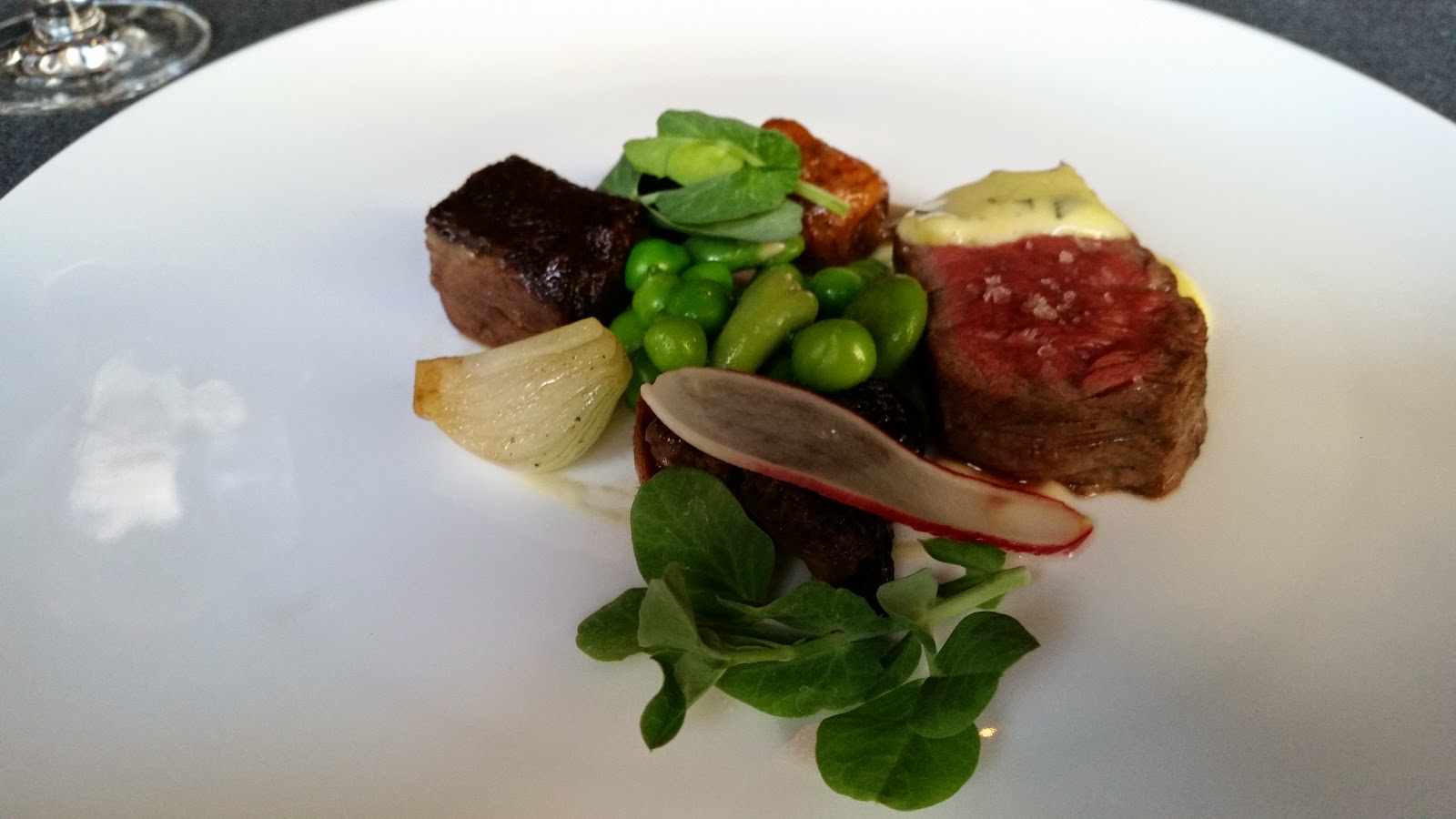 This was probably my least favorite dish of the night.  Not that there was anything wrong with it, but rather it was very "normal".  Nothing particularly interesting about the dish.  For anyone that has read my blog before, you know I hate mushrooms.  However, the morel mushrooms weren't too bad.  They don't have the normal mushroom-texture that I normally hate. 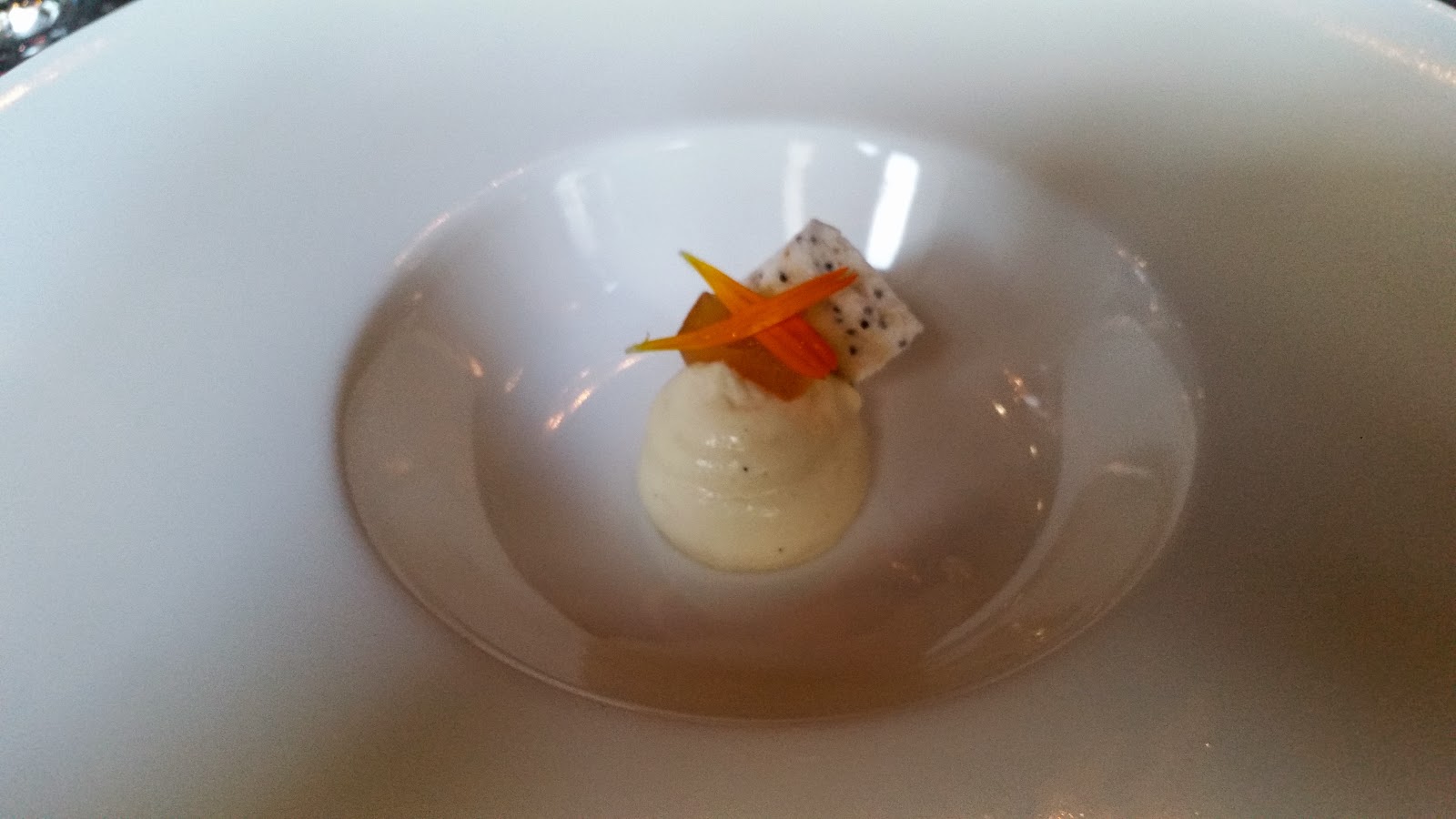 I had to look up what calendula is, I guess it's in the marigolds family.  This dish was delicious.  It was lemony and cheesy.  I'm not sure what the cheese/cracker thing on the upper right was, but that was delicious too.  It was very light and airy. 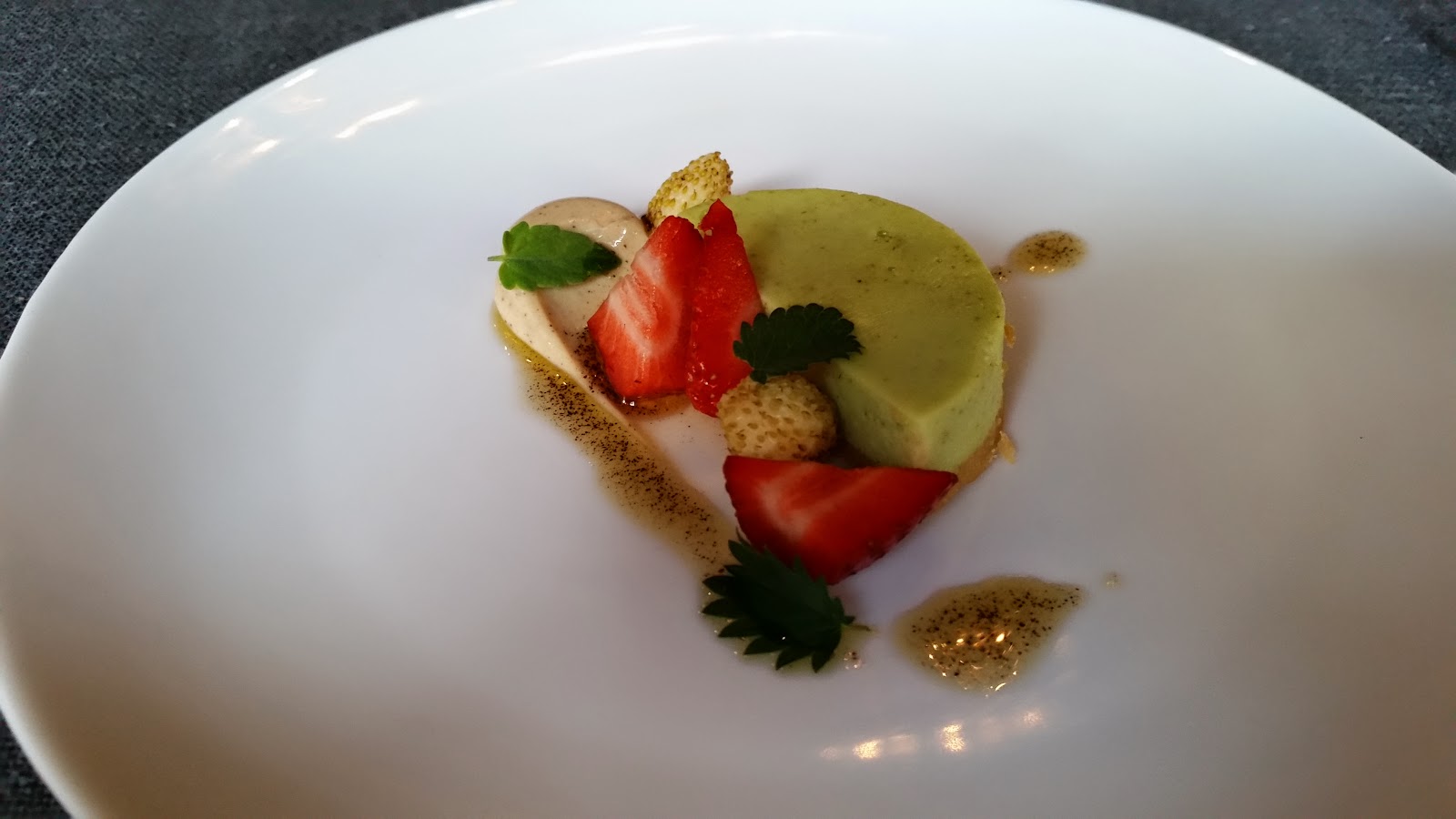 Holy cow this dessert was delicious, my favorite course of the night.  I love berries and everything was just perfect with this.  I'm not even sure what flavors were in the mousse-like thing to the upper right, but it was delicious.  I wasn't sure what salad burnet but it appears to be an herb of some sort.  Alpine strawberries are a strawberry variant that all I can say is delicious given my love of berries.  Holy cow, delicious. 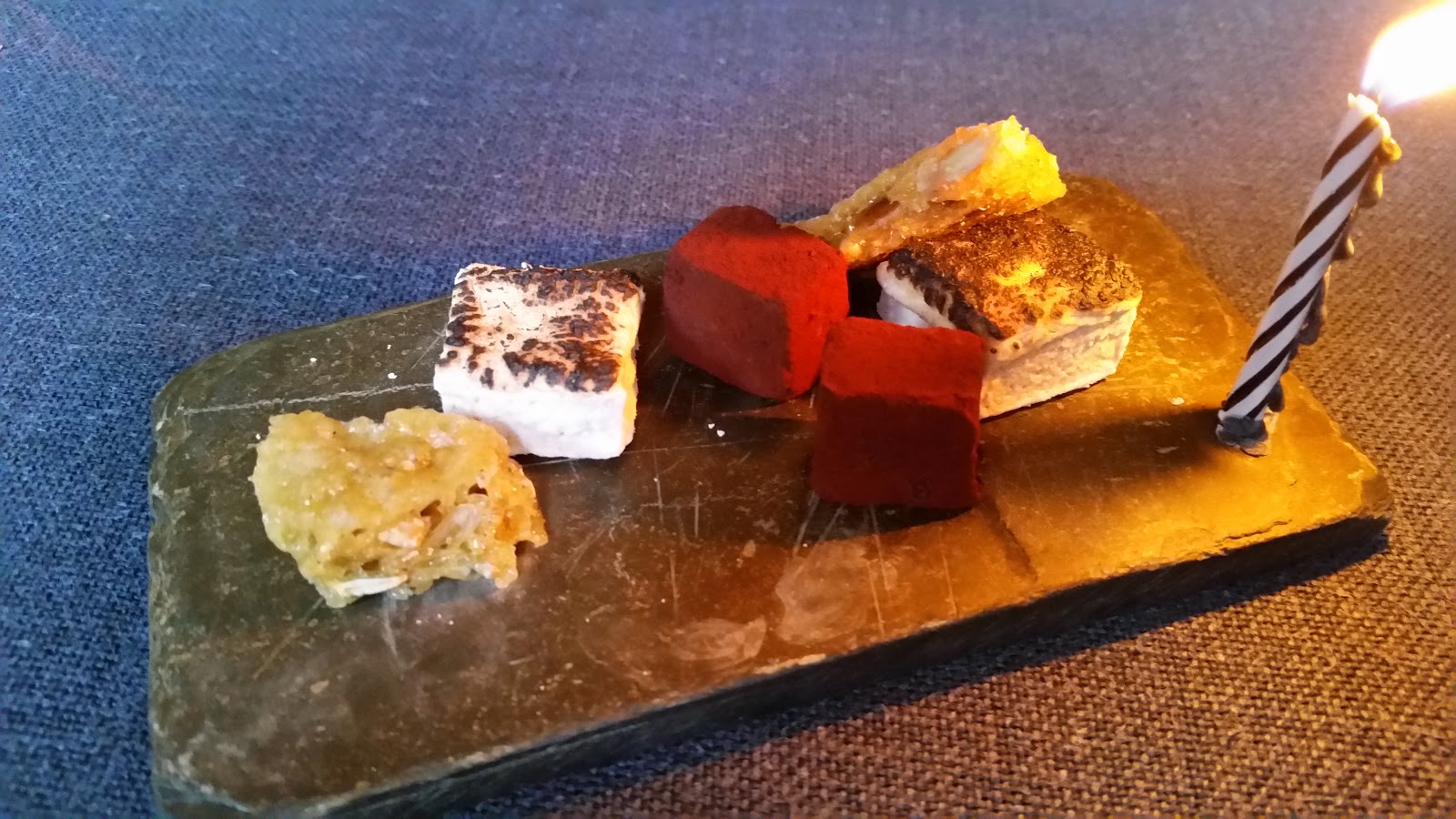 Lastly we got some mignardise and a candle b/c it was close to my birthday.  The peanut brittle was very light, not like most peanut brittle I've tried.  The chocolate was pretty interesting, as they put some herbs (I remember the waitress said atleast thyme) in the middle.

Overall the meal took about two hours and fifteen minutes.  Portions overall are pretty small.  I was probably full at a comparable level to Commis.  Not still hungry, but I definitely could have munched on something more afterwards.  Compared to other restaurants, I'd say that this is a solid 1 Michelin star restaurant, completely what you would expect from a 1 Michelin star restaurant.  Not any more, not any less.

I'll also mention we got some complimentary soda b/c it was around my birthday.  Very kind of them.  They originally offered champagne, but we got soda instead b/c I don't drink alcohol.
Posted by Albert Chu at 9:38 AM