It was just over a month ago that I spoke about how difficult it was to get a reservation at State Bird Provisions and it was easier to goto their sister restaurant The Progress next door.  The restaurant is notoriously famous for how difficult it is to get into.  Reservations are near impossible and the wait can often be 90 minutes for a walk-in table.  I suppose that's what happens when you get rave reviews, get incredibly hyped, have a price point that allows many people to dine at your restaurant, win a James Beard Award for best new restaurant, and get a Michelin star.  In fact, Yelp reviewers speak of how you should hire someone from Taskrabbit to wait in line for you if you really want to go but are strapped for time.

Well someone I know was somehow able to snag a reservation.

And luckily for me, something came up and she had to bail on it.

Another thing that was interesting was that many dishes were single "shot" like individual tastings for one person (although my date and I attempted to share them).  Keep that in mind for when you go and order enough so you don't have to share a tiny portion.

A number of other dishes are shareable although shareable for different sized groups.  If it had been 3 or 4 of us, we may have ordered more of the larger shareable dishes.  There was a trout & avocado dip w/ housemade potato chips.  It looked really good, but we decided not to get it only b/c it was just the two of us.

Here are all the dishes we tried during the night in the completely random order in which they arrived. 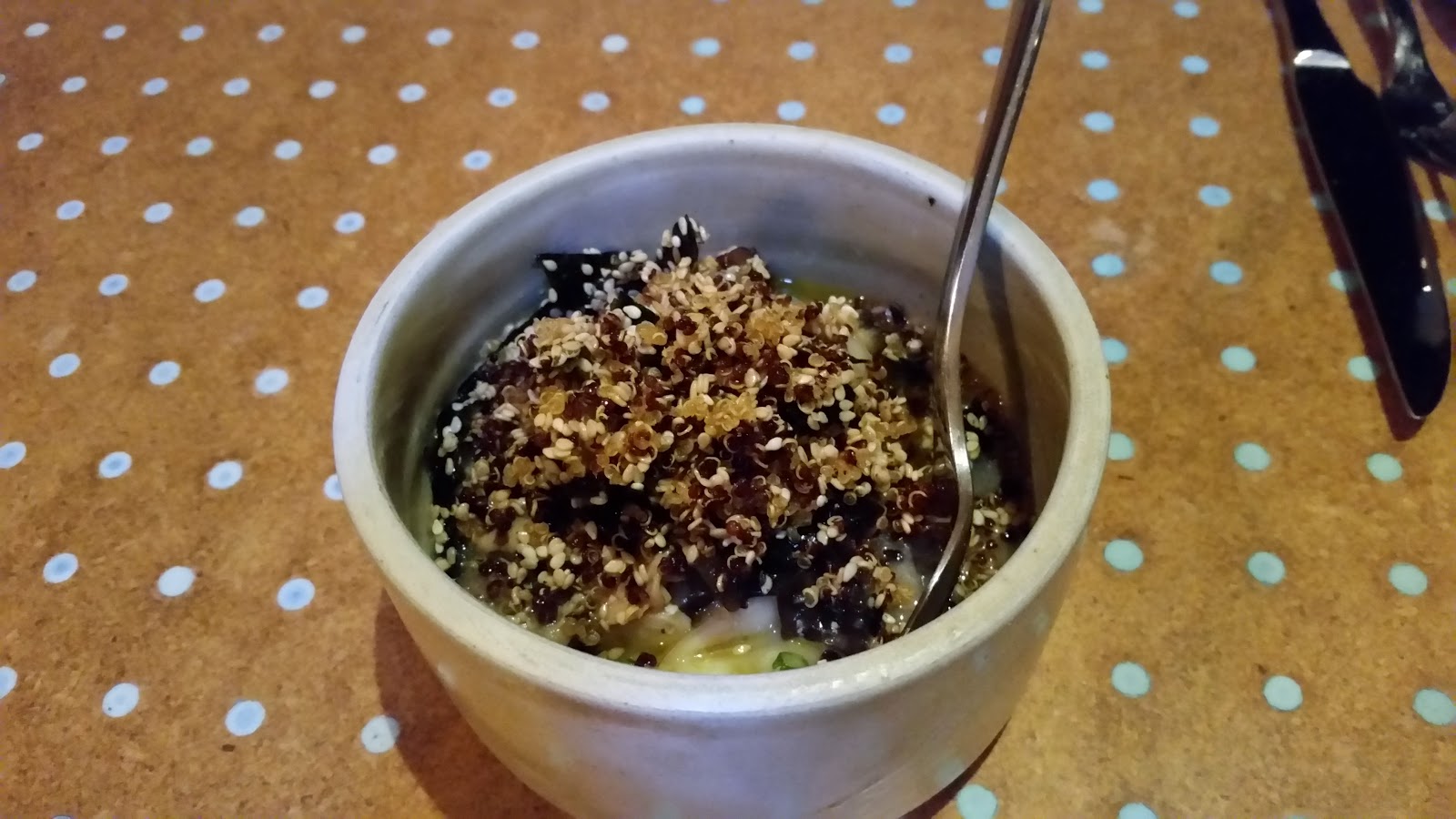 This first dish may have been my least favorite of the night.  It was an interesting mix of flavors and textures.  My date liked the crunch quinoa & sesame on top. 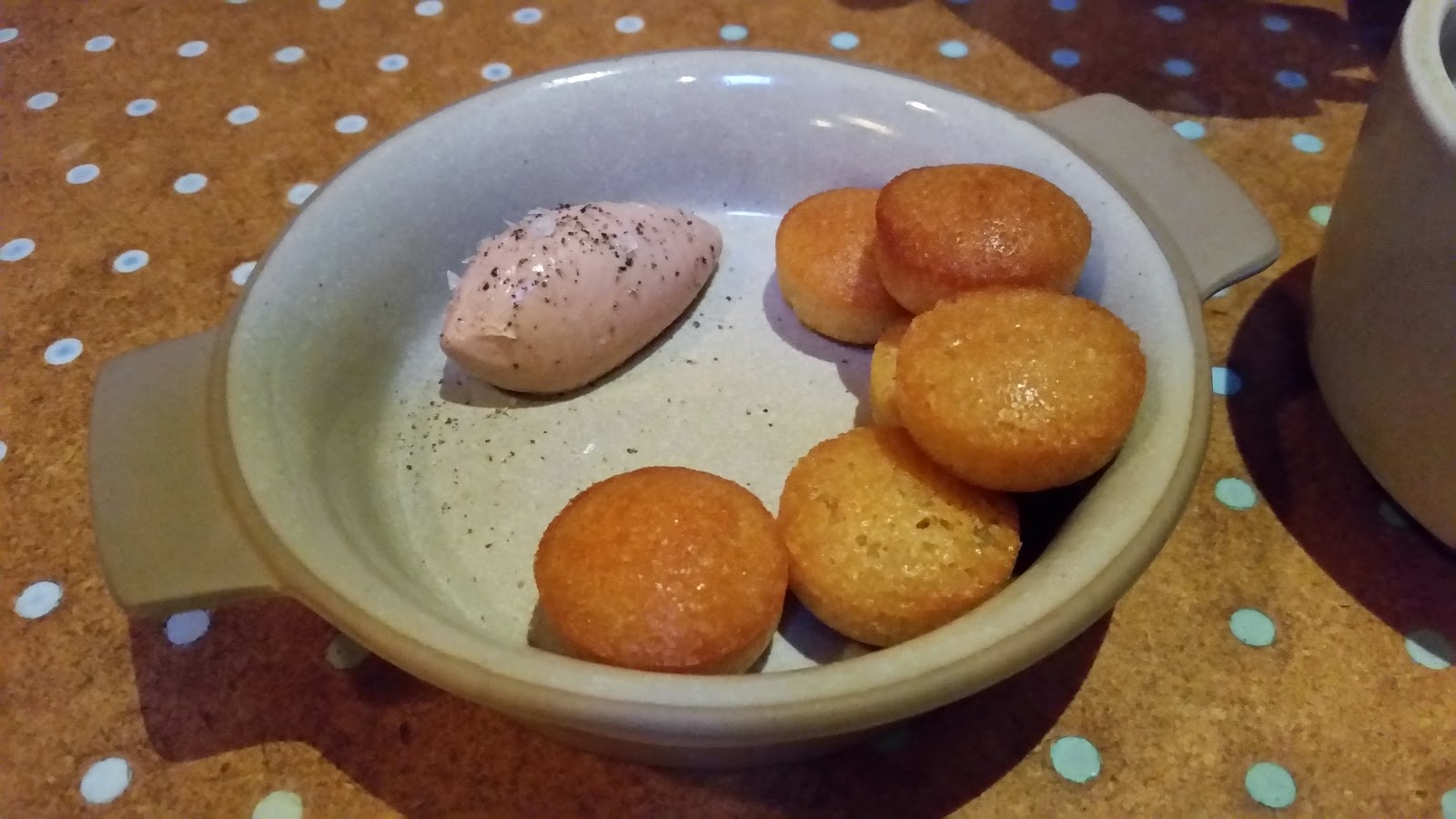 I'm unsure if this duck liver was foie gras, but it tasted similar.  The almond biscuits were ridiculously delicious and stood on their own.  Maybe my favorite dish of the night.

This was ordered off the menu and is reasonably large portion.  I actually had no idea what "heart of palm" was and had to look it up (it's the inside of a palm tree).  It was very light, crunchy, and tasty. 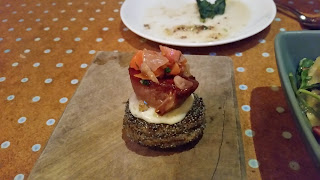 Another item off the menu, we picked it basically because you can't get beef tongue everywhere.  I thought this was good, the beef tongue was really soft, although I would have preferred more meat to carb ratio.  This is the first case where we should have ordered one for each of us, we had no idea how tiny this was when we ordered it.  Shouldn't a pancake be bigger?  I think the waitress did ask us "Only 1?" when we ordered. 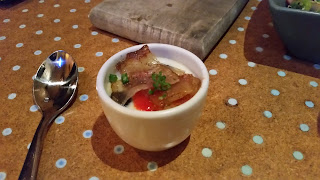 This chawanmushi was delicious.  I thought it was just bacon on top, but it wasn't quite the right flavor.  I had to go online to learn this was "guanciale" and to learn it was basically cured pig cheek.  Really good.  Although I can't recall what the red sauce beneath the guanciale was.  This was again a single person serving, but we got only one. 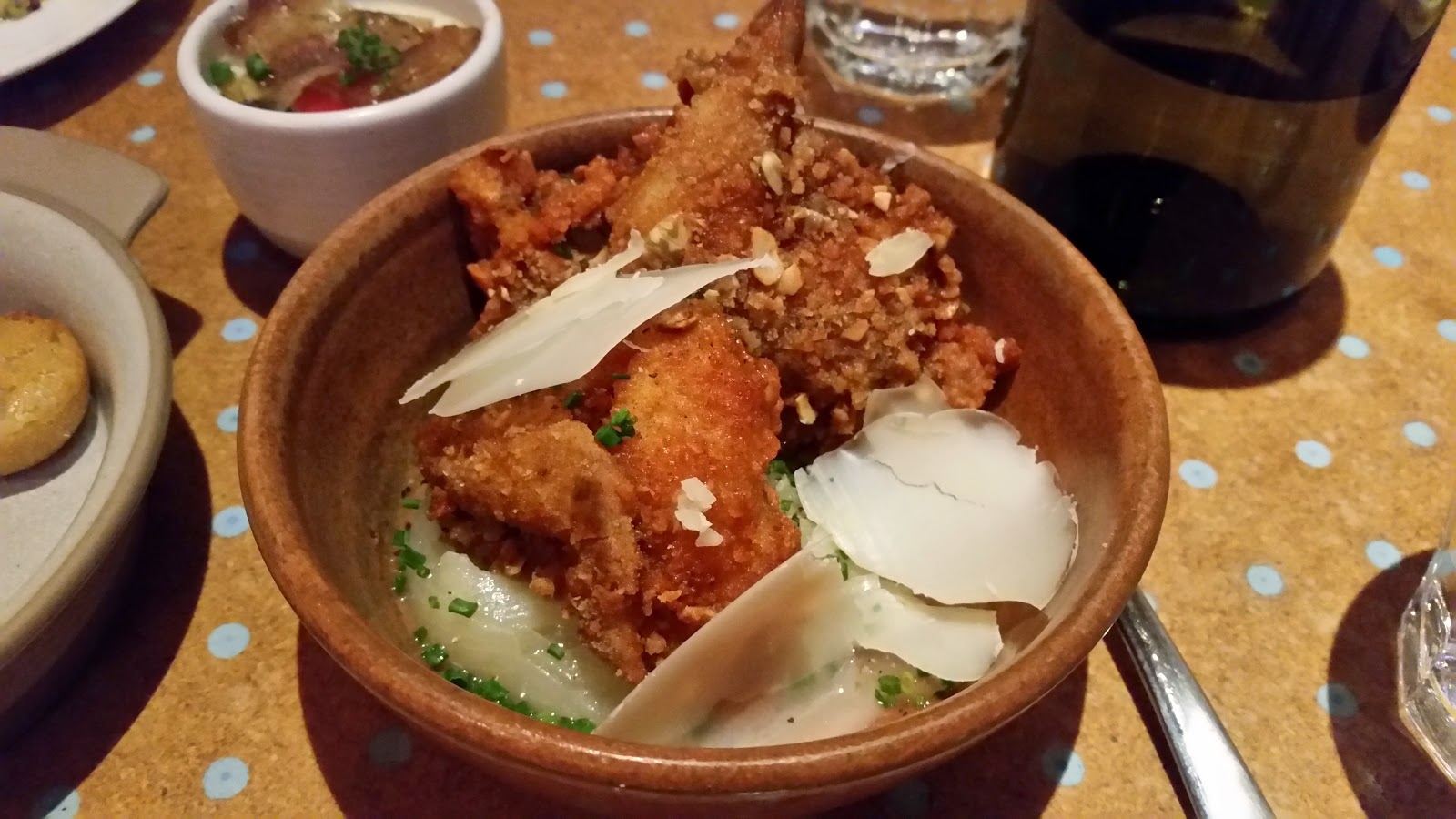 The signature dish from which the restaurant is named.  If you weren't aware what the California state bird is, it's quail.  Apparently this dish (or something really similar) was cooked when the head chefs were at Rubicon (a pretty famous San Francisco restaurant that is now closed).  I am not sure what kind of cheese was on top of this.  Overall, tasty.  You can order this dish with two or four pieces of bird. 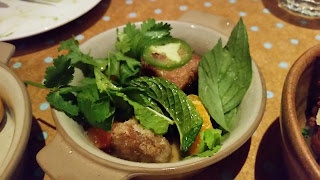 A solid dish.  I liked that it was light.  This was perfect as it had just two pieces of pork belly in it.  There was also a 4 piece version for larger groups. 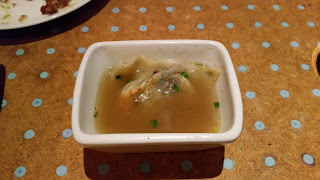 Another example of a single person dish as it contained only one dumpling.  We would have gotten two of these, but the server walking around was down to his last dumpling.  Nothing we could do about it so we had to share.  The dumpling was quite good and probably would have been better if I didn't have to cut it in half.  I didn't know it was guinea hen until looking on the menu afterwards.


I wish we got this earlier in the meal as it was a bit heavier than the last two.  Overall, a good dish, nice combination of flavors.  I wish I knew what the orange stuff was on top (possibly orange, but some citrus).

Then we ordered two desserts 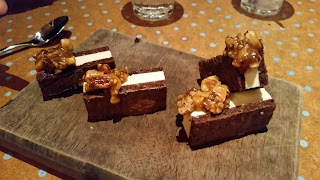 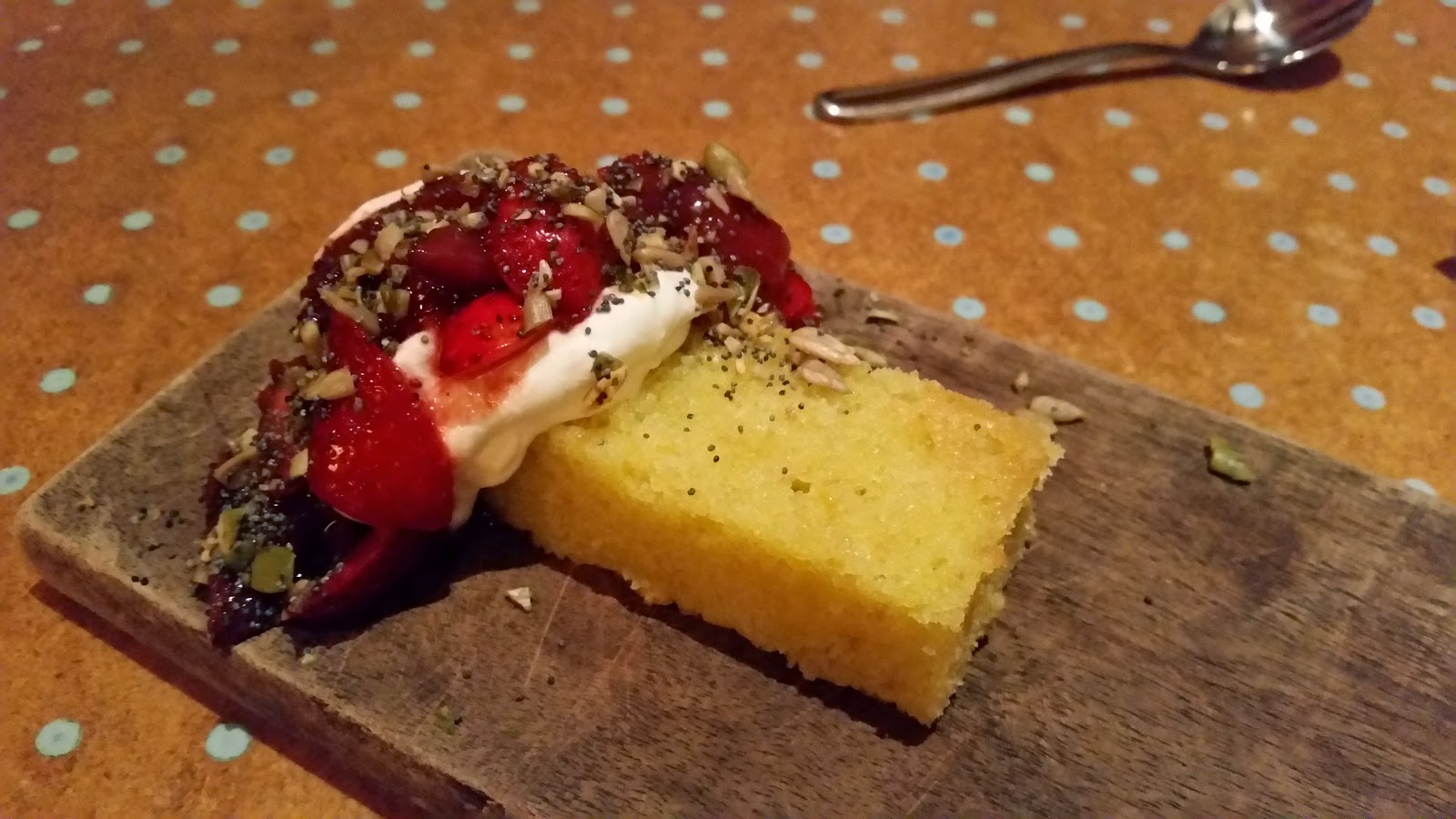 I really enjoyed these last two desserts.  While they didn't necessarily wow me, they had little differences to make them just different than what you would normally get out there.


The "bread" part of the ice cream sandwich was the star of that dish.  It made things just different and peppery to make the dish really interesting.  Similar with the olive oil cake.  If it had been lemon or chiffon cake, it would have been similar to the cake in tons of other restaurants.  But the flavor was just different and unique.

Overall, a good and interesting meal.  After eating at The Progress next door, I learned my lesson and mixed it up with light dishes and heavier dishes to make sure I didn't feel too full and too heavy afterwards.

The question is, did State Bird Provisions meet its insane hype?  For me, it didn't.  However,  its ridiculous reputation perhaps made it impossible to meet the hype.  I would say that it's probably amongst the more interesting restaurants in San Francisco and worth checking out if you can get a reservation.  The American style dim sum is interesting as are many items on the menu.
Posted by Albert Chu at 7:17 AM