So after years of having it as my #1 restaurant to try (my prior #1 was Benu, which I hit up in 2014), I was finally able to hit up Atelier Crenn in San Francisco for my birthday.

Atelier Crenn is one of the most unique restaurants in the area.  There is no menu presented, the chef instead provides a poem in which each line of the poem represents a dish.  It was sort of fun to try and guess what was coming.  For example, "black pearls" in the poem was somewhat obviously going to be caviar, but we were completely wrong guessing what "blue umami" was.  We also were presented with a "menu" of random pictures representing some dessert dishes.

Atelier Crenn has recently got a lot of attention that made me think I wasn't going to dine at this restaurant for awhile.  It recently got ranked as a top 100 restaurant in the world (#83 as of this writing), the head chef Dominique Crenn was named best female chef in the world in 2016.  On top of all that, she was recently featured in an episode of Chef's Table on Netflix.  Perhaps knowing of her celebrity status, she came by to great each guest at their table which was nice.

My girlfriend somehow got me a spot for my birthday.  So here's what we got.  Given the menu is written as a poem and pictures, I'm just going to write the ingredients in the dishes as it was told to us in a printed menu after the meal. 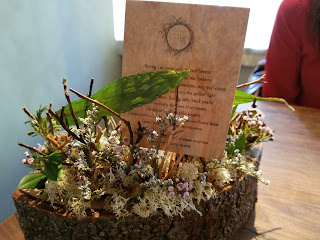 So first up was this presentation with the poem menu.  It also includes the first course which was some dehydrated leaves coated in olive oil (the big green one, not the flowers).  I can't remember what plant it came from.  Overall, interesting.  I suppose this one is mostly for presentation. 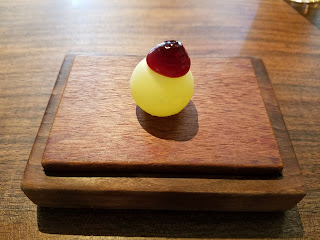 This is apparently a signature dish of the restaurant.  I didn't know this, but kir breton is a drink made with apple cider and creme de cassis.  Apparently creme de cassis is a currant based liqueur.

So clearly this is a reinterpretation.  The apple cider is liquid inside a white chocolate mold and the creme de cassis has been made into a jam of sorts on top.  Overall, an interesting tasty dish with an explosion of apple cider in one bite. 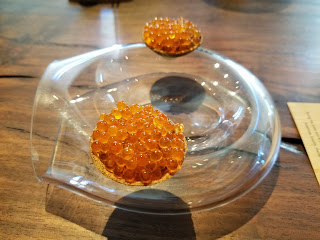 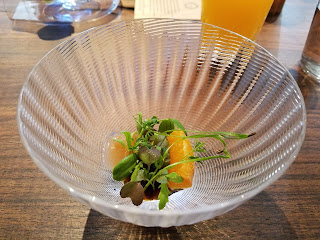 The next course was two things.  The "main" was the crisp with smoked trout roe and some type of black truffle cream/sauce.  Really really good.  One of my favorites in the meal.

The second was a small salad of herbs, multiple types of citrus (including a mandarin slice), something citrus gelatin, and something truffle-ish.  Overall quite tasty.  I was a little surprised by this dish, as it seemed somewhat "normal" given the restaurant's reputation for such whimsical dishes.  But I suppose it served as a palette cleanser of sorts for the next course. 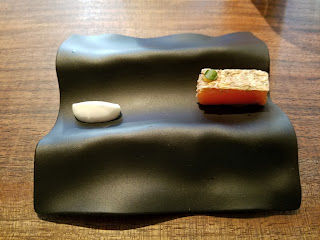 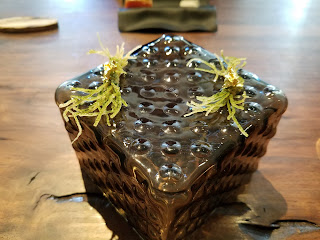 This was a "fish and chips" re-interpretation of sorts.  On the top, was a single byte of trout with a sauce (can't remember, might have just been creme fraiche) On the bottom is a re-interpretation of "chips".  I believe it was some type of potato with seaweed powder on top.  The trout was really really good, it was definitely cured in some manner and the skin gave it a nice crisp texture difference.  I can't remember much about the chips. 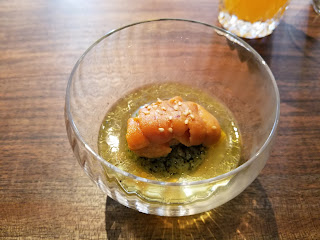 This was a really interesting dish.  Crisp koshihikari rice, uni, in a white wine broth (which I guess is the barigoule).  The broth was delicious.  The rice was on the crispy side, which was interesting as it really contrasted with the uni.  The uni appeared to have been cooked a little bit, so it was a bit softer than I normally think of uni.  In fact, I think it's the first time I've ever had uni cooked (discounting when it's turned into a sauce or something similar).  Overall, the flavors were good but I think the rice was too crispy and too contrasting to the uni. 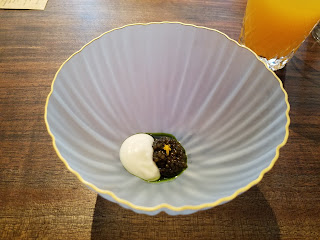 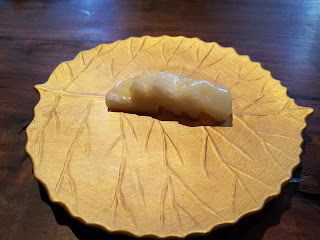 Next up was the caviar course.   I can't remember what sauces were served with the caviar, but one was something seaweed-ish.  Perhaps the other was the "koji".  The daikon was also served as sort of a texture/palette difference between bites of caviar.  Overall, creamy, flavorful, lots of deliciousness. 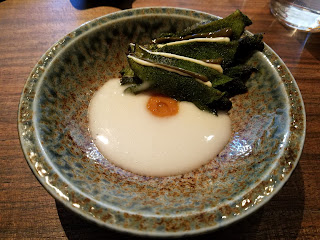 This was probably my favorite course of the night and probably the best abalone I've ever had.  The abalone was soft and not chewy, so I think left a little uncooked.  It was coated in some (I believe) seaweed dust and had some additional sauces on it (can't remember, perhaps it's the "Roasted Garlic").  The main white sauce was an oyster cream and the yellow was something egg related.  Overall, tons of flavors, tons of umami, just delicious. 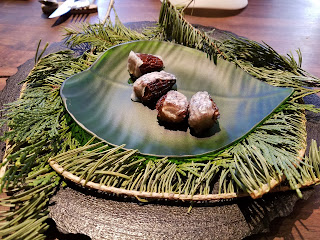 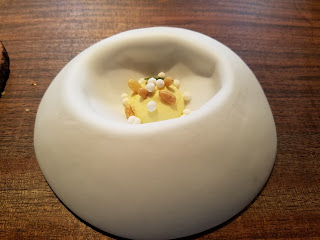 Next up was another duo of dishes.  In the middle was some morrel mushrooms with a bit of parmesan melted on top.  If you've read anything else on my blog, you know I hate mushrooms.  However, morrel mushrooms get a pass because their texture is so far different from your normal/average mushrooms.  And I have to say, these mushrooms were really juicy, flavorful, and delicious.  The staff said they foraged these from the area.

In between bites of mushroom, there was a light parmesan custard with some pine nuts and creme fraiche balls.  Also good, although the morrels were better. 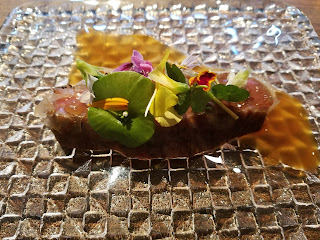 My girlfriend's first thought when she saw this dish is it reminded her of the eggplant dish we had at Narisawa.  Both in the presentation with foraged flowers and an agar sheet on top (the "carrot veil", which may be hard to see unless you zoom in).  Some chicken jus was plated at the table.

My first thought was that this chunk of wagyu was way bigger than what I normally get at Michelin star restaurants.  It was certainly more than Oriole or Californios, probably twice as much if not a little more than that.

Overall, this was delicious.  Perhaps the best wagyu I've ever had.  It had a bit more "firmness" than other A-5 wagyu I've had.  I'm not sure if it's due to it being a different cut from the cow or if it's simply the thickness of this cut.  Sometimes wagyu can be so fatty and soft that it almost doesn't feel like you're eating meat.  So that little bit of extra firmness really made this great. 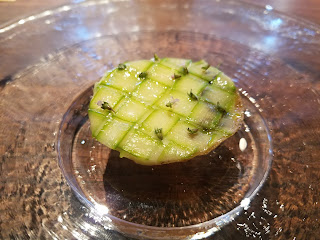 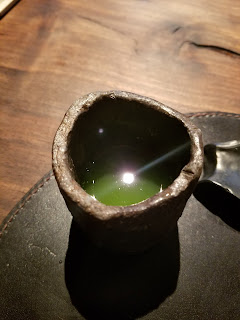 Before all the desserts came out we got this palette cleanser drink.  I remember it contained atleast three juices, of which the only two I remember were cucumber and cactus.  Overall, refreshing and tasty. 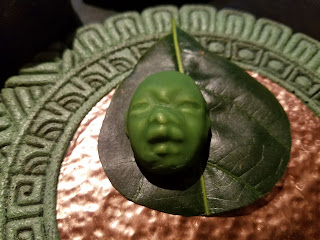 This was the surprise of the night.  It's a single byte chocolate with a liquid in it.  It's a combination of avocado and chocolate, which I would not have thought would go well together, but it really did.  Add in the molded face in the chocolate, and it's definitely the most interesting and delicious dessert (and perhaps course) of the night. 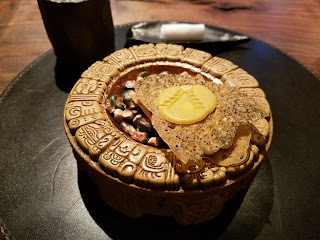 An interesting dessert that was corn themed.  A chocolate on top, some corn chips, and corn-marshmallow in the middle.  Tasty and interesting, corn for dessert is not the first thing you think about and it took some time to process after the first bite. 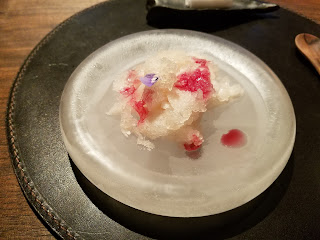 So this was another really interesting dish, it's the "fruit" part of a cacao plant.  We're of course used to eating the beans of cacao plants for chocolate.  I wasn't even aware the rest of the plant was even edible.  Apparently it was frozen and then lightly shaved to give it a "shaved ice" kind of texture.  Some hibiscus tea was poured on top.  The first few bytes of this dish reminded me of lychee flavor.  It's not exactly the same, but there were similar hints of the flavor.  Overall, a really interesting and tasty dessert dish. 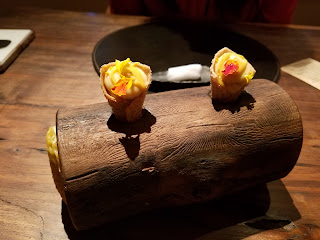 This dessert was honey themed.  I've never had sapote before so no real comments on the flavor.  Overall, I recall the flavor as more mild than other desserts. 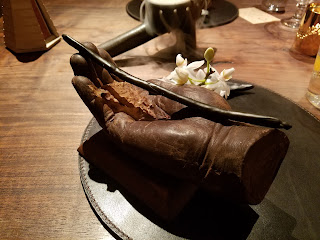 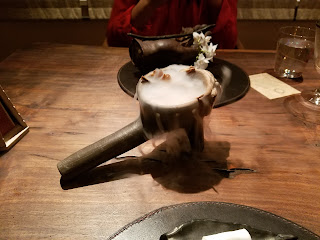 Next up was this fake vanilla bean with guanabana fruit liquid/cream in the middle of chocolate.  I'd never had guanabana before, but it was really tangy.  Very good.  The crystallized tobacoo leaf was interesting, as I don't think I've ever had tobacco leaf before.  In the middle of the table, some liquid nitrogen was poured into a dish with vanilla to give the essence of vanilla in the presentation. 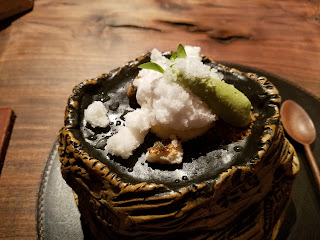 Finally we had this agave & coconut flavored dessert.  I think the green on the right was meant to recreate an agave plant and the white mound on the middle was coconut flavored cake of sorts.  The iced Sotol (I think basically tequilla) was put on top.  Overall, I liked the coconut flavored part of the dessert the most, not sure if the icey sotol added much.

Now that we're done with the desserts, I think I'll mention that I really like how they are so different.  We have a drink, chocolate liquidy thing, a crispy tortilla thing, an shaved-ice thing, an ice cream thing, whatever the vanilla bean counts as, and this cake-like thing (which is perhaps the most normal of the six).  So many different textures and flavors and ways to do desserts makes it all really fun and interesting and might be the best dessert experience I've had in my Michelin star dining experiences. 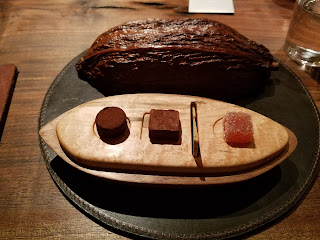 Can't remember everything but the two on the left were chocolate, then a peanut-ish crisp, and peach pate de fruit.  I really liked the peanut crisp.  I actually dislike peanuts as a flavor in general, but this one was lighter in flavor and very light. 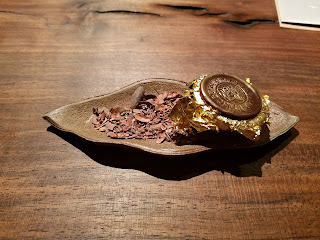 This isn't on the menu, the staff brought this out as an extra for my birthday.  It's a "spanish coin" ice cream sandwich of sorts, with more gold leaf than any other dish I think I've ever had before. Overall good, but can't remember much as we were getting towards the end of the meal. 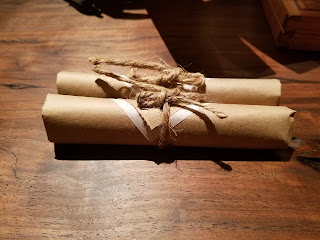 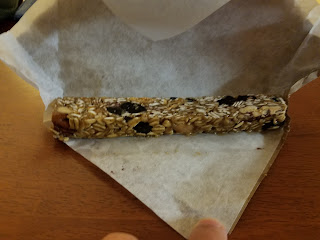 This was a granola bar to go.  Ate it for breakfast the next day.  Definitely better than the Nature's Valley junk I normally eat.  There were raisins, almonds, and a ton of honey.

Overall the meal took about 2.5 hours.  Unlike some other restaurants, I left satisfyingly full.  To be honest, we were quite full after the main courses and were a tad worried about dessert over-stuffing us.  However, the desserts were mostly "small" items except the last one, so we didn't feel like we were getting overly stuffed at any point.

Overall, Atelier Crenn definitely met its hype.  A ton of interesting and delicious dishes all around.  I'm debating where I put this meal in my overall rankings, but it's definitely in the top 3 meals I've ever had.  I'm still debating in my head how it ranks against Benu and Narisawa.
Posted by Albert Chu at 4:25 PM