The last time I was in Chicago I stopped in at Blackbird.  I was lucky enough to snag the reservations sort of last minute.  This time I actually had time to plan for the trip so I looked into restaurants way earlier.  I wanted to hit up the famed Alinea, but tickets were sold out by the time I checked (2 months before my trip!).  So I had to hunt for another place.

I looked into Grace but that place is hard to get into as well.  I looked into Goosefoot and Elizabeth, but they were bit farther away in the North side of Chicago.  El Ideas was closer, but I thought the restaurant might be a bit too quirky for my co-diners who aren't quite the foodies I am.

After some random searching and I came upon Oriole.  It's a relatively new restaurant that was run by the chef from Senza, a 1 Michelin star restaurant that closed in late 2014.   Oriole got an amazing 4/4 stars from the Chicago Tribune.  It's only the 6th time the Tribune has given a restaurant a 4/4 as its initial review.  The other restaurants given initial 4/4 were all run by eventual 2 or 3 Michelin Star chefs.  So it's very high praise for Oriole.  Sure enough, a few months after that stellar review, Oriole debuted at 2 Michelin Stars.

Luckily for me I was able to snag a reservation for 4 while I was in town.  Here's an overview of the meal we had.  One interesting note is that the restaurant did not present a menu to you before the tasting, as they wanted the dishes brought out to you to be a surprise.  It's the first time I've ever had a restaurant do that.  So all the official dish descriptions listed below were determined after the tasting.  It does affect how you view the meal and interpret the dishes without knowing them ahead of time. 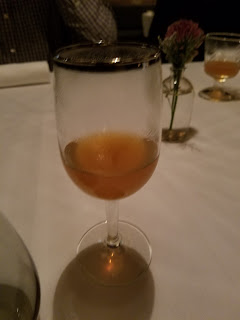 When we arrived we were given some hot apple cider.  I'm not sure if this is a regular thing at Oriole or not (if it is, perhaps they substitute other cooler drinks during the summer), but given it was a really chilly night, the hot apple cider was really nice and welcome. 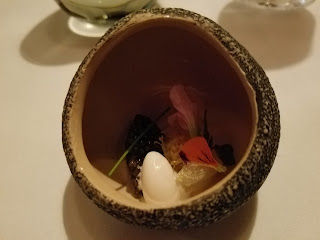 Nothing too much to mention about this dish, a tasty start with some interesting mixtures of flavors. 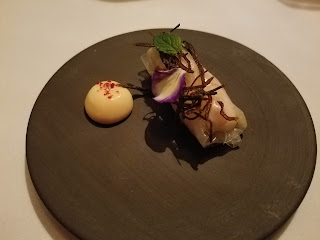 Overall, very tasty.  I had to lookup what calamansi is, and it's apparently a hybrid citrus/kumquat fruit.   I guess it was the primary component of the sauce.  The "sweet and sour" of the sauce was a little on the strong side, perhaps drowning out the relatively tiny spring roll a bit. I actually had never had langoustine before so I tried some of it by itself and it had a flavor that certainly reminds you for shrimp/lobster, but had a distinctive taste. 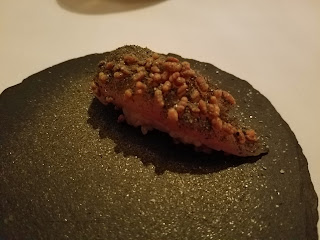 This was a great piece of nigiri.  I believe the rice was a bit more vinegared than other sushi rice I recall having, but the kampachi and yuzu kosho was really flavorful overall and very tasty.  The genmai (brown rice) was added on top for texture.  It gave a nice texture contrast, but I think the dish would have been delicious even without it. 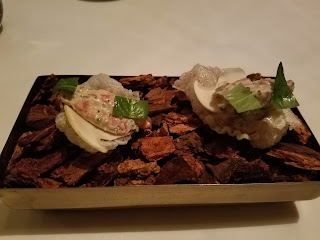 The first thing I thought of was to compare to the puffed tendons that I had at Alta CA.  The flavor wasn't quite as strong, as I suspect it wasn't salted like the one at Alta.  That's not to be surprising as the wagyu tartare was to be the highlight.  Overall, quite tasty, although I did wish I got what flavors they had used to mix together with the wagyu tartare. 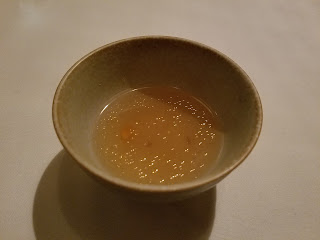 This dish was served at the same time as the dish above, as we were told to enjoy the broth in between bites.  Overall, really tasty and delicious broth.  Wish I could have had a huge bowl of it. 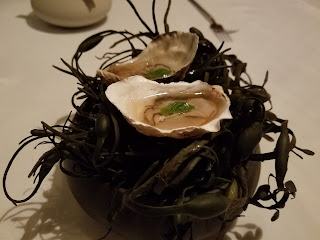 This was an interesting flavor combination I haven't had before.  The consumme really muted the typical strong taste of the raw oyster, making the flavor more subtle. 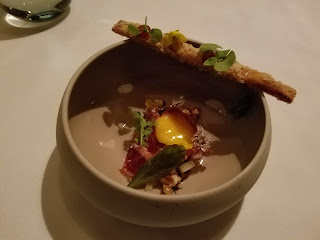 I've never had iberico ham before, so I didn't know what to expect.  The flavor was definitely different than most other hams and not as intense as I had expected.  I had to lookup campo de montalban, which is apparently a type of cheese.  Overall, an interesting combinations of flavor but hard to give a verdict as I'm unfamiliar with the main ingredient.

On top of the dish was an almond crisp with some jam, which I cannot recall.  This had a very strong flavor and was quite tasty. 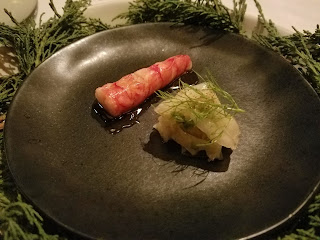 This was one of the best dishes in the meal.  This plate was surrounded by toasted (IIRC) juniper and plated with a sauce that I unfortunately can't recall.  Cardinal prawn is apparently a deep sea salt water prawn, so you get the great flavor that comes with salt water prawns instead of the freshwater ones.  I don't know how Oriole cooked this, perhaps it was done via sous vide it so it was "medium rare" in the middle, but this prawn was really tender in the middle and had a melt in your mouth quality.  I don't recall having prawn like this before, overall it was really good. 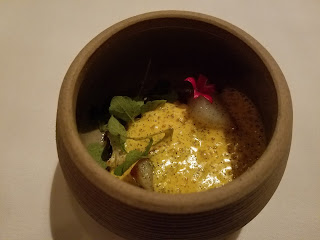 This was probably my favorite dish of the night, it was an explosion of umami and flavor with chunks of scallop and cauliflower underneath the sea urchin emulsion.  I had to look up what anise hyssop was, it's in the mint family of herbs.  After eating this, I wondered if the sea urchin emulsion could have been poured over pasta, it's just that good. 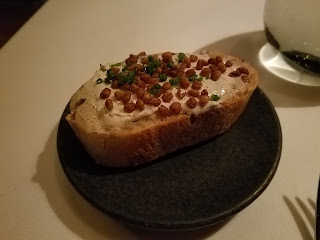 Overall really tasty, although I think there was too much butter on the bread for my particular taste. 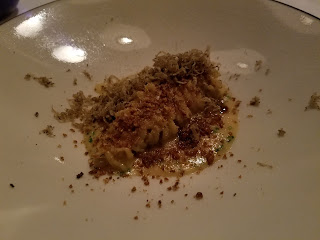 I'm not a huge fan of truffle, as I consider the flavor a bit too earthy for my tastes.  However, I really enjoyed this dish, as instead of raining truffles on top of the pasta only a small shaving was put on top.  So instead of getting all of that truffle flavor, you only get a hint of it in each bite.  One of the servers I spoke to said he agreed that raining too much truffle on top can make it too intense. 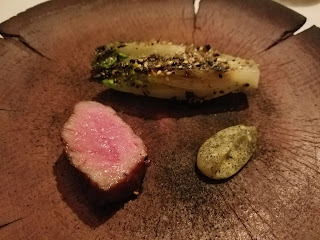 I don't know what needs to be said about A5 wagyu other than it's delicious.  I actually don't recall what the sauce flavoring on the right was.  Perhaps it was the sesame leaf.  The charred little gem of lettuce had a bit of a pickling/vinegar-ish taste to it that I thought was tasty and interesting. 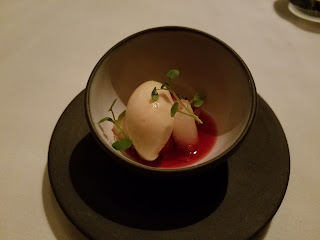 Just like when I went to Blackbird, Oriole surprised me with an interesting sorbet flavor.  Overall, quite tasty along with all the other flavors. 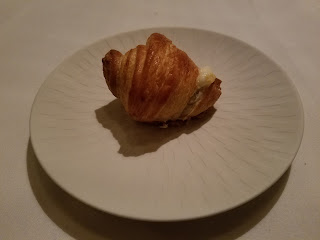 This came straight out of the oven warm and hot.  Overall, rich and creamy and tasty. 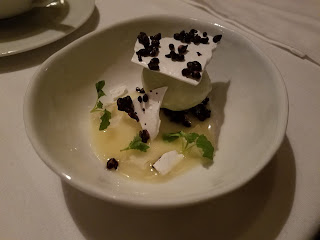 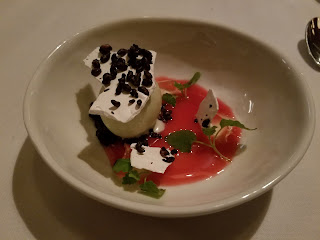 I wasn't exactly sure what "pineapple curd" was, but it appears to be a combination of a fruit, egg yolks, and sugar to produce a creamy spread.  As you can see in the picture there were also some wafers and (probaby not noticeable) some gelatin chunks for additional texture differences (although I couldn't figure out the gelatin flavor).  Overall, I really enjoyed this dessert, a lot of great flavors and textures throughout.

Because I'm a bit allergic to pineapple, the restaurant substituted pomegranate curd instead in the bottom picture.  I have a feeling I might have been the first one in this restaurant to have a pineapple allergy, as one of the servers asked me how the dish was.  She mentioned that several of the staff saw the dish and were "oh wow, look at that". 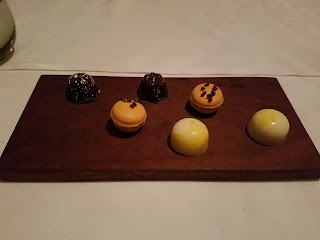 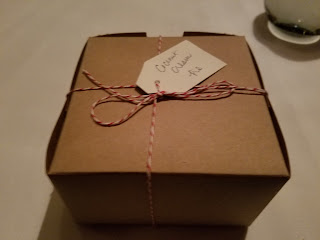 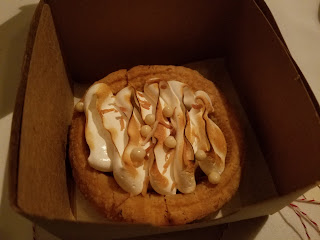 Off menu, we were each given this box with a coconut cream pie togo.  I'm not a big fan of coconut, but the pie was delicious.

Overall the meal was a little over 2 hours, perhaps about a 2 hour and 15 minute affair.  Compared to other meals, I did leave the restaurant a tad on the not-full side.  It wasn't as bad as Sons & Daughters or Commis, but an extra bread course would have been nice or some fillers at the end (a la French Laundry) to stuff yourself.  Perhaps the coconut cream pie could have been served along the mignardise as an extra filler.

One other thing I'd like to highlight for the restaurant.  My co-diners were worried about their meter running out and wanted to head outside to add more money into the meter, but the restaurant said they would take care of it for them at no cost, which was really nice.
Posted by Albert Chu at 10:39 PM