I had a chance to eat at Keiko à Nob Hill recently.  The restaurant has been on my list to try for quite some time when I saw it on the Michelin starred restaurant list for the San Francisco bay area.  For some reason, the menu with its mix of French and Japanese flavors appealed to me.

The restaurant is a little interesting.  There is a single 12 course tasting menu only and there is only one seating an evening.  Every table gets served the same course at the same time (+/- a few minutes as the servers come in with them to tables).  I'm not sure what happens if you show up really late. 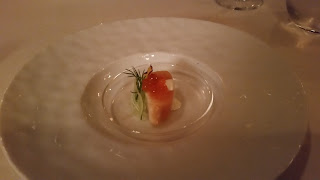 Before the picture above was taken, this dish came incased in a glass dome filled with smoke, so there was a definite smokiness to this salmon.  Overall, quite good. 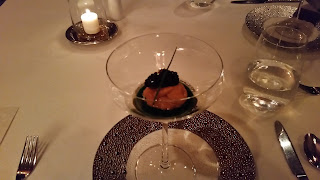 My girlfriend said this was the single most delicious thing she'd eaten at any of the places we've been.  I wouldn't go quite that far with that assessment, but it was quite delicious, with a lot of different flavors going on.  It's a little hard to see all the layers in this dish in this picture, but you can hopefully see it a bit in the picture below. 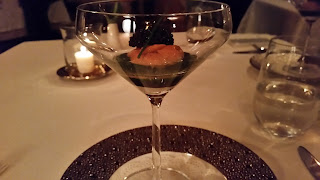 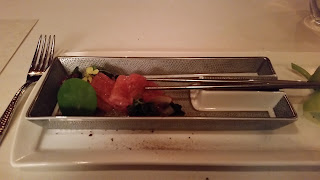 Next up was some sashimi.  Apparently this is amongst the best bluefin you can get in Japan.  It was paired with some seaweed and some other accompaniments that I can't remember.  The coolest part of this dish was they grated dehydrated soy sauce over the blue fin right before serving, so no soy sauce to dip. Very good. 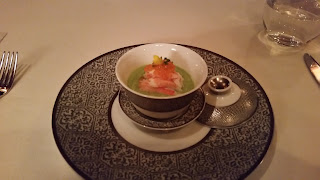 I thought an avocado soup with crab was an interesting combination.  Overall pretty good. 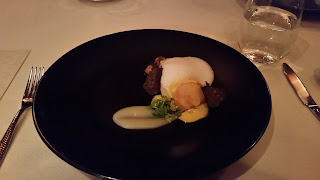 Probably my least favorite dish of the night, I think there was too much going on in this dish.  It's hard to tell in the picture, but underneath the parmesan foam was some slices of scallop intermixed with slices of potato, potato puree, and mushrooms.  The scallops themselves were good, but I guess with the texture of potatoes I don't think it worked out.  The curry sauces were quite tasty. 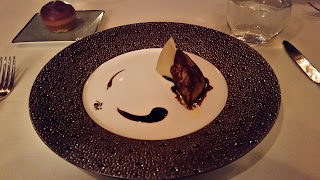 We were told that this was the chef's specialty.  I've only had pan seared foie gras once in my life, and I felt it was just a bit too soft & fatty for my taste.  While good, this was the same feeling as before. I loved the brioche to soak up all of the espresso sauce though. 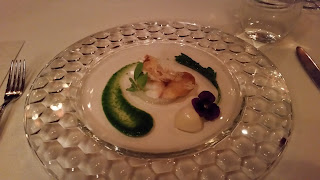 This course was pretty awesome, one of the reasons I love to go to fine dining establishments.  The fish is in the snapper family and is apparently one of the few fish where the scales are thin enough that they can be eaten.  So the fish is lightly fried and the scales give it this crispiness when eating the fish.  Really good. 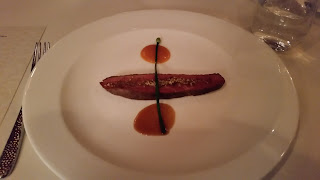 This duck was amazing.  Probably my favorite course of the night and much better than the duck from La Folie.  It was cooked medium-ish whereas the duck from La Folie was cooked rare-ish, so it was probably just more to my liking.  The wine reduction sauce at the bottom of the picture was amazing.  The apricot sauce at the top was also good, but not my preferred amongst the two.

You can see the dukkah spice mixed into the middle of the duck.  I had to look up what dukkah spice is, which is apparently a middle eastern spice typically including sesame, cumin, coriander, and maybe a few other things.  I don't recall ever having it before, but it gave the duck that little extra kick. 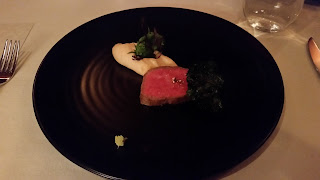 This wagyu was good.  The soy-yuzu foam was a good addition, although the steak was so good I ate a number of bites plain or with just the wasabi (you can see the green mound of it in the bottom).  I felt this wagyu wasn't quite as fatty as the one from Alexander's Steakhouse, so I'm not sure what cut it was.  This isn't a criticism, as the Alexander's steak was so rich I'm not sure how much of it I could have eaten.  This was a steak I could have eaten much more of. 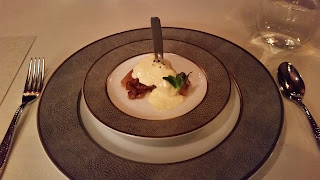 Any interesting cheese course, underneath the triple cream cheese was an apple tart.  The cheese was really rich, reminding us of the cheese course from Ad Hoc.  I was able to finish all of it, but my +1 couldn't quite finish the really rich cheese. 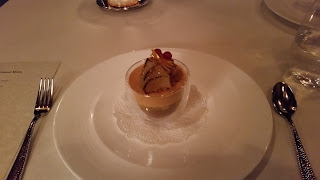 I was a little disappointed we didn't get one of the fruit parfaits I saw on Yelp, but this was quite good with a lot of different flavors going on.  Overall really good.  I'm used to parfaits with some crunch somewhere in it.  If they would have added a bit of crunch somewhere in this parfait, perhaps cookie crumbles or something similar, it would have been even better. 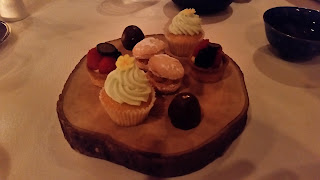 When the mignardise course came out, my immediate thought was that this was the largest mignardise I could recall ever getting.  Definitely more than La Folie, Sons and Daughters, and Commis.  In the above there was a chocolate truffle, a macaron, fruit tart, and a mini-cupcake.  The chocolate truffle was probably the most normal sized mignardise, and you can see the macaron and fruit tart are bigger.  Then the mini-cupcake towers over the rest.  All of them were delicious.  Keiko offered to box these up if you were stuffed, which my +1 and many other guests nearby also did.

While I wasn't crazy stuffed, I was quite full by the end of the meal.  I was a little surprised as Keiko doesn't offer any bread service (discounting the small brioche with the foie gras course).  Normally at a lot of other restaurants you need some bread to fill up with.  But here you didn't.  This isn't a criticism, it's actually a good thing that they don't fill you up on bread.  Virtually every course before dessert involved a protein, a reasonably high priced one at that, so it makes this dining experience a pretty good value compared to many other nice tasting menus in the bay area.

The meal took just about 3 hours total, so those who might be worried about the food quantity shouldn't have to worry too much.  I will mention that the middle portion of dishes of foie gras, duck and wagyu can get a bit heavy, so you may be a tad full once you eat all of that red meat (but this shouldn't be considered unusual in any way, the same thing happened to me at French Laundry after eating the pork & lamb).  My girlfriend was particularly full after the duck course and I had to eat some of her Wagyu for her (poor me).

Overall a delicious meal.  One tiny nit with the restaurant is that they don't really have any non-alcoholic drink options.  They really concentrate on wine pairings.  I don't imagine this will bother most.