A couple of years ago I was able to hit up Mourad for a friend's birthday.  I was able to dine there recently for another birthday, this time for 6 people.  So we ended up ordering a lot more food than last time.

One of the coolest things they have at Mourad is a family style meal called "la'acha".  Basically, it's a large family style protein served with sides.  For 6 people we ordered two of them with a bunch of appetizers to share.  It ended up being way more food than we could eat.  This is an overview of what we had. 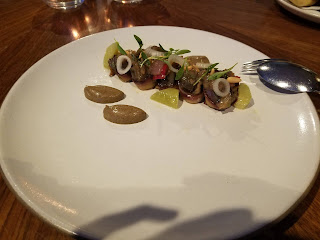 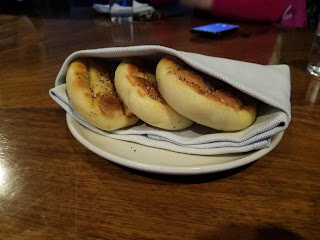 We ordered two of these appetizers for the group.  The flatbread was particularly delicious, which I used the soak up all of the pureed eggplant from the main dish at the top. 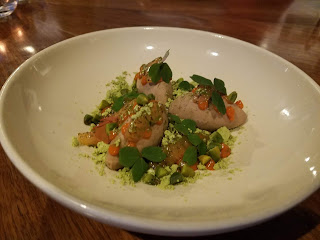 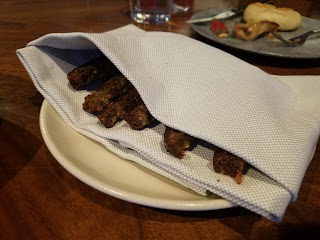 We got just one duck liver appetizer, which was perfect for 6 people, as each person could get about 1/2 of a scoop of duck liver on a piece of bread.  Overall, quite good, although I felt the liver overpowered some of the other ingredients. 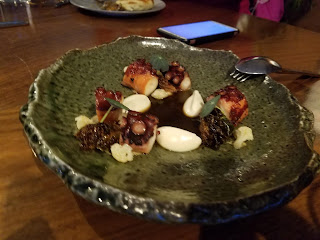 We ordered two of this appetizer for the group as well.  I didn't catch what the server said about this dish, but I believe the sauce in the middle was a mushroom ju and the white sauce is a cauliflower puree of some sort.  The octopus was incredibly tender and flavorful.  Along with all of the sauces and the perfectly charred brussel sprouts, my favorite appetizer of the night. 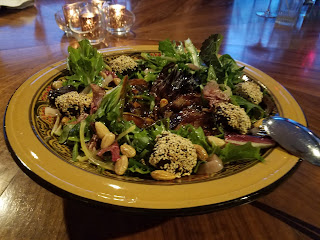 The first la'acha main dish we got was the lamb shoulder, which you can see in the middle nestled on some seasonal greens.  You can also see almonds and the moyer prunes (covered in sesames) nestled on top too.  It's hard to see how much food there is since a lot of it is covered it, but it was a sizable portion for 6 people and probably would have been perfect for 4 people.

The lamb was really tender and not to "lamby" compared to the lamb I normally cook up from Costco.  Overall really good. 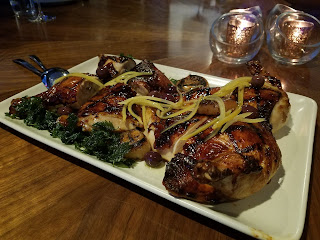 The second la'ache main we ordered was the chicken.  Normally, I'm not a big fan of white meat on chicken.  It's typially dry and (IMO) just not that tasty.

I took one for the team and grabbed some chicken breast so that everyone else get get more dark meat.  It's probably the best chicken breast I've ever eaten in my life.  It was juicy, not dry in any way, and just delicious with whatever glaze they put on top.  When I told everyone at the table how good the chicken was, they didn't believe me at first.  In fact, I might have preferred the white meat to the dark meat in this case.

It's worth noting at this point that there was no way the 6 of us were going to finish these two la'achas.  Each was probably the perfect size for 4 people, and with the appetizers, we had left overs. 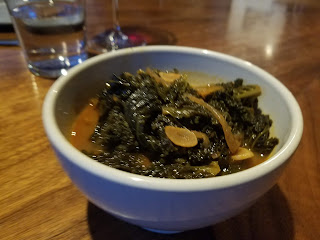 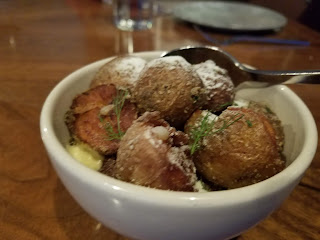 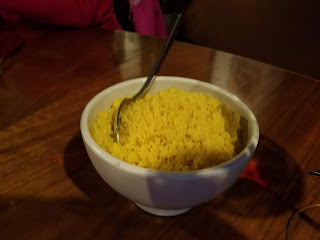 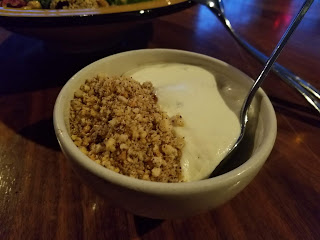 The la'acha comes with the 4 sides above.  I will repeat a comment my friend told me from the last time I ate here.  The sides are all relatively plain ingredients, but all the little additions (hollandaise on the potatoes, preserved lemon the kale, feta on the beans, etc.) everything is just a little tastier than you would expect.  Of all of the above, my favorite was the potatoes. 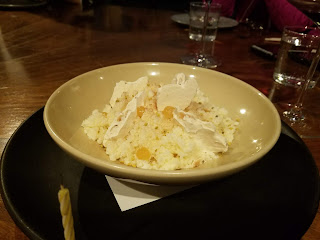 We were completely stuffed after ordering too much food.  Since it was a birthday dinner, we got one dessert for everyone to share and take a bite of.  The waiter recommended this dish.  As far as I can tell, it's a honey flavored ice cream-ish thing (searching online it might be sabayon), with almond granita, and some crispy bits on top.  Overall, I loved the flavors in this dish, really good. 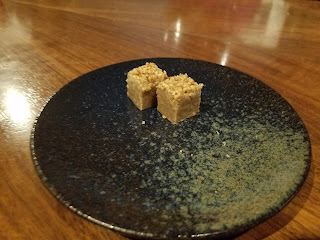 Finally we got some mignardise (I took the picture after many pieces were yoinked), which was some sesame fudge bites.  After biting into it, it immediately reminded me of several Chinese flavored desserts that have sesame flavor.  Overall, really really good.

Overall, a great meal at Mourad.  I can't recommend it enough.  The price is not too exorbitant given the quality of the food that you're getting, especially when getting the la'acha family meals.
Posted by Albert Chu at 10:12 PM