My girlfriend and I needed someplace to eat Saturday night and saw that Aster had a spot open.  It's a relatively casual restaurant that got a Michelin star last year.  While we were there, we were perusing the restaurant's website and saw that the head chef's resume was very impressive.  He was the sous chef at Rubicon (precursor to State Bird Provisions), then was sous chef at Coi, and then later chef de cuisine at Saison.  Quite impressive.

The restaurant is quite casual as far as Michelin stars go.  There are both private tables for 2-4 people and there's a large communal table in the center of the restaurant.  So as an FYI there's a chance you'll be seated with strangers, especially if you're a walk in.  We got a table off to the side for just two, which is what I'd personally prefer.

The menu is divided into four sections, cold dishes, warm dishes, entree dishes, and desserts.  You can order dishes a la carte, but they offer a four-course selection (1 from each section) for $59 dollars.  Bread is extra for $5 if you want it.  We both went with the four-course menu, each ordering four different items. 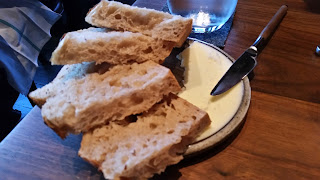 First up, the bread.  I really liked this bread.  It wasn't a tough/hard that a lot of sourdough breads can be.  It was definitely a bit more sour than most sourdoughs I have but not too sour.

On to the cold dishes we got. 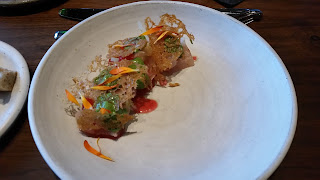 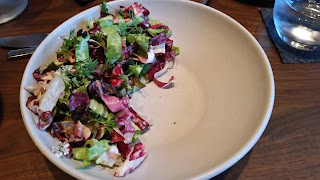 My first course was the smoked albacore on top.  I assume the sourdough was the crunchy carb-like things on top, the blood orange was the reddish sauce on the bottom, and the fennel was the greenish sauce on top.  Overall, quite tasty with some contrasting textures.

The chicories salad was my +1's first course, which as far as I could tell was a normal looking salad.  I can't really comment b/c I only took one bite.  I think I only forked 1-2 leafy greens and didn't get any of the other flavors in there, so can't say much about this dish. 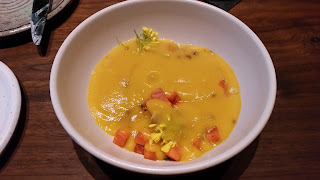 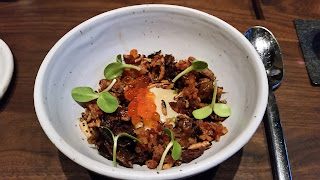 I got the squash soup above, which was very hearty and delicious.  I wish I took a "before" picture before the soup was poured on, because there were a healthy dose of persimmons and crunchy grain-like things in it, which I assume were the pepita (had to look it up, it's pumpkin seed) and marrow.  Overall, contrasting textures and lots of flavors.  I really liked this dish.

My +1 got the soft cooked egg.  I think the waiter said there was puffed rice in here too, but I could be mis-remembering.  The waiter recommended breaking up the egg and using it as a sauce for the rest of the ingredients.  I grabbed one bite of this and thought it was delicious.  Lots of crunchiness and flavor along with the egg.  I'm probably going to grab this course next time.

Now onto the entrees. 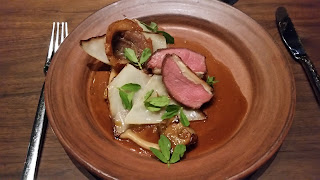 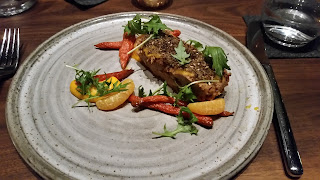 I had the lamb above, which was served three ways.  Two chops which can be easily seen, a roulade of some part of the lamb which is that spiral-ish looking thing at the top, and some "ragu" of lamb which was at the bottom and can't be seen.  There was a quince sauce on the bottom, some cabbage, and some chunks of quince.  Overall, a good dish.  I especially liked the quince.

My +1 had the pork shoulder, which I would describe more like a pulled pork shoulder and then re-shaped into that block of meat you see above.  Not criticizing, it's fine that way.  The sauce was apparently some yuzu+carrot sauce and the carrots above were pickled.  I tried one bite of pork and sauce and thought it was quite good.  However, I don't know if I'd get this if I went back.  It's a pretty sizable amount of pork and there's not much besides it.  I'd definitely recommend the lamb as you'll get three different preparations of it so it's a bit mixed up.

And finally the desserts 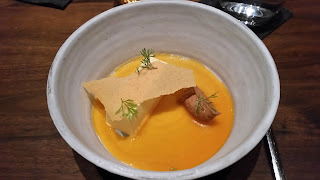 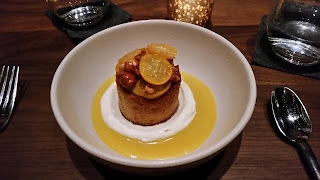 I got the pumpkin parfait, which I guess was sort of deconstructed because it doesn't look anything like a parfait (lets say compared to the one I got at Keiko a Nob Hill).  However, it was quite delicious.  The main "ice cream"-ish part on the left was quite light and not too savory.  Along with the crunch stuff on top, the sauce, and the pecan puree to the right, overall delicious.

My +1 got the gateau on the bottom, which I had to ask what that was.  It's a cake of sorts.  I had to look up bavarois, which is a cream.  Tried one bite and was quite tasty.  I could maybe get this next time I go.

Overall a good meal.  The meal took about 1.5 hours from being seated to finishing the dessert.  It's a fair amount of food for 1.5 hours and I was quite full at the end, although not crazy stuffed.