My girlfriend and I were going to be in the Mission and decided to hit up  Aster again.  Compared to many of the Michelin Star type restaurants out there, it's quite affordable and we found the dishes interesting and tasty.  While earlier in the year they charged $59 for four courses, it's now up to $65 for four courses and an extra $5 for bread.  Still, it's very affordable compared to many other restaurants.
I'll leave details of the restaurant to the prior post, but here's an overview of the meal we had on this second trip. 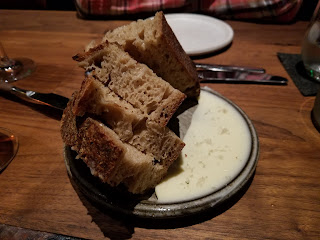 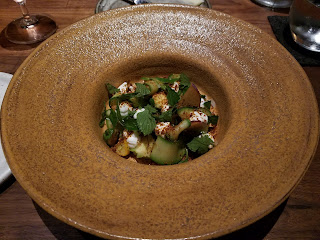 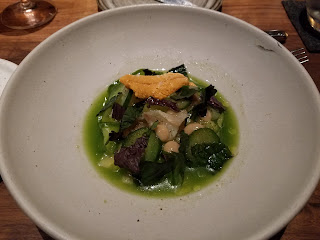 For my first course I had the squash salad in the top picture.  Overall, a light and refreshing salad dish to start the meal.  I really liked the pluot and squash combination.

My girlfriend got the kampachi in the bottom picture.  For a price, you can add uni to it, which we did.  Of the bite I took, I really liked it, although I felt the balance of pickling and fish was a bit too strong towards the pickling.  However, I was given the last piece of the fish, so perhaps it had sat a bit too long in the juice by that point. 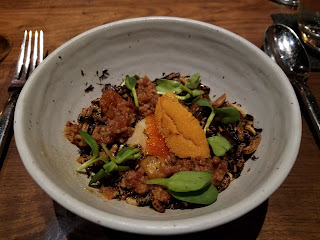 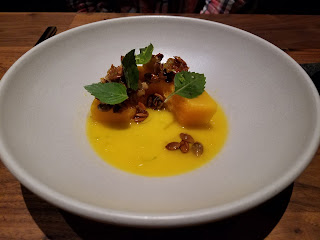 Last time we were here my girlfriend got the soft cooked egg.  Of the one bite I took I thought it was delicious so I decided I couldn't pass on it this time.  I also added uni into this dish.  This dish was was tasty, really hearty, and had some nice contrasting textures.  My only knock is that after 5 or 6 bites, it seemed to be "too much" heartiness.  This item would have been great on a tasting menu, perhaps smaller with a quail egg instead of a full hen egg.

My girlfriend got the squash in the bottom picture.  Of the bite I had, tasty, especially with the yuzu citrus sauce. 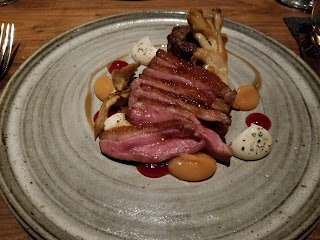 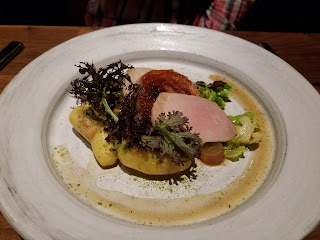 I got the duck dish in the top photo.  The duck breast was cooked sort of medium rare.  A bit more cooked than the duck at La Folie but a little rarer than the duck at Keiko a Nob Hill.  Overall I enjoyed it, but liked the duck at Keiko a bit more because I prefer it a bit more medium.  The sauces were interesting, although I wish there was a "strong savory" type sauce amongst the three.  The sauces tended towards the "light" end.  In the back was a roulade of duck that the waiter suggested I end in one bite because it was a really strong duck flavor.  He was right, it was really really rich.

My girlfriend got the pork dish on the bottom.  It includes some pork tenderloin and a roulade of pork belly.  Of the portions I tasted, all of this dish was delicious.  The pork was tender with strong flavors.  Our initial reaction was we both enjoyed this pork better than the one at Gary Danko. 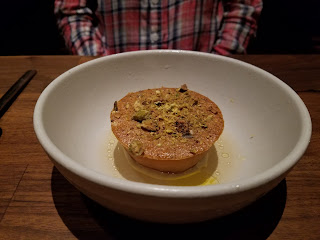 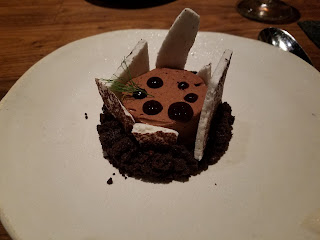 I had the poached pear dish in the top picture.  The pistachios are on top with a crunchy top and a cream (possible bavarois?) beneath it.  Overall, delicious, loved the flavor combinations and the texture differences throughout.

My girlfriend had the frozen chocolate dish in the bottom picture, which was sort of a frozen chocolate mousse kind of item.  It was surrounded by these soft wafers and there was a huckleberry sauce beneath.  Just like the poached pear, a lot of great flavors and textures together.

Overall a nice meal at Aster although I enjoyed the first meal better as the tastes aligned more with my personal tastes.  That's sort of the risk of going with the price fixe menu and the random items they have that day.
Posted by Albert Chu at 6:16 PM