Recently I had a chance to eat at Rasa in Burlingame, CA.  It was recently named by Michael Bauer of the SF Chronicle as his favorite Indian restaurant in the bay area.  It was also awarded a Michelin Star last year.

Unlike most many Michelin Star restaurants, Rasa is on the casual side of the restaurants.  It offers just an a la carte menu, so you won't find a tasting menu or price fixe menu here.

The menu is divided into "small plates", "uthappam", "dosa", and "entrees".  We decided to get an "uppatham" as  an appetizer because we'd never had it before and then get two entrees.  The staff brought out each one individually for us to share. 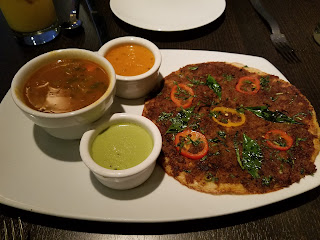 We both had never tried an uthappam before so we decided to try it out.  Overall, I loved this dish.  It had a lot of flavor to it.

It came with a lentil soup & two chutneys.  The red one at the top was a tomato based chutney and the green one was a coconut one.  I first reaction when trying the chutneys was "they have a lot of flavor".  Much better than the somewhat bland ones from most Indian restaurants. 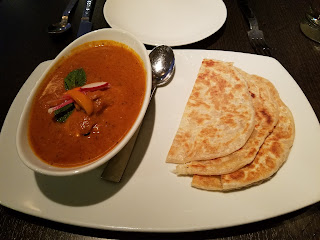 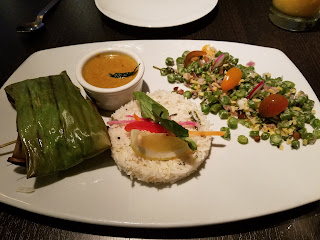 This entree looked interesting so we decided to check it out.  It comes with an onion sauce which you see at the top.  I had to look up what "foogath" is, but it is apparently vegetables with curry and coconut.

Here's a picture of the fish once we got it out of the banana leaf. 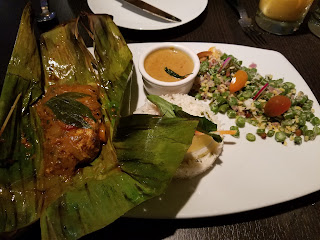 Overall I thought the dish was pretty good although the flavor wasn't quite as strong as I would have liked it.  I did love the green bean foogath.  I think this would be an excellent entree dish to have by itself for dinner, since it has a bit of everything (fish, rice, vegetables).

At this point in the meal we were quite stuffed and couldn't finish everything.  Unlikely most fancy "Michelin Star" fancy restaurants, this wasn't a series of small dishes coming out one at a time over hours.  These dishes came up semi-fast.  IIRC, we got this entree just a few minutes after we finished the butter chicken.  So we decided to just get one dessert to share. 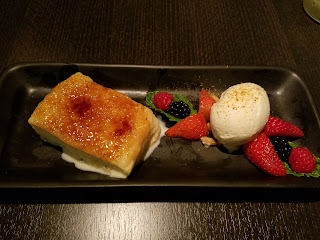 This dish was really interesting and really tasty.  The bread putting was caramelized on top just like creme brulee.  Overall, it was delicious.  Add in the vanilla ice cream and berries, overall wonderful.

Overall, the meal at Rasa was quite good.  I think a little better than the one at All Spice we had a few years back.

In hindsight, I think the uppatham and two entrees was a bit too much food given the pacing the restaurant brought out the dishes.  I think it would have been better to order a small plate or two, an uppatham or dosa, and an entree.  I think the portion size overall would have been much better.
Posted by Albert Chu at 10:39 AM