My girlfriend and I were going to be in the city for a get together and needed to get dinner beforehand.  Something somewhat more simple than the fancier places I normally cover.

I noticed that Trestle was really close to where we were going, so we were lucky to be able to snag reservations on short notice.  I first heard of Trestle via the San Francisco Chronicle's Top 100 Restaurants list.  It's somewhat known for having a very affordable price fixe meal, just $35 for a three course meal.  You get to choose between two items amongst an appetizer, entree, and dessert course.  If you want to add $10, you can get a pasta course too.  Here's an overview of what we got. 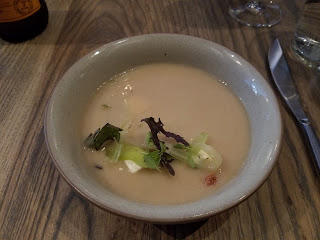 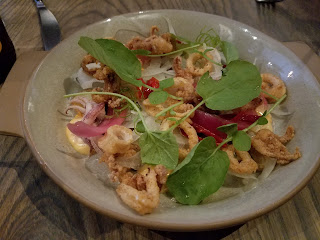 I got the bean soup at the top and my girlfriend got the calamari potato salad on the bottom.  I'm not a huge fan of beans, but the bean soup was pretty good with the pesto.  The feta cheese was particularly good.  I'm not sure what it was marinated in, but there was something special with the feta (I think it was a sweet note, but I can't remember exactly b/c I didn't write down any notes).

The most interesting thing about the potato salad was that it wasn't "chunks" of potato like you would normally think.  Instead it was "shaved".  Light and refreshing of the few bites I tried. 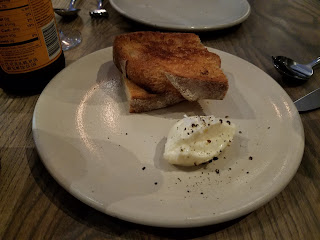 We forgot to ask for bread in the beginning of the meal.  You have to ask otherwise they don't bring any out for you.  So remember to ask!  Bread was fine, not a bread I would consider very memorable. 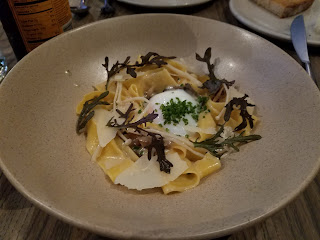 Because we were going to a party afterwards, we decided not to try both of the extra pasta dishes and just shared this one pasta dish.  We made the right choice, as this was our favorite dish of the night.  The soft boiled egg turned sauce was delicious. 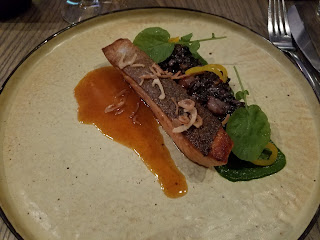 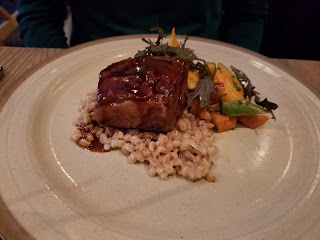 I got the salmon on the top.  I'm not a big fan of salmon, but the salmon above was delicious and perfectly soft in the middle.  Lobster emulsion sauce was delicious.  I probably could have done without the black rice, not my favorite flavor.

My girlfriend got the short rib below.  Of the bit I tried, it was fine.  But I'm not the biggest fan of that particular cut of meat. 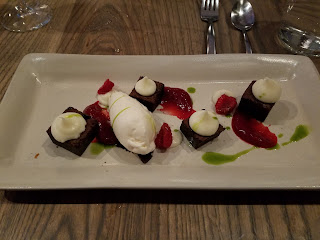 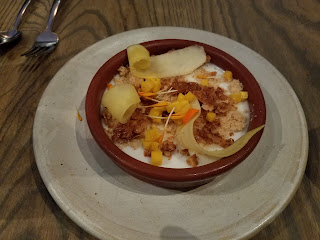 I got the brownie dessert in the top picture.  Overall, quite tasty, although I would have preferred the brownies to be a bit sweeter.  I think the rasberry sauce was particularly good.

Of the few bites I had of the panna cotta, it was pretty good.  I'm not the biggest fan of coconut flavor, so not sure how I would feel about eating an entire dessert of it.

I really enjoyed Trestle and would totally come back soon.  For just $35, it's a steal amongst the pricier dining options in the city.   The most comparable restaurant I could think of to Trestle was Aster, which we went to earlier this year.  Aster is $59 (without bread) for 4 courses.  So if you get the pasta course at Trestle, it's $59 vs $45 dollars for 4 courses.  That's a steal for such a good meal.  However, I would say that the dishes at Aster are more interesting and are totally worth the extra $14.

The meal took a very quick 1 hour and 15 minutes from the time we sat down to the time we left.  While the portions aren't the largest, the quick turnaround on dishes made sure we were stuffed by the end.  We were quite surprised.  It was even faster than our meal at Aster which clocked in at 1.5 hours.  With a smaller menu, I'm sure Trestle is able to pump out dishes from the kitchen just a bit faster.