Ad Hoc is the far more casual restaurant from the people behind French Laundry.  Apparently the story is that the head chef of French Laundry wanted to create a burger restaurant in a new location they acquired.  Before they were ready to open their restaurant, they kept the location busy by offering casual family style dinners.  The concept was so popular they ended up just keeping the format and put the burger restaurant on the back burner.

Ad Hoc offers a daily four course set meal, an appetizer/salad, a main course, a cheese course, and a dessert.  Everything is served family style except for the dessert.  So keep in mind the portions are for two people in most of the pictures below. 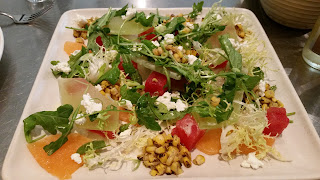 First we had a melon salad, with watermelon, cantaloupe, and honeydew sprinkled in.  This was really tasty and refreshing.

My date and I actually spoke of how the melon was so good and you just can't get fruit this good from Safeway or your average supermarket. The table next to us asked the waiter how the melon tasted so good.  The waiter said that they used a sous vide technique to effectively infuse the melon with the juices from other melons.  So it ends up that not only can you not get fruit this good from a supermarket, you can't get it at all!  It can only be concocted in a kitchen. 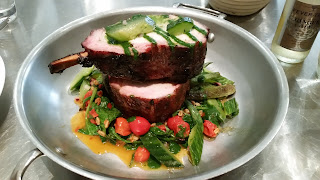 Next up up we some pork chops.  I'm usually not a fan of pork chops, as I always consider it to be too dry.  Ad hoc did a great job and it was quite juicy in the middle.  The vegetables, especially the romano beans and cucumbers, were especially delicious.  While the pork chop in the picture looks gigantic, it's not quite as big as you might imagine.  It's a very good/nice sized pork chop but not too much you can't finish it. 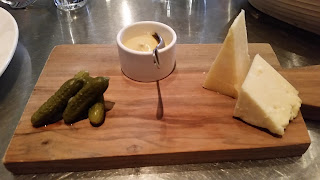 Next up was a cheese course.  This cheese was really really rich and creamy, it was hard to eat all of it.  My date & I gave up with about 1/2 of a chunk left over from the two original chunks.  One table over from us, the couple ate only about half of one of the chunks and that was it.  I think one "cheese chunk" would have been good enough for the both of us. 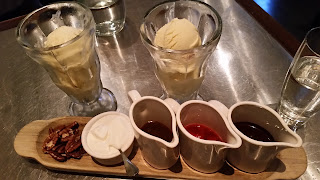 Finally a do it yourself ice cream sundae was served for dessert.  The various sauces appeared to be made in house and were delicious with what was likely house made ice cream.

Overall a delicious casual meal.  The portion sizes were overall good.  Not too much and not too little.

As of this writing, the four course meal is $52 before tax & tip.  I think this is a great deal.  At other restaurants of this quality, it could easily be $70-$80 for the four courses.