About 4 years ago I was able to try The Progress, the newly minted sister restaurant to State Bird Provisions.  The restaurant hadn't yet found its way, initially serving a 6 course, price-fixe, family style meal.

Nowadays, the restaurant serves a general a la carte menu, with almost everything to be served family style.  The updates eventually earned the restaurant a Michelin Star in 2017.

So we decided we wanted to check out the restaurant again.   The menu features several large platters that can be shared between 2-6 people, but we opted for more of the smaller dishes to try more food.  Here's what we got. 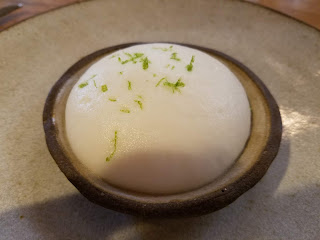 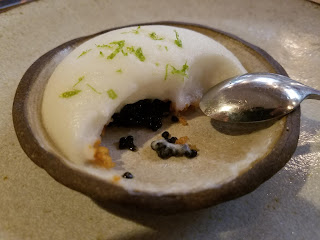 First up we got this tiny appetizer.  It's sized at about the size of an oyster course, so you'd want to order one per person.  There's potato foam on top, some crunchy fried potato bits below, and ultimately caviar on the bottom, which you can tell in the second picture.  My first taste reminded me a lot of french fries.  This dish was ok, not my favorite caviar course I've ever had.  I think the recollection of french fries didn't mix well with the caviar. 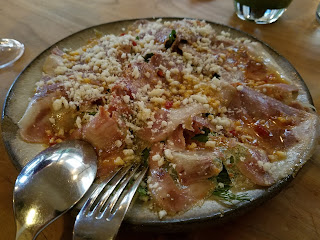 Second up, we had what might have been my favorite course of the night.  While you mostly see the charcuterie on top, beneath was (what I believed to be) shaved fennel, mint, cilantro, and slices of serrano peppers (and possibly other herbs that I missed).  On top was a sprinkling of puffed rice.  Overall, just a wonderful mix of flavors, textures, and that occasional hit of heat from the peppers.  A part of me wondered if this could be made bigger, like in to a entree salad, but I think this was about the right size.  You couldn't really do more than this. 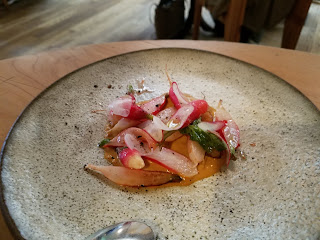 To be honest, for $8 I felt this was sort of a rip off given the amount of food.  It's around maybe 7-8 small radishes.  The garlic aioli-ish sauce was good, but it just seemed like so little and I'm not sure the texture of the radishes really went well with the sauce.  Something crunchy in addition, perhaps some potato crisps or even deep fried radish, I think would have been much better. 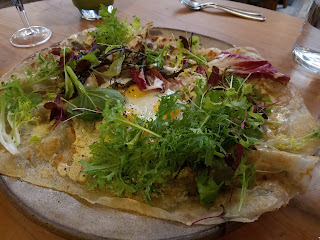 This roti dish is a pretty popular dish in the restaurant.  We saw tons of tables order it.  This may have been the other challenger for best course of the night.  In some ways it's really simple.  It's roti, with greens, eggs, and cheese.  The combo of flavors and textures was just delicious.  Like a much better version of a breakfast burrito (crispy/buttery roti instead of plain burrito wrap, soft cooked quail eggs instead of scrambled eggs, and mixed greens for contrast).  I told my +1, they should try and turn this into some upscale breakfast burrito to be served out of a food truck.  They'd sell out everyday. 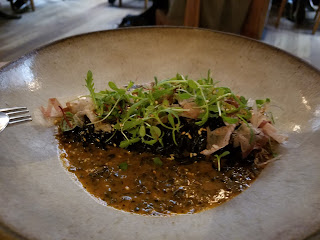 I don't remember too much about this dish, other than the fact it was delicious.  The sauce was really good. 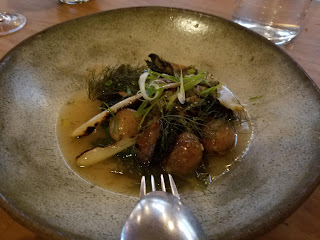 It may be hard to see the bits of abalone nestled in between chunks of potato in the above photo, but they're there.  There were 3 "biggish" chunks of abalone nestled in there.  The abalone was perhaps the most tender abalone I've ever had in my life, just delicious along with the citrus sauce.  I actually would have loved some bread to soak up the sauce from this dish, sort of like with clam juice from a clam bake. 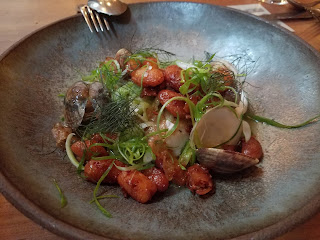 So I actually didn't order this dish.  Some friends at another table did.  They were stuffed and told me they couldn't finish, so I went off to their table to try this dish as well.  You can see the halibut buried a bit beneath the beans and clams.  It was topped with a green garlic salsa-like spread, which may be hard to see in the photo as well.  Overall, pretty good dish, but not my favorite, as I'm not particularly a fan of "meatier" fishes.  I think I may have missed out on some of the salsa as the dish was being divided up amongst us.  I will say that I loved the beans in this dish.  They were fried and had a good crisp on the outside of them. 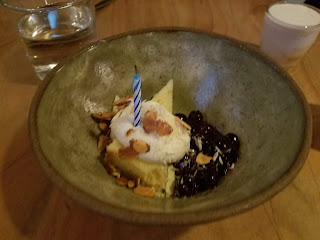 So we had enough room to spare to grab some desserts and I had went with this ricotta cake.  I had never had ricotta cake and didn't know what to assume, I had wondered if it was going to be very "cheese-cake" like.  It wasn't, but it definitely was a bit "denser" than normal cake, which I liked.  I couldn't really taste too much of the ricotta though.  The blueberry compote was delicious and the candied almonds give some good crunch in each bite.  I really liked this dish. 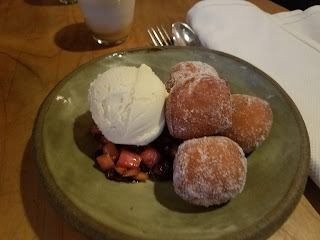 Similar to the ricotta cake above, I didn't know what to assume of quinoa doughnuts.  Once we got them, there was definitely a flavor difference, which I would describe as not-as-plain.  Overall good, but not the kind of the dessert I would order again.  I loved the ice cream in this dish, I think it was a great flavor and matched well with the rhubarb beneath it. 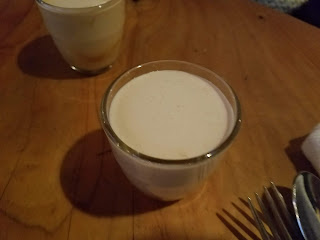 Finally, we got some of this peanut milk complimentary b/c there was a slowdown in the orders earlier in the evening.  It's something that's normally $3 per shot but they gave us two of them.  I'm not a huge fan of peanut flavor, so this wasn't my favorite, but it wasn't too bad either.  It is quite rich, so I wouldn't order one for myself in the future.  Perhaps one to share would be doable.

Overall I felt it was a good meal at The Progress.  Similar to other dining experiences at "gourmet casual" restaurants, there are some hits and misses.  I'm hoping sometime in the future I can go with a bigger group and get one of the family style platters to share.
Posted by Albert Chu at 8:52 PM