While on a trip to London I wanted to check out atleast one well regarded restaurant.  Reservations were tough all around at many famous places (The Ledbury, Gordon Ramsay, The Fat Duck, etc.), however I was able to snag a seat at Dinner by Heston Blumenthal.

Anyways, the restaurant is an a la carte menu only.  You can order appetizers, mains, sides, and/or desserts.  The waiter said an appetizer, main, and dessert was the right amount of food.  We ended up adding one side because we really wanted to try one.  Here's an overview of what we had. 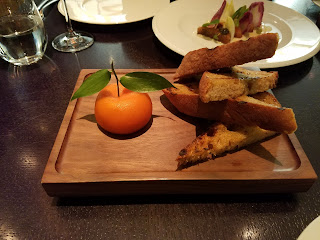 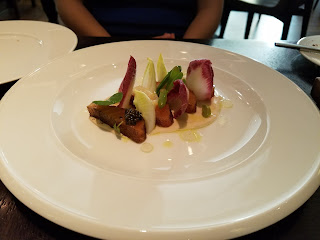 We shared these two appetiziers.  The first is apparently a signature appetizer from the restaurant.  It's a chicken liver and foie gras mixed pate incased in a mandarin gelatin.  Obviously, it's been made to look like a mandarin orange and it looks pretty close (the leaves are not edible).  Here's a picture of what it looks like when you cut into it. 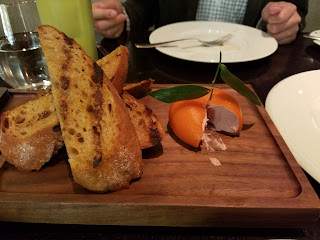 Overall delicious.  At first I thought the gelatin would mess with the texture of the dish (in my head, I was thinking it would be something like fondant).  I figured the gelatin must have been strong enough to hold the mandarin shape.  However, the gelatin was thin/soft and added a bit of citrus hint to the spread when put on toast.

For our second appetizer we had the cured salmon dish.  I'm not the biggest fan of salmon, but this was delicious.  The sauce at the bottom was particularly delicious.  I'm not sure what it was, but I assume lemon was in it as well as the relish b/c it had a bit of pickling flavor.  As you can see in the pic, the caviar was on the salmon. 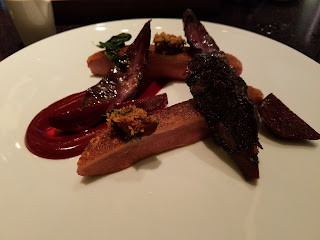 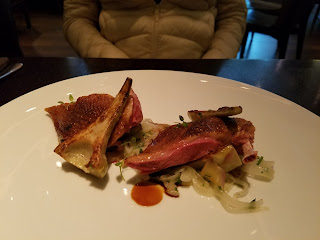 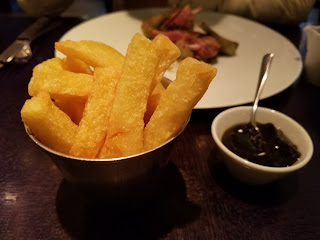 For our two mains we had the duck and the pigeon.  The duck was among the best duck I've ever had.  It was cooked about medium, which is much preferred over rare which some restaurants do.  I was debating if I liked it more than the duck from Keiko A Nob Hill, which up until now is my favorite duck dish.  I had to look up what "spiced umbles" were, but apparently they are internal organs, such as intestines.  I assume it was the stuff on top of the duck breast slices, but I'm not 100% sure.

For the second entree, we had spiced pigeon.  This is one of the best dishes I think I've ever had.  The pigeon was super tender and flavorful, on the verge of barely needing chewing.  As much as I loved the squab from Chez Panisse, this is unquestionably the best squab/pigeon I've ever had.

For our side, we got the famed triple cooked chips from Heston Blumenthal.  They were created by Blumenthal in the 1990s and is now considered a classic dish throughout the UK.  The technique is to apparently boil, freeze, fry, freeze, then again fry the fries (and I'm obviously glossing over details).  The technique gives the fries a moist center and a very crispy thin-cracker-like exterior.  It's unlike any fry I've tried before.  According to wikipedia, Blumenthal calls the outside like "glass".  The description is fair, because the outside of the fry does seem to "crackle" and break with some consistency one would think is like glass.

The chips came with some mushroom ketchup, which was the predecessor to the modern day tomato based ketchup.  You can get tomato ketchup if you want instead.  I loved the texture of the chip, although the flavor at its most basic level was still potato flavor.  I still think the pickle brined frys from Al's Place still beat these out as my favorite fries of all time. 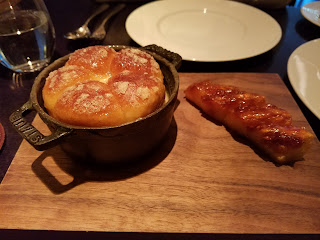 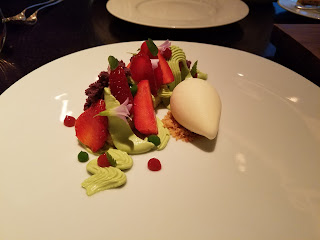 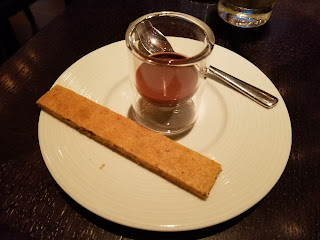 We chose two different desserts to share.  The restaurant also brought out some complementary ganache and a biscuit for us as well.

The first dessert above is apparently a signature dish of the restaurant.  It's a soft/fluffy brioche cake with cream at the bottom.  On the right was pineapple that had been spit roasted.  Overall, quite tasty.  The cake was very soft and fluffy.

The spring tart was our second dessert choice.  The green is the lovage & basil yogurt, which was la mousse-like texture.  It and the strawberries were on top of a cake.  The strawberries were vacuumed with fructose and (what I assume is) rose water.  They were super sweet and had a consistency that made me believe they had been cooked for a short period of time.  Add in the goat's milk ice cream on cookie crumbles, and its one of the best desserts I've ever had.

Overall a delicious meal.  It took about two hours in total time from the time we sat down.  I wish it could have been a tasting menu, as I would have loved to have tried many of the other dishes.