After a stay at Solage in Calistoga, we decided to grab lunch at one other place in Napa before heading home.  We decided to try the famed Bouchon Bistro in Yountville, CA.

Bouchon is the famed casual cousin of The French Laundry.  With this meal, I would have finally finished dining at the Thomas Keller triumvirate of restaurants in Yountville (also includes Ad Hoc).

The menu at Bouchon is classic French Bistro cuisine.  There are tons of appetizers and hors d'oeuvres that you can fill up on, or you can get normal main courses that are quite large.  The waiter said that for lunch, a lot of people would fill up on smaller dishes.  So that's mostly what we did.  We got three small dishes and one entree.  Here's an overview of what we got. 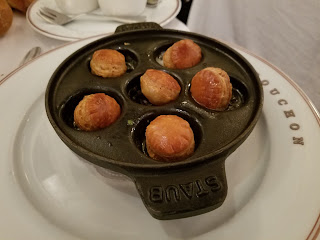 I can't recall if I've ever had snails served like this, with the little puff pastry on top.  I had assumed the puff pastry was going to be on the side to dip into the snail garlic butter afterwards.  Overall pretty good, but perhaps not my most favorite snail dish I've ever had. 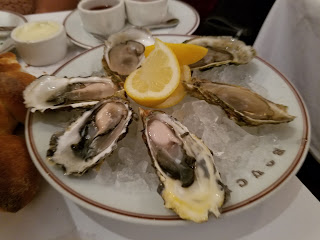 While I was writing this up, I was trying to think "why did we order oysters?"  While good, you can get oysters anywhere.  Shouldn't we have gotten something unique to Bouchon?  Then I remembered.

There are a number of "put on bread" types of dishes that you can get at Bouchon: caviar, charcuterie, pate, foie gras, etc.  You can also dip bread into a number of dishes (such as the escargot above or the mussels below).  So we decided to go with the oysters  to try and mix up our dishes.

They offered two types, California and Rhode Island (IIRC).  I preferred the California ones. 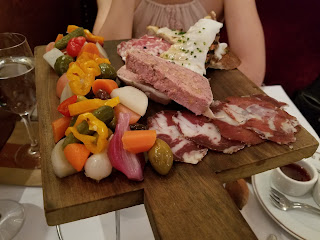 I was pretty surprised when they brought this out.  It was way bigger than I expected.  I'm used to a tiny pile of pickles on the side of a charcuterie plate, but the pickled vegetables on the side was huge.  The variety of the vegetables was also quite large.

As for the charcuturie, there was pate, salami, coppa, and some bread with cheese melted on it (can't remember what kind).  The coppa was particularly delicious.  Both it and the salami didn't have quite the high salt kick you're typically accustomed to compared to store bought.  The coppa was also much "softer".  It's hard to describe.  The pate was also delicious, perhaps the best pate I've ever had. 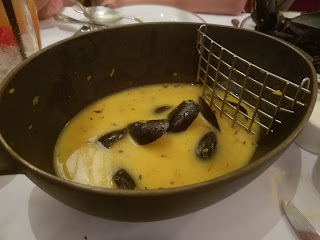 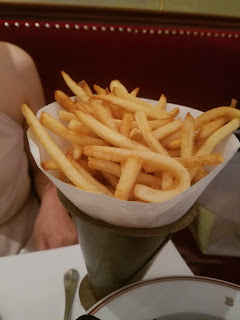 So unfortunately, I forgot to take a photo of the mussels when this bowl was full of mussels.  So just try and imagine it with more mussels in the bowl :-)

Overall, quite good.  The white wine sauce was delicious.  The fries were pretty good.  If you wanted to get just the mussels and fries as an entree, it would definitely fill you up, as there are a lot of fries.

We decided not to get any dessert and instead went next door to Bouchon Bakery and picked up some desserts to go. 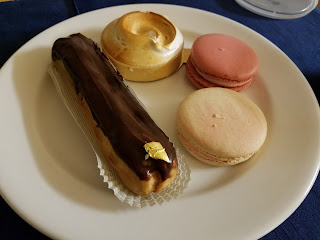 We picked up two macarons (raspberrry and rose), a lemon tart, and a chocolate eclair.

The chocolate eclair was delicious, perhaps the best I've ever tasted.  The lemon tart as well.  Of the two macarons, I enjoyed the raspberry one the most.

Overall, a fun trip to Bouchon.  The one knock I have against Bouchon Bistro is that it is a very classic French Bistro food.  For me, I like to try and taste new and different things that I haven't had before.

While I'm sure dishes such as their steak & frites or their croque madam are delicious and better than many other restaurants, I'm not sure if that's what I necessarily would like to adventure out to get if in Napa.  But if you're more interested in something more casual and familiar, I think Bouchon Bistro is a great place to hit up.
Posted by Albert Chu at 8:16 AM