Delage is a relatively new sushi restaurant in Oakland.  They only offer a 8 course omakase/tasting menu, but it's a very affordable $65 dollars.  The sushi chef there was the former sushi chef from Maruya, which got a Michelin Star while he was there.

So a very affordable omakase from a Michelin star sushi chef in nearby Oakland?  Sign me up.  Here's what the meal looked like. 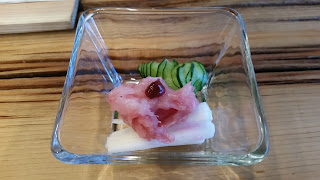 First up was this amuse dish.  Overall, light, refreshing, and tasty.  A good start to the meal. 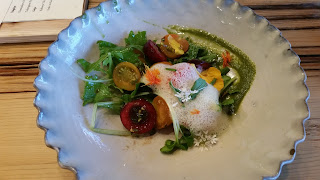 Our first official course was this salad.  The foam you see on the dish is a yuzu foam which was quite citrus-y.  The pesto and ume sauce were delicious. 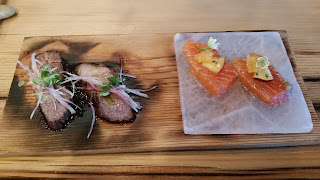 This course above was for both me and my date, so we each got one each of the beef & salmon.  I liked the salmon, as it had an interesting salty-kick after having sat on the salt block.  The beef was ok, not as strong a flavor as I was hoping for. 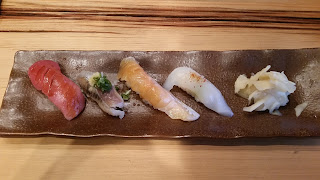 Our next course was four nigiri sushi.  From left to right we have tuna, sardine, iwana (arctic char), and ika (squid).  Overall, all were delicious although I think I liked the ika/squid the most.  In most places I think the squid is a tad tough, but this was really soft and "smooth". 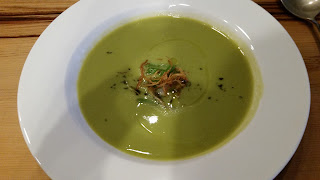 Next up was this asparagus soup.  Overall tasty, although on a relatively cool night I think a warm soup would have been better.  I wouldn't blame the restaurant.  We'd recently gone through a heat wave, who knew this random night was gonna be cool :-)  On a much hotter day I probably would have loved this way more. 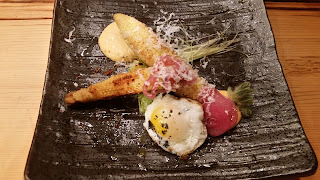 Next up was this interesting dish.  This was not the baby corn I'm used to from Chinese take-out dishes.  The corn was larger and thicker than that, so it was from some variety I'm unfamiliar with.  In addition, underneath it was threads of husk from the corn.  Apparently this variety's husk is soft enough that it's tender enough to eat.  With the aioli, this was delicious.  Probably by favorite non-sushi dish of the night. Next up was this duck dish.  I really liked the plum compote sauce, although with the relatively thin-cut slices of duck I think it overpowered the duck a bit.  If the duck was cut thicker, I think it would have worked out better.  The senmoto negi (green onion) was a bit on the charred side for my taste, but perhaps that's just me. 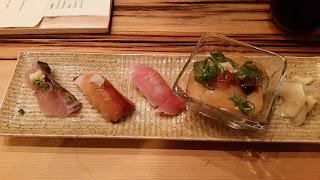 Next up was the second course of sushi.  From left to right we had spanish mackerel, hamachi (yellowtail), snapper, and a scallop donburi.  Overall good although I preferred the first set of nigiri with its stronger flavors.  My girlfriend liked this set better because she prefers the more mild flavors.  So to each their own.  However, we both agreed the scallop donburi was delicious and possible the best sushi/sashimi of the night.  You may have trouble seeing it in the picture, but there are small cubes of soy-sauce gelatin on top that sort of melt/explode in your mouth.  It was really tasty. And finally some ice cream for dessert.

Overall, I was happily full and not too stuffed at the end.  For $65 dollars, it's a relatively good deal for a 8 course omakase meal.  I wouldn't say the meal was as good as Kusakabe, but you're also getting a much better price.

My only knock against Delage on this trip is there was a bit of timing issues in their service.  A few dishes came out cooler than perhaps optimal.  However, I want to be fair to them.  They opened on June 7th, so this is a relatively new place and may be working out the kinks.  This was only their fourth weekend in business and with it being the July 4th weekend, it's possible it was the first time they have been fully booked.  I expect things to be optimized in time.