I happened to be in Honolulu for a wedding and decided I had to check out atleast one nice restaurant in the area.  My girlfriend and I eventually decided we wanted to get some nice sushi in the area and eventually settled on Sushi Sasabune after seeing their great reviews online, their 28/30 rating on Zagat, and (AFAICT before going there) their apparent lack of a menu (i.e. they only serve an omakase meal).

The restaurant is a bit off from the touristy Waikiki but an easy enough drive/taxi over there.  My recollection was in a pretty nondescript strip mall, next to a yarn/fabric store and about a block away from a storage facility .  When the restaurant called to confirm the reservation, they wanted to make sure I understood that this restaurant was  a traditional Japanese sushi restaurant and no tempura or California rolls were available.  I guess they get a number of tourists that wander in not knowing what they're getting into.

The restaurant offers two different omakase menus, one that is "eastern" and one that is "western".  Apparently the latter concentrates only (or mostly) on fish while the former contains more shellfish in the tasting.  The example the waiter gave us was that uni would be in the "eastern" menu.  We ended up going for the "eastern" tasting.

Before going through the photos, its perhaps important to note that at any point you can just tell the server you're done eating.  Unlike most omakase/tasting menus I've had, it's more the sushi chef serving you whatever off of the a la carte sushi menu.  So if you're full, you can just say you're full and they'll stop bringing you food and the bill at the end will be a bit cheaper.  I don't know if this is the way "authentic" Japanese omakase tastings are, but this is what they do here. 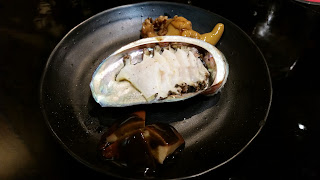 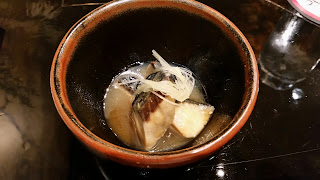 The second course was fish in a miso sauce.  The dish was served cold.  This was an ok dish.

We noticed another table get a calamari dish instead of this.  Unsure if it was because they ordered the "western" menu instead. 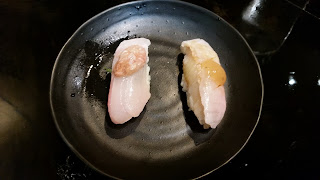 Next up was some red snapper and halibut.  The red snapper had (what my notes said) was a plum sauce on top and the halibut had a sauce I cannot recall.  I think this is a good example of the type of sushi you get a Sushi Sasabune.  There's a lot of sauces and interesting things on top of the nigiri.

I'm not gonna comment on every nigiri as we move on.  I think the pictures are sufficient. 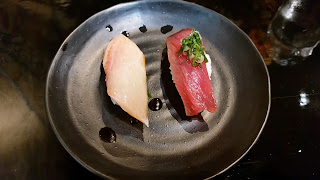 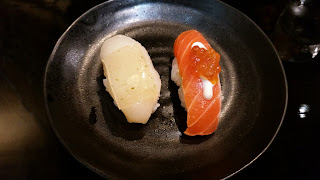 The yuzu gelatin on top of the scallop was a little strong in my opinion, hiding flavor of the scallop.  I found the cream a surprising addition to the salmon, but it tasted really good. 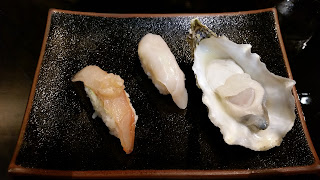 The oyster w/ oyster sorbet was quite interesting.  Before downing the oyster I tasted the sorbet by itself, and sure enough, it is oyster flavored sorbet.  It added exactly what you'd expect, extra oyster flavor to the oyster.  The geoduck was particularly tasty.  The shrimp wasn't sweet shrimp, which surprised me because that's the only raw shrimp I've ever had prior to this. 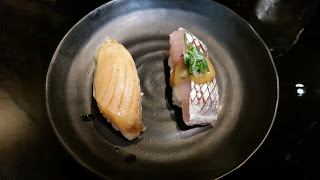 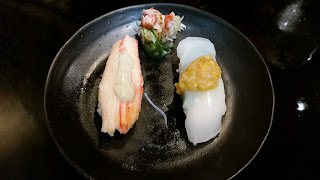 I found the addition of uni sauce on top of the squid quite interesting. 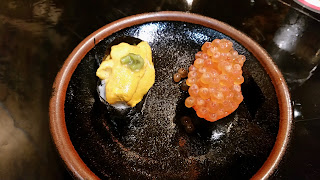 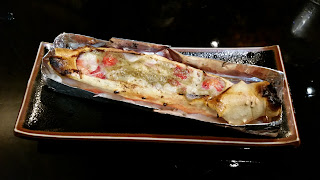 A table close to us that also got the "eastern" menu got lobster instead of king crab.  Unsure why, perhaps it was a request of theirs. 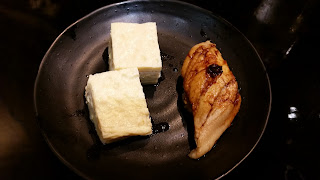 The anago was quite interesting, not the normal barbecue drenched unagi eel you usually get. 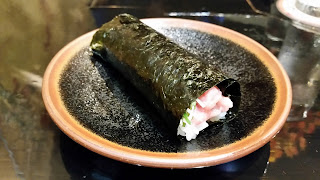 Negitoro is apparently one of this restaurant's signature dishes.  We probably should have asked them to only serve us 1 negitoro roll which we would split, but we didn't.  The roll was fine, but my judgement may be flawed because I was getting stuffed by this point. 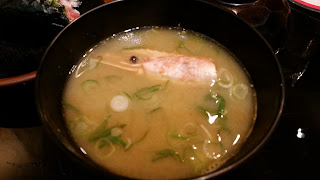 The miso soup contained a shrimp head, which I assume came from the shrimp nigiri earlier in the meal.  The flavor of the shrimp was clearly in the broth.  I really enjoyed this, as it was different from the normal miso soup you get at most Japanese restaurants. 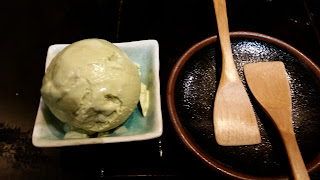 Unlike most other tasting menus I've had, the pacing of the food was quite quick.  The food came out one right after another, so there wasn't a lot of time to let previous courses digest a bit.  The first 10 courses were done within an hour and a half easily, maybe it was closer to 11-12 courses.  Only by eating slowly on the last few courses did we stretch this out closer to 2 hours (but still under 2 hours total).  I've been told that sushi in Japan can be very rapid pace.  I don't know if this is like what you'd get in Japan.

Overall a great experience.  The only other high end sushi place I have to compare to is Kusakabe in San Francisco, which was 1 Michelin Star at the time of my dining.  I think the individual nigiri was better at Kusakabe and I might lean to Kusakabe for the overall better balanced meal with different dish types and a slower pace.
Posted by Albert Chu at 7:14 PM